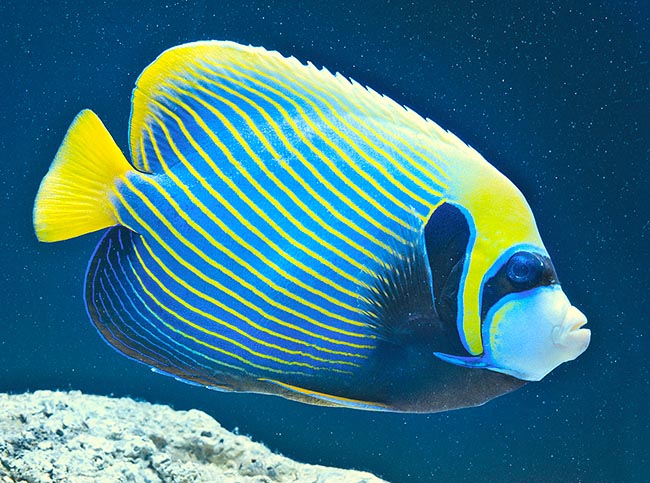 The Pomacanthus imperator Bloch, 1787, commonly called Emperor angelfish, belongs to the class of Actinopterygii, the ray-finned fishes, to the order of Perciformes and to the colorful family of Pomacanthidae.

The name of the genus comes from the Greek “poma” = cover and “akantha” = spine, with reference to the spine on the operculum.

The name of the species “imperator” means in Latin emperor, with reference to its majestic appearance.

It is at home in the tropical waters of the Indo-Pacific.

As an indication, we find it along the entire African coast from South Africa and Madagascar up to the Red Sea and the Arabic Sea, to the Seychelles, Mauritius, Réunion, Maldives, in India, Sri Lanka, Christmas Island, Thailand, Malaysia, Australia, Indonesia, Micronesia, New Guinea, New Caledonia, Philippines, Taiwan and China up to southern Japan. Eastward, it has colonized Kiribati, Samoa, Tonga and the Hawaii, but not the Marquesas Islands. Southward, it reaches the Lord Howe Island, but not Easter Island. It has been introduced in Puerto Rico.

It lives in the madreporic formations up to 100 m of depth. 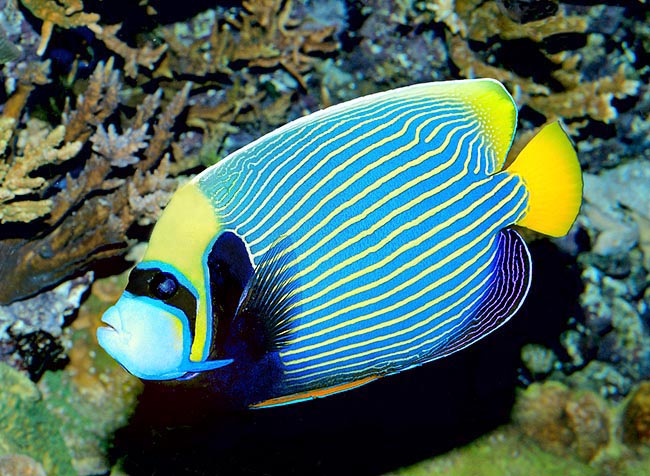 The snout is pale blue surrounded by a blue edge which prolongs on the opercular spine and reappears on the head, after the dark band hiding the eye.

The front is yellow with greenish shades and the area close to the pectoral ones is dark blue, almost black like the low ventral part, surrounded by the usual blue edge. But the peculiar feature, which leaps to the eye, is formed by the numerous yellow stripes, on turquoise blue background, that cross the body.

The juveniles do have a completely different livery. They are wholly blue, with clear patterns getting concentric towards the tail, and get progressively the look of the adults starting from the 10-12 cm.

The juveniles live in small schools in the shallow waters of the more sheltered zones of the reefs, whilst the adults, solitary or paired, venture along the outer ridges. They nourish of sponges, ascidians, various benthic organisms and seaweeds they cut with their jagged teeth. They have been sometimes seen cleaning from the ectoparasites big fishes like the ocean sunfish. After the fecundation, the eggs are entrusted to the currents.

The emperor angelfish is much fished for the aquaria market. The populations might double in 1,4-4,4 years, and the diet, being varied, protects them against the climate changes, but, nevertheless, even if the situation is not yet serious, it has a rather high vulnerability index of 50 per 100.