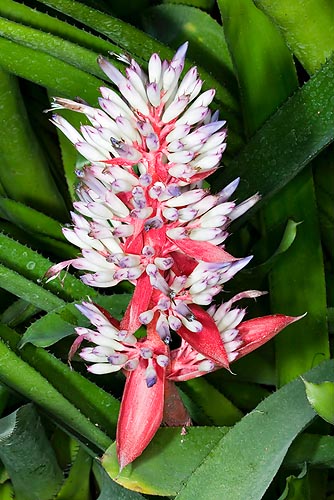 The Portea petropolitana (Wawra) Mez (1892) is native to south-eastern Brazil where it grows on rocks and along the coasts on sandy formations.

The genus is dedicated to the French naturalist and collector Marius Porte (†1866) ; the name of the species “petropolitana” = of Petropolis, refers to the Brazilian city which has been imperial seat.

Evergreen herbaceous plant, monocarpic (bearing fruit only one time during its existence), acaulescent, terrestrial or epiphytic, it has a funnel-shaped rosette, wide up to about 80 cm of diameter, of numerous leaves placed in way to form a central cavity usually full of water.

The leaves are linear, rigid, ascending, of a bright green colour, long about 1 m and 3-4 cm broad, with a rounded apex furnished of thorn; the edges are curved and with thick thorns, about 6 mm long and of a brown colour.

The inflorescence, at the centre of the rosette, is formed by the floral scape, 70 cm tall, of a yellowish-green colour, covered by imbricate bracts longer than the internodes, which ends with an erect inflorescence formed by a compound raceme, that is, formed by more racemes departing from a central axis, tall about 40 cm, with pink pale central and lateral axes.

The bracts, under the single racemes, are salmon-pink, with a decreasing length from the base (10 cm) to the apex (1 cm); the single flowers, on a 2-4 cm long peduncle, have 15 mm long sepals, of a lilac colour, thorny at the apex, and 3 cm long and 5 mm broad petals of a lavender colour, which gets more intense at the apex.

The fruits are dark purple berries. It reproduces, besides by seed, by vegetative way through the new plants which come out at the base and which can be detached when they have reached a size equal to one third of the mother plant.

Very ornamental plant, and of great landscape effect, due to its compact vegetation and the showy colour of the long inflorescence which lasts for some months, it is cultivable in open air in the tropical and humid subtropical climates, both as epiphytic, but mainly as terrestrial, to form edges and flower-beds, on very aerated, porous, draining and rich of organic substance substrata, in full sun or slight shade. Its cultivation can be tried also in the warm temperate climates, in sheltered position, as it can stand, for short time, temperatures around the -4/-6°C.

It can be cultivated in pot for the decoration of ample and luminous spaces, on substrata with the same characteristics foreseen for the cultivation in open air, kept constantly humid in summer, and with high local humidity.

In presence of dry air and high temperatures, the humidity, if it’s the case, can be increased with nebulisations, utilizing water at room temperature and not calcareous in order to avoid anti-aestethic dots on the leaves.

In summer, some water can be left in the central cavity formed by the rosette of leaves, renewing same frequently, thus to avoid it becomes a mosquito larva nest, whilst in winter it is better to leave it dry for avoiding possible rottenness.