The name of the genus comes from the “prion” (saw) due to its serrated teeth, whilst the specific one glauca comes from the Latin “glaucus” (of light blue colour) and it is rightly this light green blue colouring that gives it the Italian name of “Verdesca”.

It is present in all temperate and tropical waters of the Planet. 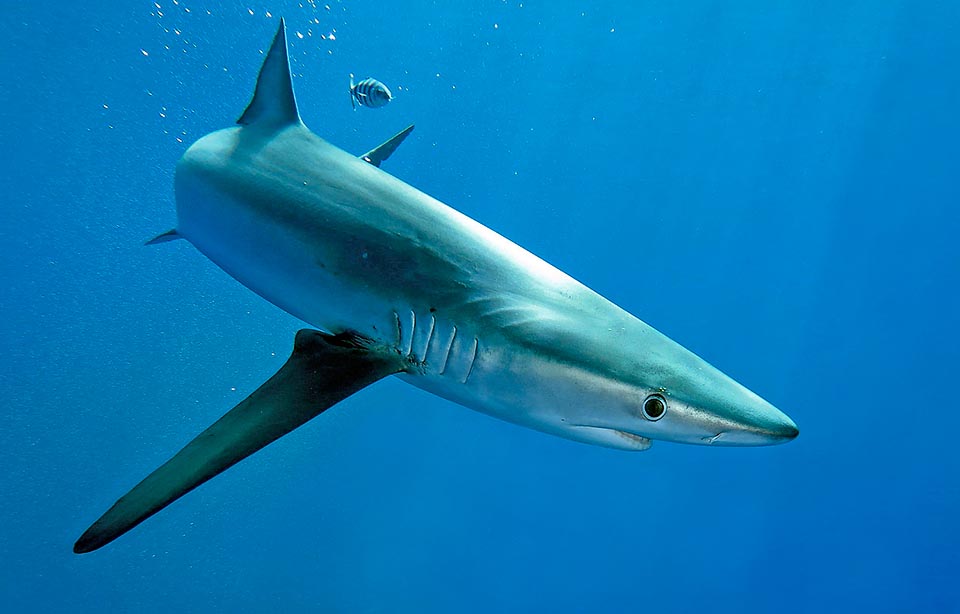 The blue shark (Prionace glauca) is a cosmopolitan shark, easy to recognize from the big falciform pectoral fins. It may exceed the 4 metres of length. Absent only in waters with temperatures under the 7 °C, it often swims off the coasts in a depth range going from the surface to little more than 300 m © Sebastiano Guido

It usually lives off the coasts, in a depth range going from the surface to a little more than three hundred metres. However, it seems that some specimen have been fished even at 1000 m of depth. It is completely absent in waters with temperatures of less than 6 °C.

The average dimensions of the adult specimens vary between the 1,8 and 3,5 m, even it have been reported specimens of more than 4 m. The females are bigger than the males and their skin is much thicker (up to three times) in order to protect them better from the bites with which the males hold them during the mating. The head is very tapered with one of the highest penetration coefficients in the fish world. 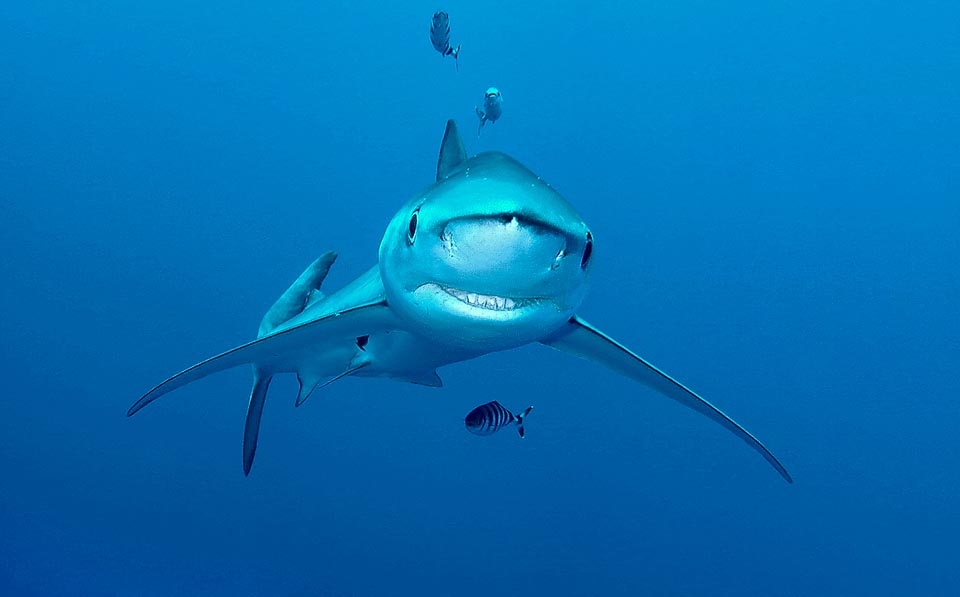 The mouth is not particularly big or menacing but has several rows of teeth to replace those of the first line, lost hunting or in the normal alternation © Sebastiano Guido

This characteristic, along with a slender body a long upper lobe of the caudal fin allows it, with little effort, to make extremely rapid springs or to swim at remarkable speed even though it looks almost motionless.

The eye, with nictitating membrane, is of deep black colour with a thin white edge. The mouth, even if extroflexed, does not look particularly big nor threatening. It is rich, like all carnivorous sharks, of several rows of teeth, the first one, erect, is ready to the offense, whilst the remainder of the teeth placed behind the former has every tooth parallel to the palate and ready to raise in substitution of those of the first row which are lost while hunting or for normal alternation.

It eats oily fish, cods, hakes, small sharks, mackerels, squids, privileging the specimens that due to age, diseases or wounds do not cause a waste of too much energy © Sebastiano Guido

The equipment is completed by two extraordinary pectoral fins, of falciform appearance that for their elegance and imposingness allow to recognize this fish at first sight. Their function is that of depth rudders that sustain and allow the shark to glide. In fact, having no swim bladder these selachians would sink, despite having an enormous liver that with its specific weight lower than that of the water helps them in maintaining them high. The body ends with a heterocercal tail with the upper lobe four times longer than the lower one.

It is a very curious fish, not at all shy, that loves to observe the news close, such as the divers it meets during its wanderings. This does not mean that it is aggressive; it is simply a fish of a discreet size that gets close to what may appear palatable (as the rest of the sharks of the same family) and at times it may try a taste just to satisfy its own curiosity. 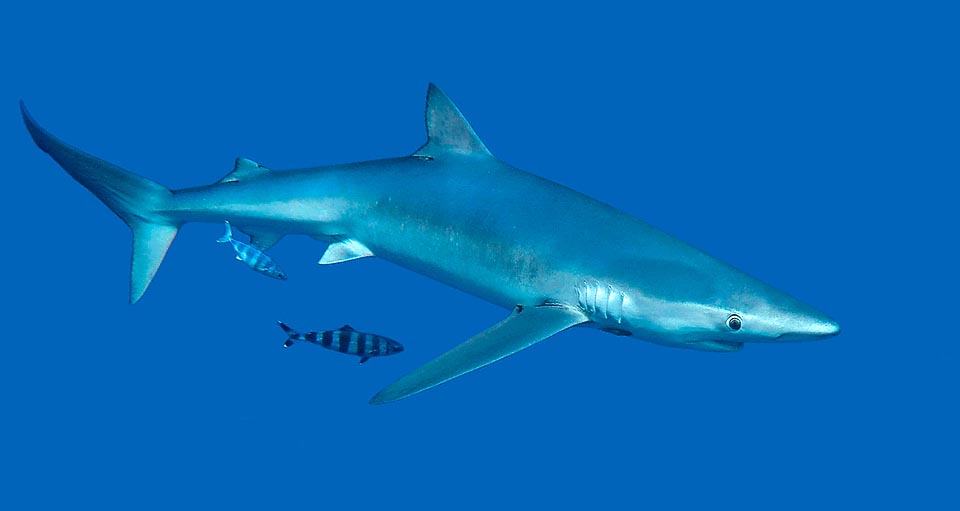 The head of the Prionace glauca is very tapered with one of the highest penetration coefficient in the fish world. This characteristic along with a slender body and a long upper lobe of the caudal fin allows with little effort to do dashy sprints or swim at considerable speed even if appearing motionless © Sebastiano Guido

The reactions of facing it or pushing it away when getting too close and maybe protruding the mandible, most of the time are sufficient for a diver for removing from this shark further curiosities.

It feeds of oily fish, cods, hakes, small sharks, mackerels, squids, favouring those specimen that for age, diseases or wounds provide it an adequate feeding without wasting too much energy. However, it does not disdain also carcasses of whales, some aquatic bird and whatever moves at sea and is not intimidating. Therefore, however, it may be fatal to victims of shipwrecks who, after repeated approaches, if they do not notice its presence or do not induce it to believe that they are dangerous, undergo some test bite. After the first tastings the fish might very well not appreciate them and desist, leaving however the victim bleeding to death. 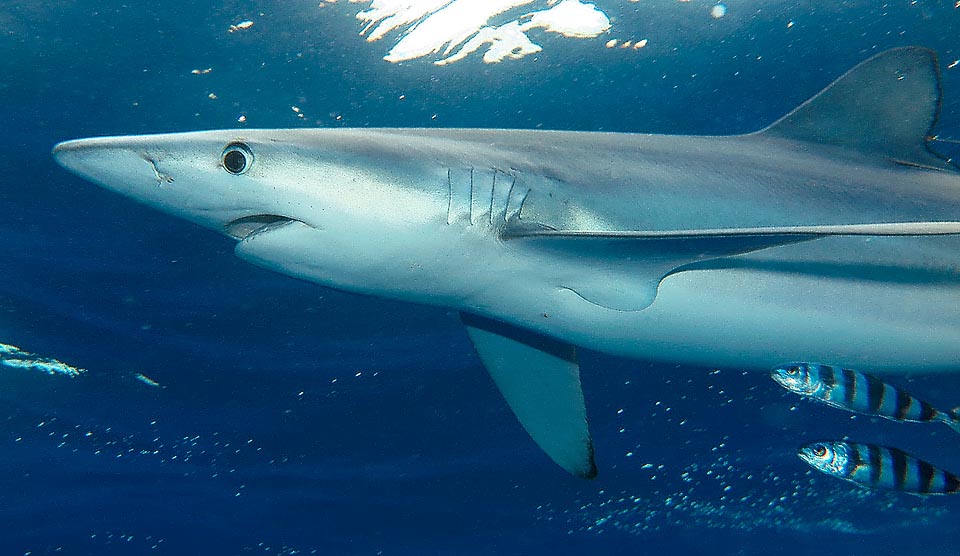 The female, ovoviviparous, is bigger than the male, with a skin even at times three times thicker, to support the partner’s bite when holding her for the mating © S. Guido

After the mating and a gestation that may reach the twelve months, the female of the Blue shark, ovoviviparous carries in body a variable number of eggs that may slightly exceed the hundred. At the hatch and after the expulsion of the newborn, this will begin its pelagic life that will lead it, fortune permitting, to become that superb specimen of living Ferrari of the seas.

Like all sharks, the population is abruptly decreasing. The resilience of the species is very low, seen that are needed at least 14 years to renew the populations decimated by the events, and consequently the vulnerability index is very high, marking nowadays (2017), 77 on a scale of 100. This decline of presences is mainly due to the barbaric practice of the “shark finning”, that consists in taking the fish, amputate the fins and throw it again to the sea, still alive, where it will encounter a miserable end. In fact, the value of the meat is poor whilst the fins are very much sought for in Far East to prepare soups and aphrosidiac dishes. Throwing in water the body of the animal, the fishing boats have more room available where to place the fins, thus rendering far more lucrative the long sea trips. 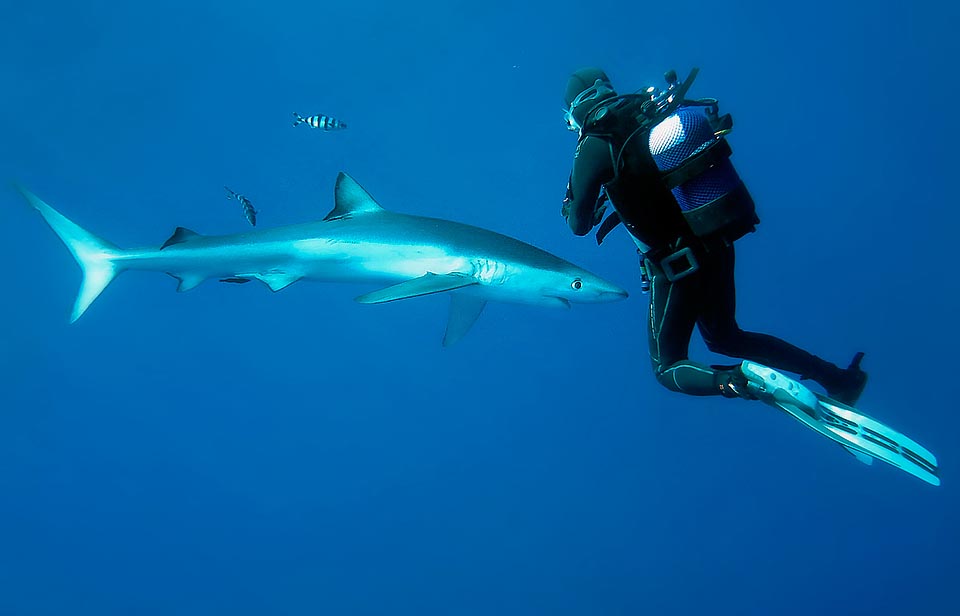 Close meeting. The blue shark is a very curious fish, easy to scare off. The real predator is rather the man that mutilates deadly this shark for the fins, stupidly sought for in Far East for soups and alleged aphrodisiac dishes. The resilience of the species is very low and nowadays it’s a vulnerable species © Sebastiano Guido

Curiosity: Oppian of Cilicia, in his poem “The cynegetis and the halieutica” written in honour of Caracalla, affirmed that the young sharks of this species in case of danger where hosted in the mouth of the parent until the end of the alarm: “As the glaucus does, that its progeny on the oviparous all loves and fondles until when they get out from the egg, always motionless. Then always goes after them, and when sees them trembling due to a voracious fish wide opens the mouth, and receives them, and when the alarm is finished rejects them”. Nowadays, the modern research has however denied such parental attitudes.