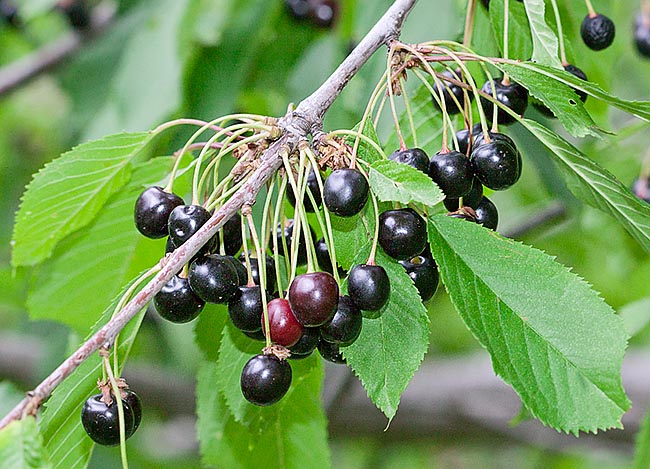 About the origin of the cherry, the Prof. Sandro Pignatti writes in his monumental opus Flora d’Italia (Italian Flora) of 1982: “It is impossible to precise today the native range of the cherry, which seems to have had its centre in the Pontic area (from Caucasus to the Balkans), but which by sure reached the Central Europe already in the late Glacial. The European populations simply collected the sour berries in the wood, whilst the plant refining and its cultivation seem to have begun only among the peoples of western Asia”(omissis).

The status of plant spontaneous also in Europe is certified by findings in the archaeological excavations done in 1853 in Switzerland along the banks of the Neuchâtel Lake, in Constance, in Geneva, etc., conducted by the palaeologist, entomologist and professor of botany at Zurich University, Oswald Heer, thanks to a particularly dry summer, during which they found around the stilts thousands of cherry stones. Afterwards, also the French Mortillet found a great station of stilt-houses on the banks of the lake of Bourget and found other fossil remains of the same fruits. The name of the genus “prunus” is very old and comes from the Greek “prùnon”= prune, plum, that is, the fruit of the prune tree; other Authors are inclined for an older Asian origin. The Latin name of the species “àvium” means “of the birds” consequently, a plant with fruits appreciated by the birds.

The genus Prunus includes more than two hundred species native to the northern hemisphere of the world, in the temperate zones (about twenty in the European flora), with evergreen foliage as well as deciduous, mostly with alternate, simple leaves, with white or pinkish flowers merged in corymbs or in racemes; the fruit is a drupe, with fleshy pericarp (pulp) and woody endocarp. 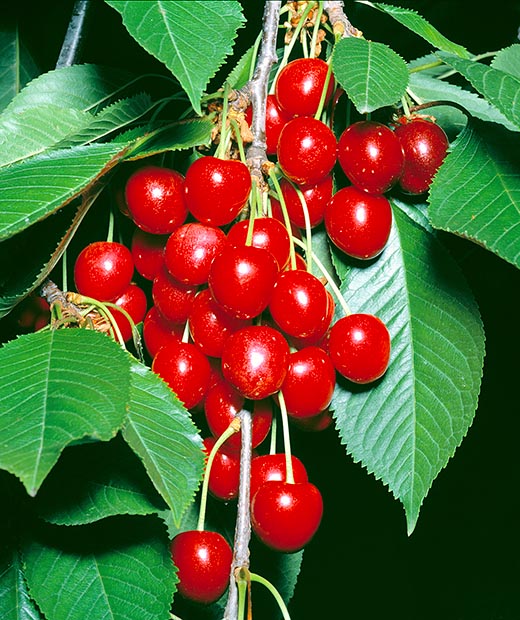 Besides the species of this genus amply cultivated for the fruits (Peach tree, Sour cherry, Apricot, Almond, Plum, etc.) several other exotics have been introduced as ornamental flower plants, particularly from Japan, where, since thousands of years the people has a sort of admiration for these trees.

The wild cherry (Prunus avium L. 1755) is a fast-growing deciduous tree, with sparse and expanded adult crown, ovoid or ovoid-pyramidal, 10-20 (less than 30) metres, with regular cylindrical trunk, well defined, with semi-horizontal to ascending series of branches, with glossy bark, reddish brown to grey-violaceous to grey-slate or dark brown with the age, which gets superficially in coiling transversal stripes.

From the wounds in the trunk and in the branches exudes a secretion of translucent resin of orangey colour recalling the amber. The fresh wood smells like apples. The rooting system if tapering, deep, much ramified.

In autumn the leaves get beautiful shades varying from yellow to orange, to dark red.

The flowers do appear from April to May, 2-6, in showy sessile umbels, with five white petals, obovate-emarginate (9-15 mm), 5-sepals calyx with segments that bend backwards after the flowering.

The fruit (cherry) is a drooping, 1-3 cm, drupe, ovoid or heart shaped, more or less dark red, with sweet or sour pulp. The cherry is a tree considered as noble due to the quality of its wood, hard, heavy, fine in texture, with whitish laburnum and pink-yellowish to pink-brownish duramen, easy to work and to polish; it is highly sought for musical instruments, marquetry works, rulers and set squares, toiletry items, fine furniture and kitchens (it does not get oily), and is also an excellent fuel.

It is not a very long-lived tree, reaching 60-80 years and rarely exceeding the century; it grows in the broad-leaved woods on sub-acidic soil, and along the margins of the fields, cultivated around the villages and often sub-spontaneous (the seed is spread around by the birds who eat the pulp) from the plain up to 1500 m of altitude. 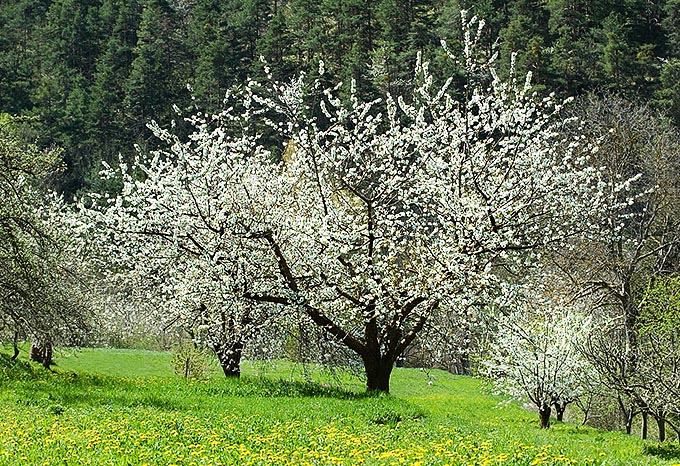 The flowers appear in April/May before the leaves, brightening the landscape © Giuseppe Mazza

It is a heliophilous, or semi-sciafilous, rustic, very resistant to rigid winters tree, which never forms vast populations but grows isolated or in small groups in the warm subzone of the Fagetum, in the oak woods with Turkey oaks and downy oaks, in the formations of beech and silver fir, Scots elm and sessile oak and is governed with tall stem with 25-35 years shifts; often utilized in the reforestations in the parks and in the natural forests because its fruits are very much appreciated by the birds and other fauna. It does not stand the heavy, clayey, humid soils, but tolerates very well the calcareous ones.

The cherry tree multiplies especially through gamic way, that is by seed which is to be previously treated for “waking it” from the dormancy; the germination faculty is good (70-80%). The soft pulp varieties (var. Juliana, the classical heart cherry), those with firm and crispy pulp (var. duracina, commonly called hard-fleshed cherry) and the cultivars obtained from them are usually grafted on the wild cherry. Following grafting are usually done: “bud” in August, and “triangle” or “cleft” in February.

From the cherries they obtain, besides jams, jellies and syrups, also famous liquors such as the Maraschino, cherry aquavit, the Kirsch or Kirschwasser and the Cherry. The peduncles of the cherries are used in phytotherapy especially as diuretics, depuratives-drainings and sedatives of the urinary tracts, particularly suggested for the renal failures, the nephtitises, the cystitides, and the oedematous conditions and for the cases where the increase of the diuresis brings benefit to rheumatic, arthritic forms and gout. They are to be collected in May and are to be dried in the shade in dry and aerated locations. The active principles are the tannic acid, potassium salts and flavonoids (polyphenolic compounds). For external use they are utilized in the cases of reddened skins, telangiectasias (dilated capillaries), associated with the pulp of the horse-chestnut fruits and to the fruits of blueberry (for internal use). 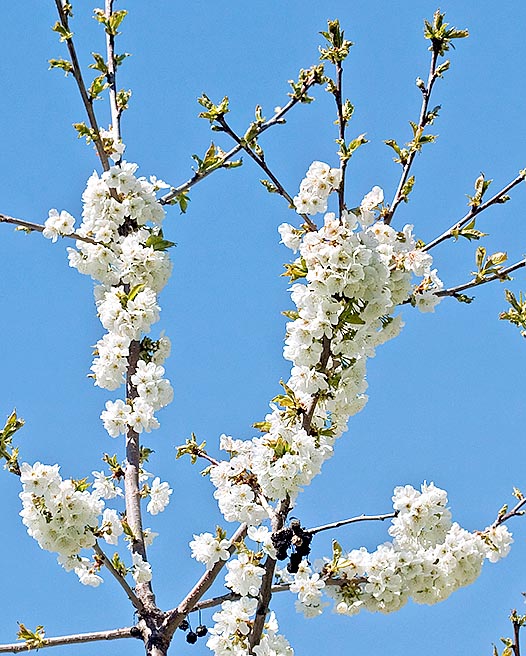 The fruits contain organic acids, provitamin A, vitamins A1, B1, B2, C, tannin, ashes with presence of calcium, phosphorus, copper and manganese.

Many persons avoid eating cherries and other so-called acid fruits, rich of malic, citric acid, etc., fearing that they cause heartburn, in fact it is the opposite, which means that these types of fruit have an alkalinizing action for the body because the weak acids, through the oxidation, produce carbonic acid that, combining with the potassium and the sodium in the blood, forms carbonates and bicarbonate, useful for neutralizing various acids formed as a result of several types of diseases. Conversely, attention is to be paid in not exceeding in the consumption of plants which contain high quantities of oxalic acid (docks, spinaches, sorrel, etc.) because the oxalates forming in them are strongly contraindicated in the cases of nephrolithiasis.

To macerate for three hours a handful of dried peduncles in one litre of cold water, boil the whole and let boiling for 10 minutes; then strain and filter. Three teacups per day.

For a milder diuretic action, prepare the infusion pouring boiling water into a cup with a spoonful of dried peduncles and allow cooling. Two/three cups per day.

Decoction to remove inflammation for external use

To leave for half an hour in one litre of cold water 60-70 grams of dried peduncles, then bring to boil for 15 minutes, then the cold decoction is to be strained and filtered. The decoction is applied on the skin by means of soaked cotton wool on the irritated skin, affected by couperosis or dilated capillaries.

Prunus avium was last modified: May 3rd, 2018 by Giuseppe Mazza