The Psammodromus algirus Linnaeus, 1758, is a cautious lizard that when gets out in the open, for hunting or escaping reasons, always shoots fast, especially when it has in front a sandy expanse without hideouts.Particular that led Linnaeus to create the genus Psammodromus, refers to the Greek “ψάμμος” (psammos) = sand and “δρόμος” (dromos) = run.

The name of the species, algirus, refers to Algeria, where this reptilian is frequent, from the Latin “algirus, a, um” = Algerian.

Brief, it is an Algerian lizard that runs fast on the sand.

The Psammodromus algirus is actually diffused mainly in north-western Africa and in the Iberian Peninsula, but also along the western coast of the Mediterranean France and, surprisingly, in the Isola dei Conigli in Italy, close to Lampedusa.

More than an island, how explains to us the Professor Edoardo Zavattari, it is a big rock about 300 m long and 200 m broad with a height of 27 m, leaning against the southern coast of Lampedusa, from which is separated by 50 m of shallow but not possible to wade sea.The geology and the vegetation are the same as of Lampedusa that, however, has absolutely no lizards. 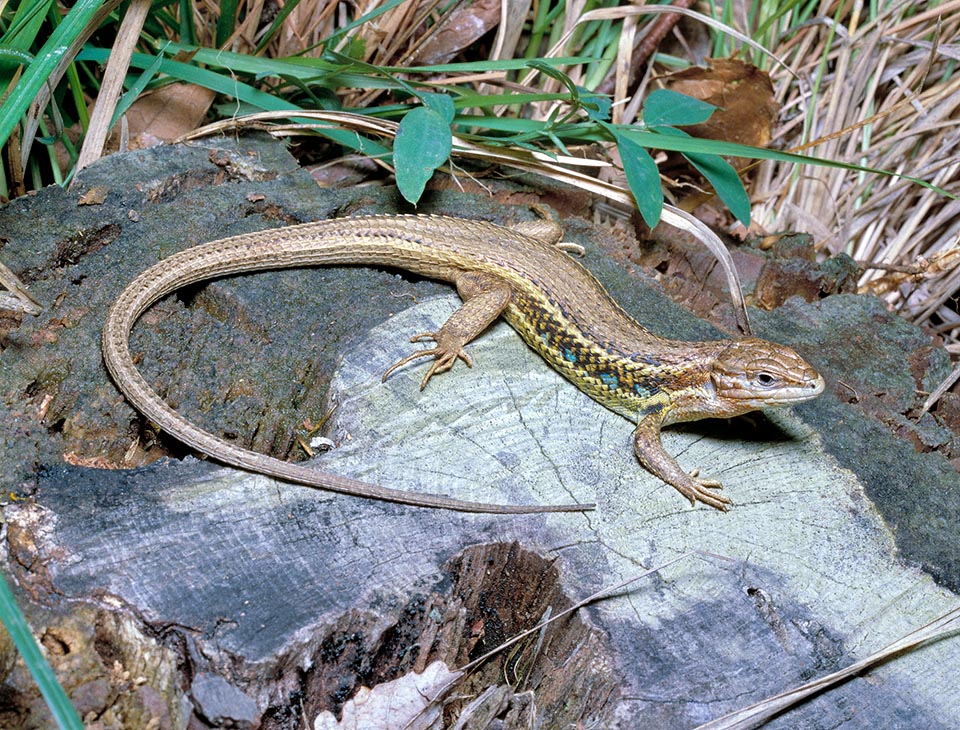 Male of Psammodromus algirus. The light blue dots on the sides, more intense during the reproductive time, are a mark of good health and do not get unobserved to females © Giuseppe Mazza

The only logical explanation of this strange presence might stand in the Miocene Superior, when Lampedusa was united to Tunisia, the Psammodromus algirus has colonized this strip of land and that the detachment of Isola dei Conigli has completed, for unknown reasons,to Lampedusa.

It lives in the coastal pinewoods of the Mediterranean thicket but also, as we know, in more arid, shrubby and sandy zones.

It is a 18-30 cm lizard, two thirds of which concerning the tail. The snout is pointed. The brown back, with imbricate and keeled scales, is delimited by two yellow longitudinal stripes. The sides, darker than the body, have in the adult males some light blue ocelli particularly showy during the reproductive period, when the throat and the cheeks get coloured of orange.

In the morning this lizard leaves the den, usually dug at the base of a tree, to thermoregulate in the sun and then keeps hidden by the vegetation to get out, very fast, only for hunting the insects of which nourishes. 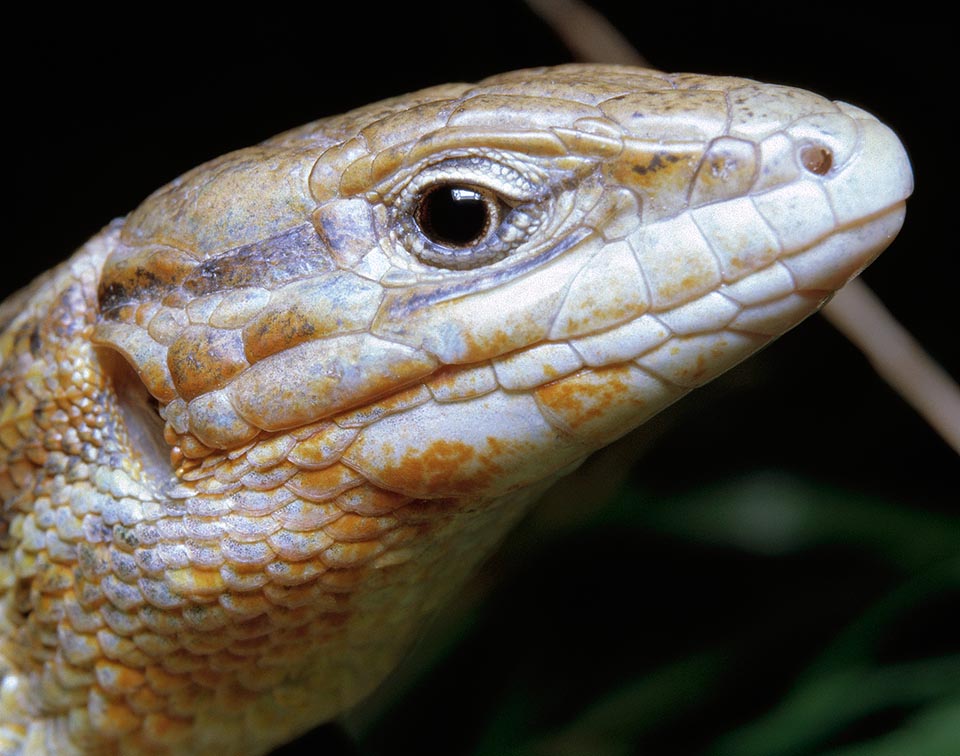 The eyesight is excellent and the hearing very fine. It’s a very fast lizard in predating and escaping but if needed it can fiercely bite emitting squeaky sounds © G. Mazza

Thanks to its excellent eyesight and the very fine hearing it localizes grasshoppers, coleopterans, dipters, ants and spiders on which jumps suddenly, but can also hunt in ambush, camouflaged with the environment, waiting for the prey to pass close. It has been noted that in spring, when the food is scarce, the hungry adult males may at times devour even the small of their own species.

The matings occur between April and June and last 3-15 minutes during which the male immobilizes the female with the usual grip to the throat. After 30-40 days, the females, that are fecundated averagely by two males seasonally, lay in the sand 2-11 eggs 10-14 mm long and about 6-8 mm broad. The newborns, 25-26 mm long tail excluded, are born between August-October and have red sides.