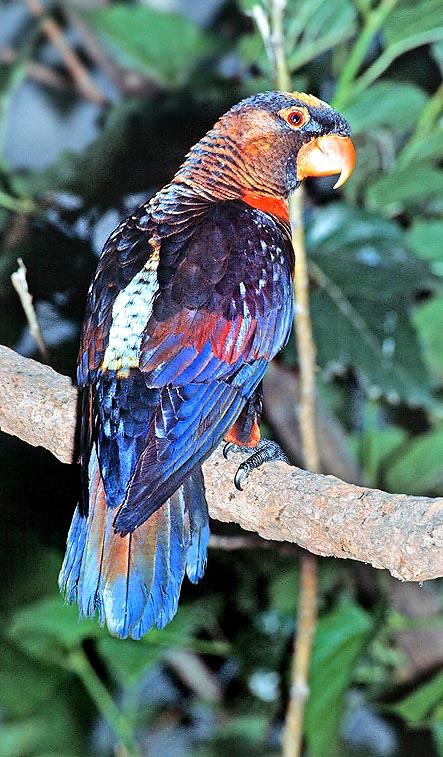 The Dusky or Dusky-orange lory (Pseudeos fuscata Blyth, 1858), discovered in 1858 by the British ornithological biologist Edward Blyth, during his voyages in Papua New Guinea, is the only species afferent to the genus Pseudeos; genus itself introduced taxonomically, at a later stage, by the American zoological biologist, DrSc James Lee Peters, after having observed these specimens in the tropical forests of the eastern coasts of Borneo and the pluvial tropical ones of Papua New Guinea in the inland, where they are found with a greater demographic density.

The Blyth had only describes the species, Pseudeos fuscata, studying their preferred habitats, the alimentary and mating habits, but he had not classified it; it was his American colleague while travelling in Borneo as well as in Papua New Guinea for studying the “lek”: reproductive groups, of the birds members of the Paradiseidae, stumbling again upon this wonderful lory, decided to give it a genus.

It is endemc to Papua New Guinea as well as to the eastern coasts of Borneo. In these islands of the Indo-Pacific and of Indonesia these parrots are fairly numerous, as they manage to coexist with the human beings, tolerating the modifications he causes to the habitat through a dystrophic urbanization introduced since about 20 years, also in these last biologic paradises.

As briefly said before, they are animals which adapt quite well to coexist with the modifications done in the habitat by the man; these last ones as they have not varied the numeric density and not even the demographic curve, has done so that the CITES has not forbidden its trade and, in the mean time, the IUCN has not inserted them in the red list of the endangered species, also thanks to their high rate of fertility. For this reason, it is one of the most common Psittacidae in the zoological gardens, where they are often utilized as “reproducers”, much appreciated also by the private parties who keep them in their aviaries.

For what the preferred habitats are concerned, such Psittacidae, have an ample range of choices; they may live in the tropical forests (coastal and inland), as well as also in the savannahs, where they even may walk on the ground. They love anyway, seen the zygodactylous foot, an arboreal life, colonizing inland and also coastal forests, of coconut palms (especially along the coasts) and areas wooded by plants of the genus Pittosporacea.  They form very heavy condominium nests, where tens and tens of specimens do nidify. In the areas where it utilizes trees as roost, numerous units of these specimens get together, conspecific males and females, and with their loud cries they may be heard even 2-3 km far away; these gatherings are facilitated by their typical docile and ludic character. It is not rare to find them in the mountain forests covering the slopes of the mountain ranges of Papua, up to 2.000 m of altitude and even higher. Usually, the mountain forests are preferred for the reproduction, whilst the coastal areas for the daily life, beyond the meeting season.

The look and the behaviour of the Pseudeos fuscata fuscata are much original. The livery is quite unusual because it is a mix of bright and delicate colours. There are two types of colouration, in the most common the lower parts of the body are bright orange and black, the wings are orange, the head and the nape are orange, brown and black. In the other type, the orange colour is replaced by the yellow. In both livery types, which do not outline different races or subspecies, the upper parts of the body are dark brown with copper and blue reflexes, the inferior coverts of the tail are dark blue and the tail is bronzy, blue and orange (or yellow). The beak itself and the skin, on the sides of the lower branch of the keratin film (or beak), are orange and the iris is bright orange. 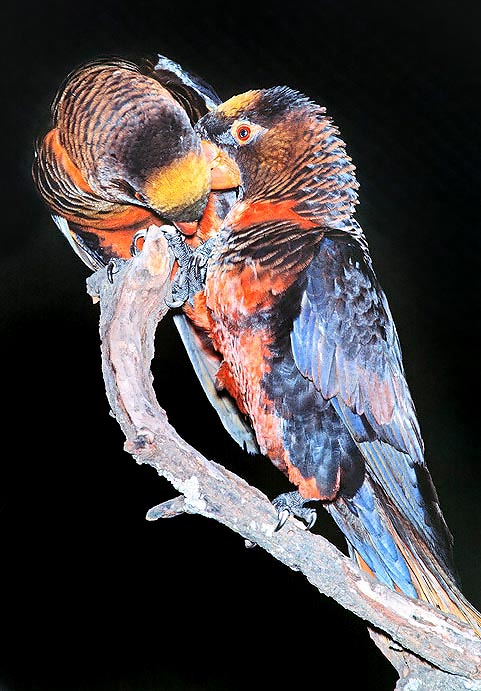 The etymological origin of the common name of this bird (fosco, fuscata) is not well clear, apart that, maybe, they have referred to a sexually immature individual; many young, in fact, have a livery with a much dimmed colouration. Both male and female are usually 24 cm long.

It would appear not to be evident sexual dimorphism characters, but in reality, the ornithological biologists have observed the presence of a rump (structure in cloacal position), assuming a yellow and white colouration in the male, whilst in the female this is more silvery.

Their diet is formed by nectar and pollen, which, while flying towards the flowers, the get from their corollas, by means of their brushy tongue, fruits, panic grass (genus Panicum, annual Asian plant) and cobs of corn, or sweet corn. They are therefore, nectarivorous, frugivorous and granivorous.

When in captivity, the biologists give them also milk and bread, or, at times, even only milk. After that the pullets have reached the three weeks of life, they may be given also sprouted sunflower seeds, which are quite good for structuring and constructing the final plumage, as they strengthen the developing rachis, both of the feathers and of the plumes.

The Dusky Lories (Pseudeos fuscata), are extrovert, and are usually much docile and very active; they play a lot on the branches, in the pools and with their conspecifics. They are also very brave and noisy; only during the periods coincident with the reproduction; the males may become particularly aggressive for defending their partner and the nest. The dusk lories have a seasonal reproduction, instead of continuous as in other genera of lories. Two eggs are laid, and are incubated by the female for twenty-four days, while the male takes care of the alimentary subsistence as well as of the initial construction of the nest. The pullets remain in the nest for 11-12 weeks before going away. In the artificial breeding, the nest box should have a squared base of 23 cm per side and about 61 cm of height. The litter of the artificial nest must be changed at least once a week, till when the young are in the nest.

These nice birds are true and real bath addicts; they are very robust animals and bathe also when the temperatures are low. In reality, the low temperatures, are due, in the Indo-Pacific area to altitude displacements more than to latitudinal reasons. As a matter of fact, in Papua New Guinea, like in Borneo, the latitudinal temperature is always high in biotopes with high percentage of relative humidity; on the contrary, there are low temperatures with the increase of the altitude on the mountains, where, even over the 2.000 m of altitude, these birds can mate, live and play also in the snow!

As already stated, in New Guinea they live in flocks; their flight is very fast, straight or diving. The individuals bred in captivity and born in artificial habitat, as soon as left free, quite easily and spontaneously begin to explore the zone looking for flowers from which to obtain nectar and pollen to eat.

Often, in the aquatic parks and zoological gardens, they stand among the few species of Psittacidae left to live in liberty, as they move flying sliding among the public, without injuring them and in this way they can offer memorable performances. The zoological garden of London and the Loro Parque of Tenerife, Canary Islands – Span, stand among the parks having the most beautiful collections in the world of the Pseudeos fuscata.