The Pseudocheilinus hexataenia (Bleeker, 1857), commonly known as Sixline wrasse, belongs to the class of the Actinopterygii, the ray-finned fishes, to the vast order of the Perciformes, and to the numerous family of the Labridae.

The name of the genus Pseudocheilinus, comes from the Greek “ψευδής” (pseudes) = false and “χεῖλος” (cheilos) = lips, that is, “false lips”, due to the profile of the muzzle; the specific one, hexataenia, comes, aways in Greek, from “ἑξα-” (hexa-) = six and “ταίνια “(tainia) = stripe, due to the presence on its sides of 6 orange lines.

The Pseudocheilinus hexataenia has a very vast distribution in the Indo-Pacific. We find it from the Red Sea to South Africa along all the African coast and in Madagascar. Then, towards east, is present, indicatively, in the islands of Réunion, Mauritius, Seychelles, Maldives, India, Sri Lanka, Thailand, Malaysia, Indonesia, Vietnam, Philippines, Taiwan and China up to south Japan. Frequent also in Oceania, from Papua New Guinea, the Australian Great Barrier Reef up to Tuamotu Archipelago and Southern Islands.

Even if it might be seen in 1 m of water, it usually swims on the slopes of the outer side of the reefs at 4-35 m of depth with temperatures of 24-28 °C. It looks for food moving with caution, ready to take shelter among the corals at the first sign of danger. 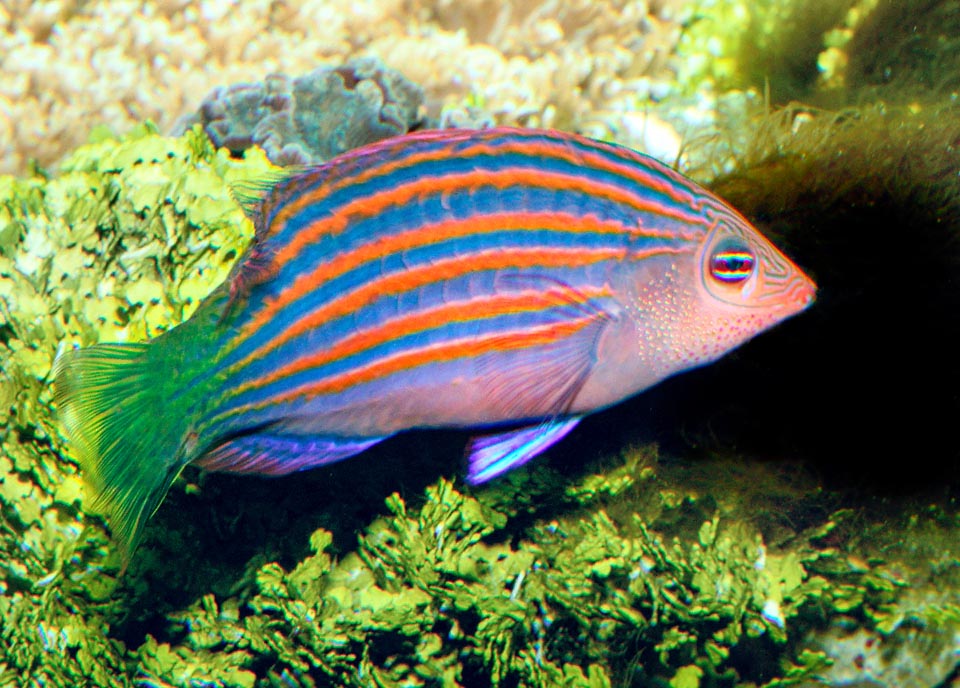 Frequent in the Indo-Pacific, the Pseudocheilinus hexataenia is a palette of colours reaching rarely the 10 cm of length © Giuseppe Mazza

It reaches a maximum length of 10 cm, and this, united with the multicoloured livery and a more than affordable price, renders it one of the frequent hosts for marine and domestic aquaria. The six orange bands are emphasized by the adjacent blue starting from the lower part of the dorsal fin and accompanies them up to the belly where it turns pink, the same colour as the head, adorned by blue arabesques and a fine red dotting on the chin sided, as if it was not enough, by an analogous yellow dotting. Peduncle and most of the caudal fin are green with a very small ocellus, whilst the eye is red with two parallel white bands to confuse the ideas to the predators.

There is no sexual dimorphism but the females are smaller and rarely exceed the 7 cm.

The Sixline wrasse nourishes of zoo-plankton but also of zoobenthos, that is of the animals it finds on the bottom. In its diet enter regularly crustaceans, amphipods, larvae of lobster, small worms and the eggs regularly stolen to the fishes that lay them among the algae or under the corals. 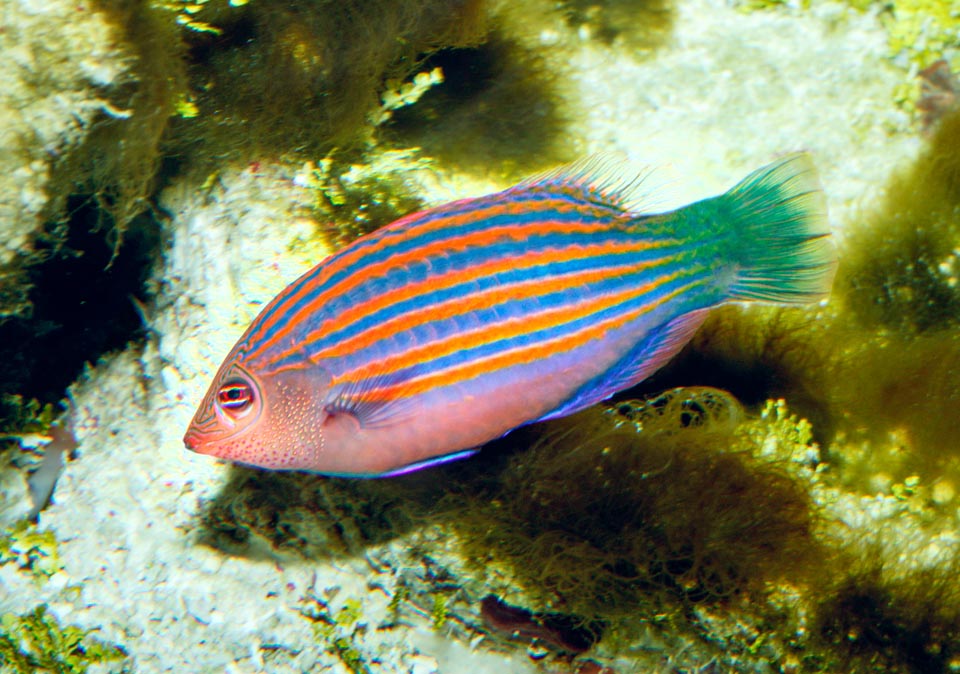 It nourishes of zoo-plankton but also of small crustaceans, amphipods, lobster larvae, worms and the eggs regularly stolen from the fishes that lay on algae or corals. It’s one of the most common marine aquarium fishes. It adapts but has never reproduced and if the cover is left open it often jumps out, hoping to fall in a better world © Giuseppe Mazza

It may lead a solitary life, in couple or in small harems with the male that approaches the female on duty ready to lay. There are no, as at time happens in the reefs, group weddings. The parental cares are absent and after the fecundation the eggs are abandoned to their fate.

The Pseudocheilinus hexataeniaare very territorial animals and this trend manifests at once in aquarium with fierce attacks against the newcomers, even if bigger. For the rest, they are not difficult fishes: they eat prawns of the genera Mysis, Artemia, Cyclops, possibly alive in the first days, then also frozen, to reach, if they accept them, the micro-granules for marine fishes. They have never reproduced in aquarium, clear sign that they are not happy. So much so that if they leave open the cover of the aquarium they often jump outside, hoping to fall in a better world.

If a population is decimated by the events, the resilience is excellent with the doubling of the surviving populations in less than 15 months. So, there is nothing surprising if, despite the sad withdrawals for the life of aquarium, the vulnerability index of the species is nowadays (2020) very low, marking only 18 on a scale of 100.