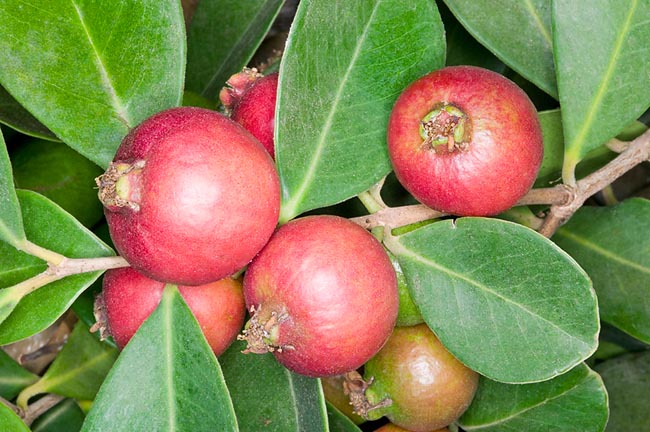 The species is native to Brazil and Uruguay, where it grows in the coastal forests.

The name of the genus comes from the Greek “psidion” = pomegranate, due to the resemblance of the fruits; the species is honoured to the English horticulturist Williiam Cattley (1788-1835).

The Psidium cattleianum Afzel. ex Sabine (1821) is a shrub or a small evergreen, erect, tree, 2-8 m tall, with a smooth, reddish brown, bark, which in the adult plants flakes in thin papery scales, and thick foliage. The leaves, on a 0,5-1 cm long petiole, are opposite, obovate, 3-13 cm long and 2-6 cm broad, rather coriaceous, of glossy dark green on the upper page, pale below; the young buds have a bronze colouration.

The flowers are hermaphrodite, usually solitary, at times in clusters up to 3, at the axil of the leaves, of 2-5 cm of diameter, with 4-5 white obovate petals, 5-7 mm long and a multitude of white, 2 cm long, stamina.

The fruits are globose or obovoid berries, 2,5-4 cm long, of dark red or yellow colour, glossy, with a whitish pulp, about 3 mm thick, which surrounds the juicy central part where are immersed several flat and hard seeds, reniform, 2-3 mm long; the taste is pleasant, rather acidulous and recalls that of the strawberries.

It reproduces by seed, on a sandy substratum, kept humid, at the temperature of 20-22 °C, with the first flowering taking place after 2-4 years, by air layering and tip cutting, grafting and root offshoots; in some humid, tropical zones, has escaped cultivation becoming invasive, thanks to the abundant fructification and to the seeds distributed by birds, wild hogs and other animals, thus producing a thick cover and a thick rooting apparatus which suffocates the already existing vegetation.

It is a species cultivable in the tropical, subtropical and warm temperate climate zones, where it can resist, when adult, to temperatures as low as -6 °C, for a short time, even if with foliage damage; the yellow fruit variety is considered, by many, as slightly more delicate.

For growing up better, it requires a full sun exposition, but it can bear a slight shade and is not particular about the soil, as it can grow in the light and draining and also poor ones as well as in those heavy and swampy, with water stagnation, but it is also capable to resist to dry periods; furthermore, it resists to the wind and, moderately, to the saltiness. Due to its ornamental characteristics, it is often used as isolated specimen or for boundary barriers, also as windbreak; it adapts to pot cultivation, for the decoration of terraces and patios, where it is even able to fructify.

The fruit, rich of fibres, of potassium and of vitamin C, being quickly perishable, is consumed fresh, mainly locally, or is utilized for preparing jams, ice creams and drinks. Several parts of the plant are utilized in the traditional medicine; laboratory studies have shown promising therapeutic properties of the extracts of the leaves and the fruits.