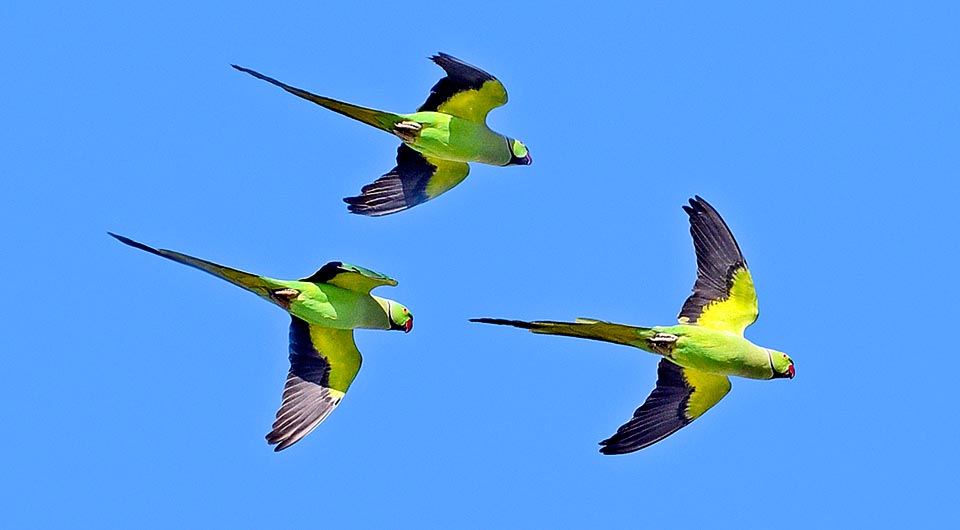 Observing the before nightfall gatherings of the birds, the so-called roostings, is a common thing all over the world. Although inattentive and caught by our daily activities, we do not fail to observe those natural events that move our innate curiosity and wonderment, without however forgetting that besides these considerations, we have to add then the complaints due to the noise caused during the gathering and the nocturnal and stinking presents we find in the morning on the pavement.

Famous are the gatherings of the Starlings (Sturnus vulgaris) in our cities and those of the Hooded crows (Corvus cornix) and the equally but more particular those of the White wagtails (Motacilla alba) in the avenues of Dublin and on the Leicester Post Office in England or the three million of Swallows (Hirundo rustica) in the reedbeds of Durban in South Africa.

Also India in its mysterious and unsettling world, counts its roosting of excellence. An unseemly and booming dormitory, unrepeatable due to the huge number of birds present, but even more because the noise is emitted by a bird that has the characteristic of absolutely being one of the birds with the most strident voice that, added to its well known chatter, amplifies a thousand times a noise that could be easily tolerated. 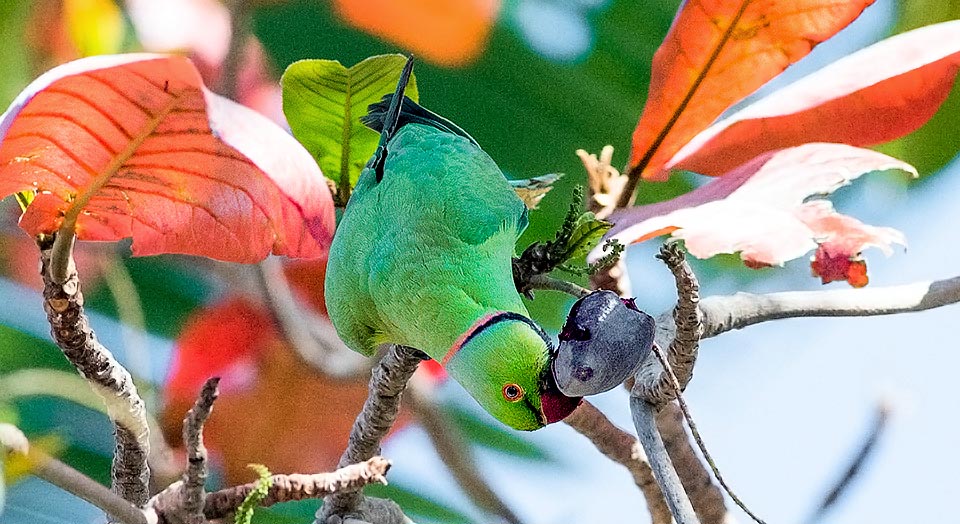 Luckily we are in India, where, without distinction, all animals are particularly loved and protected, nourished and often adored, otherwise the reactions in other sites might be quite different.

In Chandni Chowk area, one of the most important avenues of New Delhi, capital of India, place that in the past has seen the happening of one of the bloodiest reprisals between the English colonialism and the Indian independence, in the evening rallies an enormous quantity of noisy coloured small parrots that come from every part of this immense city for spending the night there. Nobody knows how many they are, some stop in tens of thousands of specimens but others get in incredibly higher numbers.

The Rose-ringed parakeet (Psittacula krameri Scopoli, 1769) belongs to the order of the Psittaciformes and to the family of the Psittacidae, a very vast order that includes in three different families various hundreds of species scattered originally in all continents, but the old Europe. 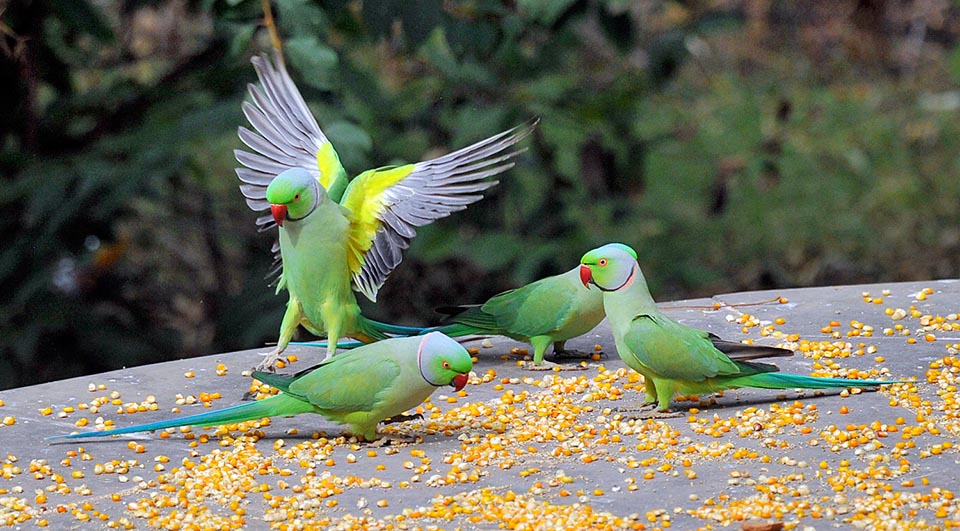 Here in India they offer it maize. Apart religious considerations, man has always admired this parrot, one of the first to be held captive © Gianfranco Colombo

It is one of the most known and common parrots as it was one of the first to be kept in captivity so much that today, due to accidental escapes or due to voluntary release to freedom, we find it nidifying in colonies distributed all over the world.

The etymology of the scientific name comes from the Greek “Psittakos” = parrot, in the diminutive form and “krameri” in memory of the Austrial naturalist Wilhelm Heinrich Kramer to whom Scopoli dedicated the classification of this exotic bird.

In Europe it is called Rose-ringed Parakeet in English, Halsbandsittich in German, Cotorra de Kramer in Spanish, Perruche à collier in French, Parrocchetto dal collare in Italian and Periquito-de-colar in Portuguese. Common names that take in the maximum part the peculiar morphological characteristic. 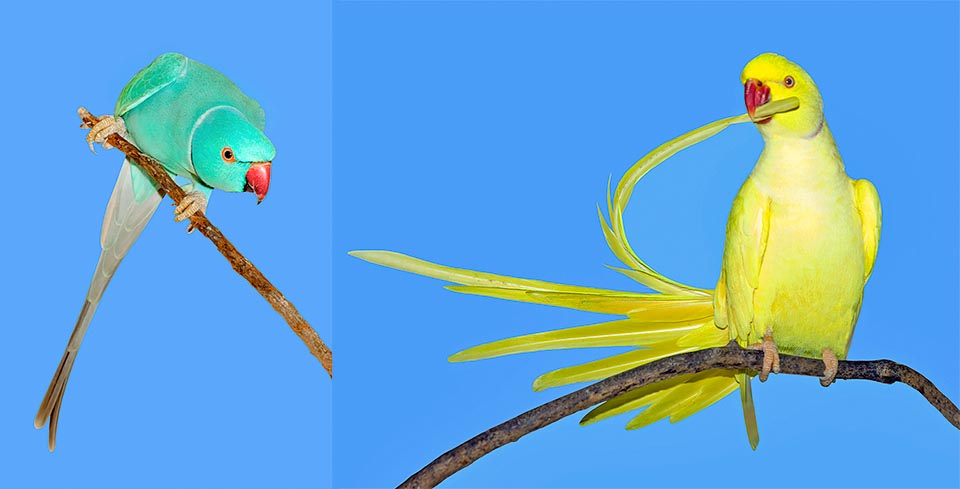 The rose-ringed parakeet is native to Africa and tropical Asia. In the African continent it is found in a narrow and well delimited sub-Saharan stripe that goes from the Atlantic coast of Senegal to the coasts of the Red Sea in Sudan. In Asia, it lives in the Indian subcontinent, from the plains of Pakistan up to Burma, staying always south of the Himalayan chains and covering totally the Indian peninsula. Due to the man however, we find it practically in any part of the world where it has been intentionally or accidentally introduced. Starting from England, first among the European nations to experience this initiative, has now conquered in leopard spots all the European continent with more or less consistent populations but always subject to sudden disappearances for reasons still to be discovered. Italy is well ranked in this classification, with presences in various parks in Rome, Trieste, on the Lake Maggiore, Genova, Milan and in many other cities, locations where the climate conditions but even more the availability of food guarantee its survival. 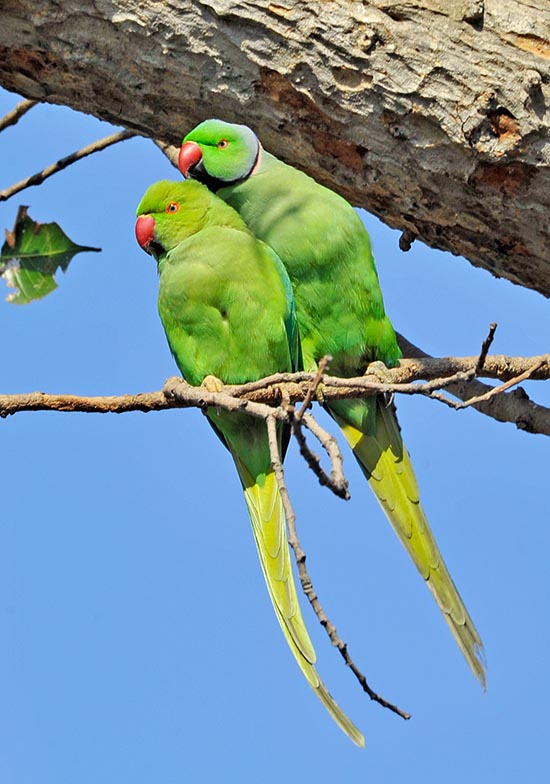 Couple in the wild. Males are at once recognized by the pink and black collar absent in females © Gianfranco Colombo

Being very social and emitting continuously its unpleasant shriek, it is easily noted by whoever lives close to the places it frequents.

The rose-ringed parakeet has two distinct habitats that frequents promiscuously with no limitation. If in Africa, living in the semi desert belt of Sahel, it fights against the well known periods of drought that rankle theese areas, limiting to a life in steppe and arid environments, often surviving in reduced numbers by stealing the meager harvests of sorghum and millet of the locals, in the Indian plains the matter is quite different.

An often outsized prosperity for a bird who gets to avail of immense plains cultivated with rice, maize and many other goodies of which is often cause of considerable damage. Even the number of the presences is highly conditioned by these situations! However, it is able to adapt, as done in Europe and in other locations where it got to live, to situations well different but always acceptable.

In Indian urban centres it has then become so numerous and ubiquitary to replace those that in Europe are the presences of the House sparrows (Passer domesticus), of the Starling (Sturnus vulgaris) or of the Rock pigeon (Columba livia). They have taken practically possession of the anthropized space occupying roads, parks, rural courtyards and even more all the countless Hindu temples.

Its habitat is characterized by the presence of treed areas where to gather and possibly nidify but also of vast clearings free from vegetation and especially cultivated, as this bird is very terricolous and loves spending part of its time on the ground. In Africa it is much less anthropized than in Asia as being widely hunted and pursued. A mutual struggle for survival felt much more here than anywhere else.

As customary in the arboreal parrots, the green is the dominant colour of their livery. This parakeet is practically entirely of this colour excepting the pink and black collar well marked in the male and missing in the female. A very pale and bright green, tending to light blue often due to the slight reflection of the light on its coverts feathers. The underwing is of a more yellowish and paler colour. The bill is bright orange, very arched like in all the psittacids and the brownish legs with zygodactylous fingers. The eyes are black but with a periophtalmic ring of a nice orange yellow well visible also from far away. Peculiar characteristic of this bird is the very long pointed and scalar tail that may reach even the 22/25 cm of the 40/45 of the total length. The weight is of 150/170 g and the wingspan of about 50 cm. The flight is very fast and straight, having very narrow and tapered wings, invariably accompanied by a croaking and sharp “kaak kaak” of warning. 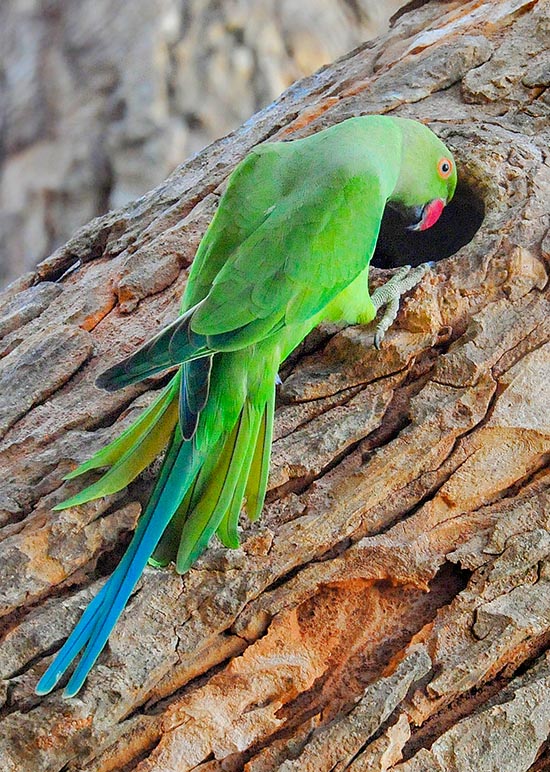 The practically inexistent nest can be the cavity of a tree but also a crack of a building. The female broods for about a month 2-6 eggs. The chicks grow slowly and fly when 7 weeks old lovingly followed by both parents. Life expectancy easily exceeds the 20 years © Gianfranco Colombo

Being this parakeet one of the most common species of psittaciforms present in the nurseries of all the world, with the help of the more and more updated hybridization techniques, they have obtained for this species an unbelievable number of mutations with colours and peculiarities which appear sometimes incredible. In this way they have obtained specimens entirely light blue, others yellow or white, then grey or cobalt and other more variegated with colours that never could be imagined.

In nature this bird may be mistaken with very similar congeneric species that often share the same ranges and that only attentive ornithologistsare able to determine with precision when in the wild.

The parakeet is a granivorous and frugivorous bird with seasonal preferences for one diet or the other, dictated surely by the different times of ripening of these foods.

During the harvesting season it prefers to go around in the cultivated countries to plunder, in rather numerous flocks, the cultivations of cereals and of legumes, from rice to maize, from the lentils to the wheat, from the peanuts to the sunflower, from chickepas to peas and many other oily seeds but the favourite food remain absolutely the fruits of whatever kind.

The tamarind, so much common in the Indian plains in those endless avenues that connect for kilometres and kilometres cities and rural zones, is often very frequently targetted seen the abundance and in the same time the sweetness of its fruit. It loves very much also the mangoes, the jujubes, the dates, the papayas and also the flowers of Erythrina and of Acacia.

It is a species with a high rate of success in reproduction, mainly due to the fact that this bird places the nest in holes of old trees, in abandoned woodpeckers nests and, in the Indian area, in the attics of the houses, in the old monuments and in any crack available in the dwellings walls. Moreover, the niche is always located at a good height from the ground. The nest is practically non-existent and the eggs are laid on the natural substratum found inside the chosen shelter. 2 to 5 very white eggs, of very rounded shape, are laid and the female will brood them for about 4 weeks. The chicks, fairly slow in growing, fly off after about 7 weeks lovingly followed by both parents.

Like all parrots, also this parakeet has a rather long life expectancy that easily exceeds the 20 years. For this reason and for the consistence of its populations, the species is not considered in danger, on the contrary, lately, a considerable increase in the overall number has been noted.