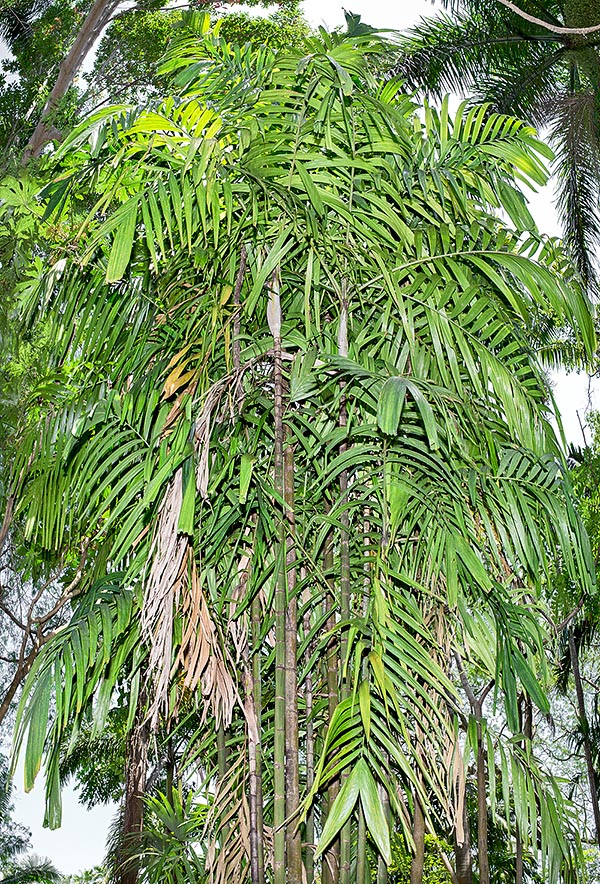 With stems of 5-9 cm of diameter, at first sight similar to bamboos due to the embossed traces of the fallen leaves, the Ptychosperma lauterbachii of New Guinea grows along the rivers and in periodically flooded areas. Elegant unarmed species, mostly cespitous, that may be 12 m tall © Giuseppe Mazza

The species is native to New Guinea where it grows in the coastal forests and along the water streams, often in lands periodically flooded, at low altitudes.

The name of the genus is the combination of the Greek substantives “πτυχή” (ptyché) = crease and “σπέρμα” (sperma) = semen, with reference to the grooves present on the seed; the species is honoured to the German explorer and botanist Carl Adolf Georg Lauterbach (1864-1937).

The Ptychosperma lauterbachii Becc. (1914) is an unarmed species usually cespitous with stems, up to 12 m tall and of 5-9 cm of diameter, of greyish colour in the oldest parts, with darker and prominent rings trace of the junction of the fallen leaves. The leaves, on a 15-30 cm long petiole, are pinnate, about 2,4 m long, with leaflets regularly arranged along the rachis at slightly different angles, linear or cuneiform, cut obliquely and toothed at the apex, 40-50 cm long and 3-9 cm broad in the central part, of opaque intense green colour. The foliar base, of pale green colour and covered by a thick white down, wraps entirely the stem for a length of 40-60 cm.

Inflorescences under the leaves (infrafoliar) with unisexual flowers arranged in triads (one female flower between two male).

Ovoidal fruits, 1,5 cm long and of 0,9 cm of diameter, initially of green colour, then orange when ripe, containing one single seed run by 5 deep grooves.

It reproduces by seed, previously kept in water for two days, in draining loam maintained constantly humid at the temperature of 24-28 °C. Vigourous and elegant species that should deserve a better diffusion, cultivable exclusively in the tropical and humid subtropical climate regions, as it does not stand temperatures near the 0 °C, if not exceptional and for a very short period. It requires a partially shady position and loams rich of organic substance maintained constantly humid; in zones with dry periods is to be regularly and abundantly irrigated.