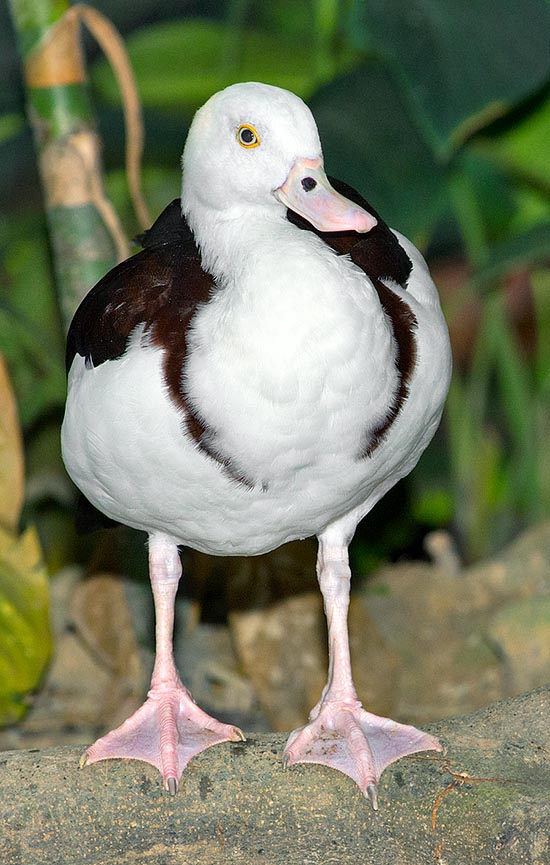 The Radjah radjah owes the species name to its royal look. It is the smallest in this genus with 800-950 g of weight. Arboricolous, decidedly noisy and poorly social in the reproductive period © Giuseppe Mazza

The Radjah shelduck o Raja shelduck (Radjah radjah Lesson 1828), previously known as Tadorna radjah, is the smallest of the six extant species of shelducks, a group of ducks having a quiet characteristic shape and medium-size that includes the common and ruddy shelducks.

It belongs to the order Anseriformes, to the familiy Anatidae and to the tribe Tadornini.

The name of the genus Tadorna, where this species was previously included, comes from Latin and means “aquatic dappled bird” and clearly refers to the well divided and neat colours present in the livery of some of the species belonging to this genus.

The name of the species radjah is the Hindi term for indicating the ruler or the king; this duck has been called in this way to indicate its regal look.

The nominal subspecies lives on the islands, along the coasts, of the Moluccas and in New Guinea. The Australian subspecies (Radjah radjah rufitergum) lives, isolated, on the northern tropical coasts of Northern Australia where their range has remarkably reduced during the last century.

These ducks live in the humid territories and in the estuaries of the monsoonal regions. They have basically coastal habits during the dry season when they frequent muddy areas, mangrove swamps, rivers and brackish lagoons often close to beaches and salt marshes. They love zones with very shallow water (very few centimetres) with presence of natural “pools” and mud banks or the margins of humid zones with deeper waters

It is the smallest extant shelduck with a length of 48-60 cm and weight of 800-950 g. It has very elegant livery and gait and is the most specialized and the most tropical in its own group. The head, the neck, the sides and the abdomen are of extensively white colour. The back and the tail are dark, blackish brown-dark chestnut brown. The wings have iridescent dark green speculum that stands out on the white portion of the wing where is placed; over the speculum there is a small line parallel to the same of black colour; the third distal of the wing, primary quills, their coverts and the alula, are black. The underwing is medium-centrally white and black distally. The chest is crossed by a typical “low ruff” as dark as the dorsal parts. The sexes are similar with the males slightly bigger and with wider band crossing the chest. The eyes are decidedly particular, due to the white iris. The bill and the feet are pale fleshy pink with slight clear grey nuances.

Even if less noisy than the other species of shelducks, these ones however become fairly noisy during the reproductive season. The radjah shelducks are skilled fliers that love crossing in flight, rather than overflying, the woody zones. They vocalize in a continuative way, especially when flying, so much that they are often heard before being seen. The cries, different between males and females, allow distinguishing the sexes: the female hard and strong cries contrast with the hissing whistles emitted by the males. This species is fairly arboreal and during the day stops on the green banks or on leafy trees (like mangroves or Melaleuca spp.) from which easily and skilfully goes up or gets down walking on the branches. Also the muddy banks are utilized for idling; rarely they get away far from the water; they are able to run in a surprisingly rapid manner.

The alimentary habits are mostly nocturnal; the ducks usually leave the resting perches in the late afternoon for going to feed a few kilometres far away. Shortly before leaving for the feeding locations, the radjah shelducks become very active gathering in small quarrelling flocks in the upper parts of the vegetation. Its diet is primarily carnivorous, nourishing mainly of small molluscs, even if the diet includes also insects, some plants and weeds. The feeding technique consists in rapid walks in the shallow water sieving the mud with the bill that is moved from side to side. The ducks can graze also on the land. 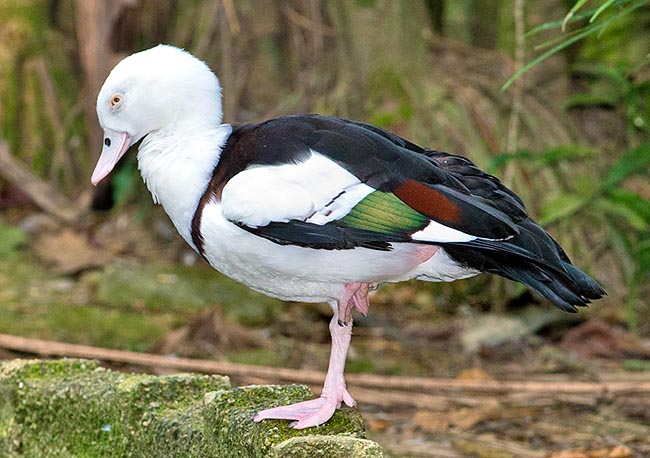 At home in the Moluccas, New Guinea and Australia, frequents mangrove growths and estuaries. Loves the shallow waters and has a mostly carnivorous diet. Still frequent, is protected by laws but endangered by human activities © Giuseppe Mazza

During the reproductive season the radjah shelduck meets in pairs or in small groups of 6-8 individuals. During the dry season much more numerous groups may be observed; from some tens to some hundreds of specimens, gathered in the suitable humid zones. These flocks disperse by the beginning of the rain season (or just before) in correspondence with the reproductive period.

The reproductive pair vigorously defends its territory; the intruders are chased after with bearing that foresee erect plumage, necks elongated forward and menacing vocalizations. The defended nesting territory (at level of aquatic front) may be also of 3 km or little more, including the nesting site, the feeding area and usually faces rivers or humid locations that include areas suitable for the breeding of the ducklings. The nests are located close to the water often in the cavities of the trunks, at the base of big branches or where these ones, broken offer a sufficient supporting surface. The best cavities are occupied again by the same pair in the following years. The hatching is generally formed by 6-12 cream white eggs that are incubated by the female for about 28-30 days. The ducklings are brown with more reddish vertex of the head and with yellow-whitish spots at the level of wings and sides-back; yellow-white are also the cheeks and ventral-chest neck. Both parents care the progeny who is kept in places with water till the coming of the flying off age. The hatchings may “merge” forming some more numerous super-hatchings; the young are able to fly when about two months old but the family units usually remain united for all the next dry season. This species is easy to be hunted due to its own confident nature united to a rather slow way of flying.

Even though this duck is protected (with penalties that, in some zones, foresee also heavy fines) and despite its flesh is not particularly good, many specimens are however killed just for the fact of being easy targets. In spite both subspecies are fairly abundant, in particular the Australian subspecies is considered as rather rare or absent from habitats considered as suitable rightly due to the poaching with firearms. Also the tragic loss of habitat in the tropical humid-coastal zones, the increase of the human settlements, the construction of roads and the increment of the agricultural and generally human activity are elements of great worry for the survival of this as well as of other species. The expansion of the rice cultivation in the northern monsoonal territories, environments stronghold for the species, will form a very serious threat in the next coming future. Conversely, the creation of irrigation waterways and of artificial ponds has benefited the species. The radjah shelduck is appreciated and diffused among the breeders of the entire world even if the subspecies rufitergum is not usually present in the collections out from Australia.