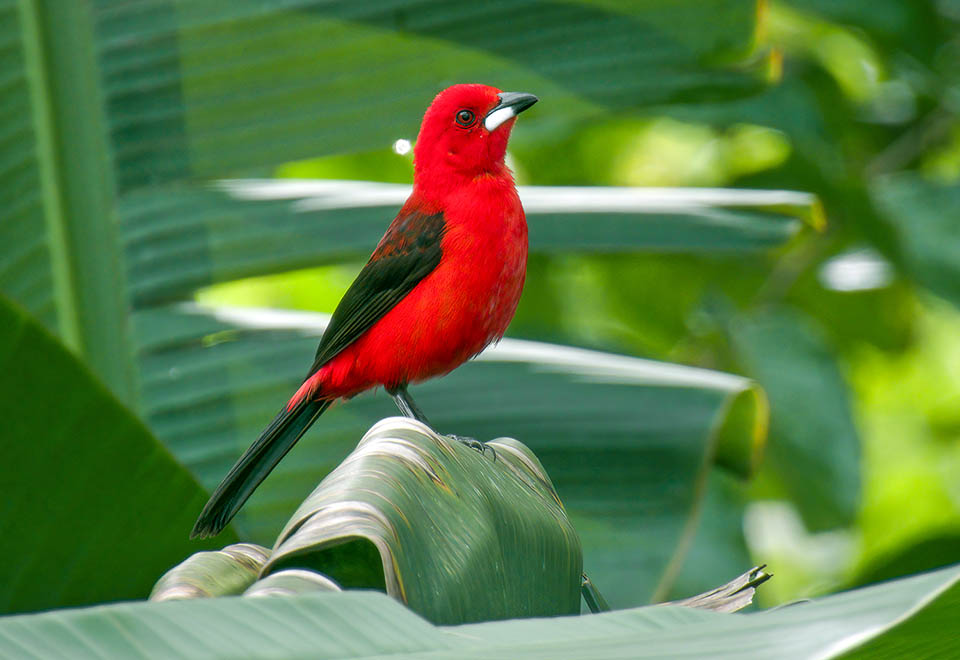 Ramphocelus bresilius (Linnaeus, 1766), commonly known as Brazilian tanager, belongs to one of the most numerous and variegated families of Passeriformes existing in the world, the same to which belong the most famous Darwin’s finches: the family of the Thraupids (Thraupidae), endemic to the New World.

Many members of this family, like Ramphocelus bresilius, are united under the name of “Tangara”, “Tanagra”, or “Tanager” (English), epithets derived from the classical Tupi “tanagorá” (dancer), because of the lively courtships of the males of many species.

It is necessary to pay attention to the differences standing between the vulgar language and the scientific one, as inside the Thraupidae, does exist the eponymous genus Tangara counting presently about 20 multi-coloured birds of more contained dimensions: our passeriform, along with 8 other species, is conversely sited inside the genus Ramphocelus, born from the union of the words “rhámphos” (ῥάμφος, “bill”, “hooked bill”) and “koílos” (κοίλος “concave”), both of old Greek origin. 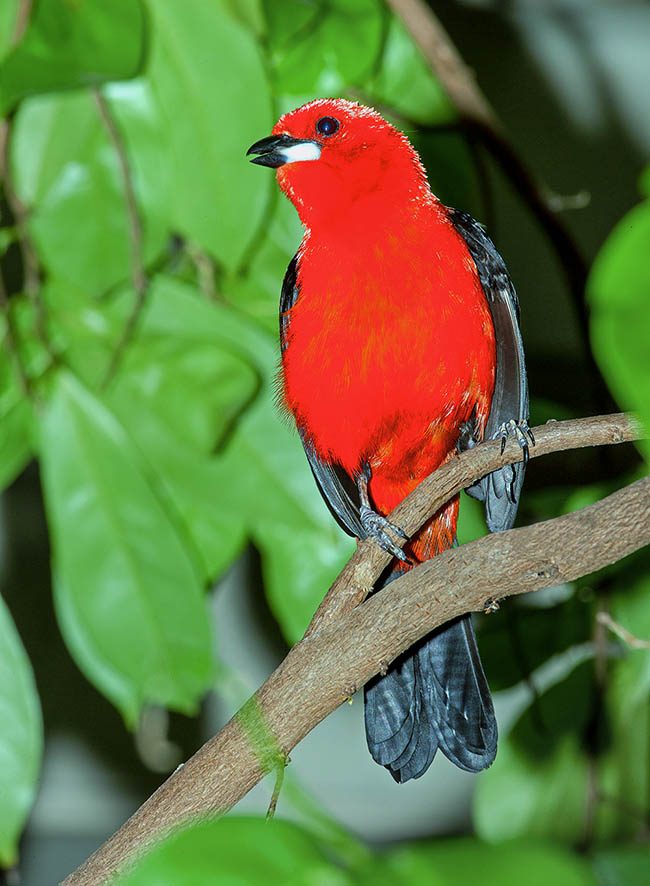 The term bresilius in Latin indicates the Brazilian provenance, hence is clear the scholars’ intention of having wanted to give this species a particularly characteristic name: “Concave bill Brazilian bird”.

The common names mostly refer to its main geographical range, with Tangara or Brazilian Tanagra, but are not absent references to the gaudy liveries of the male, such as Purplish Tangara, Red-necked Tangara and Crimson Tangara, not to be mistaken with other members of the genus, such as Ramphocelus nigrogularis, the Masked crimson Tangara.

The species is almost totally distributed along eastern Brazil, in an area of more than 3000 km, included between the states of Paraiba and Santa Catarina.

Sightings are reported also in the south of the state of Rio Grande do Norte mostly along Baía Formosa and Goianinha, and populations are present also in north-eastern Argentina, in the province of Misiones. Some zones of its distribution area are subject to decreases in numbers due to the seizures for the trade of aviary birds, but “sensu lato”, the Brazilian tanager luckily enjoys a stable trend and is not subject to particularly worrying specific risks.

Although it does not remain indifferent to the South American deforestation still in progress, it has numerous points in favour, first among all, the huge distribution that however interests several protected areas, a high number of individuals and the capacity to survive in anthropized environments.

Ramphocelus bresilius populates and frequents many environments, like the Atlantic forests, of which it is considered as one of the main symbol birds, shrubby areas, humid zones, city parks and gardens. When possible, it loves to stay close to water streams.

Inside its own distribution area, it can reach considerable altitudes above the sea level, from 800 m up to 1.000 m, depending on the specific populations.

Its feeding is mainly based on insects and fruits, including bananas, embaúba (fruits of the Trumpet tree, Cecropia peltata), fruits of the Pitanga (Eugenia uniflora) and of the Gallinero (Iochroma arborescens). 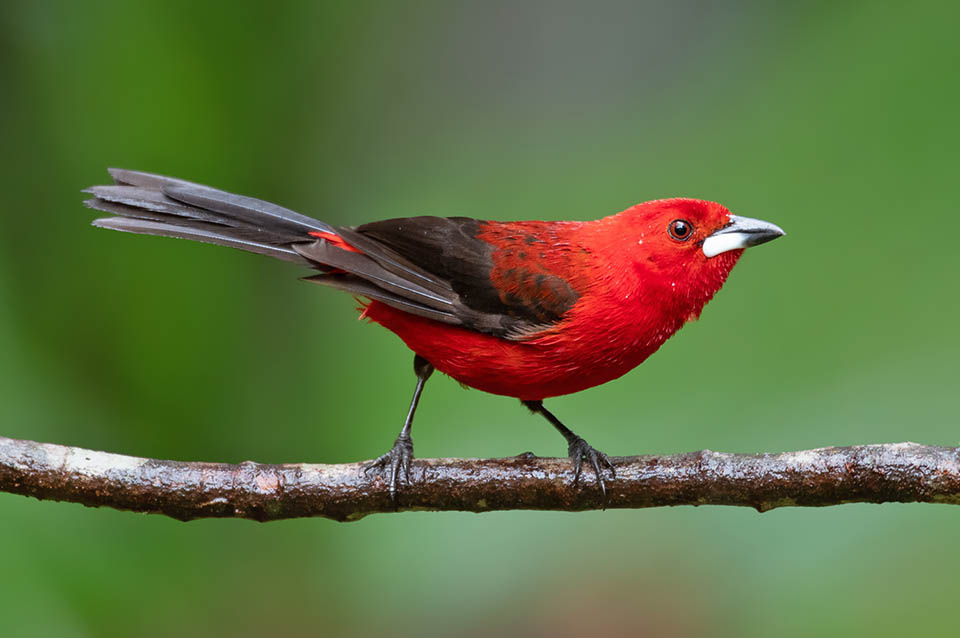 The common name Tangara, that is also a genus inside the Thraupidae, comes from the old Tupi “tanagora’ (dancer) because of the male energetic courting © Carlos Moura

The Brazilian tanager reaches a length of about 18 cm and a weight between 28 and 36 g. In the males we appreciate a lively crimson red plumage with tail and good part of the wings black; also their bills are black, with a particular white spot at the base, characteristic that must be very attractive for the females, as we find it also in the males of other species of the same genus.

The females and the young display a less lively plumage, brown greyish along head, neck, part of the back, wings and tails, brown orange in the remainder of the body. The bill, totally black in the young, in the females presents colours going from brownish to greyish. The sexual maturity is reached when 12 months old, but it’s only during the second year of life that the males begin to show the characteristic crimson red colouring. 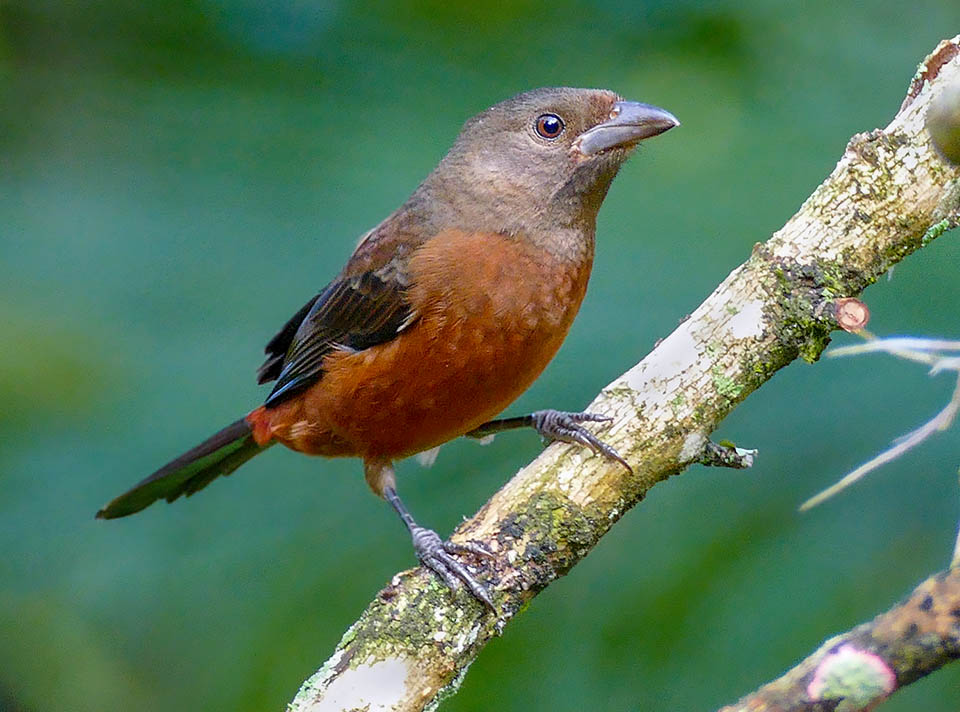 Females and young have a less showy plumage. Brown-greyish along the head, neck, part of the back, wings and tail. Brown-orange in the rest of the body © Egon Fink

The Brazilian tanagers live in pairs or in small groups, usually formed by the two parents and their progeny, and can prove extremely aggressive in protecting their own territory, their food resources, and their nest.

The female weaves the nest by plaiting mosses, fibers, roots, branchlets and leaves, camouflaging it with care into the vegetation and cares for the hatching of the eggs. It lays 2-3 of them, green bluish tapped with blackish, brownish, or greyish dots, whilst the male cares for the protection of the territory and the sustenance of the partner. 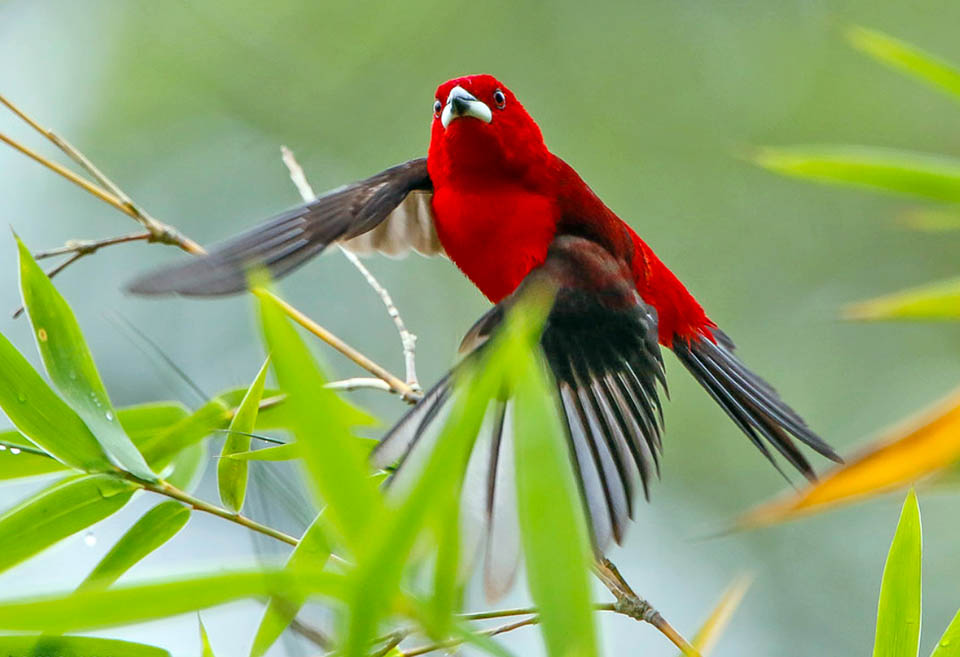 Females and young have a less showy plumage. Brown-greyish along the head, neck, part of the back, wings and tail. Brown-orange in the rest of the body © Egon Fink

Among the possible intruders we may count the Shiny cowbird (Molothrus bonariensis) that in a manner like the most known Common cuckoo (Cuculus canorus) may try to parasitize the nests of these animals. The incubation period lasts about 13 days. Both parents then take care of the feeding of the fledglings that will become independent in about 35 days after their birth.

The song of this species is very melodious and can form an important element of union between different individuals, especially through collective vocalizations: quite characteristic is the trisyllabic chirping “djüle-djüle-djüle”, usually repeated in calm rhythms. Vocalizations of call or of alarm include sounds such as “jep”, “jip”, “ist”, “sst-sst”, or a very resounding “tchiip” while feeding.