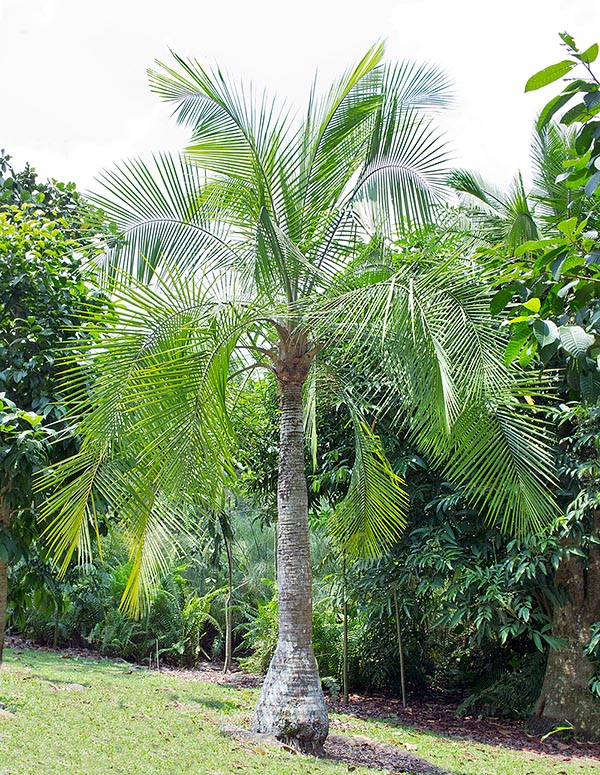 The species is native to south-western Madagascar where is nowadays present with a few specimens in the forests at the margins of the water streams, between 350 and 750 m of altitude.

The genus was honoured to the German entrepreneur and patron Louis Frederic Jacques Ravené (1823-1879), descendant from a family of Huguenots who had taken refuge in Berlin in 1685; the specific name comes from the Latin substantive “rivulus” = creek, with reference to the fact that it exclusively grows along the banks of the water streams.

The Ravenea rivularis Jum. & H.Perrier (1913) is an unarmed dioecious species with solitary stem, erect, smooth, of pale brown grey colour, up to about 25 m tall, with an enlargement over the base, of 35-50 cm of diameter, and gradually thinned upwards with a diameter under the crown of about 20 cm. The leaves, on a 10-20 cm long petiole, slightly arcuate, 2-2,5 m long, with linear pinnules with pointed apex regularly arranged on a plane, rigid or drooping, that in the terminal part rotate around the rachis arranging vertically, long in the median part up to 60 cm and 3 cm broad, of glossy pale green colour; the foliar base, of brown colour, with fibrous margins, embraces only partially the stem. Inflorescences among the leaves (interfoliar), the male ones, on an about 40 cm long green peduncle, are erect with ramifications of second order, 50-80 cm long, with whitish flowers, the female ones, on an about 50 cm long peduncle, are erect or curved, with ramifications of first order, up to 1,5 m long, with flowers of the same colour. Globose fruits, 0,8-0,9 cm long and of 0,7-0,8 cm of diameter, red when ripe, containing only one globose seed of about 0,6 cm of diameter.

It reproduces by seed, previously kept in lukewarm water for two days, in aerated and draining loam maintained humid at the temperature of 24-26 °C, with germination times of 2-3 months; the first leaflet is bifid.

Species that due to its ornamental characteristics, the speed of growth and the discreet adaptability to different conditions of cultivation has become quickly much popular in the tropical and subtropical regions and marginally in the milder temperate-warm ones; is fairly sensitive to the low temperatures, values around the 0 °C cause damage and turn yellow the foliage, the vegetative apex dies around the -2 °C. Requires full sun, but in the juvenile phase when needs a partial shade, and soils rich of organic substance, acidic to slightly alkaline, draining, maintained constantly humid, even if it can stand, when adult, short drought periods, but to the detriment of the speed of growth and with a less luxuriant appearance; useful are the periodical fertilizations with balanced products with microelements.

Young plants are fequently commercialized in pot for the decoration of inner spaces, but due to the difficulty in creating suitable conditions of light and humidity, their appearance becomes soon less attractive and often do not last long time.

The species, due to the gradual reduction of its habitat, is reported in the red list of the IUCN (International Union for the Conservation of Nature) as “endangered” (at high risk of extinction in nature).