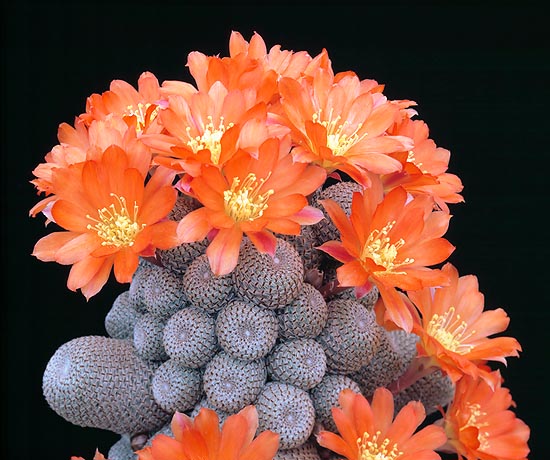 Rebutia heliosa : small size and a lot of flowers in spring-summer © Giuseppe Mazza

The Rebutia heliosa Rausch (1970) is native to Bolivia, where it grows in semi-arid areas at 2.400-2.500 m of altitude, between Tarija and Narvaez, on mainly sedimentary rocks and with a climate characterized by dry winters, with minimum temperatures lower, as an average, than +10 °C, and rather rainy summers.

The genus is honoured to the French agriculturist of Cactaceae Pierre Rebut (1830-1898); the name of the species comes from the Greek “helios” = sun, with reference to the disposition of the thorns.

Slow growing and initially solitary succulent plant, of globose shape, with slightly depressed apex, 3 cm tall and with a diameter of 3,5 cm, which, with the time, tends to tuft, in particular when cultivated, and to become almost cylindrical, especially in the oldest specimens.

It has 1 mm tall tubercles, placed along 35-40 spirals with oval areoles provided with a brown down and 24-26 white radial thorns, 1 mm long, comb-like placed, which almost hide the green grey epidermis; there is no presence or evidence of central thorns. The flowers, diurnal and long lasting (10 days about) much produced in spring-summer, are funnel-shaped, 5 cm long and with a diameter of 4 cm, of orange or orange red colour and come out at the base of the plant. The fruits are globose, of purple red colour and contain 1 mm long seeds. It easily reproduces by division and by seed in sandy soil at a temperature of 22-24° C; the seedlings are to be moved only after they have formed a good radical apparatus, roughly when the plant has reached a diameter of about two centimetres. The young plants start blooming by the second-third year of age.

It is one of the most cultivated and appreciated plants by the collectors due to its reduced dimensions, the particularity of the thorns and the abundant, showy flowering. It is to be placed in full sun or, in any case, at the maximum possible luminosity.

Being particularly sensitive to the radical rottenness due to humidity stagnation, it is to be cultivated on particularly porous and draining soils, which may be formed by common fertilized garden earth, rough sand and crushed stone without dust in equal parts. Its collocation in full soil is limited to the situations where it is possible to recreate the particular habitat conditions of origin, but usually it is cultivated in pot with the same aforementioned modalities.

In summer, during the vegetative period, is to be regularly watered, but allowing the soil to dry up completely before irrigating again, in winter the watering are to be stopped and even if in arid location it can bear for short time temperatures reaching the -10° C, in order to avoid easy rottenness, is to be kept dry at a temperature of about +3/+5 °C, this period of cold rest is indispensable for the flowering. It is suggested to utilize deep clay pots in order to allow the napiform rootstock to freely develop.

Due to the delicacy of the radical apparatus it is often grafted, for instance, on Hylocereus undatus or Stenocereus pruinosus.

The plant is inscribed into the appendix II of the CITES (plants whose trade is ruled at international level).

Rebutia heliosa was last modified: May 9th, 2018 by Giuseppe Mazza