The Rebutia pulvinosa F. Ritter & Buining (1963) is native to Bolivia, where it grows in semi-arid areas along the Rio Pilaya, not far from Narvaez (department of Tarija), on mainly sedimentary rocks and with a climate characterized by dry winters, with minimum average temperatures lower than +10 °C, and rather rainy summers.

The genus is honoured to Pierre Rebut (1830-1898), French grower of cacti ; the name of the species comes from the Latin “pulvinus” = cushion, therefore, shaped as a cushion, with reference to the appearance of the tufted plants.

Small, fast growing, plant which forms compacts tufts, from which comes the name of the species, with pale green globose stems, tall up to 5 cm and 3 cm broad, with several ribs arranged in a spiral and not much prominent tubercles. The areoles are round, covered by whitish dawn, and by 15-22 radial thorns, white and flexible, 3-5 mm long, and 6 central thorns, up to 1 cm long, of a pale brown colour.

The funnel-shaped flowers, with a diameter of 2-3 cm, originate in spring at the base of the plant and are of orange yellow colour; they keep open for about six days. There is also a form with white flowers.

The fruits are purple red, globose and contain 1 mm long seeds, but for the fructification the presence of another plant is needed, not to be obtained by division from the same plant. This last will furnish the pollen, as, in fact, the flowers, even if hermaphrodite, are self sterile. 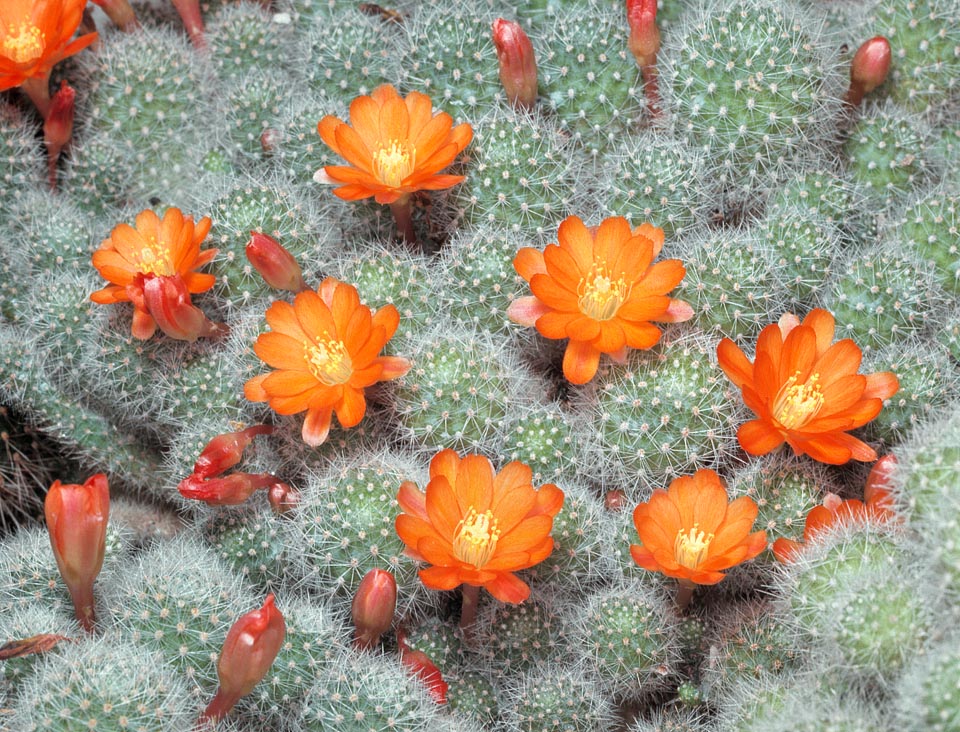 Native to Bolivia, Rebutia pulvinosa is a miniature cactus, fast growing, forming compact tufts. 5 cm stems of 3 cm of diameter and 2-3 cm broad flowers lasting about 6 days. It resists at -5 °C but is very sensitive to root rottenness due to humidity stagnation and is to be grown in particularly porous and draining soils © Giuseppe Mazza

It easily reproduces both by division and by seed in sandy mould at a temperature of 20-22° C; the young plants bloom already by the second/third year of age.

Miniature cactus, very ornamental because of its compact tufts, which are formed rather quickly and its showy blooming; to be cultivated in full sun or, at least, at the maximum possible luminosity.

Being particularly sensitive to the radical rottenness caused by humidity stagnation, it is to be cultivated in well draining and porous moulds. They can be formed by common fertilized garden earth, rough sand and crushed stone, without dust, in equal quantities. Its collocation in full earth is limited to the situations where is possible to recreate the particular original environmental conditions, but usually it is cultivated in pot with the same aforementioned modalities.

In summer, during the vegetative period, it is to be regularly watered, but allowing the mould to dry up completely before irrigating again; in winter the watering are to be suspended and even if in dry location it can stand for short time temperatures as down as -5° C, in order to avoid easy rottenness, it is to be kept dry at a temperature ranging from +2 to +5 °C; this period of cool and dry rest is necessary for the blooming.

The plant is inscribed into the appendix II of the CITES (plants whose trade is ruled at international level).