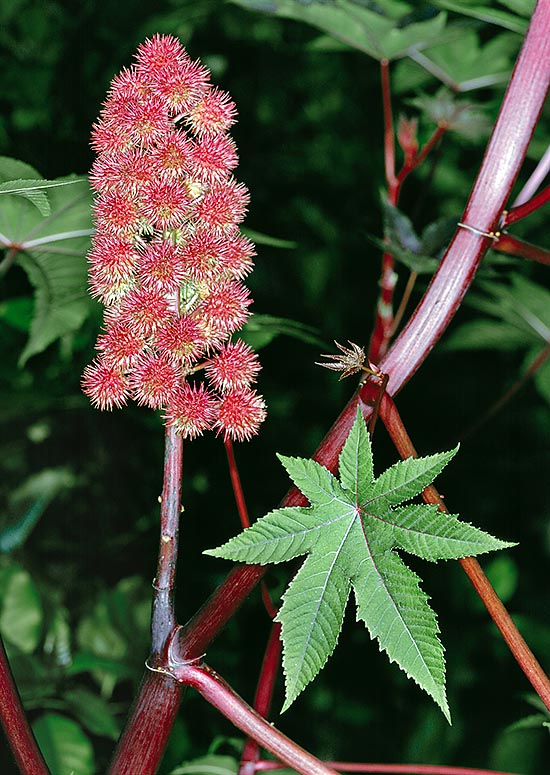 The genus Ricinus includes only one species, the Castor bean plant (Ricinus communis Linnaeus 1753) widely cultivated in the warm countries for the production of oil and in the temperate countries for ornamental purposes.

The name of the genus comes from the Latin “ricinus” that indicates the parasitic arthropod tick, probably due to the shape of the seeds.

The name of the species recalls, for anyone having doubts, that it is not a rare plant.

The English name of the oil, “castor oil” probably comes from the fact that this oil was utilized as substitute of the castoreum, an essence obtained from the perineal glands of the beaver. The English name of castor oil often causes ridiculous errors of translation in Italian, with the ricin oil defined “oil of beaver”.

In the warm countries the castor oil plant is a tree reaching the 10-12 m of height. In Italy, where it is cultivated for ornamental purpose, depending on the climate zones, develops as a small tree or as a perennial shrub or as annual herbaceous, seen that it does bear the winter cold.

The stem is reddish and the rooting apparatus is formed by a taproot developing in depth and by more superficial lateral roots.

15-40 cm leaves, glossy, green or reddish, alternate amplexicaul, with stipule and long petiole, lobed-palmate lamina formed by 5-12 lobes, the central one being bigger, with toothed margin.

The castor plant is a monoecious plant blooming in summer. The flowers, without petals, are carried in racemes arranged at the axil of the leaves or at the apex of the branches. The male flowers, yellow, are at the base of the raceme and are formed by a calyx with 5 sepals and numerous stamina, the female ones are at the apex and have red lanceolate sepals.

The fruit is a capsule formed by three valves covered by not rigid spines, containing three seeds of about 1 cm, oval-flattened, dark, glossy and marbled of red or brown. When ripe, the capsule explodes, throwing the seeds metres away. These are endowed of a caruncle, warty excrescence which seems to facilitate the dispersion done by the ants.

The morphology of the castor oil plant is quite variable due to the presence of several cultivars introduced for ornamental purposes or for the oil production. In the ornamental ones the stem as well as the leaves or the capsules get different colourations between the green and the red-purple with changes during the life of the plant. Recently, they have obtained the complete sequence of its genome. It is thought that these new knowledge might aver useful for studying the systematic affinities of the castor oil plant with the other Euphorbiaceae and especially for planning genetically modified plants in order to reduce the content of ricinolein, highly toxic.

The Italian local names refer to the shape of the seeds or of the fruits.

The castor oil plant is native to the tropical regions of Africa and Asia. The plant has been probably domesticated around the V millennium BC in Asia and imported in Europe since ancient times; nowadays it is amply cultivated all over the world for the production of oil and for ornamental purpose. The man producers are India, China and Brazil. The overall production of seeds is of about one million tons per year. Due its remarkable adaptability, the castor oil plant has diffused in most of the planet, behaving as an invasive species. 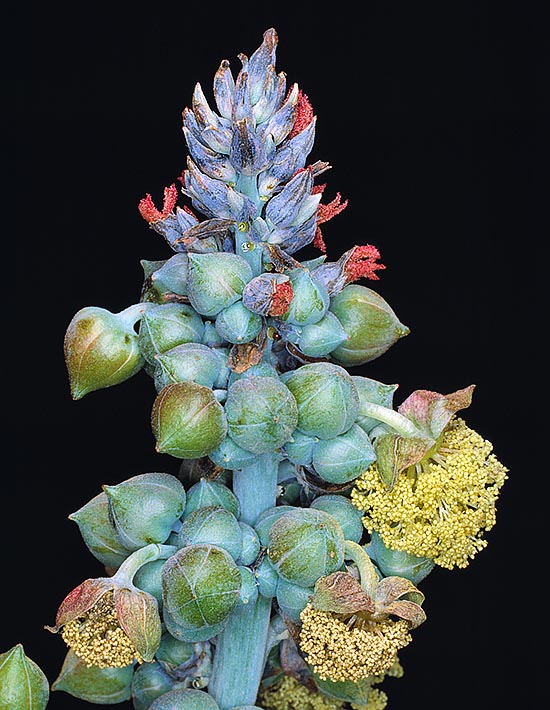 The castor oil plant has few parasites and the main damages to the cultivation are mostly due to meteorological phenomena, such as frost or hail. Among the main parasites, we recall the Ascomycota Alternaria ricini and the bacterium Xanthomonas ricinicola, as well as Botrytis and Fusarium. Amongst the insects, dangerous is the lepidopteran Dichocrocis punctiferalis.

The castor oil plant is the typical host plant of lepidopterans such as Ariadne merione and Achaea janata.

The castor oil plant is used for the production of the oil starting from the seeds (castor oil). The seeds are decorticated, warmed for denaturing the proteins and facilitating the release of the oil, dried hot and finally squeezed. The residual material after the extraction of the oil (oilcakes of castor oil) is utilized as fertilizer with high nitrogen content. The presence in the oilcakes of the ricinine, insoluble in the castor oil, renders them toxic and not suitable as feed.

Chemically, the castor oil is a triglyceride (similarly to the olive oil, it is therefore a compound coming from a molecule of glycerol linked to three molecules of fatty acids). The fatty acid most dominant in the castor oil (95%) is the ricinolec acid, with 18 atoms of carbon and a double link, containing also a hydroxyl group (which differentiates it from the oleic acid, typical of the olive oil) which confers polarity to the molecule. This last characteristic is responsible for many of the particularities of the castor oil as lubricant and of the facility of producing derivates artificially.

The oil obtained is purified with different techniques depending on the expected utilization. The castor oil has many utilizations, industrial, cosmetic and medicinal.

Amongst the industrial utilizations we remind that as fuel for illumination, for the production of biofuels, but especially as lubricant: its characteristics of fluidity and combustion without residuals has fostered its use as lubricant for racing and aircraft engines, in particular for the bronze parts, but especially for the preparation of combustible blend for two-stroke engines for racing or for model-making. Its combustion generates a very characteristic and strong odour. The company Castrol, producer of lubricants, gets rightly its name from the castor oil it utilizes since early ‘900 and presently sells the product Castor M formed by refined castor oil. Other uses are those for the production of polyamide plastic materials (eg. Rilsan) or varnishes.

The most common cosmetic utilizations are those in the fabrication of soaps and ointments and of products for conferring the hairs shine and volume or for facilitating the growth of hairs or eyelashes (even if the effects on the growth are not documented). In the pharmaceutical and alimentary industries the oil and its derivates find application as additives and preservatives in several products.

The castor oil is utilized a laxative and acts after having been in large part digested by the intestinal lipases, freeing the ricinoleic acid. 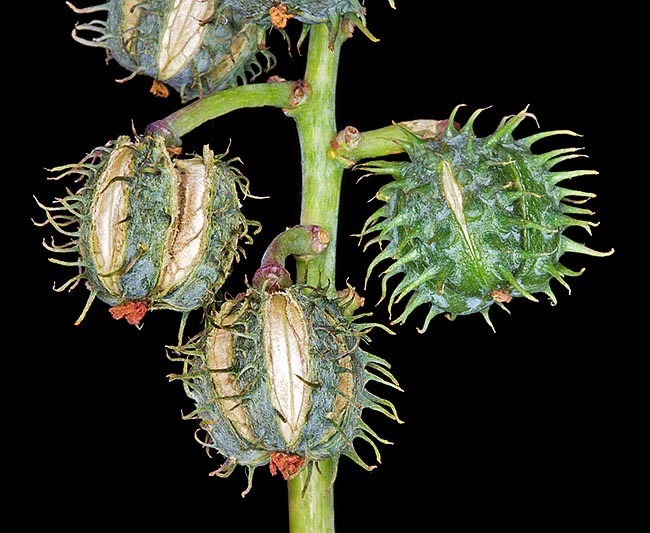 The fruit is a capsule covered by non-rigid spines. It has three valves, each with its seed, separating when ripe. First it cracks, then swells and suddenly ejects the seeds metres away © Giuseppe Mazza

It is one of the oldest used drugs, administered orally besides the laxative action has the property of stimulating the delivery in the pregnant women. Its use as laxative is nowadays much more reduced than in the past. Despite the old and diffused use, the mechanism of action as laxative has been for long time unknown, as it was invoked an action generically irritant on the intestinal mucosa. Recently (2012) t has been proved that the ricinoleic acid acts linking to the receptor EP(3) for the prostaglandins, important signalling molecules similar to hormones, and in such way it stimulates the motility of the intestinal and uterine smooth muscles.

All parts of the plant, but especially the seeds, are toxic due to the presence of a protein, the ricin.

This is one of the most poisonous substances of vegetal origin and the fatal dose by inhalation is of the order of 2 milligrams for an adult. Ingested, the ricin is less toxic, with a lethal dose of the order of 50-100 mg.

The high toxicity has proposed and studied the use as biologic weapon and it is suspected that some crimes in the intelligence world have been done with the ricin. The substance has become famous as potential poison for the bioterrorism in 1972 after the dispatching of two letters containing ricin to the White House and to an office of the Senate of the USA. It is to be underlined that the castor oil does not contain ricin, seen that the toxin is not soluble in the fats and, overall, is deactivated by the heat treatments used during the extraction of the oil from the seeds.

The mechanism of action of the ricin is particularly interesting. It is matter of an inhibitor of the function of the ribosomes, the cellular organelles in charge of the syntesis of the proteins. The toxin is formed by two sub-units, one of which (RTA) is necessary for the entry into the cell and the other (RTB) develops the toxic action. The ricin, linked to the cellular membrane through the RTA, is assumed by the cell by endocytosis (that is, it is enclosed in a membrane vesicle). After a complex transport into the cell, the toxin gets rid of the sub-unit RTA and succeeds in getting out from the vesicle, avoids the cellular mechanisms which might destroy it and finally connects to the ribosomes altering them in an irreversible manner modifying their nucleic acid.

The symptoms of the intoxication appear some hours after the introduction of the toxin and differ depending on the way of administration. In the intoxications by mouth the symptoms are gastrointestinal, with vomit and diarrhoea often haematic and serious dehydration. 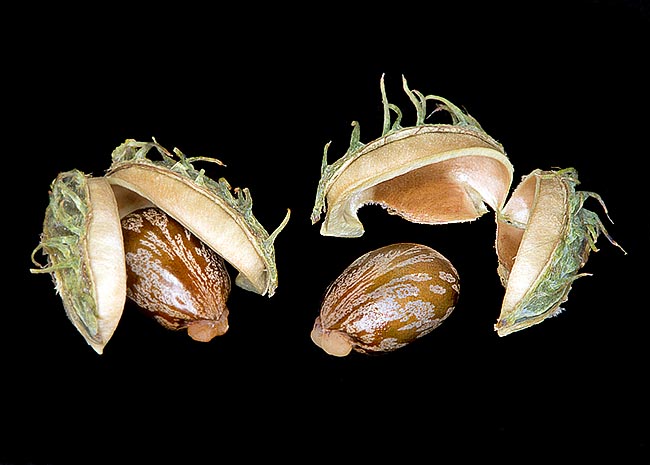 Open valves with 1 cm seeds. They seem ticks and this has given the scientific name of Ricinus. They have a caruncle, warty appendix seeming to facilitate the seeds dispersion by the ants © Giuseppe Mazza

Death occurs by circulatory shock. Most of the intoxications, however not common, happen due to ingestion of seeds: 5-20 of them are fatal for an adult. In order to produce poisoning it is necessary that the seeds are chewed, seen that the untouched seeds go through the intestinal apparatus without releasing the toxin. Despite the high toxicity, the cases of fatal poisoning are rare, even n countries like India, where the castor oil palm grows abundant along the roads. Very rare are the instances of suicide with the seeds, probably due to the much unpleasant, painful and long lasting symptoms. The seeds are toxic for the cattle.

Alcoholic extracts of the plant contain substances with antimicrobial action and others with anti-inflammatory and antihistamine function. Other studies have evidenced acaricide and insecticidal compounds.

Seeds of castor oil plant have been found in Egyptian tombs dated 4000 BC and authors of old Rome refer the use of the oil as cosmetic and for illumination. The castor oil plant was considered in the past as a magical plant associated to the dark magic.

The castor oil has been widely used by the Fascist blackshirts as means of intimidation and as instrument of torture. It was administered, forcibly and in large doses, to the political opponents and to the dissidents, causing strong diarrhoeas. Besides the humiliation coming from the laxative effects, the victims might encounter serious dehydration. It seems that this use has been conceived by Gabriele d’Annunzio at the time of the occupation of Fiume and later own taken up by the Fascists. Franco’s Spain for emulation of fascism applied the same systems on the republicans.