The Roul-roul or Green wood quail or Crested partridge (Rollulus rouloul Scopoli, 1786) is a beautiful bird similar to the partridges or the quails as for shape and size, but peculiar for the colouration and the behavioural biology.

It belongs to the order of the Galliforms (Galliformes), to the family of the Phasianids (Phasianidae), to subfamily of the Perdicines (Perdicinae), to the genus Rollulus to which belongs as unique species: Rollulus rouloul.  The species is frequently indicated with a misspelling: Rollulus roulroul, that is, with the insertion of an additional r. The genus and the species come from “rulul”, the name the inhabitants of Sumatra give to this type of partridge with reference to one of its vocalizations.

The roul-roul is distributed in south-eastern Asia; from southern Burma to south-western Thailand, through the Malaysian Peninsula, on Sumatra Island and some small coastal islands and in Borneo Island.

It lives deep in the forest formed by broad-leaved and evergreen plants and its ideal habitat is that of the undergrowth where it moves in the semidarkness looking for food. It loves the plains and the hills but can go up to 1200 m of altitude. It is a walking and scratching bird that scours the environments where it lives looking for nourishment. When active, it moves only on the soil and tends to get away from possible dangers or predators by walking quickly, hiding in the thick vegetation and flying away rarely and if obliged to do so. Conversely, it usually perches on the branches of trees or bushes for the night rest.

It is a monotypic species, unique not only for being the only species belonging to its own genus but also due to other peculiar characteristics. This partridge, of roundish shape, has a length of about 26 cm and weight varying from about 200 g to little more than 230 g (with the male usually weighing 20-30 g more than the female). Like many birds belonging to the family of the phasianids it presents a marked sexual dimorphism. Both male and female are unmistakable. The male has a spectacular crest of silky-filiform feathers of red-slightly copper-rust colour on the head. All the rest of the plumage is black, cobalt-electric-dark marine blue with green reflections on the upper part of the body. 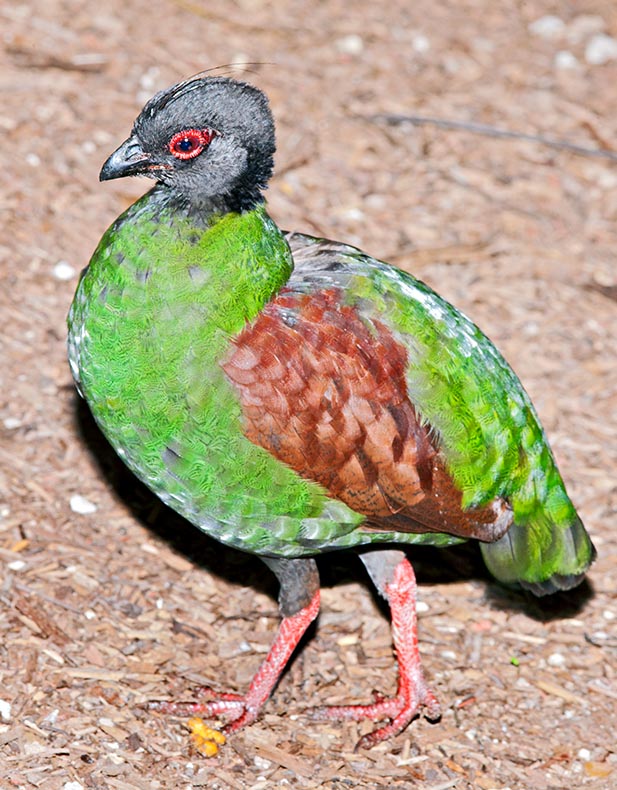 No less beautiful, the female livery is green and hazel brown © Giuseppe Mazza

Overall, the bluish green reflections are present in the dorsal part of the plumage, however basically dark, which becomes totally dark black latero-ventrally. It has rounded wings, about 14 cm long. The feathers of the wing, either flight or coverts are dark brown not very distinguishable from the rest of the plumage also because the shimmering reflections and the dark background colour give homogeneity to the whole livery. The fourth flight feather exceeds the others in length.

On the top of the head, at the base of the tuft of red feathers, are some white feathers drawing a sort of a small crown-white small belt. Before the white small belt, always on the head and always pointing up, are few other feathers having the appearance of long, straight and black hairs. These last feathers form a very small second little tuft not very evident being formed quite few feathers which do not present lateral barbules (on the contrary, these are present not thickly in the feathers forming the red tuft). The eye is big with brown iris; it’s surrounded by an ample ring of red skin with little digitiform papillae arranged like short rays around the eye itself. This ring of red skin prolongs backwards with a triangle of skin which has some small plicas always of bright red colour.

The beak is fairly robust, straight, squat and slightly hooked at the tip; it is black with a showy cinnabar red spot, which recalls the red of the portion of skin of the same colour surrounding the eye, placed in the ventral and basal portion of the beak.

This red spot interests more the lower rhamphotheca of the beak but continues, uninterruptedly (with closed beak) for a trait in the upper rhamphotheca under the nostrils. The legs are typical of a galliform, robust and with rather long tarsus-metatarsus in proportion to the body. They are orange red and have three fingers bent forward and a fourth one, smaller and shorter, bent backwards; do not have spur. The females have quite a livery differing a lot from that of the males, but in any case very nice and equally distinctive. Most of the body has a much typical bright green olive colour. The wings, unlike the male, contrast much from the rest of the plumage being of a nice hazel-brown colour. This colouration interests all the feathers of the wing and prolongs slightly on the feathers of the shoulders. The most distal feathers of the wing (primary flight feathers and some coverts) can be more or less spotted of dark-matt. The head is ash grey; always greyish is the more ventral portion of the livery.

The female does not have the showy red tuft of the male but has the small tuft of filiform dark feathers. The beak is totally black. Also the females have the red periocular ring which, however, is less extensive and with the rear triangle of bare skin brownish-scarcely reddish. The legs are like those of the males. The tail, in these birds, is short and carried rather folded under the body.

The immature resemble the females but with vast brown streaks; the dark colouration of the males appears however precociously rendering easy the distinction of the sexes also in the specimens having few weeks of age. 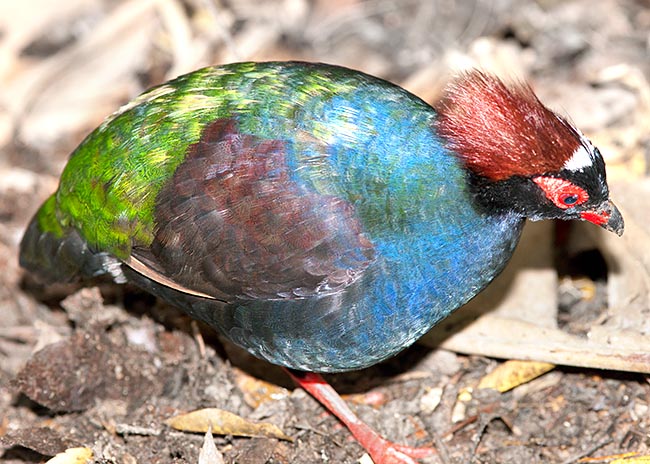 It's a scratcher looking for worms, molluscs and insects but doesn't ignore fruits, leaves and buds © G. Mazza

The roul-roul is an active scratching bird which moves rather big quantities of soil and of vegetal debris looking for food. While holding a paw, which bears the weight of the body, with the other it does ample and sure movements which move the surface of the ground and the fallen leaves in order to see the seeds and the small animals it nourishes of.

These birds eat seeds, buds, leaves, fruits of various type; but also insects such as coleopterans and wood ants and worms and small molluscs.

They have observed an association of roul-rouls with wild pigs.

This observation of different species allows the roul-rouls to get shreds and patches of fruits left by the suids and which the birds would not be able to take advantage of them as they are.

When they are walking, the roul-rouls swing the tail making it sway up an down with a continuous tilting movement similar to that done by the Wagtails (genus Motacilla) but differentiated due to the not the same morphology of the tail, short in this galliform (about 6 cm) and carried, as already said, rather under the body.

The movement of the tail, along with small and hushed vocalizations, has probably the function of keeping in contact among them the pairs or the small family groups which enter the wood looking for food. The roul-roul is a monogamous species and the pair bond is strong and continuously reinforced. The members of the pair, in fact, remain joined even out from the reproductive period: they often go looking for food together, sleep close on the same perch, offer morsels each other and can make mutual grooming manifesting a range of behaviours usually unusual for the galliforms and which are more frequently typical of birds deemed more intelligent such as the parrots (order Psittaciformes) or the corvids (order Passeriformes).

Despite hierarchical relations do apply among the males as well as among the females of this species, it is possible to keep the roul-rouls in captivity (in suitable spaces) in small groups with several females and males without having them struggling. In these cases, often, it is possible to see several males and several females nourishing together without quarrelling, even in presence of pullets or young. 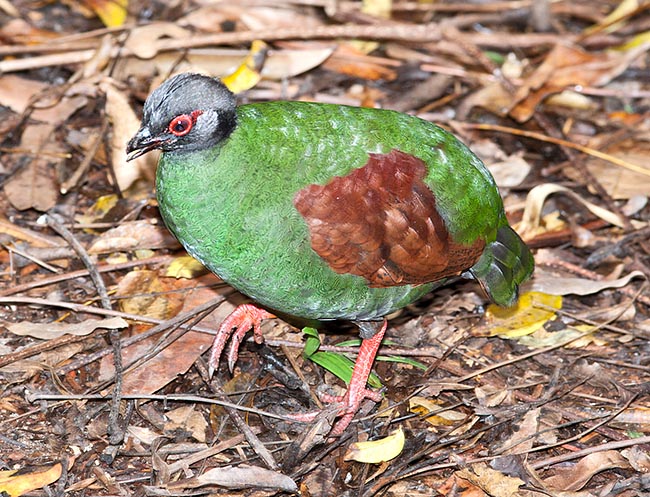 To build the nest they dig under the litter, lifting it, to create a sort of igloo to hide the eggs © Giuseppe Mazza

During the reproduction period both the members of the pair build a nest on the ground which is often realized slipping under a layer of fallen foliage which is moved and worked up to form a sort of vegetal igloo. When a nest of this type is done, the hatching female is not seen being inside the spherical nest which presents a lateral hole of entry/exit. Other times, the nest is done in a simple depression of the soil and is a sort of an open cup in any case surrounded by vegetation that is used by the female for covering the eggs when it leaves the nest. The brood is formed as an average by 4-6 eggs (3-8), rather big and white with smooth shell. Only the female is dedicated to the incubation and, during this period, it rarely gets away, and for short time, from the eggs. The hatching lasts about 18-19 days and the chicks, nidifugous, are very active in following the parents and in finding actively the foods since immediately.

The newborns are covered by a short and thick, rather dark chocolate coloured down (slightly paler in the ventral part); darker and little distinguishable lines run along the longitudinal line of the eyes (encompassing them) and medially on the top of the head. Both parents deal the young with care and dedication; in fact, also the male actively looks for the best food to give to the chicks. It is a show to see a pair of roul-roul accompanied by the progeny; often the parents, when looking for food, separate for some metres dividing also the pullets and then unite again all together. Among the chicks often creates competition and the strongest ones may reach the point to send away and isolate the weakest up to their death.

These birds, if bred, often get used to the human presence coming very close and reaching the point of scratching between the feet of those who offer them prized food. In the past, the roul-roul, outside the origin area, was present only in the best zoological gardens. Nowadays, even if the breeding is not always easy, it is fairly diffused also among the amateurish breeders.