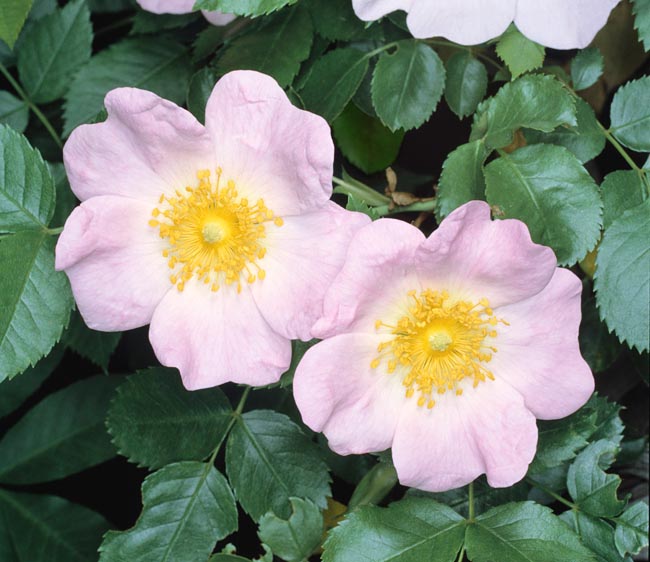 Its (palaeotemperate) distribution area covers most of the temperate zones of Eurasia and North Africa.

The epithet “rosa” has uncertain origins: some Authors derivate it from the Greek “rhódon” = pink, for others it should have originated from the Celtic “rhood” or “rhuud” which means red, due to the colour of many species belonging to this genus.

The name of the species “canina” comes from the Latin “caninus” = canine, dog-like, due to the old belief that the root of this plant should treat the dog rabies and the persons wounded by their bites, therefore from its popular employment dating back to the old Greece: “kynosbator”, from “kyon”, “kynos”, dog and “batos” = thorn, thorny shrub.

Thick deciduous shrub, showy when flowering, on average 1,5-2,5 m tall, with erect or curved-protruding stems, woody, glabrous, equipped with red, robust, arcuate, prickles, compressed and with elongated base. The rooting system is formed by long ramified roots, gnarled and carrying suckers. The stems and branches are arranged in a rather jumbled tangle, forming a drooping bush, almost semi-spherical. The gemmae are alternate, small, and reddish, often close to a prickle. The leaves are odd-pinnate, stipuled at the base, formed by 5-7 (9) oval or elliptic (13-35 x 10-25 mm), glabrous, segments with serrated edges and pointed apex.

The flowering is concentrated in May-June but at times the plant flowers again later on. The flowers do have 5 more or less intense pink petals, more rarely white, and arranged by 1-3 in terminal corymbs, with ob-cuneate petals; the petals are folded downwards after the blooming. The false fruits (hips) ripen in September-October, are pyriform (1-2 cm) of orange or red colour and contain several seeds (achenes), prismatic, yellowish, and surrounded by thick down.

The dog rose is a heliophilous and thermophilous species living in the degraded thickets with deciduous oaks, or, on mountains, with beech, fir, pine, the clearings of the riparian woods, the scrublands and hedges, from the plain up to 1500 (1900) metres above sea level, with preference for soils from neutral to tendentially calcareous, rich in sand and in gravel. 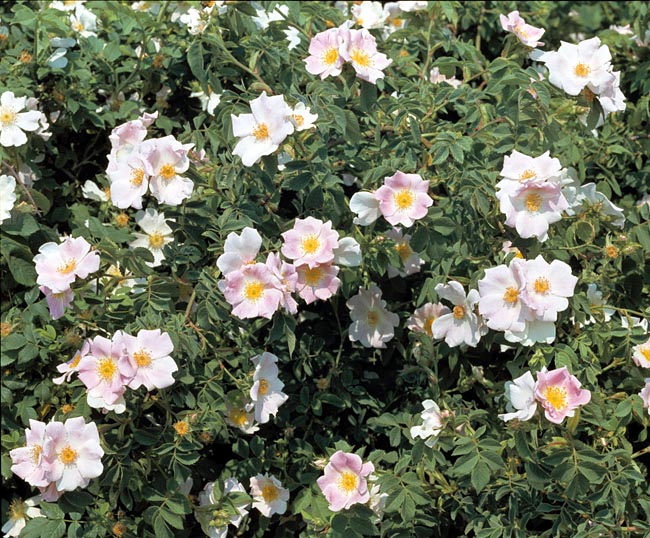 Endowed of rapid growth during the first years, then, once reached the development in 5-8 years, it settles and slows down.

The longevity is poor, it does not exceed, but some exceptions, the 50-60 years; the literature relates that close to the Hildesheim (Germany) Cathedral, lives, still now, a specimen of dog rose with a stem of 50 cm of diameter and about 300 years old!

Furthermore, thanks to the remarkable capacity of resprouting, the same individual may originate around it new vigorous shrubs.

Seen the limited dimensions of the stems, the wood is rarely utilized; only the longstanding roots were utilized, once, for doing handles of flatware, small kitchen objects, jewellery box sets, etc.

On the branches of the dog rose, especially in natural habitat, we can often observe some odd spherical formations formed by a tangle of filaments, initially green, then reddish and finally brown, due to the bite of an insect of the family of the hymenopterans called commonly bedeguar gall and zoologically speaking, the Diplolepis (Rhodites) rosae.

These, as well as other galls, are rich of tannins and in the past they were harvested for tanning the skins. The stinging hair contained in the hips, once dried, was kept in small envelopes and used as itchy “powder” in the carnival pranks.

For the herbology purposes the petals are to be harvested from the flowers when still in bud, and the floral receptacles, when turned red and fleshy, of the fruits (or, better, the false fruits or hips), in October. The petals contain gallic and quercitannic acid, resins, sugars, colouring substance, tannins and an essential oil with geraniol (petals), organic acids, flavonoids, pectins, polyphenols, leuco-antocyanins, catechin, vitamin A and vitamin E which confer their astringent, tonic and ophthalmic (the petals in decoction in the blepharpothalms) properties, as well as in the children constipation, in the diarrheas, dysenteries, hemoptyses, laryngotracheitis, anthelmintic against the ascarids.

The rose water and the attar of roses, prepared with the fresh petals of the dog rose, are known since the old times as valuable cosmetic throughout the entire Orient. Furthermore, the rose honey is considered as an excellent remedy for coughs and as a general strengthening in the febrile states. 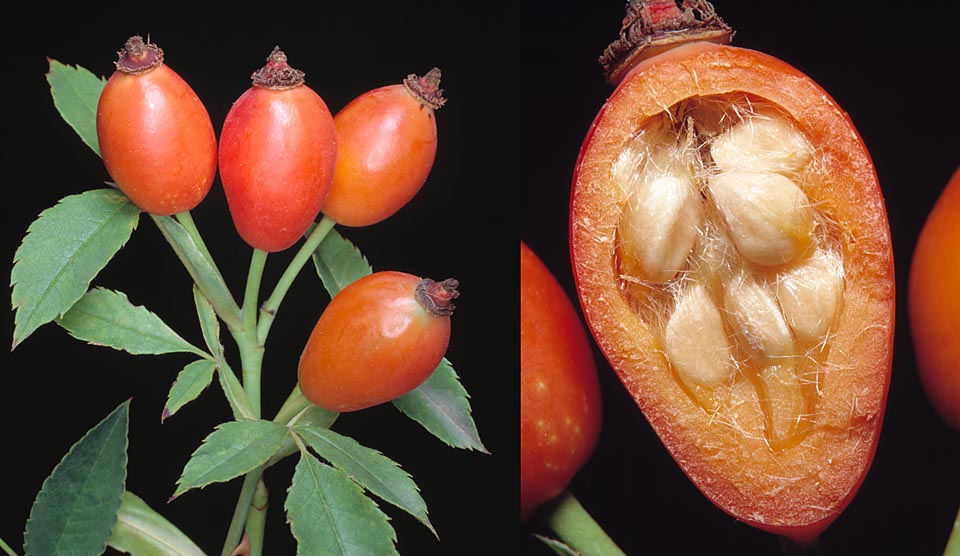 The well ripened hips, harvested by late autumn, duly cleaned inside from the seeds and from the irritating hair, serve for preparing delicious jams. They contain sugars, tannins, flavonoids (with important antioxidant action), ascorbic acid, that is vitamin C (in a dosage of 400 mg per 100 gm of clean fruits, 8 times more in weight than the lemon pulp), and other organic acids. They are used for preparing refreshing and slightly laxative preserves and for preparing infusions which are useful in the diseases of the genitourinary system, in cases of diabetes, in the scurvy. The assumption of vitamin C from the plants, compared to the synthetic one, means the bio-availability of carotenoids and of flavonoids which, acting in synergy with the ascorbic acid, improve its antioxidant properties.

The dog rose is one of the most important shrubs for the fauna: its leaves nourish some lepidopterans (i.e. Saturnia pavonia), the flowers are sought by coleopterans (i.e. Cetonia aurata), by bees, wasps and bumblebees; the fruits are eaten by mammals (hare, hedgehog) and by some birds (finches, grosbeaks, greenfinches). In phytotherapy and in phytocosmetic are known, since centuries, the properties of the wild rose, very ancient Chinese, Egyptian and Greek texts treat about them. The fruits, harvested when the pulp is ripe but still well firm and cleaned up from the seeds and the inner down, are an unusual but healthy food, very rich of vitamin C, eatable fresh as well as for preparing excellent jams. 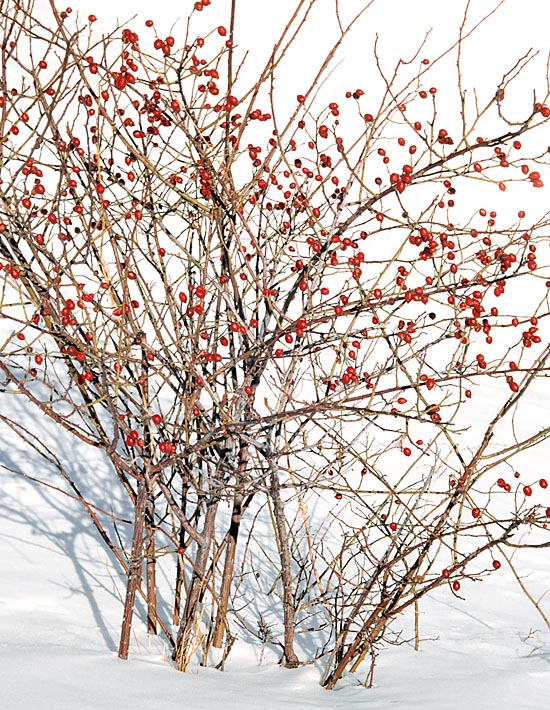 Some species of birds such as the blackbird and the fieldfare nourish of their pulp (blackbird, fieldfare, and blackcap). The family of the Rosaceae has very old origins as evidenced by the numerous findings dating back to the Eocene (about 60 million of years ago) found by the scholars of paleo-botany, from the main groups of this genus and in particular from some progenitive species spontaneous in Europe (Rosa moschata, Rosa gallica, Rosa phoenicea, Rosa canina, Rosa Pendulina) and in China (Rosa chinensis, Rosa gigantea, Rosa multiflora, Rosa foetida), have had their origin by hybridizing, especially from 1800 onwards, the cultivated ones which today embellish the rose gardens all over the world and the wild and rustic Rosa canina is still nowadays employed successfully as graft-carrier for many of these varieties. The reproduction of the dog rose may be done starting from the seed but, over all, in vegetative way by cutting in order to get quickly robust and strong plants.

A handful of fresh petals chopped and left to infuse in a pot of boiling water for fifteen minutes. To be filtered and sweetened with honey. Two cups per day, fasted in the morning and in the evening half an hour before going to bed.

To put a handful of very fresh petals, harvested preferably in the morning with dry weather, in a hermetically sealed glass jar, to cover them with a cup of boiling water and to be left macerating for twenty-four hours. To filter well squeezing the residue, add 300 g of fluid honey and shake from time to time till the whole is well amalgamated, leave to rest doe at least 15 days before using it. It is very suited for calming the teething disorders in infants and, diluted in water, for doing anti-inflammatory gargles.

Are needed 10 buds of dog rose deprived at the last moment of the peduncle and of the calyx (the green parts) which are to be put on the bottom of the bottle and add 750 cl of good Muscat grappa. To leave a couple of weeks in fresh and dark location before consuming.