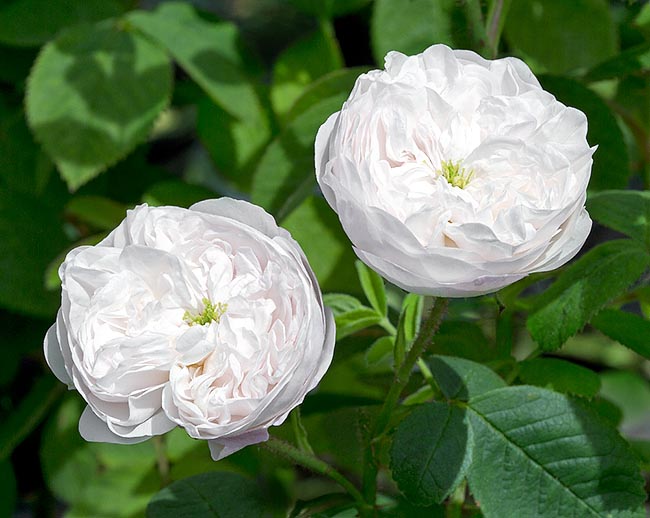 ‘Madame Hardy’, known also as “Félicité Hardy’, was born in France in 1831 at the hands of Julien-Alexandre Hardy, person in charge of the Luxembourg Gardens in Paris.

Some see it as a descendant of the highly perfumed Damascena, the famous Damask roses, taken from Persia to Europe, around the 1254, by the Crusaders getting back at Provins.

For others it should be a hybrid belonging to the group of the Centifolia, derived from old strains of Damascena mixed with the Rosa gallica officinalis and the Rosa canina. Starting from the second half of the XVIII century the efforts of the nurserymen in fact aimed to increase the number of the petals to make lasting as long as possible the inexorable “striptease of the flower”, until to get at roses with “hundred petals”, eventually superimposed like a cabbage according to tastes of the time.

‘Madame Hardy’ unluckily is not a remontant variety, but by sure has petals to spare, very perfumed, of an almost pure white colour with a characteristic green “eye” at the centre of the flower.

Vigourous shrub, even 2 m tall, with only one but prolonged spectacular spring-summer blooming. Small clusters of 3-4 flowers. The central one, usually bigger, may reach the 7 cm of diametre.

An exuberant variety that bears also the shade and shows an incredible resistance to the diseases, presently under study.

From tests performed in Canada it should be practically immune (0% - 5% of contamination in respect to other roses) to the rose black spot, the unaesthetic black spots on the leaves caused in humid ambients by the fungus Diplocarpon rosae.

In short, despite the years, it is an easy rose and of great effect that is worthy to be kept in garden. But be careful when you cut the branches, because they are extremely thorny.