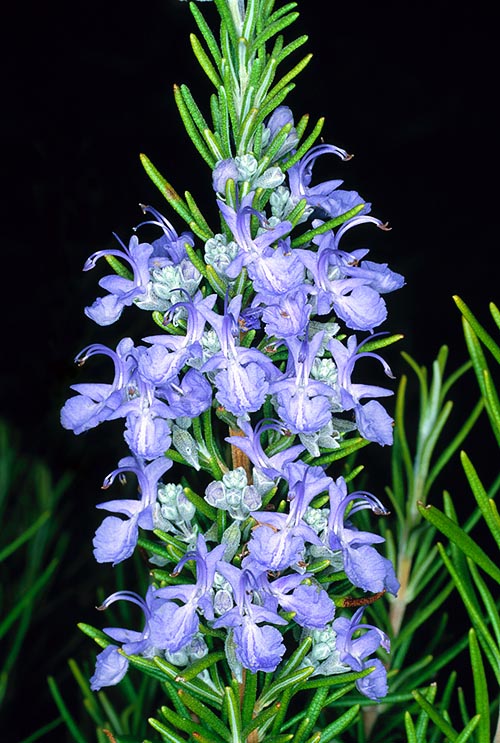 Rosmarinus officinalis is known since old times for its medicinal virtues © G. Mazza

The Rosemary (Rosmarinus officinalis L., 1753) is a species in the family Lamiaceae that is mainly distributed in the western part of the Mediterranean basin, in Europe (from Portugal to the southeast of the Italian peninsula) and in North Africa ( from northeast Morocco to Libya), that is, in the olive region, although it is largely absent from the Adriatic and eastern Mediterranean coast. Naturalized in Crete, Cyprus, Crimea and the Caucasus.

The name of the genus “rosmarinus” has come from the two Latin terms “ros”, “roris”, dew and “marini”, “marinus”, of the sea, or “marine” due to the growth localized along the garrigue and the low thickets of the Mediterranean and the delicate light blue similar to the rippling waves of the sea, or because, as the ancients wrote, “This plant gets the vapours of the sea which fall under form of dew”. For other authors it should come from the Greek “rhops”, shrub, and “myrnos”, perfumed, due to its aromatic virtues.

The name of the species “officinalis” finds its origin in the Latin substantive “officina”, that is, pharmaceutical workshop, used for most of the plants having medicinal properties employed in the “officinae” as were called the pharmacies of yore. It is an evergreen, perennial bushy plant (Nanophanerophyte), much ramified, with intense, pleasant, aromatic scent, 30 cm to 1,5 (2,5 m) tall, with prostrate or ascending branches, very ramose, rarely erect, with white deciduous hairs when young, and brown-pale bark. Woody, ramified taproot.

It has sessile, 15-20 x 2-2,5 mm leaves, linear, coriaceous, opposite, revolute on the edge, dark green and glossy above, whitish-tomentose below. Inflorescence in terminal and axilalr short racemes carrying 4-16 sub-sessile flowers. The flowering lasts from April to August (all the months of the year in the islands and along the coast n particularly sheltered locations).

Corolla of 10-12 mm, with concave upper labium, bilobate and the lower trifid with median lobe much greater than the lateral ones and crenulated, light blue or lilac, rarely pinkish or white; 5-6 mm campanulate calyx, bilabiate, pubescent due to stellate hairs as well as on the peduncle. The fruit is formed by a small, dry capsule with oblong, smooth and brown seeds.

It grows spontaneous along the Mediterranean coasts, on calcareous rock, arid marine locations, woods of Aleppo pines and domestic pine, also in rupestrian stations of the western banks of the upper Lake Garda, widely cultivated and grown wild in many sites (0-800 m). In southeast Spain and in North Africa is present also the Rosmarinus eriocalix Jordan & Fourr.(1866) which grows on calcareous rocks and distinguished from the officinalis as having smaller (5-15 mm) leaves, inflorescence with stellate hairs and long glandular hairs and grey branches.

The rosemary is also a nice and rustic ornamental plant, nowadays available in various cultivars, which must be placed in light soils, where the water does not stagnate and in sunny positions, better if sheltered by a wall or on calcareous rocks where, in its drooping varieties (ad es. ‘Corsicus prostratus’ and ‘Lavandulaceus’) is very elegant. Other interesting varieties are the ‘Pyramidals’, and the ‘Erectus albus’, the ‘Majorka Pink’ with its unusual pink flowers or the ‘Tuscan Blue’ which has them deep blue, or yet, for those having not much room or only a windowsill it can use the ‘Severn Sea’, with its contained development and arcuate and morbid branches. I remind that many varieties of ornamental rosemary have little pleasant aroma due to excess of some components such as the camphor and the resin, therefore it is good thing to employ, for alimentary and medicinal purposes, only the wild species.

The reproduction of the rosemary can be done by gamic way (through the seeds) or by vegetative way (by means of semi-woody cuttings). Since the old times this bush has been used as aromatic plant in the Mediterranean cuisine, in particular for the roasts and as seasoning for vegetables, ragouts, pies and quiches, besides as medicinal plant; and has spread everywhere in the whole area of vine and olive, often grown wild in the zones most exposed to the sun and with mild climate. 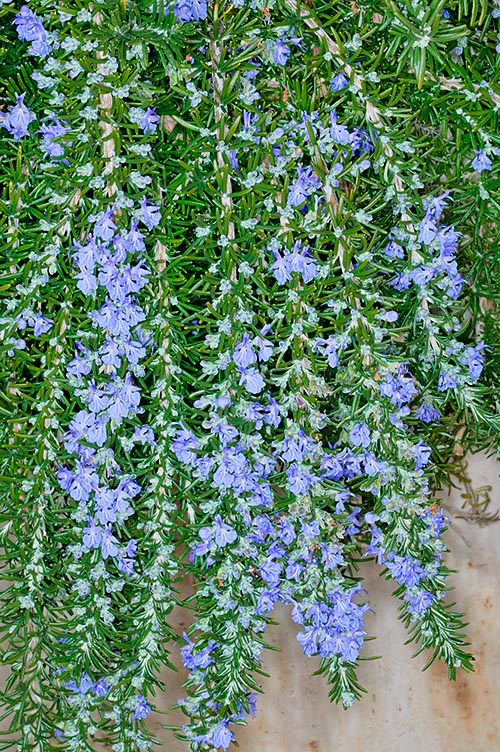 The old Greeks, who did call this species libanotis, and the Romans indicated it as the plant of beauty, of youth, of love and of happiness and did burn it like the incense. It was sacred to Aphrodite until when it was replaced by the myrtle. It was a harbinger of magical powers and was one of the components in the love potions and in the auspicious filters, and was the base of the famous “Acqua Celeste” of Caterina Sforza and of the water of the Queen of Hungary.

The Rosemary fully entered the gardens and the “hortuli” of the Middle Age, cultivated along with famous medicinal plants such as the mallow, the sage, the rue, the wormwood and others who made famous the abbeys and the convents for their officinal preparations. In an old book of botany I find this advice: “He who has bad breath and pale face, has to eat every morning flowers of rosemary with bread and salt!”. The rosemary flowers produce abundant nectar and are therefore much visited by the bees and the beekeepers get from it a very perfumed and excellent balsamic honey, known also as Narbonne honey.

The leaves of rosemary are harvested from May to July and contain 1 to 2,5% of essential oil formed by cineol, camphor, alpha pinene, borneol, limonene; rosmarinic, labiatic, chlorogenic, caffeic acids, etc., bitter diterpenic principles (carnosol, rosemarinol, verbenol, rosmadial, etc.), flavonoids, triterpenic acides and alcohols, choline, tannins and resins. These active principles are used in phytotherapy as stomachic and carminative in the digestive troubles, the flatulence, the sense of fullness and the headaches from poor digestion, as mildly choleretic, as well as for stimulating the appetite and the gastric secretion; it has also emmenagogic, hypoglycaemic and hypocholesterolemic action.

For external use, they are utilized under form of oils for the skin and analgesic ointments against the muscle and joints rheumatisms, as well as for revulsive, topical, hyperemiating and defatigating acting baths, repellent for the insects (in the past, before the utilization of the synthetic insecticides, it was successfully used against the pubic lice). It is sought in liqueur, perfume and soap makings whilst in the alimentary industry it is used as flavouring as well as preserver and anti-oxidant especially for meats and fats.

The internal use is to be avoided during pregnancy and we remind that the essential oil, if assumed at high dosage, can cause convulsions, gastroenteritis and nephritis.

Digestive, invigorating and nerve tonic in the cases of mental burn out

A teaspoon of dried leaves crumbled in a cup of boiling water. Leave to infuse for fifteen minutes, filter, sweeten with honey and drink after the main meals.

To be prepared in summer with two handfuls of flowered tops and of crushed leaves in a pot or a glass bottle with half a litre of olive oil. To macerate in the sun for one month, to filter squeezing the residual with a masher. To employ warmed at 40 °C in water bath for frictions and massages on the aching parts.