The genus was honoured by Linnaeus to the Swedish botanist Olof Johannes Rudbeck (1630-1702), founder of the Uppsala Botanical Garden, and to his son, Olof Olai Rudbeck (1660-1740), botanist too; the Latin name of the species, “fulgida” = shining, bright, refers to the bright yellow colour of its flowers.

The Rudbeckia fulgida Aiton (1789) is a perennial, herbaceous plant, stoloniferous, much variable, from 0,4 to 1,2 m tall, with glabrous or ragged ramified stems and dark green leaves, hairless or pubescent, more or less rough to the touch. The basal leaves, on a long petiole, are ovate or elliptic, 5 to 30 cm long and 1 to 8 cm broad, with sharp apex and entire or indented margin; the intermediate ones, on a short petiole, have the same characteristics, but are gradually reduced in length, finally, the upper ones are lanceolate or oblancelate and sessile. 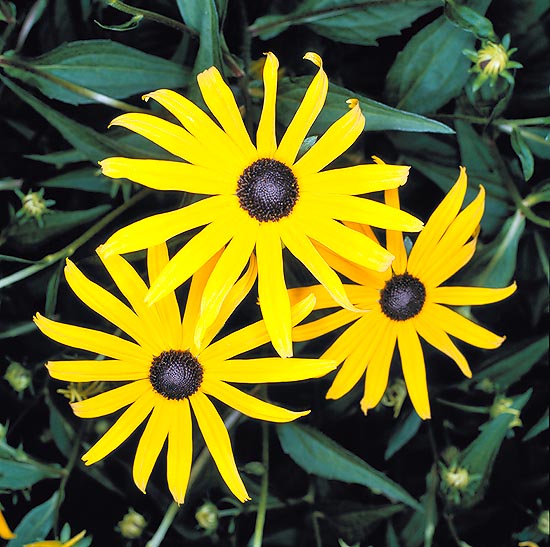 The inflorescences, up to 7 cm of diameter, single or corymbous, on a long peduncle, are the typical flower heads of the Asteraceae, formed by a host of sessile flowers spirally inserted on a hemispherical or ovoid base, the receptacle, surrounded by an involucre formed by green, oblong-lanceolate, bracts, outstretched or slightly curved, 1,5 to 2 cm long and 0,5 cm broad.

The 10-15 flowers of the outer ring, called ray florets, have an elliptic or oblanceolate corolla, 1,5-2,5 cm long and 0,4-0,7 cm broad, formed by five petals joined together, of bright orange-yellow colour. The ray florets are sterile, and have the function of attracting the attention of the pollinator, like the petals of a single flower. Inside the ring are some hundreds of fertile flowers, called disc florets, about 3 mm long, with a tubular corolla with five purple brown lobes.

The fruits, containing one seed only and called achenes (or, more precisely, cypselae), in the Asteraceae, are blackish, 0,2-0,4 cm long, with quadrangular section, and surmounted by the pappus, the modified calyx of the flower, formed by a just outlined corona. It easily reproduces by seed, which may be placed directly on the ground, and by division in spring or late autumn. It self-disseminates and, in some instances, may become invasive.

Due to the abundant summer-autumn blooming, the bright orange yellow contrasting with the dark purple of the centre, the resistance to the high as well as to the low temperatures, even to -30 °C, it is one of the most cultivated herbaceous plants, in particular the countless varieties which have been selected during the time, even if the most appreciated plant remains the ‘Goldsturm’, selected in Germany in 1937, with flower heads up to 10 cm of diameter, considered as, by sure, one of the most flourishing plants. The plant is also the floral emblem of the state of Maryland.

It is not particularly requiring about the soil, provided the same is humid, but draining, without water stagnations; the growth, of course, will be more luxuriant on fertile soils, rich of humus, also the blooming will be richer and will expand more quickly. The best exposition is in full sun, it stands also a light shade, in which case the blooming will be less abundant, but with at least half a day of direct sun.

It has a good resistance to diseases, only in vey humid locations it may be attacked by fungi which will spoil its foliage. By the end of the blooming, by late autumn, when the aerial part begins to dry up, and consequently the appearance begins little attractive, it is to be pruned low. Finally, it is an excellent pot plant, to be cultivated with the same aforementioned modalities, and as cut-flower.

Rudbeckia fulgida was last modified: May 3rd, 2018 by Giuseppe Mazza