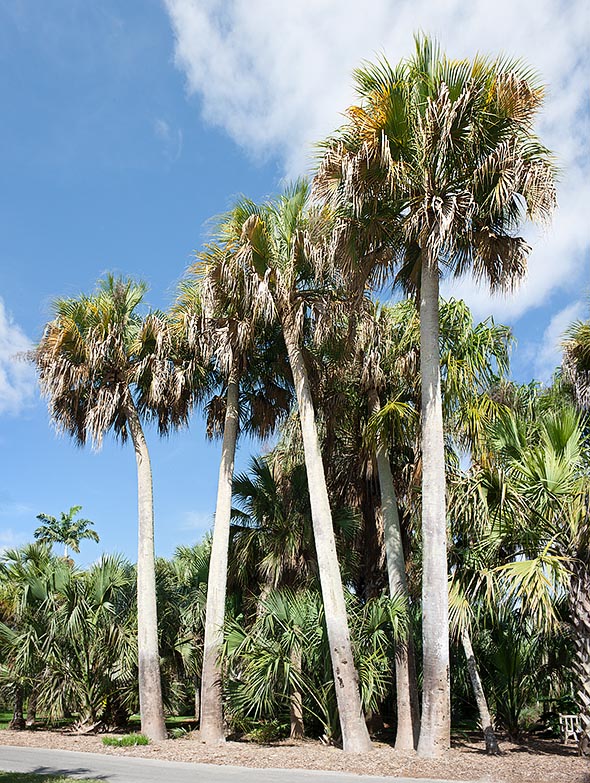 The species is native to Haiti, the Leeward Antilles, Puerto Rico and Dominican Republic, where it grows along the coasts or in the valleys on mainly sandy soils up to about 100 m of altitude.

The etymology of the genus is unknown, as it has not been specified by the author, the French botanist Michel Adanson (1727-1806); the name of the species is the plural genitive of the female Latin substantive “causia”, a white felt hat with wide brims used by the ancient Macedonians for protecting themselves from the sun, with reference to the leaves utilized for producing hats.

The Sabal causiarum (O.F.Cook) Becc. (1908) is a solitary, monoecious species, with smooth, greyish columnar stem, up to more than 10 m tall with a diameter of 40-70 cm, but which, in some specimens, may exceed one metre.

The leaves, on unarmed, 1-1,5 m long petiole, are costapalmate (palmate leaves where the petiole prolongs in the lamina for almost all its length forming in the lower page a prominent and curved downward nervation), 1,5-2 m long and broad, usually of a bright green colour, at times glaucous green, subdivided into 60-120 rigid segments, united at the base for about half of their length, with numerous thin filaments along the margins.

Unlike other species belonging to the genus, the foliar bases are not persistent, but get off from the stem together with the leaves once dry, leaving the stem without any residual. The inflorescences, ramified, curved or hanging, which extend beyond the crown, arise among the leaves and carry white hermaphrodite flowers, slightly scented, about 0,4 cm long; the fruits are globose or globose-pyriform of dark brown or blackish colour, of 0,8-1,2 cm of diameter, containing one globose-depressed seed, of 0,6-1 cm of diameter, of glossy dark brown colour. It reproduces by seed in sandy soil kept humid at the temperature of 20-22 °C, the germination occurs in about 2 months. Imposing, rather slow growing species, especially when young, it is cultivable in full sun in the tropical, subtropical and warm temperate climate zones, where adult individuals may resist to temperatures as low as about -9 °C for a short period with a minimum damage to the foliage.

It is not particular for what the soil is concerned, provided the same is perfectly draining; well rooted plants can resist to drought periods, but it takes advantage, with a faster growth, from regular waterings, besides fertilizations, especially when young. Of huge ornamental effect, as isolated specimen as well as in group or in rows on the road sides.

The leaves are locally utilized as covers for the rural constructions and for making hats, bags and other handicrafted objects.