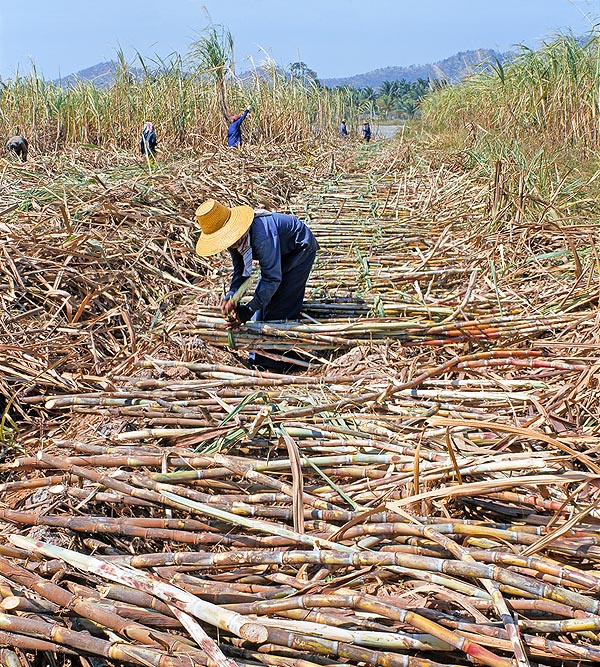 Cultivated since remote times, it is thought to be native to the regions bordering the Bengal Gulf.

The name of the species is the plural genitive of the Latin word “officina” = workshop, in the sense of a pharmaceutical laboratory.

The Saccharum officinarum L. (1753) is a perennial, caespitose, herbaceous species, with robust rhizomes and straight or rising stems (culms), 3 to 6 m tall, and with a diameter of 2-5 cm.

Their colour varies from the red to the purple or to the green, with various intensity, at times with longitudinal yellow or reddish stripes.

The internodes are 10-25 cm long, the shortest being placed in the lower part, with a morbid and juicy internal tissue.

The foliar sheaths wrapping the stem are imbricate and protect a bud which is present in each node.

The leaves are alternate, distich (placed on two opposite rows on a same level), linear, 0,7-1,5 m long and 4-6 cm broad, with cutting and finely toothed edges.

Of a colour varying from the pale to the dark green, they have an ample central nervation, white and concave on the upper part, prominent and green below. 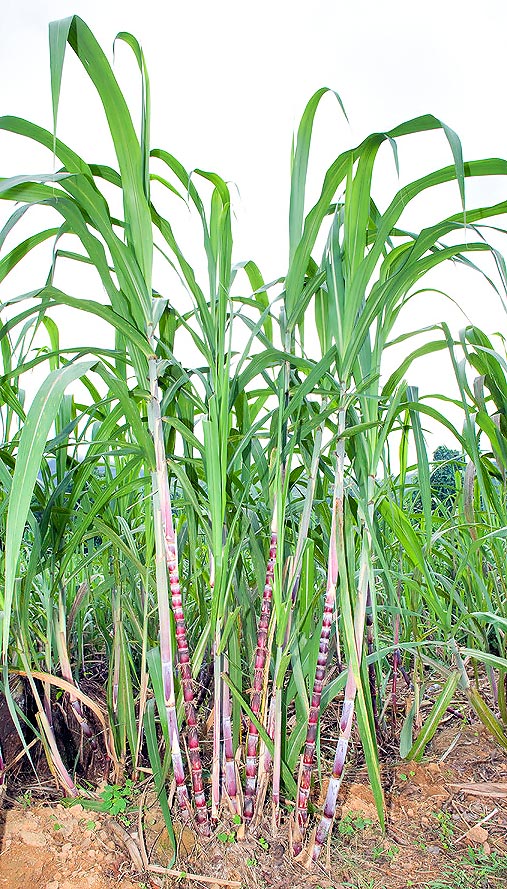 The sugar mainly condensates in the low internodes © Giuseppe Mazza

It reproduces by seed, but only in the programmes of genetic improvement.

Industrially, it happens by portions of stem, containing at least 2-3 nodes, placed horizontally and covered by a layer of soil, the primary culm will originate from one of the buds present at the nodes.

The sugarcane is cultivated in full sun in the tropical climate zones and in the subtropical ones with a minimum annual rainfall of 1000 mm.

But in the past it was observed also in warm temperate areas, such as Sicily and the south of Spain, obviously with a poorer performance.

The lengthening of the culms, stops, in fact, already at a temperature around the + 18 °C, even if the plant may survive to temperatures as low as about -7 °C for a very short time, thanks to the buds placed in the lower part, the only ones which may remain unscathed at these temperatures.

It grows in various types of soil, even if it prefers the sandy and draining ones.

Many clones of sugarcane nowadays commercially cultivated are actually, on the basis of genetic studies, complicated hybrids between Saccharum officinarum L., Saccharum robustum E.W.Brandes & Jeswiet ex Grassl (1946) and Saccharum spontaneum L. with a prevalence of chromosomes of the officinarum.

Depending on its cultivation area, the cane is ready for the harvesting between 10 and 24 months.

Harvesting must be done before the blooming, which would happen, in part, at detriment of the sugar contained in the stem.

For a good yield, they have to cut this plant as much as possible close to the ground, because it is in this part, close to the roots that the largest amount of sugar is located.

The extraction is done by repeatedly pressing the canes.

The juice thus obtained is boiled, crystallized and separated from the liquid part (molasses) by centrifugation and finally refined up to the 99.8% of sucrose.

Nothing is wasted. The molasses, which represents the processing residual, is utilized in several ways, as sweetener, for producing alcohol and, not last, the rum.

The leaves and the residual of the pressing of the canes (bagasse) are employed as food for the livestock. 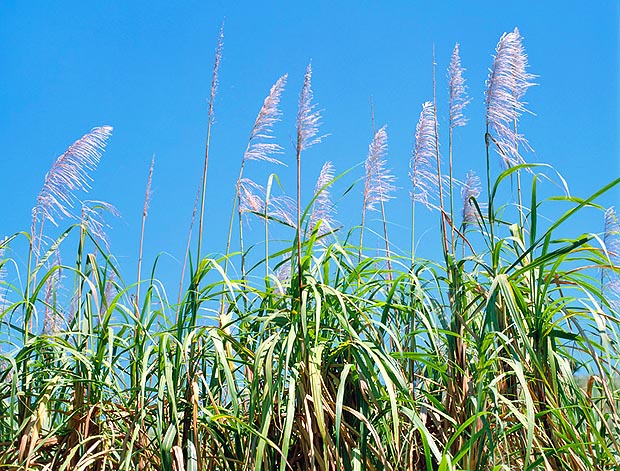 The bagasse is utilized also as fuel and in the fabrication of paper and cardboard.

Several parts of the plant are utilized in the traditional medicine. Extracts have revealed, in laboratory studies, their potentiality in various pathologies with analgesic, antiinflammatory, antioxidant, immunostimulant, hypocholesterolemic, anti-osteoporotic, etc.