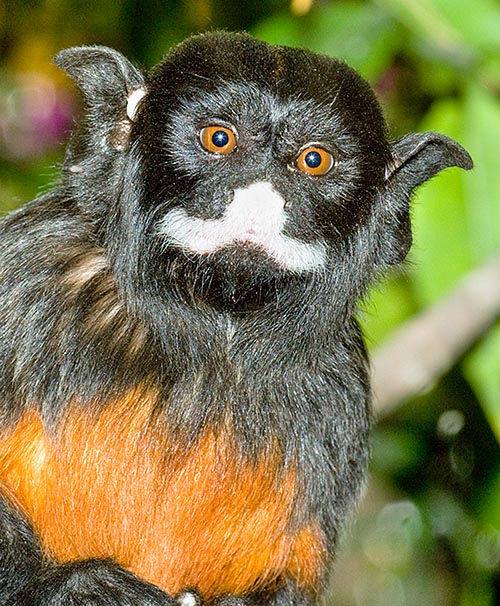 Saguinus labiatus is a South American small monkey that seems having put the snout in a white paint tin. Actually this showy spot and the red belly camouflage the animal in the contrasts light-shade of the forest where it lives © Giuseppe Mazza

The Red-bellied tamarin (Saguinus labiatus E. Geoffroy in Humboldt, 1812), known also under the name of White-lipped tamarin, is a platyrrhine primate of the family Cebidae, included in the subfamily Callitrichinae. Besides the genus Saguinus, the subfamily includes also the genera Leontopithecus (that is, the lion tamarins, the biggest species of the subfamily, called in this way because of the presence of a “mane” of hair surrounding the face), Callimico (including only the Goeldi’s monkey Callimico goeldii) and Callithrix (including all the species of uistitì, called also marmosets).

It lives in South America, present with a particularly high density in the north-western part of Bolivia, but is also found in south-eastern Peru and in the Brazilian Amazonia.

The pluvial forests of Amazonia represent the typical habitat of the species. The red-bellied tamarins spend most of their time in the primary and secondary forests and stand usually at heights of about 10 m from the ground, which means, at a level of intermediate “canopy” (the top of the forest composed by the crowns of the trees). Conversely, they avoid the periodically flooded forests, limiting themselves to frequent them only when they are dry. They are diurnal and arboricolous; they nourish without ever going down to the ground. Omnivorous, they love particularly the fruits, which form about the 60% of their diet.

They eat the fruits of several vegetable species, first of all those belonging to the family Moraceae, but they do not disdain Cecropia sciadophylla, Pseudolmedia rigida and Pourouma cecropiaefoli. When the fruits begin to be lacking (June to August), they nourish also of insects, mainly of the family of the Orthopterans, small invertebrates such as frogs, lizards and small snakes, as well as of nectar and vegetable exudates (gum, lymph and latex).

However the absence of great and protruding incisors means that the consumption of vegetable products is mostly sporadic, excepting the resins of Parkia pendula, which exude from a fruit shaped like a bean, allowing the tamarins and many other species to eat it easily, without damages to the plant and without having the necessity of a particularly strong teeth. 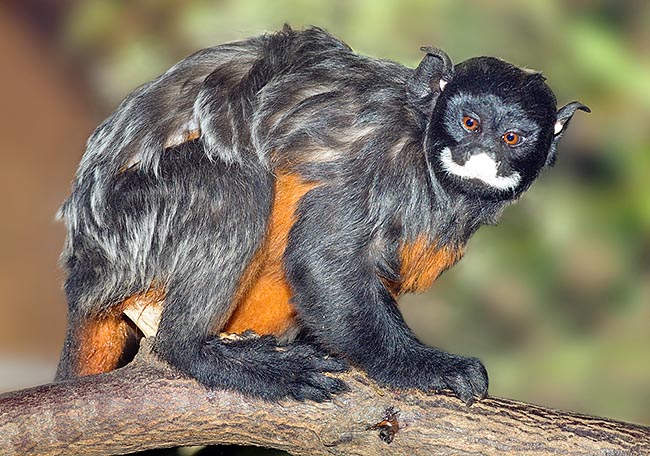 Just 23-29 cm, but the tail, and 350-575 g. For these unarmed primates the only defence is the group alertness and the escape. It mainly eats fruits, but also insects and small vertebrates it finds among the branches © Mazza

In their turn, they represent a source of food for numerous species such as the Jaguar (Panthera onca), the Crested eagle (Morphnus guianensis), the Tayra (Eira barbara, a mustelid of Central America), the Spectacled owl (Pulsatrix perspicillata), the Great horned owl (Bubo virginianus), the Ocelot (Leopardus pardalis), the Capuchin monkeys (Cebus spp.), and snakes such as the boa, colubrids and vipers.

Their appearance is, to say the least, striking: small black little monkeys which seem to have quenched their thirst drinking from a tin of white paint. In fact, catches the eye the zone of the lips, completely white, to form a sort of moustaches, as well as the rust red colouring the abdomen, the chest and the inner part of the limbs, in clear contrast with the rest of the dark coloured hair, with possible white hairs scattered on the body, or on the ears, which may even get to be completely white them too. They are small: 23 to 29 cm long per 350-575 g of weight; the females have slightly bigger dimensions than the males. They have a very long tail, that can reach the same size of the whole body, or even exceed it (it can be even 10 cm longer than the body). Including the tail, in fact, the red-bellied tamarins can reach even the 70 cm. They have non opposable thumbs and claw-shaped nails on all fingers, but the halluces, provided of wide and flat nails. The hind limbs are slightly longer than the fore ones.

For defending themselves from the predators, which we have seen being numerous, the red-bellied tamarind has adopted a complex defence system: it lives in groups, uses a series of signals to communicate the danger to the others and sleeps in a very smart cryptic position. Let us examine these defence strategies one by one: the tamarins live in groups of 2 to 13 individuals, even if typically they consist of 4-6 members. Being small, they are always very careful and constantly control the space surrounding them in order to be able to sight at once possible predators. 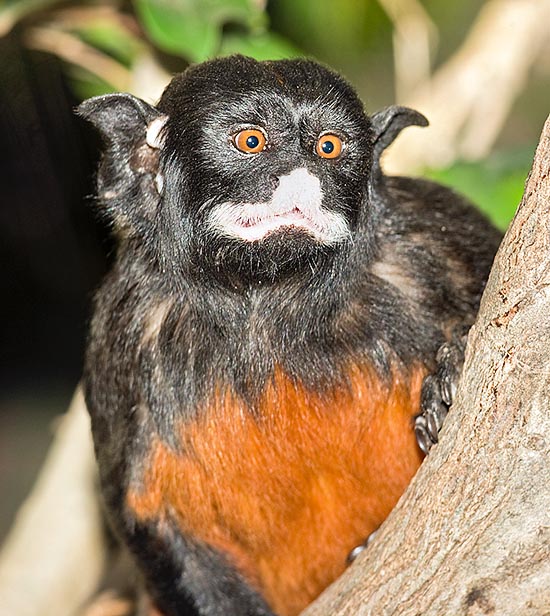 In the 2-13 units groups, there is a dominant pair, but all keep watch emitting different alarm sounds depending on the predator. For a better watch, without running the risk of an increase of competition for the food or for mating, at times they coexist with similar species © G. Mazza

All adult members of the group are engaged in this activity of “monitoring” of the habitat, and the more the group is numerous, the more is effective the strategy: being so many, each individual will have to spend less time scanning the horizon and the level of alertness will be, overall, always very high. As a matter of fact, once a member sights a danger, he emits an alarm vocalization, which differs depending on the type of predator, for communicating the others the impending danger.

In order to increase even more the level of alertness, without incurring the risk of an increase in the competition for the food or for the coupling, it is not unusual that the tamarins form “multi-species” groups and cohabit with the Brown-mantled tamarin (Saguinus fuscicollis) or the Goeldi’s marmoset (Callimico goeldii). Finally, the tamarins do not lower the alert level even when they are sleeping: usually they prefer well hidden caches, always at a certain height from the ground, and assume a particular position with the head sunk between the shoulders and the tail wrapped around the body. In this way, they hide the white muzzle to the sight of possible predators, thus becoming particularly difficult to be found.

For what their reproductive system is concerned, this may be defined as substantially monogamous, as genetic studies have confirmed that only one male and one female are the parents of all the young present inside the group. However, even if only two individuals reproduce actively, the other adults belonging to the group play an equally important role: they are defined “helpers”, and cooperate with the parents in caring the young of the group.

A typical group of tamarns is formed, in fact, by two dominant individuals, that are the reproducing ones, by their progeny and by the helper males. Their duty, in the specific, at least for the first 2 months of life of the young, it seems to be especially that of transporting them, whilst the mother is busy in nourishing them with her milk. After weaning, which occurs after 4 months from the birth, the progeny begins to nourish of solid food furnished mainly rightly by the helpers, especially the oldest ones of the group, who share with the young the food, activity to which not always the father participates.

These very useful helpers are often related to one of the two dominant individuals, usually they are brothers or siblings, but this does not mean that they are relegated to this role for ever: at times it happens that two groups of tamarins interact and in these occasions the helpers of a group can take advantage of possible situations of instability inside the other group for trying to succeed in becoming dominant individuals. 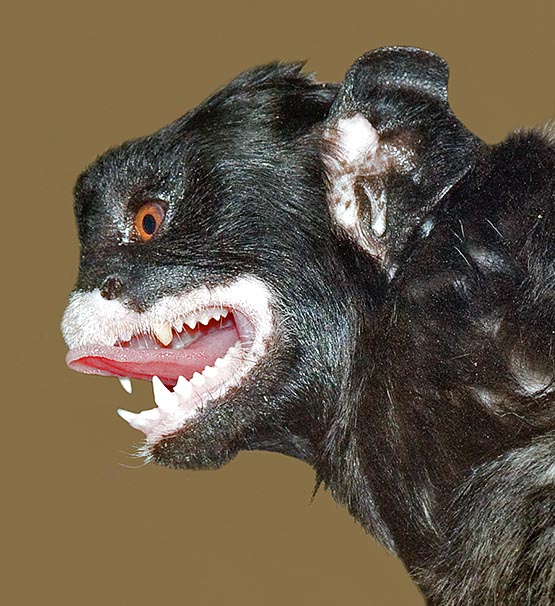 Its longevity in the wild is unknown, but is estimated to be of about 8 years basing on the teeth wear © Giuseppe Mazza

The reproductive period goes from March to June, even if in captivity the tamarins can reproduce in whatever season, and the gestate lasts about five months. Usually the delivery is twinned, with the birth of two newborns of about 40 g of weight each, but occasionally there can be deliveries with one single baby. The independence from the mother is reached around the 1-2 years of age, whilst the sexual maturity is gotten from the 2 and 4 years.

A key role in the reproduction, as well as in the defence from the predators, is carried out by the advanced system of communication of this species. They communicate, besides by means of vocalizations, also through the production of odorous substances done by glands present in various regions of their body. The size and the use of these glands vary depending on the sex: usually the females produce odorous trails more frequently than the males, especially because, when they are fertile, these trails have the function of attracting the reproducing males and of communicating them their receptivity. Conversely, the dominant males appear to produce odorous trails more often than the other males of the group and that especially the use of the glands is particularly frequent mainly in occasion of encounters between two different groups.

Information heartening us: in the IUCN Red List it is inserted in the Least Concern category (LC), category adopted for the species not risking the extinction in the short or medium term. This lucky position in the ranking is due to its equally fortunate geographic range: it occupies the Amazonian forest areas with the lowest level of anthropic disturbance. Obviously, as is the case for all the other animal species, the man has always the task to act in way that the tamarin does not change its position in the ranking and continues to populate the “privileged” category of the species that can, at least for the moment, continue to sleep soundly. However, like other many species, it is extremely sensible to the destruction of the forests and to the fragmentation, especially in the western zone of the Pando region, in Bolivia, and in south-eastern Peru. In the wild, the red-bellied tamarins do not frequently interact with the man, even if they are occasionally hunted or “adopted” as pet animals. In any case when in captivity, these animals have proven very useful as object of studies concerning the Hepatitis virus (HAV), of which, exactly as for the man, they are hosts: presently a lot of what is known about this virus is due rightly to the studies done on this species.

Little is known about the longevity of the red-bellied tamarins, but in the wild the individuals for whom, on the base of the teeth wear, an age of about 8 years is estimated, are considered as “old”.