The species is native to Java and Sumatra where it grows in the underwood of the humid forests, often in swampy areas and along the banks of water streams, at low altitudes.

Both names, generic and specific, come from the Malay local one, “salak” or “zalak”.

The Salacca zalacca (Gaertn.) Voss (1895) is a dioecious species, cespitous, creeping, acaulescent or with up to 1,5 m long stems, that root when in contact with the soil, and superficial root system. 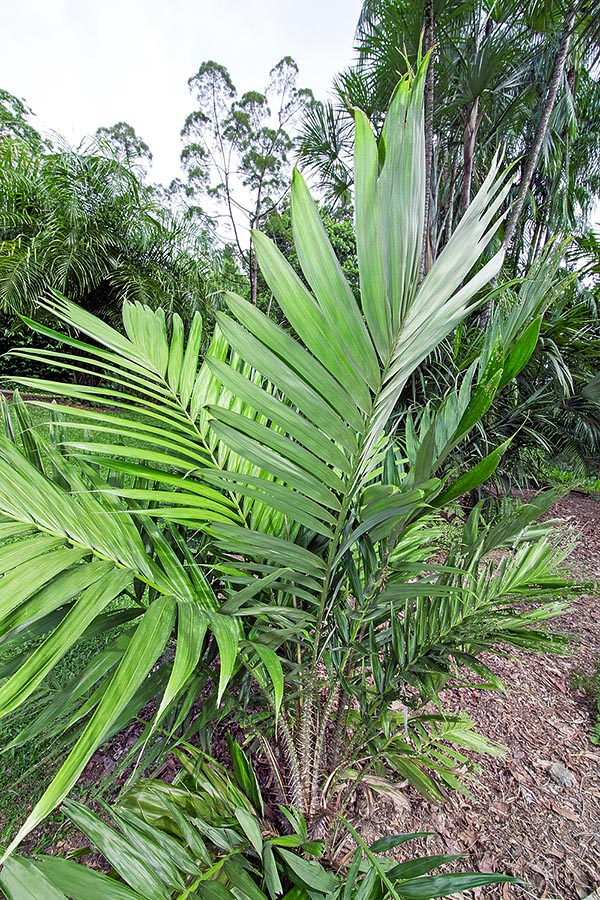 Native to Java and Sumatra, the alacca zalacca is a creeping cespitous species with 2 m petioles, very spiny, that well suit for creating impenetrable barriers. It is amply cultivated in South-East Asia, with horticultural varieties, also for the tasty pyriform fruits, 5-8 cm long, with their crispy pulp © G. Mazza

Leaves, on an up to 2 m long petiole, pinnate, long even more than 6 m, with lanceolate leaflets with long pointed apex irregularly arranged along the rachis, 20-80 cm long and 2-8 cm broad, of glossy dark green colour above, pale green below. Foliar sheath, petiole and rachis are thickly armed with robust spines of various length, up to more than 10 cm long, and direction, of grey to blackish colour.

Ovoid or pyriform fruit with thin apex, 5-8 cm long and of 5 cm of diameter, covered by imbricate scales with brown reddish pointed apex, that remind the snake skin, with inside 1-3 quarters, usually unequal, formed by edible pulp covered by a thin membrane (inedible), usually containing each one a big trigonal seed of dark brown colour, 2-3 cm long and 1,5-2,5 cm thick.

It usually reproduces by seed, that taken off from the fruit has a germinability lasting less than 2 weeks, directly planted or in plant nursery, in perfectly draining organic loam maintained humid at the temperature of 26-28 °C, with germination times of some days, if just taken off from the fruit, and first blooming after 3-4 years. In order to maintain the characteristics of a certain variety recourse is done to the division, the micropropagation and to the suckers that grow at the base of the plant, even if with rather low percentages of success. By seed the number of male plants is slightly bigger than that of the fermale, but for an abundant fructification it’s sufficient to interpolate a number comprised between the 5 and the 20%.

Species, with its horticultural varieties, amply cultivated in the warm-humid regions of South-East Asia for its fruits, marketed locally and partly exported, with crispy and sweet pulp, if perfectly ripe, of white yellowish to brown colour, consumed fresh or utilized for preserves, candies, juices or in syrup; the unripe fruits, having an aciduloud and astringent taste, are also utilized for salads. It requires a partial shade during the first stages of growth, then even full sun, high temperatures, usually over the 20 °C and in any case never under the 10 °C, and annual rainfall over the 1800 mm, well distributed, otherwise is to be abundantly irrigated, and light soils, draining, rich of organic substance, slightly acidic to neutral, in these conditions blooms and fructifies almost continuously. Due to its robust spines it is at times utilized for creating impenetrable barriers.