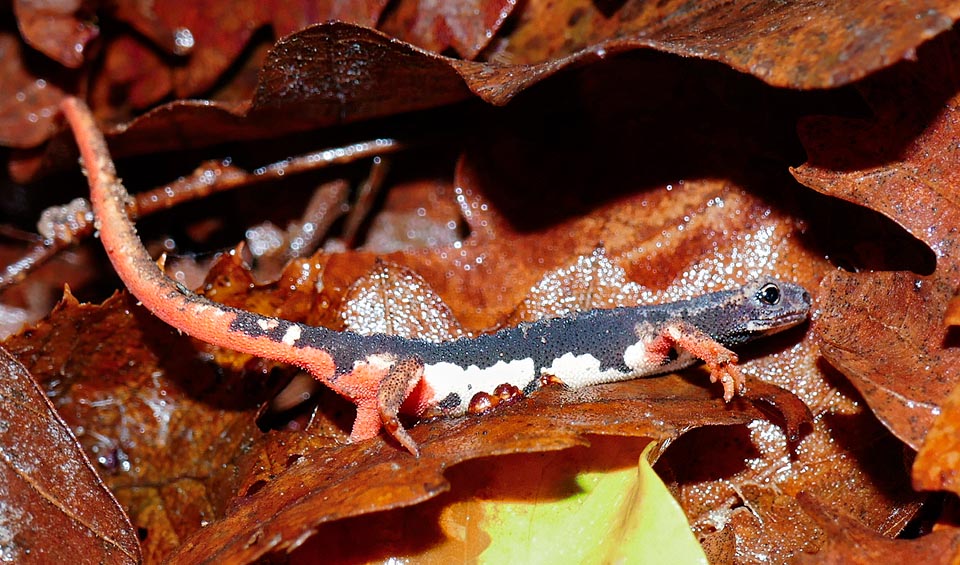 Salamandrina perspicillata is a species endemic to Apenninic Italy, from south-east Piedmont to northern Campania. Is more frequent and better distributed on the Tyrrhenian side from the sea level up to about 1500 m where however is particularly present on the hilly belt between 200 and 700 m above sea level © Luca Tringali 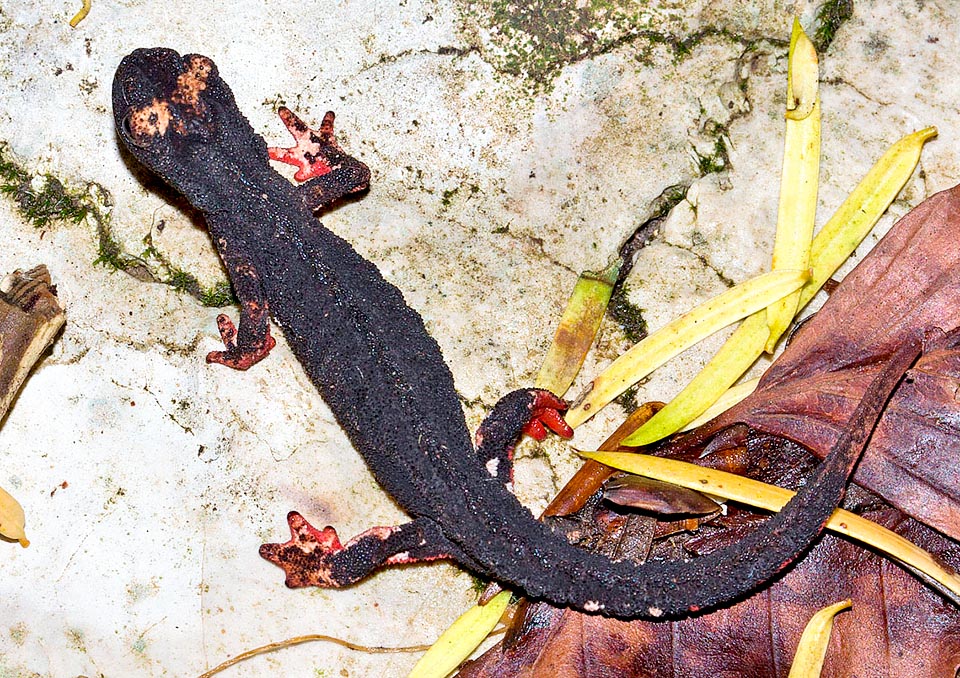 From a few metres above the sea level up to about 1900 m of altitude, Salamandrina perspicillata is an endemic species to Apenninic Italy, from south-eastern Piedmont to northern Campania; Salamandrina terdigitata is a species endemic to Apenninic Italy, from southern Campania to Calabria (Aspromonte); a small overlapping area exists where the two species are sympatric. 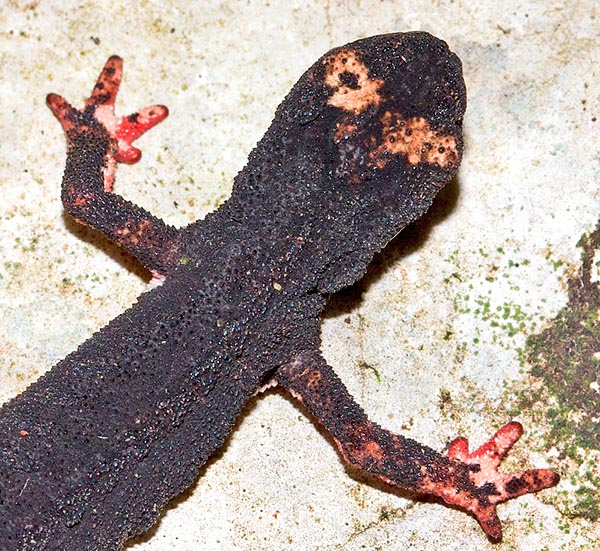 In the genus Salamandrina also the hind limbs have four digits, unlike the other Italian caudates whose foot is pentadactyl. The typical pale spots on the head tend to form a V drawing, even if here they are not well joined and defined as Salamandrina terdigitata. Maybe they simulate fake eyes mistaking predators © Giorgio Venturini

Savi’s spectacled salamander is a species diffused with a relative continuity along the whole Apennine span; in Central Italy abounds in several stations of Abruzzo and Lazio; in this last region is present on the Laga Mountains, the Simbruini Mountains, the Lepini, Hernici and Ausoni-Aurunci Mountains besides many stations of the hilly plain; fairly numerous populations are also present in the Roman Campagna. The species is more frequent and regularly distributed on the Tyrrhenian side, from the sea level up to about 1500 m of the Central Apennine where is however particularly frequent in the hilly belt included between the 200 and the 700 m. The fossil findings suggest a distribution ampler than the present one, limited to the Peninsular Italy: as a matter of fact are known Miocene findings for Sardinia and Greece.

Salamandrina perspicillata is typically linked to the woody areas in good state of conservation; they are mesophilic or mesothermophilic habitats: mixed woods, Turkey oaks woods, beech woods, oak woods and Mediterranean scrub. Furthermore, it is found in grottoes as well as in secondary habitats: garrigues, grazing meadows, cultivations and areas subject to reforestation.

Inside the wood, the species is linked to waterways with permanent or semi-permanent hydroperiod, with the riverbed more or less strongly recessed; in open spaces, in grassland pools, in tracts protected from the current of slow flowing waterways with small waterfalls and more or less deep ravines along the riverbed, in the resurgences-watering troughs even with more pools as well as in the resurgence water collections (‘pools’); moreover, it has been observed in cracks of the rock of madicolous habitats. 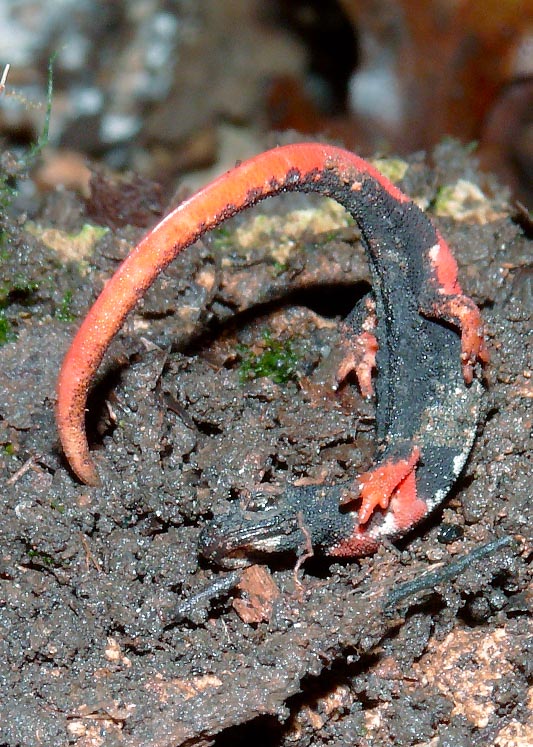 When then feels very threatened it may assume, as happens for the anurians of the genus Bombina, a posture called

The terrestrial daily activity is mostly nocturnal but even diurnal in the humid periods and in the females in ovideposition; the temperature of the water during the ovideposition is of 2,5-19 °C. The shelter sites for overcoming climatically adverse periods, stand in the soil and among the roots of the trees; in hypogean environment it can penetrate up to one metre of depth.

In the deciduous oak woods of planitial areas of the Roman Campagna dominated by Quercus cerris and whose herbaceous layer is amply invaded by Ruscus aculeatus, in the riverbed with substratum formed by compact calcarenite and with numerous species of ferns have been found a zoocenosis formed by larvae of Trichoptera and Odonata, Isopoda, Coleoptera Hydroadephaga, Potamon fluviatile, Rana italica (syntopic, in this as well as in several other stations, with Salamandrina) Bufo bufo, Lissotriton vulgaris, Natrix natrix, Rattus rattus, Apodemus sylvaticus vel Apodemus flavicollis; furthermore, the invasive Red swamp crayfish Procambarus clarkii; finally, in the thicket Sus scrofa.

A behaviour unanimously defined as “elusive” (term on which the Author of this text expresses his perplexity) has led to consider Salamandrina as a rare or in any case little common genus.

The intensification of the researches, also correlated to the realization, especially during the last twenty years, of several faunistic atlases (regional, provincial, local) has substantially increased the number of the known sites; the genus results therefore much less rare than what thought in the past, however its presence is usually limited to the proximity of the ovideposition sites.

The major threats stand in the modifications of anthropic nature of the aquatic sites suitable for the reproduction and of the areas close to them.

The coppicing represents a potential factor of threat for the areas near the water streams where the terrestrial activity takes place. The protection of the flooded areas, for what concerns the quality of the waters and the hydric functionality, is of fundamental relevance; particularly threatened result, for the localization and dimensions, the resurgences-watering troughs, common biotopes of the species in hilly and submontane environment.

The ichtyofauna input, salmonids in particular, in the water streams frequented by the salamanders should be absolutely avoided. 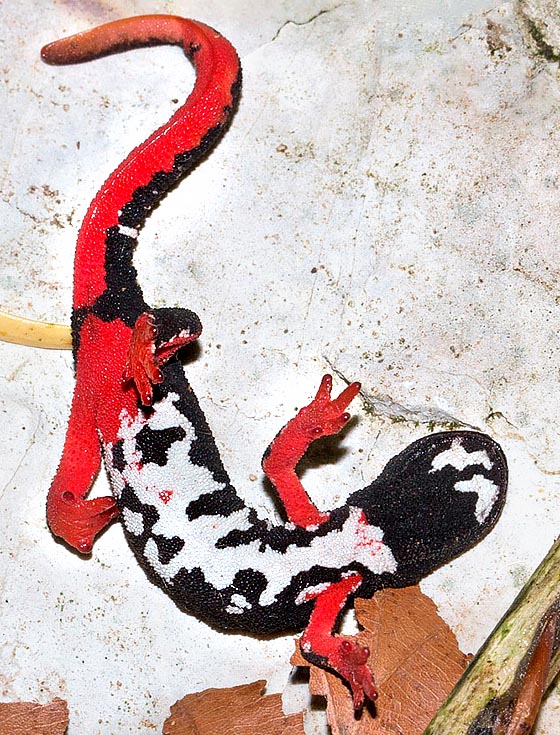 Like human fingerprints, the ventral patterns are typical to each individual, but the specimens living in the same geographical zone tend to share various colouration details © Giorgio Venturini

The genus is protected by international, community and regionals norms. It is included in the Appendix II of the “Berne Convention” and in the Annexes II and IV of the Habitats Directive 92/43/CEE. Moreover, after IUCN it is classified as LC, that is at “low concern”, being still abundant and diffused in all its range. Are known populations of habitat in good natural conditions that, on the basis of prolonged surveys, should amount to some thousands of adult individuals.

Adults. Overall look slender and puny, the ribs and the vertebrae are so much evident that the animal may give the impression of being dehydrated or underfed. Length included between 70 and 100 mm; maximum length of 134 mm in the females and 92 mm in the males; maximum weight little over 3 g in the females with eggs.

The sexes are much similar; in the males the cloacal is slightly more marked, the tail is averagely longer, the head in proportion bigger, the limbs longer and the trunk shorter.

Dark-brownish back. On the head, between the eyes, stands a whitish, yellowish or pinkish spot, V-shaped or triangle shaped that, for its conformation reminds a pair of glasses, hence the Latin neologism of the species perspicillata (perspicillum = eyewear) as well as the Italian vernacular name.

Ventral parts bright red, white or ivory and black spotted, to an extent variable from individual to individual. The final colouration is mainly reached by the first year of life; at this stage, the ventral chromatic pattern remains essentially constant all the life long. 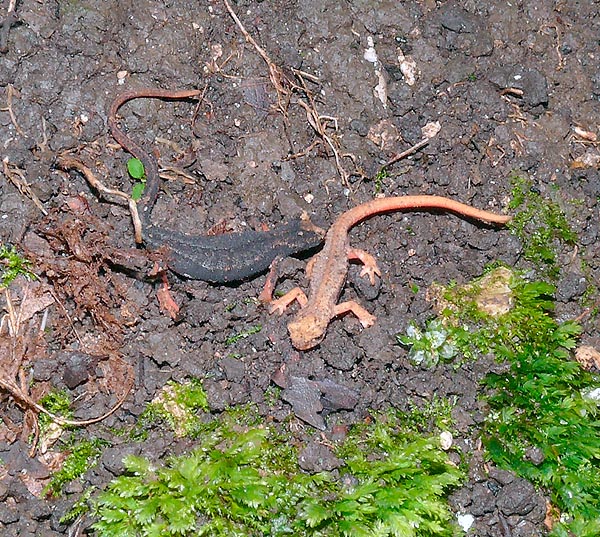 The back is blackish, but like all amphibians, we have albinism cases, or almost © Luca Tringali

Are also known individuals with the upper parts of the body wholly red as well as albino and semi-albino subjects. The organs of the lateral line, always vestigial in the males after the metamorphosis, in the females do reactivate during the ovideposition in aquatic habitat; it is nevertheless a character detectable only wih LM and after propre colouration.

Hand and feet are equipped with four fingers, hence the specific epithet of tergiditata, unlike the other Italian caudates whose foot is pentadactyl.

Eggs and larval stages. The eggs have a diametre of about 5 mm including also the gelatinous capsule whose properties facilitate the adherence to the substratum, commonly formed by stones, twigs and leaves completely submerged. The larvae, also tetradactyl, character useful for the discrimination purposes from those of other Italian salamandrids, 7-13 mm long at the hatching and 20-35 mm at the metamorphosis, provided of moderately developped gills, have normally the dorsal parts of yellowish-pinkish to brown colour and the ventral ones whitish or white-yellowish. On the trunk of the larvae is present a vertebral crest that, with the progress of the development, reduces to disappear completely. 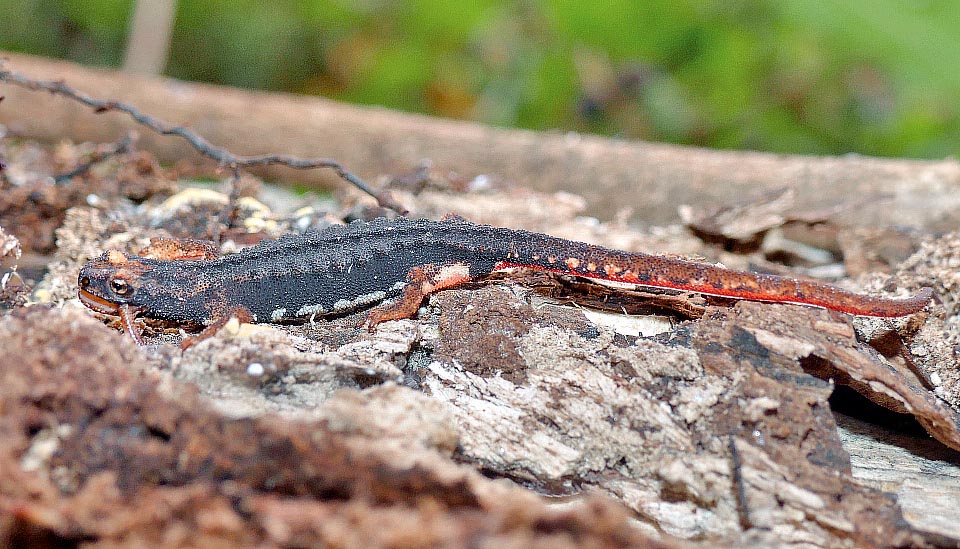 The Salamandrina perspicillata hunts by night but also in the twilight hours and by day in the humid and cloudy periods. Adults mainly eat arachnids, annelids, springtails and other small insects that they catch with their special sticky tongue, whilst the larvae seize aquatic invertebrates with sudden shots of the head © Luca Tringali

In the case of relatively long manipulation by the man or by other animals or in case of fall during the movements, Salamandrina may assume a posture called “Unkenreflex” (likewise the anurans of the genus Bombina) that consists in bending the trunk and the tail that, in case of maximum intensity, leads the animal to get the form of a complete arc; the tail gets to touch the head, the limbs are raised, only the abdomen keeps in contact with the substratum. 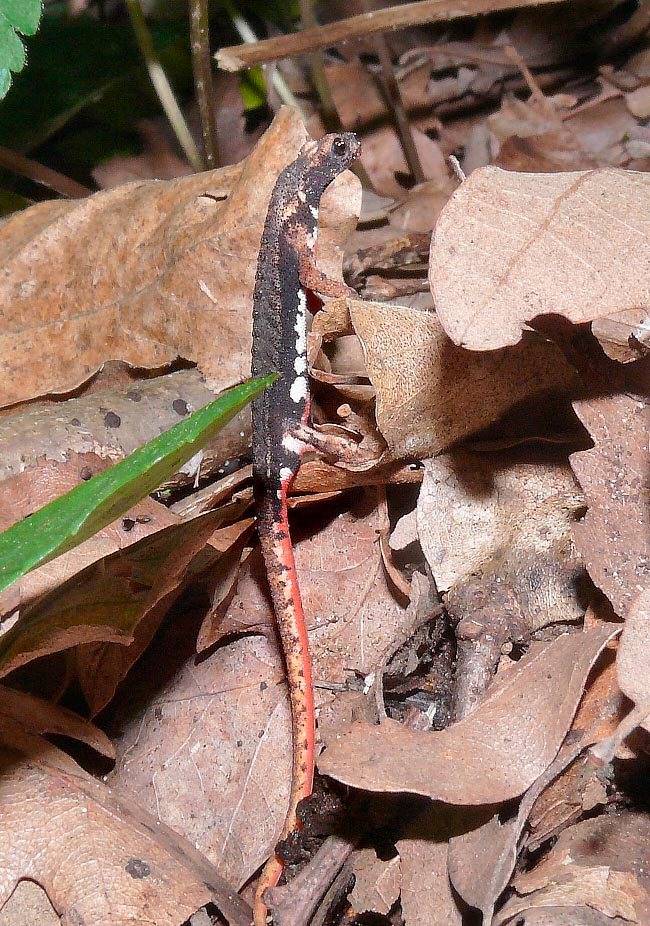 Shy and careful, often goes unobserved among the underwood leaves, like a twig fallen on the ground, lean as it is, with evident ribs and vertebrae that give the impression of a dehydrated and underfed creature © Luca Tringali

At times, a thanatosis status persists for a few seconds. Finally, they have observed less frequent behaviours among which individuals with semi-erect posture, that is raised on the rear limbs.

The genus Salamandrina has markedly terrestrial habits, in the metamorphosized ones the females reach the water for the ovideposition time, activity that takes place by day as well as by night and whose duration varies from 7 to 9 days (the “aquatic phase” may be however prolonged up to more that 40 days by carrying out more times the return to the site of ovideposition); the individuals observed in water are, with rare exceptions, females.

The ovideposition occurs between late December and early July but especially between March and May; however, in some locations of the Lepini Mountains (Lazio), the ovideposition takes place from late September up to the following spring.

20-60 eggs are laid on the lower face of stones, hollows in the rock, floating roots, stems, twigs, leaves in streams, creeks, ditches, resurgences-troughs, at times in the initial part of calcareous grottoes; the masses of close eggs, produced by more females, may merge forming coalescent aggregates of some hundreds of units.

The hatching (2-5 weeks) and the metamorphosis (after 2-5 months) are in function of the water temperature and, for the larvae, of the quantity of available food. Maximum longevity: 14-15 years for the females.

In the females the sexual maturity is reached when 4-5 years old; the annual growth of the length face-cloaca stands between 0 and 4 mm, that is 0-10%. The males have the gonads completely empty already by the end of summer, the spermatozoa accumulate in the Wolffian ducts until the next spring. 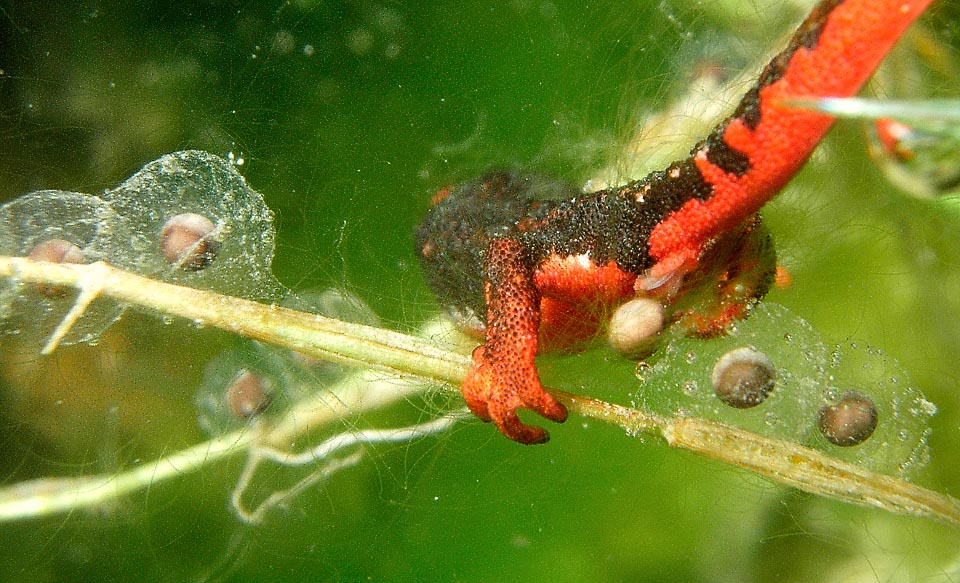 The Salamandrina perspicillata ovideposition occurs between late December and early July, but especially March to May. In some sites of the Lepini Mountains (a locality of the Lazio region in Italy) it can last from late September to the following spring. Normally are laid 20-60 eggs on the lower face of the submerged stones, holes in the rock, floating roots, stems, twigs, leaves in streams, creeks, ditches, resurgences-troughs, sources, at times in the initial part of calcareous grottoes © Luca Tringali 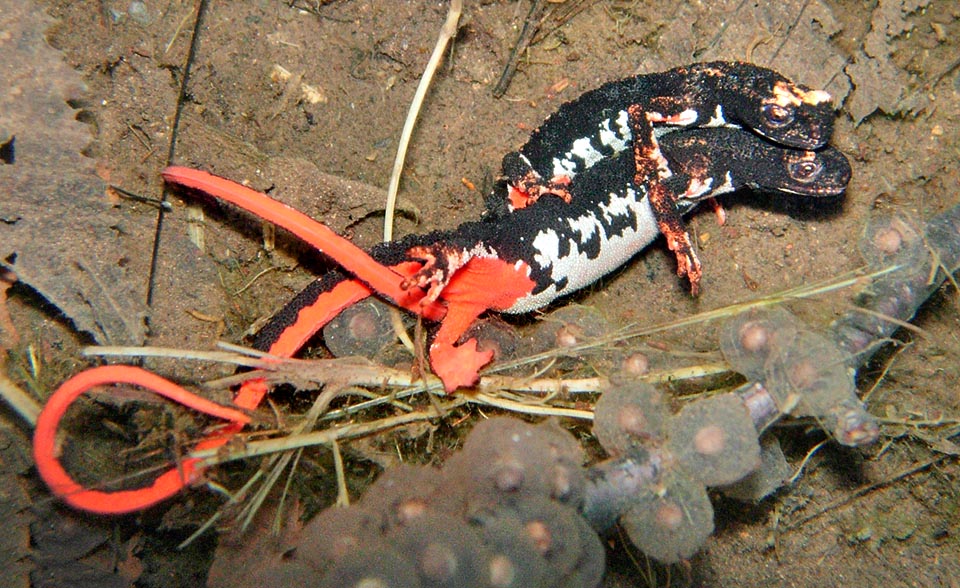 Two almost embraced females, at the ovideposition end. The masses of close eggs, produced by more females, may merge forming coalescent aggregations of some hundreds of units. The hatching (2-5 weeks) and the metamorphosis (2-5 months) are strictly linked, as usually happens, to the water temperature © Luca Tringali