The Ailanthus’s Sphinx or Ailanthus Silkmoth (Samia cynthia Drury, 1773), is a night-flying or crepuscular lepidopteran, and therefore is afferent to one of the families forming the Heterocerans (Heterocera). More precisely, the Samia cynthia, is afferent to the phylum or group of the Arthropods (Arthropoda), class of the Insects (Insecta), order Lepidopterans (Lepidoptera), family Saturniids (Saturniidae) and genus Samia.

With respect to the silkworm par excellence, or Mulberry silkworm Bombyx mori, the caterpillar of this species of moth is bred in sericulture for producing a less elegant but more resistant silk thread, called “seta eri” and utilized nowadays in the textile industry, in the past only at the level of single populations, for producing a tissue called “kien cen”.

Oloartic species; it is native to Asia, where is present in China, Japan and eastern Russia, later on, for the utilization in the sericulture, it was introduced since the XIX century n North America and in Europe, particularly in France, Italy, Austria, Switzerland and Hungary. 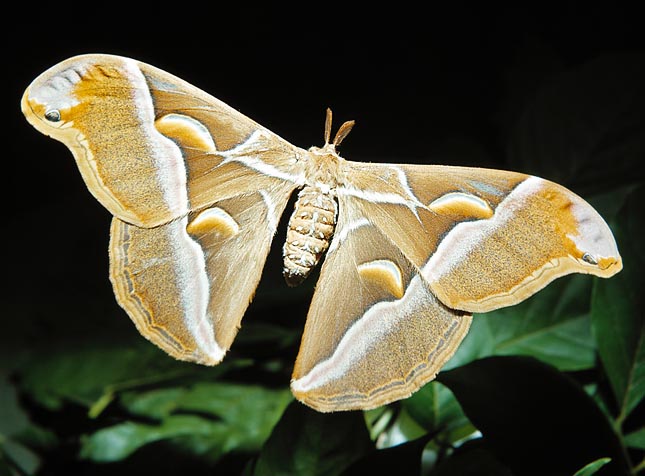 It mainly frequents agricultural lands and flowered plains. When in captivity, the caterpillar may grow up and fed on and with leaves of plants afferent to the genus (Ligustrum) and Lilac (Syringa), whilst in the wild it develops on plants of the genus (Ailanthus), whence the common name.

The background colour of this big moth varies from the brown khaki, to the olive green, up to the orange brown. The wide pale band crossing the wings is typical, as well as the semilunar translucid dots located at the centre of both pairs of wings, typical of the species. Then, a vertical black band crosses both pairs of wings. The males have fore wings more elongated than the females’ and antennae much more pennate, the thorax is hairy. The wingspan varies from 9 to 14 cm.

The spiny caterpillar appears white, because it is covered by a thin waxy dust, but, basically, it is bluish. These caterpillars, being not so aggressive in the nutrition, are not so much dangerous from the agricultural point of view.

This species has a cycle presenting one or, at the most, two generations per year, the hibernation happens at the stage of chrysalis. The adults of both sexes start to be seen by late spring (May-June), after the mating the female lays some hundreds of eggs distributed in groups of ten, on the pages of the leaf of the host plant.

The chrysalis pupates in brown silk cocoon, placed on a leaf and anchored to a branch by means of a robust silk thread which may be even 20 cm long.

The International Union for Conservation Nature (IUCN) establishes its status, nowadays, as “Lc”, that is, minimal risk.