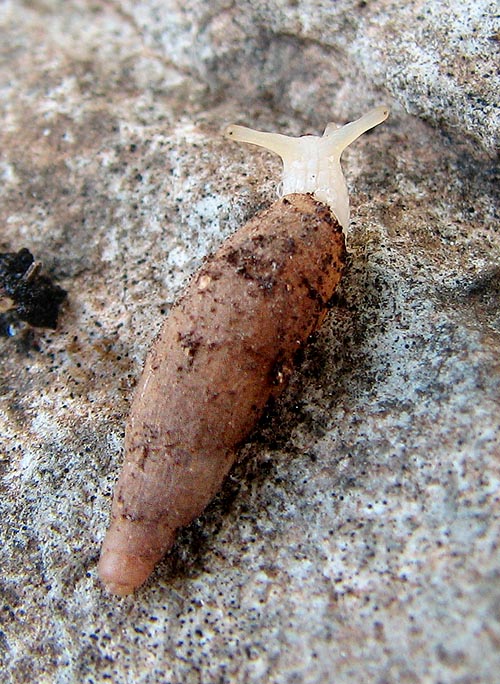 In 2007, in a small area of eastern Sardinia, amongst the sediments collected inside a source, they have found a conch shell with so much particular characteristics to lead to suspect its belonging to a land snail still unknown to the science. Focused researches, done during the following year, have led to the finding of other shells, besides the first living specimen of this entity, which have confirmed the initial perception: but the new gastropod has proven to be different from all what known till our days thus rendering necessary, apart the description of a new species, also the creation of a new genus. This has been named Sardopoiretia (that is Poiretia of Sardinia), due to its resembling to the molluscs of the genus Poiretia, the only one of the family Oleacinidae already known in Europe; the species has been, on the contrary, honoured to the son of one of the authors (Emanuele Bodon, Genoa).

Sardopoiretia emanueli Bodon, Nardi, Braccia & Cianfanelli, 2010, endemic Italian entity, is known up to now only in a fairly small area not far from the central-eastern coast of Sardinia (municipality of Baunei, Ogliasta).

The genus Poiretia, by far the most close genus to it, is on the contrary distributed over the European-Mediterranean area: Poiretia algira (Bruguière, 1792) in Algeria; Poiretia compressa (Mousson, 1859), in Albania and in Greece; Poiretia delesserti (Bourguignat, 1852), in Albania and in Greece too; Poiretia mingrelica (Boettger, 1881) only in the Caucasus; Poiretia cornea (Brumati, 1838) from Italy (Euganean Hills, eastern sector of Friuli-Venezia Giulia, Gargano) up to the western Balkans (Slovenia, Croatia, Bosnia and Herzegovina, Serbia, Montenegro and Albania); Poiretia dilatata (Philippi, 1836) which includes, besides the typical subspecies P. d. dilatata, present in peninsular Italy (Marches, Umbria, southern Italy) and in Sicily, also P. d. marginata (Westerlund, 1886), of Crete and P. d. peloponnesica Subai, 1980 of Peloponnesus.

The living specimen and most of the shells of Sardopoiretia emanueli have been collected in depth (50-80cm) in the calcareous soil, among the roots of a carob tree (Ceratonia siliqua) or in the deep layer of the stony soil covered by Mediterranean maquis. Other shells were collected in alluvial debris in a spring with schistose lithology. They have never found any one in the surface or in the litter. From this and from the anatomical peculiarities characterizng the living specimen (depigmentation and micro-ophtalmia), it appears that this entity is endogenic, perfectly adapted to the life in the subsurface layers of the soil.

The shell of Sardopoiretia emanueli (height 15,2-21,1 mm; diameter 4,2-5,6 mm) has dextral coiling, is of medium size, slender and fusiform, with high spire and obtuse apex. It is composed by 5-5½ turns of fast growing spire, the last one being very ample, so to form the 2/3-3/4 of the height of the whole shell. The sutures of the shell are marked but little deep, scalloped. The opening is elongated, oblong-pyriform, prosocline, acute above, approximately 2/5 of the total height of the shell. The peristome appears in contact with the last turn, interrupted, neither thickened nor reflected, with slightly winding outer edge; its upper and lower vertices are united by a slight callosity. The columella is slightly concave, truncated obliquely at the base. The umbilicus is absent. The outer surface of the protoconch is smooth; the one of the first spire is crossed by weak radial rugosities, with erratic trending, intersecting. The following turns are ornamented by radial little prominent ribs, slightly sinuous, more marked in the upper part and thicker, thinner and more attenuated in the basal portion. In the last turn, the number of the ribs varies from 7 to 9 per mm in the upper portion and from 18 to 28 per mm in the lower one, due to the appearance of secondary ribs, intercalated to the main ones. The colour of the shell is whitish, pale and a little transparent if the shell is fresh. Some characters of the shell of Sardopoiretia (fusiform look, marked axial sculpture, columella truncated at the base) allow drawing it to the genus Poiretia. However, S. emanueli distinguishes from the species of this genus, for the smaller size, the slimmer shape and for the particular micro-sculpture of the first turn of the teleoconch. 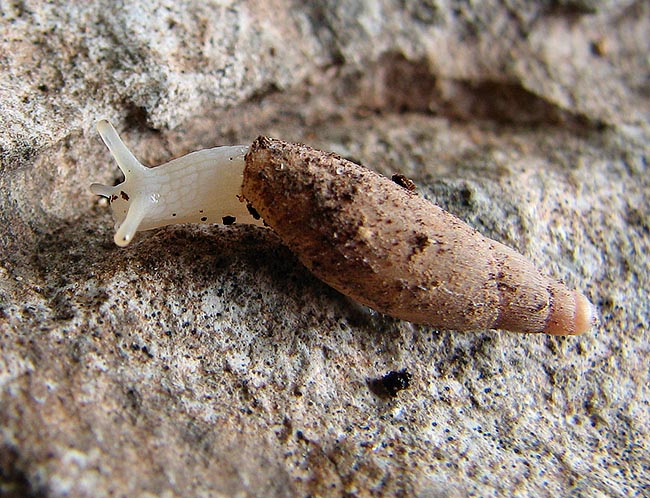 The mollusc is, on the contrary, totally depigmented, of milky white colour, excepting the rear part of the foot which shows a pale ochreous epithelium, seemingly of glandular nature. Also the ocular tentacles are completely depigmented even if provided with small blackish ocular spots. The sole has no median groove. Ample but thin triangular laminar formation present on the lower edge of the mantle. As is the case of almost all land molluscs, we find in the genital apparatus (in this instance, hermaphrodite) very important diagnostic characters: the penis of Sardopoiretia emanueli presents in fact as elongated, narrower in the central portion, without any trace of diverticulum and provided inside, in addition to rare longitudinal folds, also of more or less vast areas covered by lanceolate papillae with cuticularized apex. Its more similar genus, that is the Poiretia, is on the contrary anatomically characterized by a squat penis, adorned internally by longitudinal folds and provided of an evident lateral diverticulum (reduced and hardly recognizable at times). Also the radula (a sort of “ribbon”, covered by many rows of very hard denticles, utilized by the gastropods for ripping and shredding the vegetables, or the animal tissues in case of carnivorous species) is absolutely typical: javelin-shaped, formed by about 50 rows of teeth, each one having no central tooth and composed by 14-16 teeth per side, unicuspid, falciform, long and robust, equipped, at about half of their length, with a roundish apophysis, connected to the basal membrane. Conserving the shape more or less unchanged, the teeth get gradually slightly bigger, while getting away from the centre up to the fifth, and then sensibly reducing towards the edge of the radular ribbon. In the genus Poiretia, on the contrary, the central tooth of the radula is always present.

Sardopoiretia emanueli has been collected in the soil along with other empty shells, some belonging to equally hypogeous species (Hypnophila girottii Esu, 1978 and Hypnophila bisacchii Giusti, 1970), others belonging to surface species (Cochlostoma sardoum Westerlund, 1890): all of them did show clear signs of predation on the first turns of spire or on the median ones, consisting in irregular holes consequence of a strong erosive activity. As that the marks of predation are much similar to those produced by Poiretia on the land molluscs of the genera Pomatias and Cochlostoma, and that such perforations have never been found on shells of the three species collected in other areas of Sardinia, it appears logical to conclude that they are, most likely, a consequence of attacks done by Sardopoiretia emanueli.

The discovery of Sardopoiretia emanueli has done nothing but enriching the list of the species of land molluscs endemic to Sardinia and confirming the island as one of the zones with the most naturalistic value of the whole continent, especially in the central-eastern calcareous area.