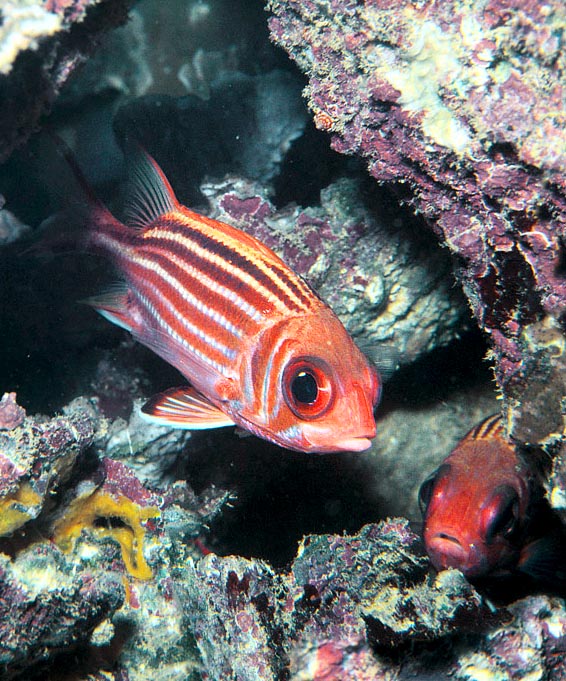 The Redcoat (Sargocentron rubrum Forsskål, 1775), belongs to the class of Actinopterygii, the ray-finned fishes, to the order of Beryciformes and to the family of Holocentridae which counts almost one hundred of species.

The etymology of the genus comes from “sargus”, the name the Romans gave to the seabreams, and from the Greek “kentron” = sting, due to the showy spine it has on the operculum.

The name of the species “rubrum” = red in Latin, refers to its flaming lvery.

It is at home in the tropical waters of the Indian and the Western Pacific oceans.

We find it, indicatively, from East Africa to the Red Sea and the Arabic Sea, in India, Sri Lanka, Thailand, Malaysia, Indonesia, Australia, New Guinea, Philippines, Taiwan and the southern part of Japan. It is absent at the Maldives, the Seychelles and, generally, in the islands far from the continent. Eastward, it reaches Tonga and, in the southern part of the Pacific, the Vanuatu Islands, New Caledonia and New South Wales.

Recently, due to the Suez Canal, it has entered the south-eastern Mediterranean colonizing the coasts of Libya and of southern Turkey. It has occupied the ecological niches left free by the Mediterranean species which had, for centuries, ignored the zone because little inclined to the high temperatures and the low salinity connected with the strong flow rate of the Nile, which has reduced only with the Aswan Dam.

In this context, they talk of “Lessepsian migration”, referring to Ferdinand de Lesseps, developer of the Canal. This phenomenon, which interests an increasing number of species, is today favoured by the dissolution of the “Bitter Lakes”, two zones with very high salinity crossed by the canal, and by the general increase of the temperatures due to the greenhouse effect. It is therefore not excluded that the redcoat, more a fighter than many homegrown species, might very soon reach Greece and southern Italy. 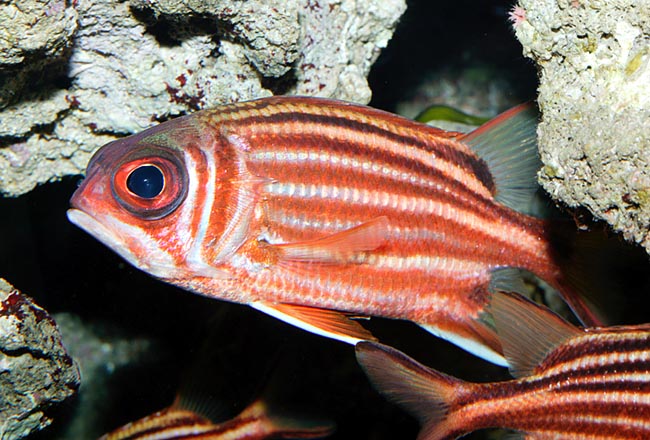 It is present up to 80 m of depth. It loves the grottoes and the caches among the rocks, the lagoons and the calm waters of the harbours, but is comfortable, without any problem, also among the most impetuous currents.

The redcoat usually measures 27 cm, but it can easily exceed the 30 cm.

The livery is splendid indeed. On the flame red background colour, darker on the back, stand out, in fact, on the sides some clear longitudinal bands, with silvery or golden reflections, per- pendicular to analogous vertical stripes on the head which has, furthermore, an oblique trait under the eye. Also the fore edge of the ventral fins and of the anal is white, like the tips, well evidenced to intimidate, and the spiny rays of the dorsal, whilst the outer edge of the caudal is red. The opercular spines are poisoned. The sting, quite painful, is usually not fatal for the man, but deters the predators which associate the same to the flaming look. This happens, of course, where the light is present, because in deep and dark grottoes the red becomes black and the drawing mimetic. 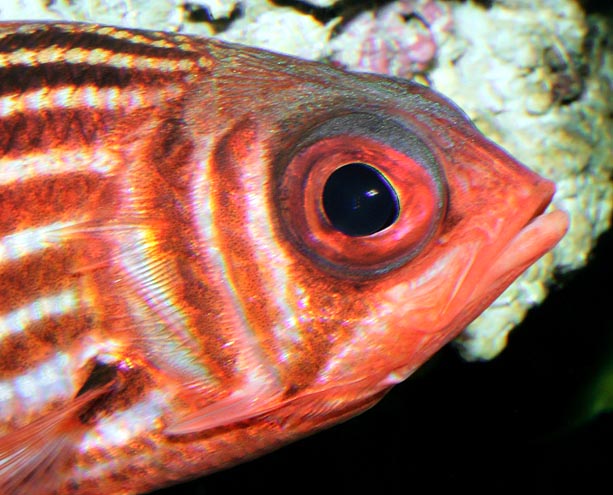 The redcoat lives solitary or in small schools mainly nourishing of shrimps and crabs it predates on the bottom, but also of small fishes. Eggs and larvae are pelagic, and the juvenile stages show long spines on the head.

Present only in the great public aquaria, it does not interest the aquaria market and even less the fish market, due to the relatively modest size and the flesh rich of spines and surely not prized.

When the populations are decimated by the events they may double their number in less than 15 months and consequently, with all these premises, the vulnerability index of the species is decidedly low: only 24 on a scale of 100.