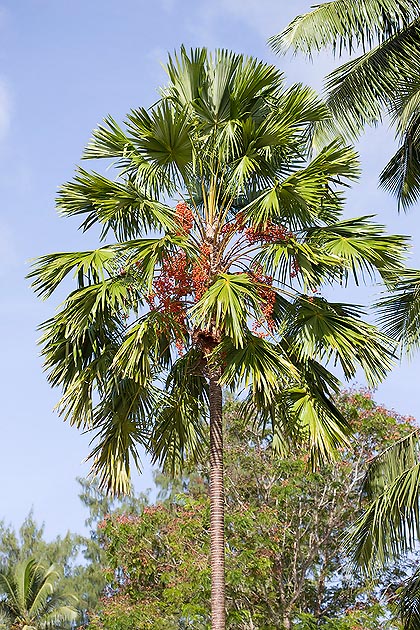 Very ornamental, but cultivable in Tropics and Subtropics only © G. Mazza

The Saribus rotundifolius (Lam.) Mart. (1838) is native to a vast area of the Asiatic south-east, comprising Malaysia, Java, Moluccas, Philippines, Sulawesi, and Lesser Sunda Islands, where it grows in the pluvial forests at low and medium altitudes.

The name of the genus is the local one used by the Makassans of the Indonesian island of Sulawesi (Celebes), utilized by Rumphius (ca. 1627-1702) in his ‘Herbarium Amboinense’ published in 1741; the name of the species is the combination of the Latin words “rotundus” = rounded and “folium” = leaf, with obvious signification.

It shows a solitary trunk of 20-25 cm of diameter, tall up to about 20 m, of brown colour and covered by a fibrous mass in the part closer to the crown, greyish and with the rings of the scars of the foliar petioles in evidence in the older one. The leaves are palmate, almost rounded, of glossy pale green colour and little divided in the young plants, costapalmate in the adult ones, about 1,5 m wide and incised for about half of their length in usually rigid segments. Petiole long up to 2 m, with thorny margins at the base in the young plants, almost unarmed in the adult specimen.

The inflorescences are about 2 m long, ramified, with small, yellow, bisexual flowers. The fruits are globose, of red colour turning to the blackish when ripe, of about 2 cm of diameter. It reproduces by seed which germinate in about two months. Very ornamental plant, especially when young, for its luxuriant crown, cultivable only in tropical and subtropical climates, as it does not stand temperatures close to the zero, but for a very short period. Locally, they utilize the leaves as covers and for wrapping foods. Young plants are often utilized in pot for inner spaces decoration.