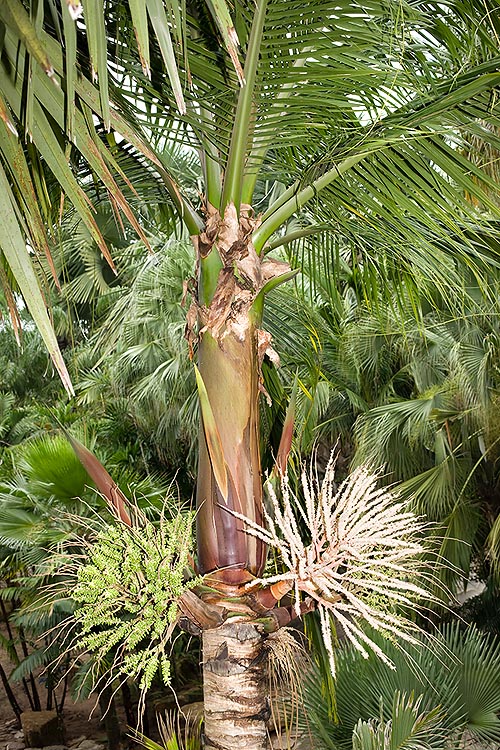 This plant is native to the Nansei-shoto Archipelago (Liukiu or Ryukyu Islands), in particular islands of Ishigaki and Iriomote, where it grows in the humid forests on hilly slopes.

The name of the genus is the combination of the Japanese industrialist, fond of botany, in particular of the palms, Toshihiko Satake (1910-1998) and Kentia; the name of the species, “liukiuensis” = of Liukiu, refers to the origin place.

The Satakentia liukiuensis (Hatus.) H.E. Moore (1969), is a monoecious plant with single stem, 15-20 m tall and with a diameter of 20-30 cm, with the base usually enlarged and equipped of a mass of adventitious roots, smooth, of green or brown colour, tending to the grey when ageing, striated longitudinally and on which are visible the close rings trace of the fallen leaves.

The leaves are pinnate, elegantly arcuate and 2,5-3 m long on a short petiole; the pinnulae are linear-lanceolate, sharp, about 60 cm long in the central part, regularly inserted on the rachis on the same plane. The foliar base, of variable colour, olive green, brown red or brown purple, glossy, wraps entirely the stem for a length of 60-70 cm, forming a sort of elegant capital.

The inflorescences bear under the leaves, are ramified, with unisexual cream flowers and slightly perfumed, placed in the typical triad (one female flower between two male ones), except at the extremity of the branches where are present only male flowers. The fruits are ovoid or ellipsoid, about 1,4 cm long and 0,7 cm of diameter, initially yellow, then black when completely ripe, containing one seed only.

It reproduces by seed which must be fresh, having a rather short duration of germinability, which germinates in 2-4 months at the temperature of 24-26 °C; the growth is initially rather slow.

It’s a plant of great ornamental and landscape value, as isolated specimen, in group or in row, but for the moment still little diffused; cultivable in the tropical and humid subtropical climate zones, in full sun, but in the first stages of the growth when it is to be slightly shaded, on soils rich of organic substance, perfectly draining and kept constantly humid.

The adult plants may resist to rare, and very short lasting, decreases of temperature just under the 0 °C, but not the long periods of medium-low temperatures met during the winter months in the temperate zones.

The young plants are an excellent subject to till in pot for the decoration of winter gardens, galleries and interiors, provided much luminous, on substrata rich in humus with addition of coarse sand, agriperlite or other inert substance for a 30%, in order to improve the drainage, with temperatures which are never to go down under the + 16 °C.