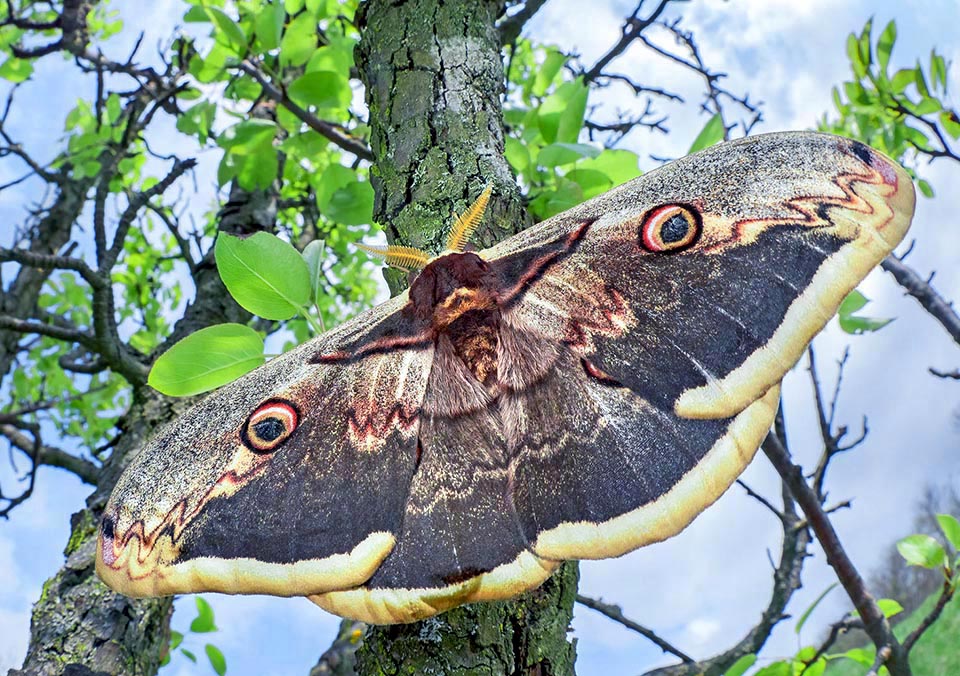 The Saturnia of the pear tree, Saturnia pyri (Denis & Schiffermuller, 1775), known also as Pavonia of the pear, Greater pavonia, Great peacock moth, Giant emperor moth, Viennese emperor, Emperor of the night butterfly, is one of the more than 2.000 species belonging to the family Saturniidae. Some of these, with a wingspan of about 25 cm, stand among the biggest extant lepidopterans.

Usually, these species live in tropical zones. The body of the adults is covered by scales like hairs. The mouthpart is reduced or is not functional. 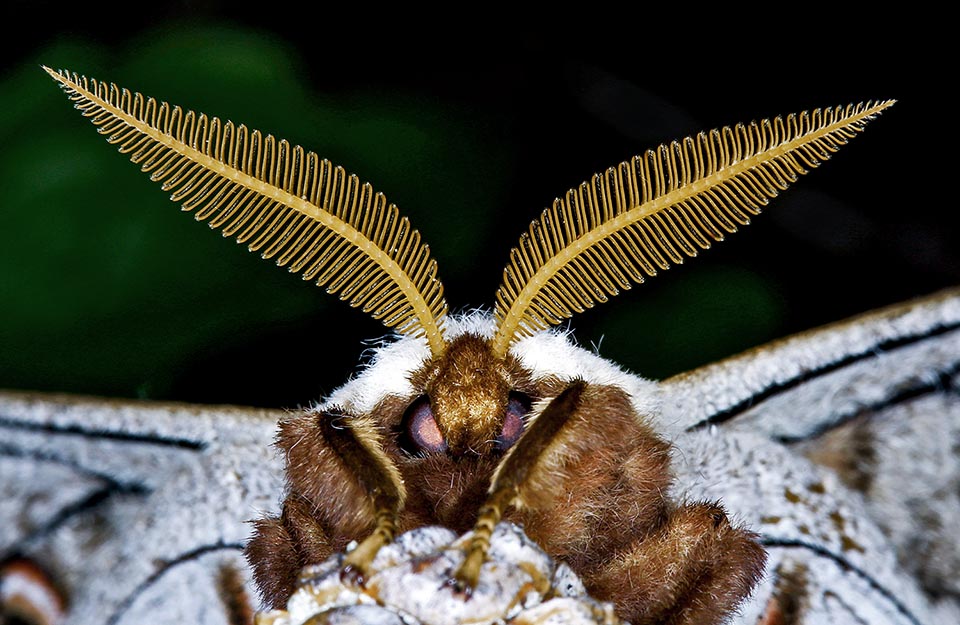 With its bipectinate antennae, extremely sensitive, it can locate the presence of a female looking for a partner even if 12 km far away © Branka Forsceki

The wings often present big ocellar spots and the hind ones are caudate in the genera Actias and Argema. The antennae of the males are bipectinate and those of the females are ocellar spots.

The larvae reach remarkable dimensions. They have a cylindrical shape with liveries with showy colours and present a series of large tubercles with hairs and robust bristles. When disturbed, some species produce with their mandibles cracking sounds, like “clic”, genuine and real warning signals of aposematic type. 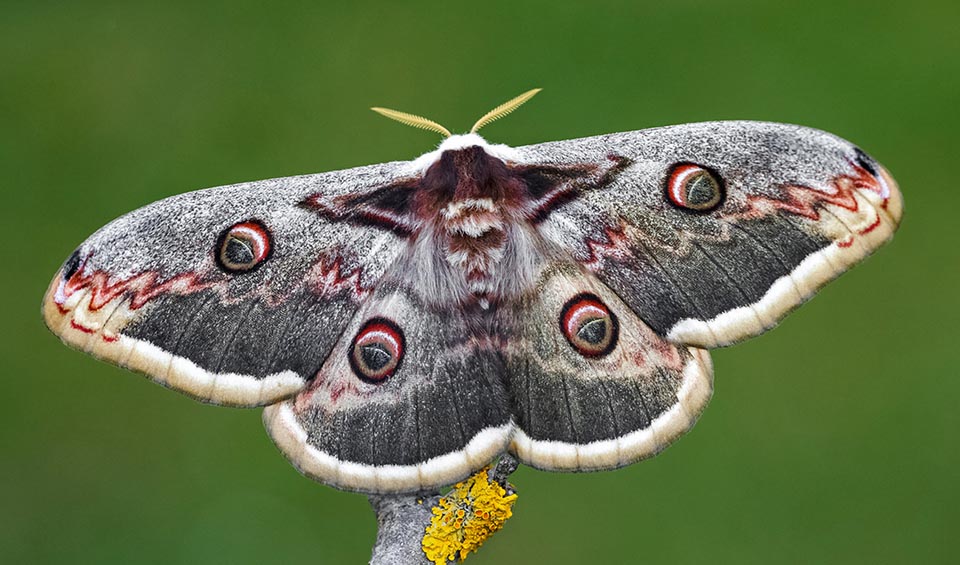 The females of Saturnia pyri, a little bigger than the males, have bidented antennae and reach 17 cm of wingspan. They are not good fliers but move to reach higher positions from where they can better diffuse, during the night, a “bouquet” of substances very attractive for the males, known as sexual pheromones © Adam Gor

The eopupe build up silky cocoons to metamorphose in chrysalises and adults. In some Asian countries from the cocoons of Antheraea pernyi and of Samia cynthia they get a coarse silk, of poor commercial value, from which is obtained the fabric “tussah” and the tissues “shantung”.

In Europe after the Pébrine epidemic that, during the second half of the Nineteenth century, has affected the Silkworm (Bombyx mori) and has put in crisis this industry, have been introduced some serigenic species of Saturniidae with disappointing results and consequent abandonment of breedings. 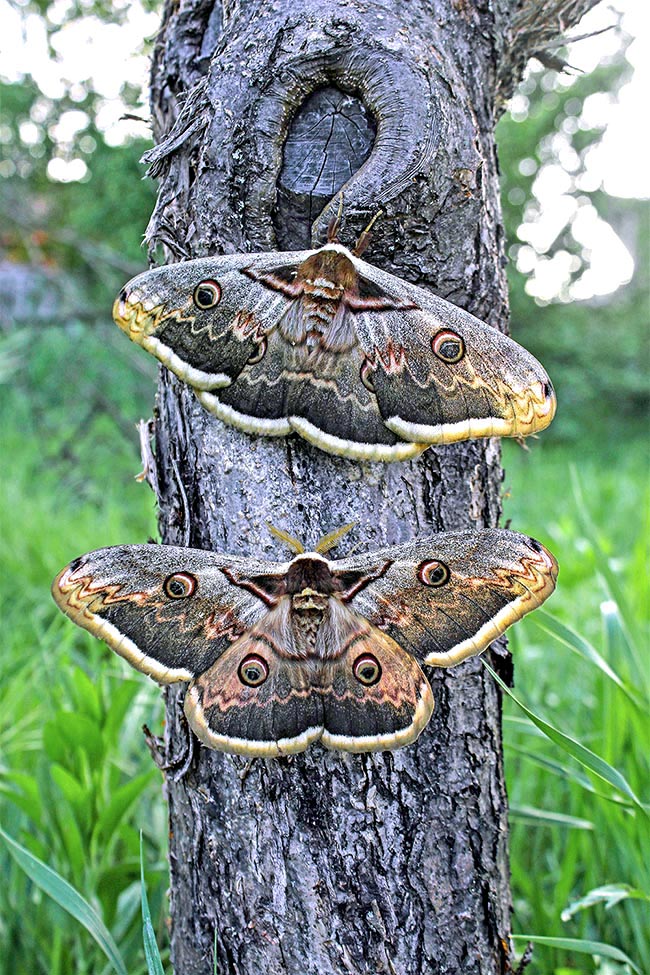 Once reached the female, the male emits aphrodisiac substances. If she responds positively the mating takes place © Marcell Kárpáti

Amongst these the Asian Samia cynthia, with its greenish wings, living on species belonging to the genera Ailanthus, Ricinus, Ligustrum, Prunus, Sambucus, etc.

Naturalized in America and in Europe, in 1954 was found in Emilia.

Also another introduced species living on the oaks, Antheraea yamamai, has been recently found in Friuli – Venezia Giulia.

The name of the genus Saturnia, instituted in 1802 by Schrank, refers to the Roman god Saturn, depicted as a bearded old man, covered by a cloak with a scythe in his hand and corresponding to the Greek god Chronos.

Conversely, the specific term pyri, of the pear in Latin evokes the plant preferred by this species.

It is diffused in Europe, North Africa, North America and western Asia, through Anatolia and the Caucasus.

It lives in environments having a warm temperate climate, in small woods and in wooded steppes with abundant shrubby vegetation.

It is frequent in the orchards and in anthropized sites, but rarely the number of the larvae is such as to cause significant defoliation.

The Greater pavonia is the biggest European lepidopteran. The females, little bigger than the males, have a wingspan that may reach 17 cm.

As is the case for other Saturniidae, the mouthpart is not functional.

The colour of the body recalls the chocolate, with shades of grey colour on the wings.

The forewings present a small dark apical spot; in the centre of each wing is present a round spot with black, brown, grey, concentric circles that stand out on the greyish brown background colour of the wings, amply edged by a pale ocher band and some zigzagging lines. 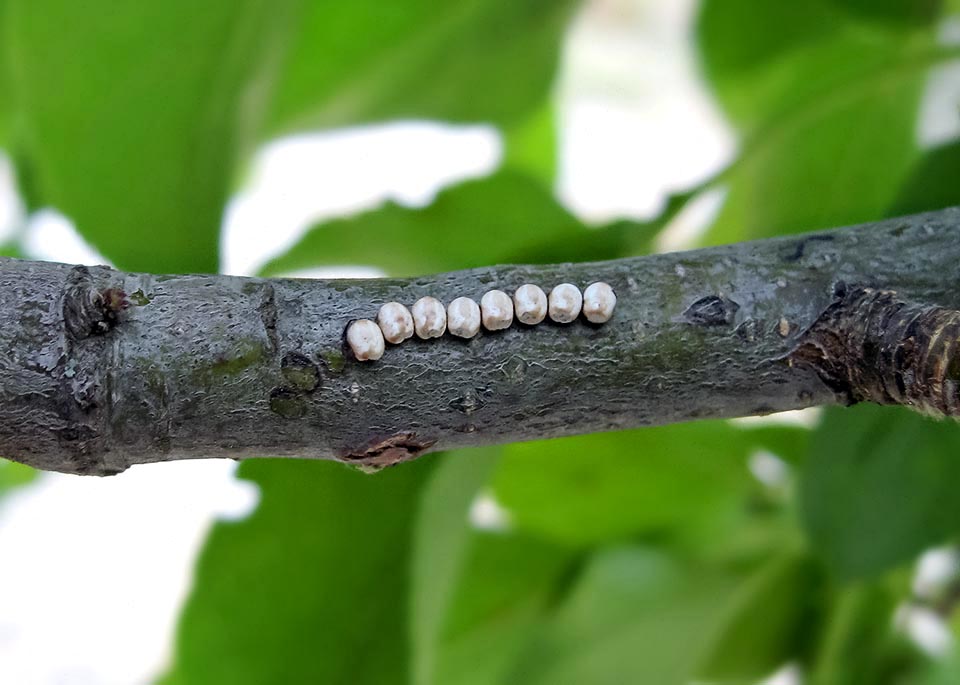 The fecundated female lays, in small groups, hundreds of greyish eggs having small brown spots. About 3 mm broad, they hatch after a few days © Costán Escuer

The characteristic ocellar spots, like eyes of nocturnal birds of prey, have the function of frightening possible predators (foberic mimicry).

As a matter of fact, when in the darkness of the night the Greater pavonia suddenly opens the forewings uncovering the hind ones, these dots are mistaken for wide eyes of a raptor and scare off, terrified, insectivorous birds and rodents. 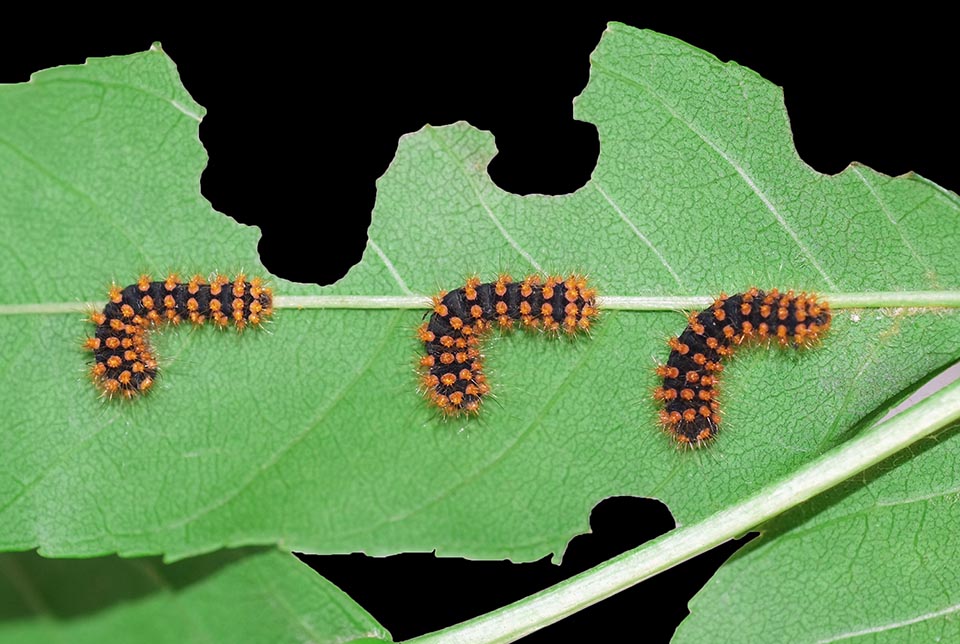 The newborn larvae are about 6 mm long and have a blackish body. Then, after the first moult, several red papillae spring up © Christophe Picq

An artistic adult male with wide open wings on Aurum has been depicted by Vincent Van Gogh in 1889.

The fecundated female lays small groups of greyish eggs with small brown spots of the diametre of about 3 mm.

The development of the larvae, of eruciform type, with the body, as we aforementioned, cylindrical, completes in about 4-5 months and 4-6 moults. 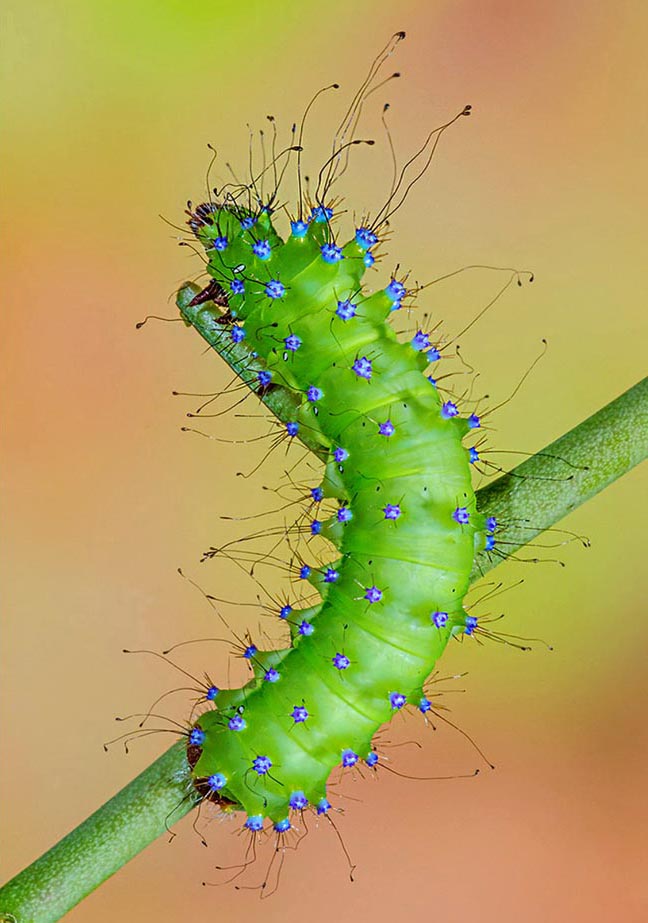 The newly born larvae are about 6 mm long and have a blackish body.

In the second aged ones are present several red papillae that stand out on the black body.

In the following stages the liveries are greenish yellow with light blue tubercles.

The mature larvae measure about 10 cm. They are yellowish green with lateral yellow bands and with six light blue tubercles, rich in bristles, on each segment of the thorax; in these last are evident the breathing stigmas.

The orange yellow eopupe move to sheltered sites where they secrete a coarse silk to build a robust cocoon of grey, yellow brown, colour, fusiform, rounded on a pole and pointed on the other. Inside it they transform in stocky chrysalises, of brownish colour, 3,5 to 5 cm long.

This stage, protected by the cocoon, may last even two years with flickering between May and June.

The adults of the Saturniid cannot eat and therefore live only for a few days.

Normally the males flicker shortly before the females.

These ones are not good fliers but move to reach high position where they may better diffuse, during the night, a “bouquet” of attractive substances for the males, known as sexual pheromones.

The most attractive part reaches them within a few kilometres, for some even 12 km, and induces them to move towards the emitting source.

Before attempting the pairing, also the males secrete then aphrodisiac substances, and only if the female responds positively, then they proceed to the mating.

Shortly after, once finished their task, they die. Exhausted and hungry, they are often easy prey for birds, rodents and reptilians.

After the mating, that may last even for about thirty hours, more long-lived than the males, glue to the branchlets of the host plants, small groups, a few hundred eggs that will hatch after some days. 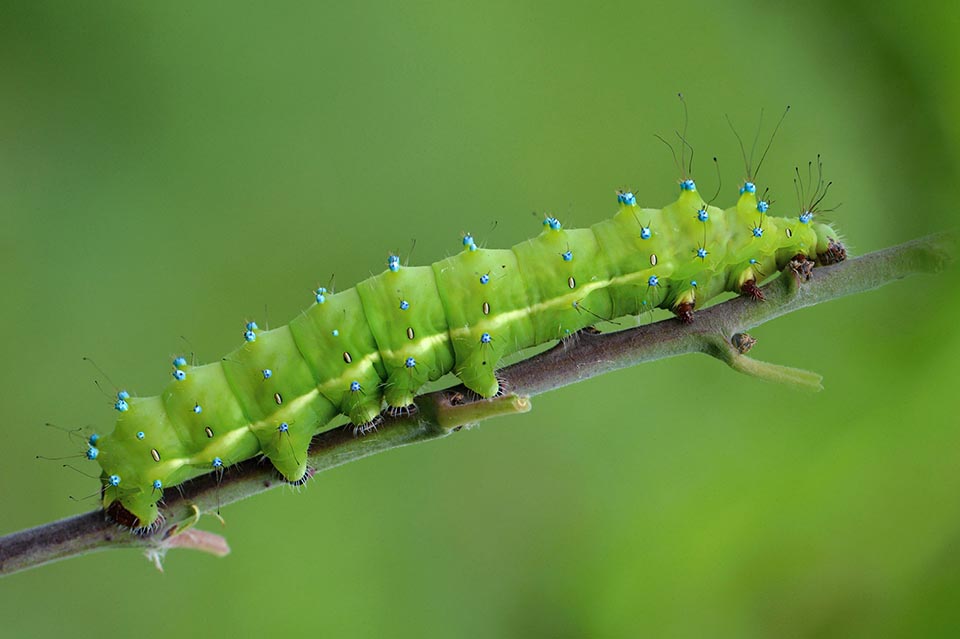 In 1875, the famous entomologist Fabre noted that a female of Saturnia pyri, just flickered, locked up in a small cage in a laboratory, had attracted 40 males during the night. The scientist guessed that it had produced a very attractive volatile substance that he called “quintessence”.

On the basis of this knowledge, in 1959, the Nobel Prize Butenandt extracted, from more than 300 thousand virgin females of Silkworm, a few milligrams of “bombykol” opening the way to individuation and synthesis of the sexual pheromones. 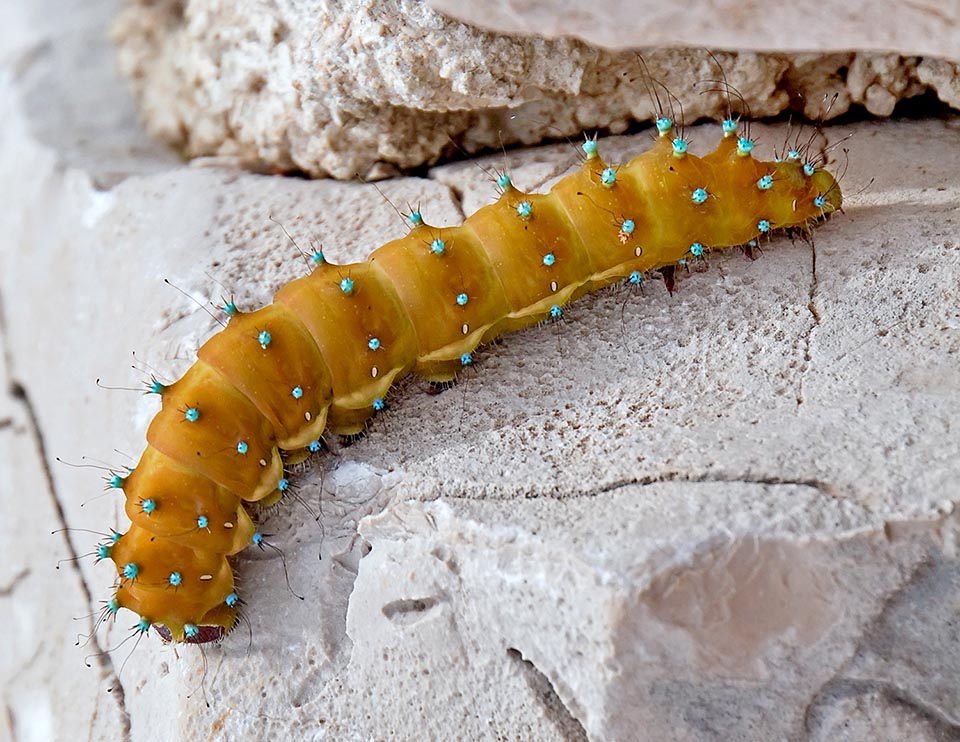 These substances that the chemical industry packs in dispensers, are nowadays put in special traps that have a wide employment in the integrated struggle programs in many agricultural and forest ecosystems for the monitoring and/or the mass capture of the males of harmful insects.

In relation to the duration of the larval stage and of the diapause of the chrysalises, the Greater pavonia may perform one generation in one or two years. This phenomenon, linked to the climate, allows it to overcome possible difficult periods and ensure the survival of the species. 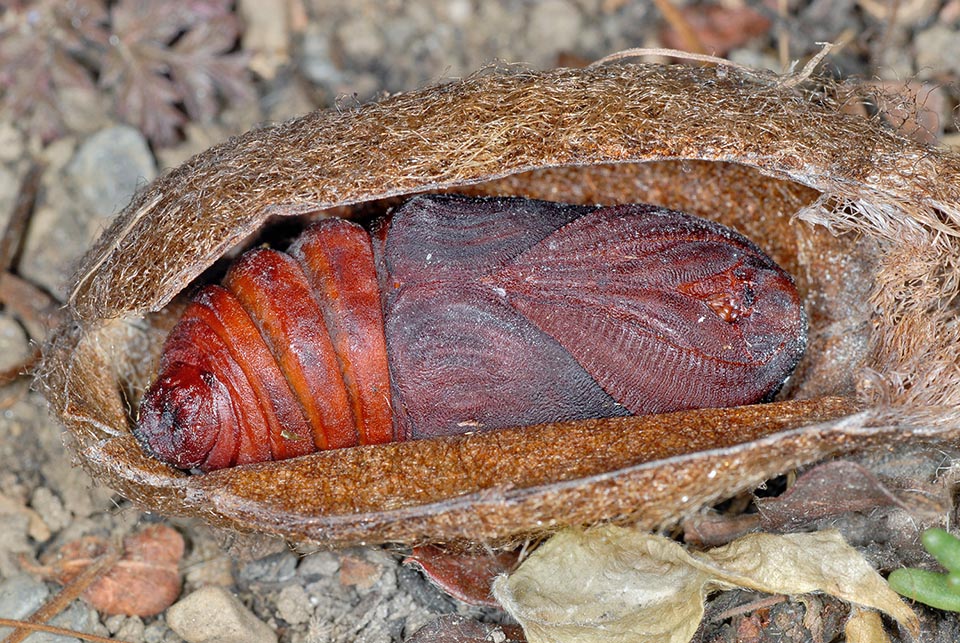 Cocoon opened on one side to show a male pupa. The chrysalises can wait in diapause, and depending on the climate Saturnia pyri has an annual or biennial generation © Wolfgang Wagner

Also for the joint action of various environmental factors, the Greater pavonia consequently is not a phytosanitary problem in the orchards and does not require specific interventions of demographic control.