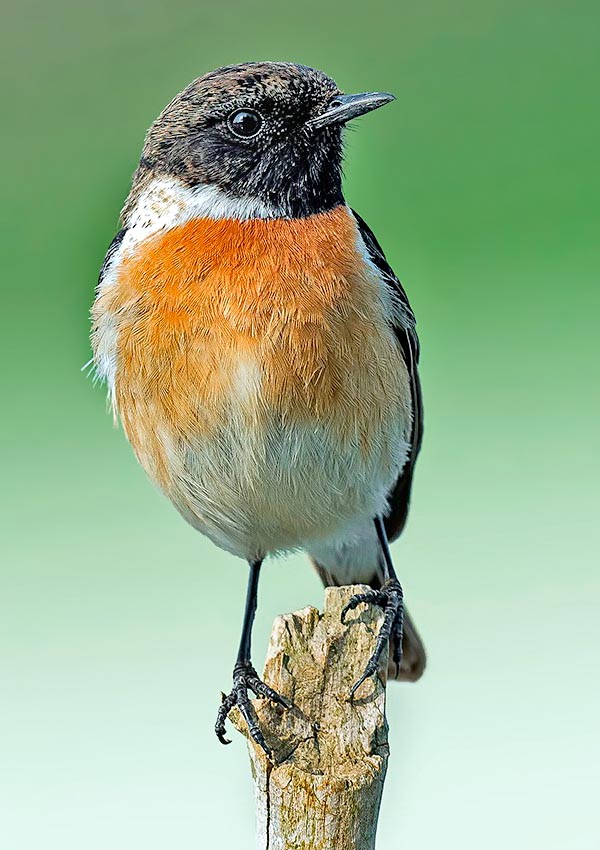 The Common stonechat (Saxicola torquatus) male has bright colours and a hard clicking sound like the beating of iron an anvil, hence being called in some Venitian dialects ‘little blacksmith” © Antino Cervigni

When at times it happens during the drive in open country, crossing expanses of meadows and of low cultivations, to see suddenly on the roadside, on top of a low shrub or a dry sprig, a very small and squat birdie wagging and restless, noisy and very colourful, a birdie that for the laymen might seem escaped from some cage or being an accidental visitor from some tropical world, so much painted and unusual.

Then, suddenly, here it is taking off with a one metre leap upwards and starting to hover motionless for some moments than beginning a swinging dance up and down like a big insect looking for the flower on which to stay. A very fast beating of wings with lateral displacements equally sudden and abrupt exploiting its Holy Spirit technique.

Surely it does not have the elegance of a Common kestrel (Falco tinnunculus) who is a master of this art but puts in it all the possible effort with excellent results.

These extremely frequent actions are its way to show itself to its similars and to indicate that this is its territory but the technique is used also as modality of hunt to the insects it eats.

Living in a little treed environment but dense of high weeds that hinder the vision of the one who would like to stay on the ground looking for food, it has made a virtue of necessity and exploits in the best way this capacity it has fluttering incessantly, hovering like a butterfly and from the top of a couple of metres, diving and catching skillfully an insect staying on the underlying grass or a harmless moth who has raised inadvertently. The Common stonechat (Saxicola torquatus Linnaeus, 1766) belongs to the order of the Passeriformes and nowadays to the family of the Muscicapidae seen that previously and for long time it was placed among the Turdidae. Classified initially as Saxicola torquata, now synonym, has modified the declination of the genus keeping it instead in some other species such as the Whinchat (Saxicola rubetra).

There is no doubt that the common stonechat is one of the most coloured birds of our countries. It is a solitary and very territorial bird even if in winter it can be occasionally seen together with a young or a female, not necessarily its future partner. The etymology of the scientific name gets origin for the genus Saxicola, from the composition of two Latin terms “saxus” = stone and “cola” from “colere” = to live, rightly due to the usual habitat frequented and for the species torquatus, in Latin “with the collar” for what displayed by its livery. The reason of the common name “saltimpalo” given by the Italians is not difficult to imagine, as it means jumping on a pole. 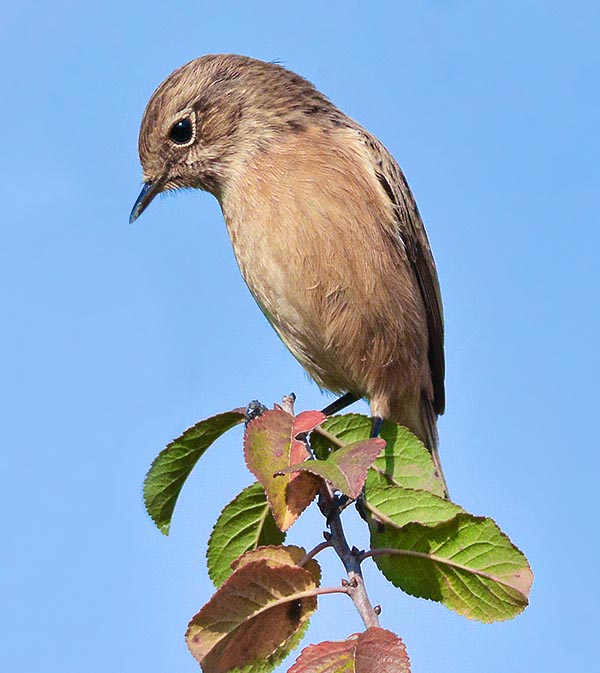 The female shows more modest orange shades, without the white semi-collar and black head of the male © Alvaro Dellera

The typical behavior kept by this small bird has originated in the various regions the most varied names but grosso modo all are linked to this reference. Without a pole for leaning, a fence, a dry shrub or any perch however low it may be, probably there would be no common stonechat. Hence literally to jump from one topic to another, being the topic a pole, has become the motto of this bird, in any case unconscious and innocent of the human sin implied in the saying.

The common stonechat occupies a very vast territory that includes all the Asian continent from the transuralic Siberia to China and the coasts of the Pacific Ocean, excluding the southern tropical part that is however occupied during the winter period. In Europe, it occupies totally the Mediterranean area, the central-western part, the British islands, the Balkan area but is almost completely absent in the north-eastern part and in European Russia up to the Urals. It is extensively present also in Africa on the Mediterranean coasts from Morocco to Tunisia, with other numerous populations and subspecies, in the eastern part of the continent, from the Horn of Africa to South Africa and occasionally going up in the western part up to the Gulf of Guinea. In Italy it is widely diffused and is practically present on all the territory, excepting the highest sites and the woody areas. The vastity of the territory occupied by the common stonechat has originated a remarkable number of subspecies more or less recognized and accepted by the official taxonomy and among these, various are of African origin and as many of the palearctic. Most of these populations are subject to overlappings of territories during the nesting period as well as during the migratory movements and therefore they can produce diffused hybridizations that may create a further confusion in the determination of new subspecies. The matter is by sure still unresolved and is still base of debates. 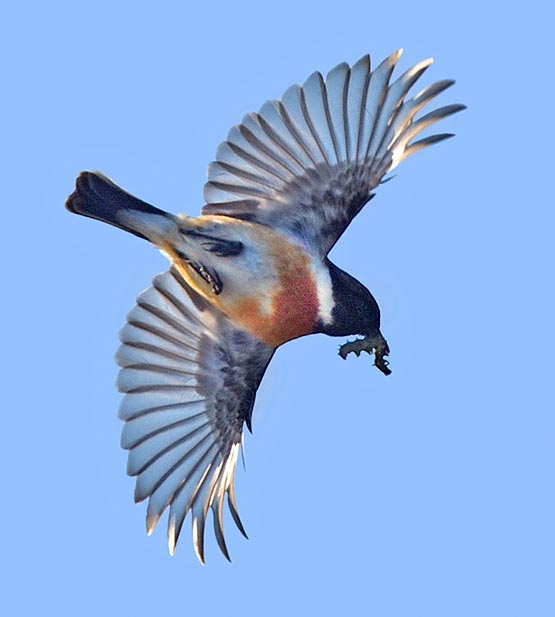 The common stonechat is a short range regular migrant during the bad season in the southern part of its ranges.

The European populations winter mainly in the southern part of the continent stopping at the Mediterranean coasts even if occasionally in particular weather conditions it can reach the Africa coasts.

The eastern European part and part of the central-Asian populations are medium range migrants and winter in the Middle-East are whilst the Siberian and the oriental ones winter in the tropical part of India and of south-eastern Asia.

The common stonechat avoids absolutely the thick forests, the woods and the highly treed zones and the high mountain at altitudes averagely over the 1500 m.

Places where the insects are abundant and visible from far away, while staying comfortably lurked on some prominence.

Usually it prefers arid and not cultivated zones where the use and the effect of the herbicides and insecticides utilized in agriculture are less intensive and harmful.

The common stonechat was much more common a few decades ago, even if their number did vary periodically in every winter, seen that periods with very rigid and strong temperatures and sudden snowfalls, led to a deadly decimation of the wintering populations with repercussions that lasted for various years after. It was able however to gain ground in short time even if these incidents had unluckily an announced periodic recurrence.

In north Italian plains the species has suffered from consistent decreases, with ultimate disappearances from areas once very frequented, caused surely by the systematic substitution of a diversified agriculture with an intensive monoculture that has cancelled indelebly that ideal habitat of yore. In other environments on the contrary, we note the normal periodical fluctuations typical of this species. 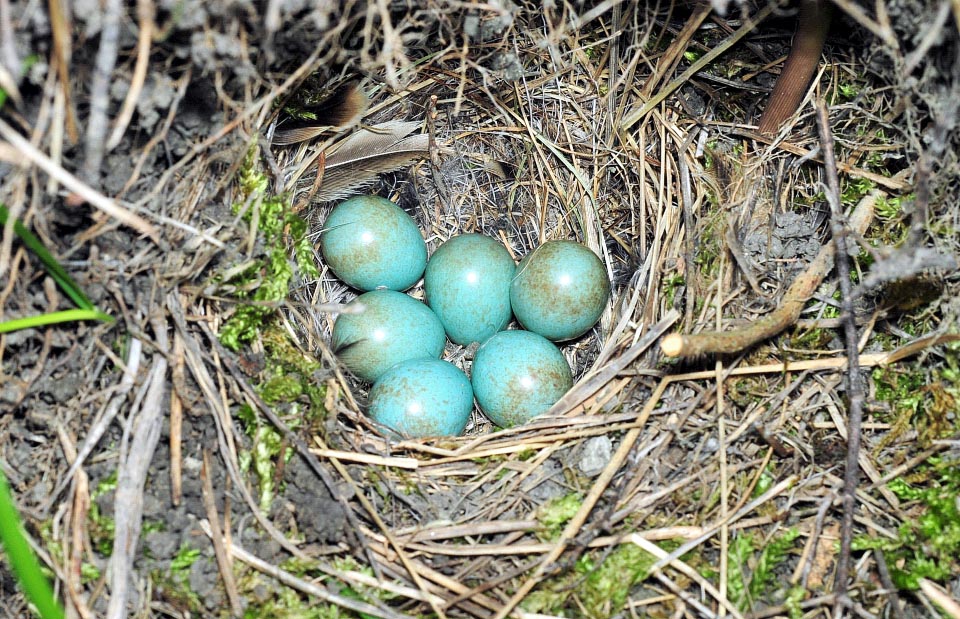 The nest is so well hidden into the grass that we must move it for seeing 5-6 light blue eggs, brown spotted and brooded by the female only for two weeks © Museo Civico di Lentate su Seveso

The common stonechat has very lively colours and surely well harmonius between them as well as well visible. Although it is a very shy little bird that takes off at the least fear or at the approach of whomsoever, it usually loves to show itself exposed on its customary perch ticking with its very sharp “uit tektek, uit tektek” or “sicceccè, sicceccè” as if it wants attract the curiosity of the passer-by to be observed. A clicking sound like the beating of an iron on an anvil by the blacksmith, so much to be called in some Venetian dialects favreto and favrut (small blacksmith). Actually, it is an alarm call but it emits it so insistently as soon as we get closer that it gives the idea of being more a presence signal than an alarm one. 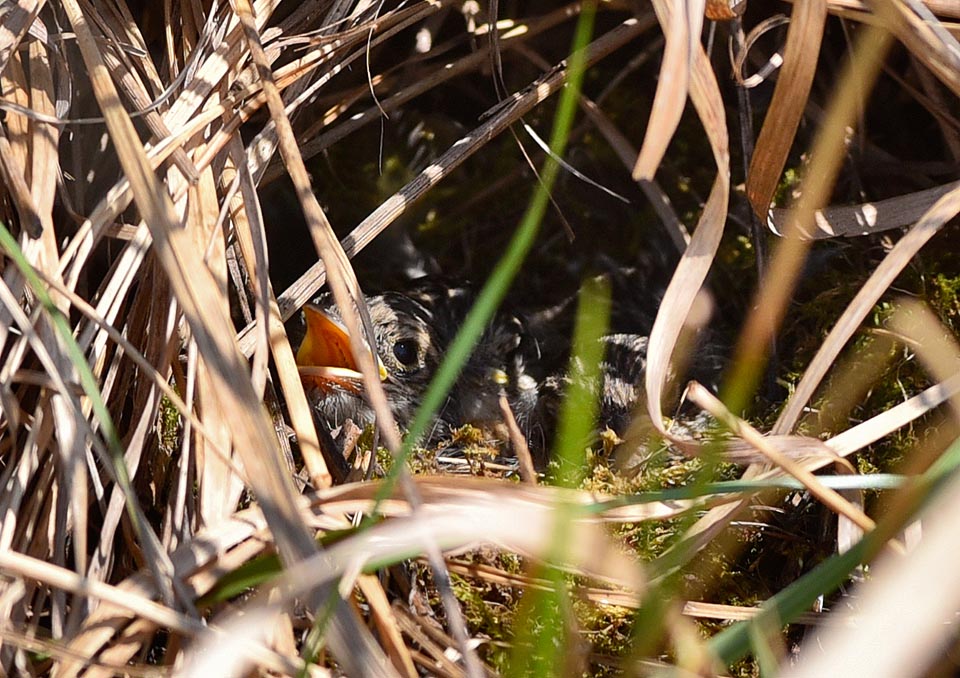 It often creates a very short tunnel in the grass to enter the nest and the chicks, terrestrial predators apart, are practically invisible © Museo Civico di Lentate su Seveso

The head, the throat and the nape are very black thus rendering almost invisible the eyes that do have the same colour. The shoulders, the covert and the tail are also raven black with a white spot on the shoulders, quite visible while flying.

The neck is very white and forms a very marked semi-collar whilst the chest is of a bright reddish orange colour that extends more or less diffusely on the abdomen depending on the species. Bill and legs are very black too.

Even if the tail of the common stonechat is relatively short, if referred to its size and that confers a fairly squat and rounded shape, it proves quite different from its congener, the Whinchat (Saxicola rubetra) with whom it is easily confused but who has it even more visibly reduced though accompanied by a more slender body. 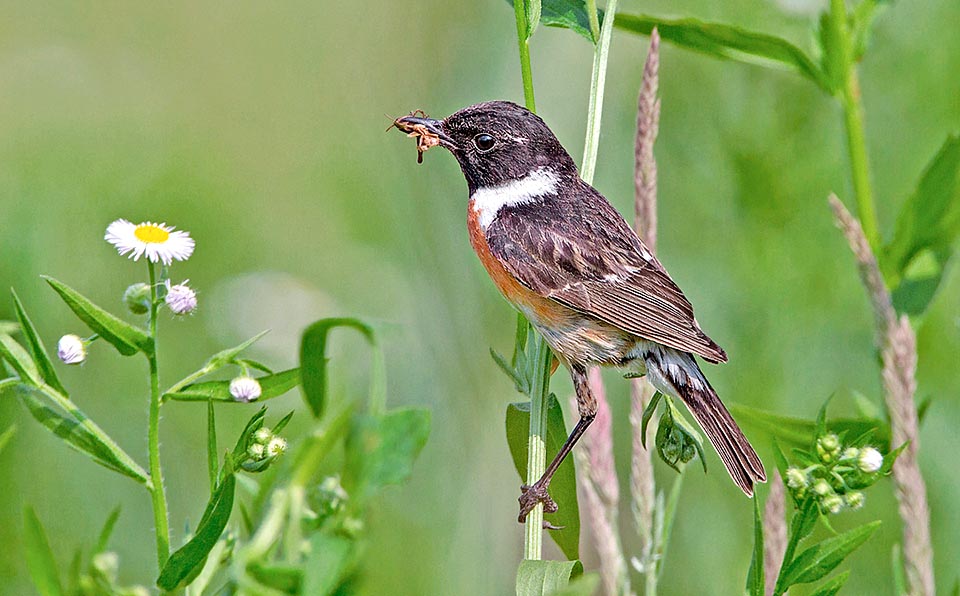 The female is of an uniformly orange colour without hood, blacks coverts and accentuated white collar, even if it reflects approximatively the same drawings. Also the male during the winter season loses its colours becoming very similar to the female. The young are very similar to a female with paler colours. 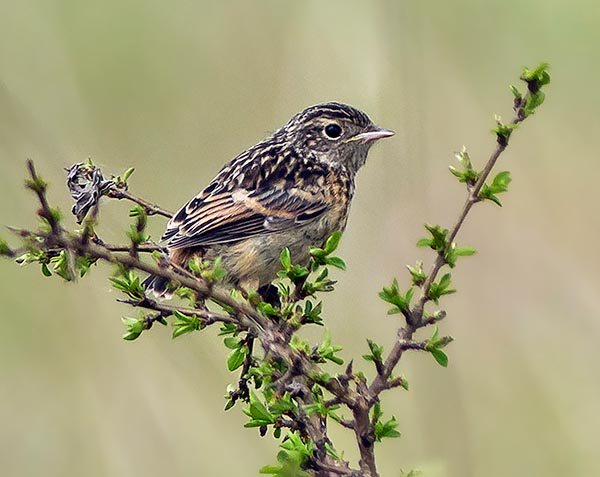 The couple is monogamous only for the season of nesting and is very territorial.

The nest is built on the ground hidden among the grasses, at times on completely flat land but often on sloping banks or falling gradients or humps and embankments or banks of ditches or edges of country lanes but always placed on the upper part of the slope and normally looking south, wonderfully hidden from the view because covered by the drooping tuft of the wisp of grass at which base it is located.

To say hidden is sometimes unrealistic because it is so well concealed that it is impossible to find it even if peering from very short distance. Often, for reaching the entrance, it creates a very short tunnel into the grass through which it then slips into the nest.

This is formed by blades of grass, moss and lichens, straw, hairs and rootlets to fill up a slight depression dug in the soil to form a well defined and sufficiently deep cup.

Usually are laid 5-6 eggs, of light blue colour, intense at times, finely spotted of brown and brooded by the female only for two weeks. The young stay in the nest another couple of weeks with precocious escapes that see often the chicks going out and wander around until when able to fly.

The common stonechat is insectivorous for most of the year in particular during the nesting period. It eats insects, winged as well as terrestrial, arachnids and worms. The small lepidopterans and dipterans are particularly welcome and are seized skillfully in flight, dashing from its usual perches. 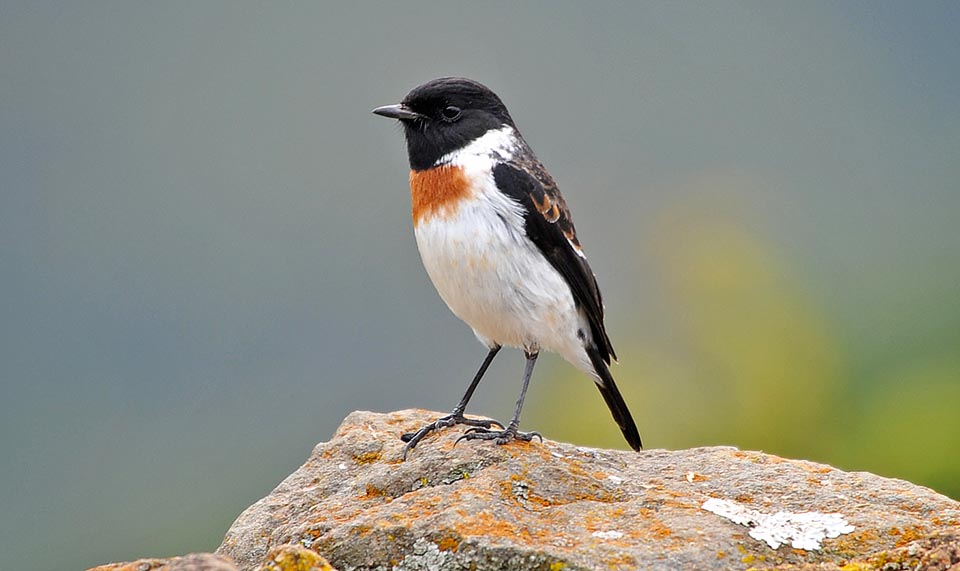 The species diffusion is very vast in the Old World with various subspecies that migrate short range overlapping and hybridizing. Here a Kenya Saxicola torquatus axillaris male with decidedly reduced orange spot. The Common stonechat is an insectivorous bird most of the year, especially in the nesting time © Gianfranco Colombo

During the bad season, period it spends not far from the summer territory, the weather conditions often do not guarantee the presence of a sufficient quantity of insects for the survival and therefore the feeding necessities are integrated with small seeds and berries. However, the attachment to the place chosen for wintering and the impossibility to move quickly long range to avoid sudden changes of the weather conditions and their persistence even for few days, cause often terrible reductions.