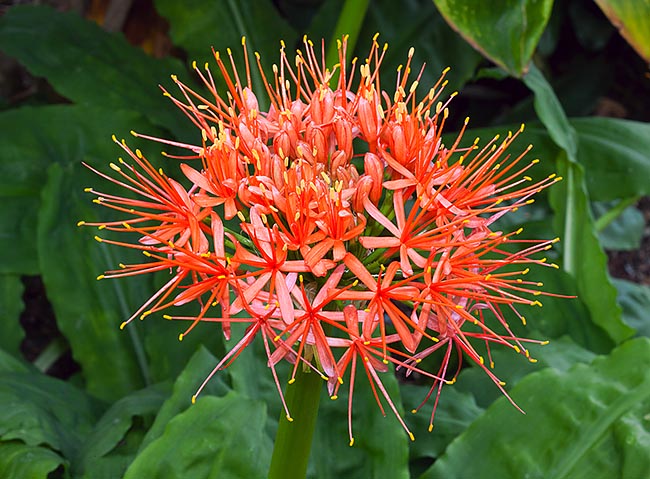 The species is native to South Africa and Swaziland, where it grows in the evergreen forests in zones characterized by seasonal climate with rainy summers and rather dry winters.

The etymology of the genus, not specified by the author, might come from the combination of the Greek terms “skia” = shade and “doxa” = glorious, as they are plants growing in shaded locations; the name of the species is the combination of the Latin terms “multus” = much and “flos, -oris” = flower, with obvious reference, whilst the subspecies is honoured to the English botanist collector and painter Katharine Saunders (1824-1901).

By late summer, from the centre of the foliar bases of the previous season, then laterally to the new leaves, emerges a floral scape 0,6-1 m long ending in an umbel spherical inflorescence, of 15-20 cm of diameter, carrying more than 100 flowers with 6 orange red tepals and 6 prominent red stamina with yellow anthers; the inflorescence lasts about 2 weeks.

The fruits are green berries, then red when ripe, containing one or more fleshy seeds. It reproduces by seed, which is to be planted as soon as ripe, with germination times of 2-6 weeks and first flowering starting from the fourth year of age, and by division, but it is preferable not to disturb the plant as long as possible in order not compromise the flowering.

This subspecies is the most ornamental and appreciated of the genus, of great effect utilized in mass as underwood, even when not flowering, due to the bright green foliage. It is cultivable in the tropical and subtropical climate zones with rainy summers and dry winters and marginally in the warm temperate ones where temperatures just less than 0 °C are short-lasting exceptions. It requires a semi-shaded to shaded position and soils rich in organic substance, sandy, well drained as it does not bear water stagnations; in the zones with dry summers it needs abundant waterings during the vegetative period, but allowing the substratum to dry up almost completely before giving water again.

It can be successfully cultivated also in pot, which must be large in order to permit it to expand without need of frequent repotting, utilizing an organic loam with addition of siliceous sand or agri-perlite, with winter temperatures, where the climate doesn’t allow its permanence in open air, not less than 10 °C.

All the parts of the plant are poisonous and are locally utilized in the traditional medicine.