Fragrance at last in the tea-rose varieties. The old hybrids of tea-rose had no perfume. Now they have obtained varieties with classic rose fragrances, but also of lemon, verbena, geranium, ripe fruit, anise or mowed grass. 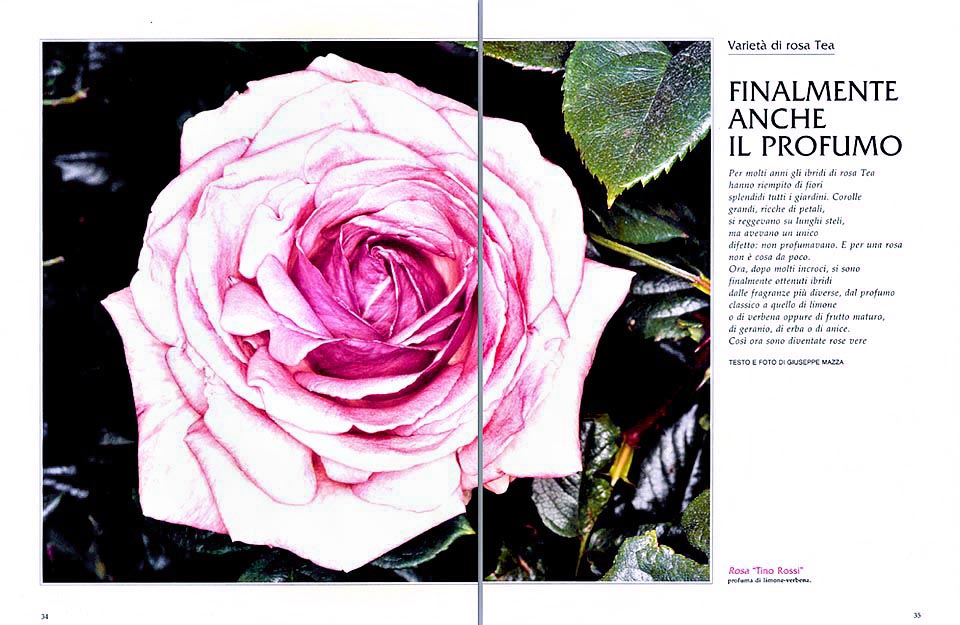 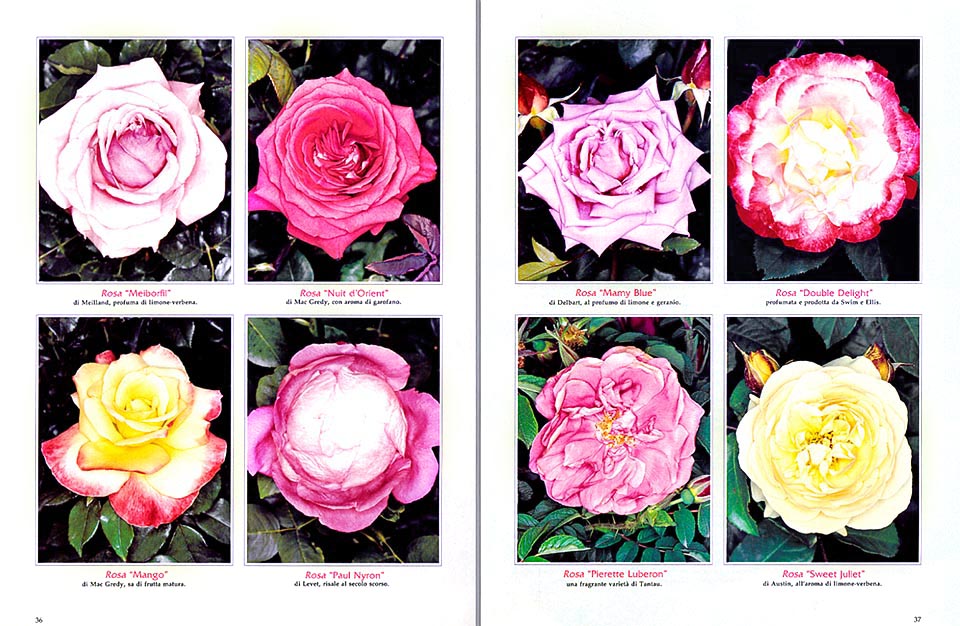 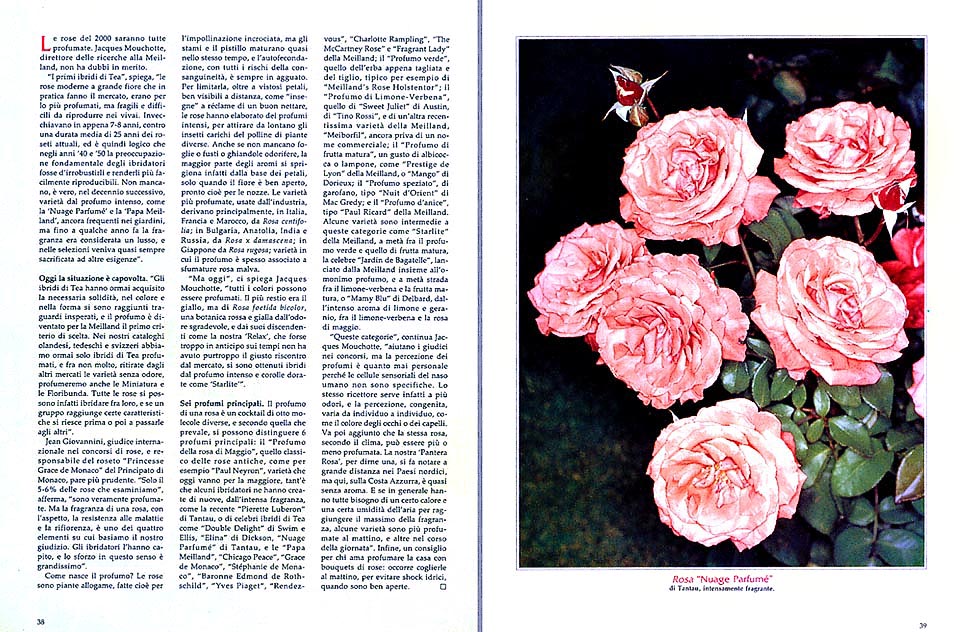 The roses of the year 2000 will all be perfumed. Jacques Mouchotte, director of the researches at Meilland’s, has no doubts about this.

The first hybrids of Tea, he explains to me, the modern roses with large flowers, which particularly are ruling the market, were mostly perfumed, but frail and difficult to reproduce in the nurseries. They were growing old in only 7-8 years, against an average duration of the 25 years of present rosaries, and it is therefore logical that during the forties and the fifties, the main worry of the hybridizer was to strengthen them and to render them more easily reproducible.

They are not missing, it’s true, during the following decade, varieties with intense perfume, such as the Nuage parfumé and the Papa Meilland, still frequent in the gardens, but until a few years ago, the fragrance was considered as something not necessary, and in the selections, it was, almost always, sacrificed in favour of other exigencies.

Nowadays, the situation is topsy-turvy. The Hybrids of Tea have , at last, acquired the necessary solidity, unexpected results have been reached in the colour and in the form, and the perfume has become, for the Meilland, the fist criterion of choice.

In our Dutch, German and Swiss catalogues, we have now only Hybrids of Tea perfumed, and in short time, withdrawn from the other markets the odourless varieties, we shall perfume also the Miniatures and the Floribunde. All the roses can hybridize between them, and if a group reaches certain characteristics, we are able, sooner or later, to pass them to the other ones.

Jean Giovannini, international judge in the roses contests, and person in charge of the rosary “Princesse Grace de Monaco”, of the Principality of Monaco, seems more cautious.

Only 5-6% of the roses we examine, he asserts, are really perfumed. But the fragrance of a rose, along with the aspect, the resistance to the diseases, and the re-blossoming, is one of the four elements on which we base our judgements. The hybridizers have understood this, and the effort in this direction, is very big.

How does the perfume form? The roses are allogamous, that is, done for the cross pollination, but the stamens and the pistil ripen almost at the same time, and the self fecundation, with all the risks of consanguinity, is always in ambush.

For limiting it, besides the showy petals, well visible from far away, as “signboards”, advertising a good nectar, the roses have elaborated intense perfumes, for attracting, from the distance, the insects loaded of the pollen of different plants.

Even if they do not lack of leaves or stems with odoriferous glands, most of the aromas issue, in fact, from the base of the petals, only when the flower is wide open, ready for the marriage.

The most perfumed varieties, utilized by the industry, come mainly, in Italy, France and Morocco, from the Rosa certifolia; in Bulgaria, Anatolia, India and Russia, from the Rosa x damascena; in Japan, from the Rosa rugosa, variety where the perfume is often associated with mauve pink gradations.

But nowadays, Jacques Mouchotte explains to me, all colours can be perfumed. The more reluctant was the yellow, but from the Rosa foetida bicolor, a red and yellow botanical, with unpleasant odour, and from its descendants like our Relax, which being, maybe, too much in advance with the times, did not get the right appreciation from the market, they have obtained hybrids with intense perfume and golden corollas, like the Starlite.

Then, he explains to me, that the fragrance of the roses depends, mainly, by eight molecules: the Rhodinol and the Citronnellol, which form the 38-45% of the attars of roses; the Geraniol and the Nerol, present for the 20-25%; the Alcohol beta-Phenylethylique, with the 3-4%; the Linalol, with the 2-3%, the Eugenol, and the Methyl Eugenol, with the 2-3%.

The perfume of a rose is a cocktail of these substances, and depending on the prevailing one, we can distinguish six main perfumes.

The “Perfume of the Rose of May”, the classical one of the old roses, like, for instance, the Paul Neyron, varieties which now are very popular, and in fact some hybridizers have created new ones of them, with an intense fragrance, like the recent Pierette Luberon of Tantau, or of celebrated Hybrids of Tea, such as the Double Delight of Swim and Ellis, the Elina, of Dickson, the Nuage Parfumé, of Tantau, and the Papa Meilland, Chicago Peace, Grace de Monaco, Stéphanie de Monaco, Baronne de Rotschild, Yves Piaget, Rendez-vous, Charlotte Rampling, The Mc Cartney Rose, and Fragrant Lady, all of Meilland.

The “Perfume green”, the one of the just mown grass, and of the lime-tree, typical, for instance, of the Meilland’s Rose Holstentor.

The “Perfume of Lemon-Vervain”, the one of the Sweet Juliet, of Austin, of the Tino Rossi, and another quite recent variety of Meilland, the Meiborfil, still not provided of a commercial name.

The “Perfume of ripe fruit”, a taste of apricot or raspberry, like the Prestige of Lyon, of Meilland, or the Mango, of Dorieux.

The “Perfume of spices”, of carnation, such as the Nuit d’Orient of Mac Gredy.

The “Perfume of anise”, like the Paul Ricard of Meilland.

These categories, Jacques Mouchotte goes on, help the judges in the competitions, but the perception of the perfumes is very personal, as the sensorial cells of the human nose are not specific. The same reception, in fact, serves several odours, and the perception, congenital, varies from an individual to another, like the colour of the eyes or of the hair. Then, we have to add, that the same rose, depending on the climate, can be more or less perfumed.

Our Pantera Rosa, just to say, is noticed in the distance in the northern countries, but here, in the Côte d’Azur, it is almost odourless. And if, generally, they all need a certain warmth and humidity of the air to reach the top of the fragrance, some varieties are more perfumed in the morning, and others during the day.

He gives me, then, a valuable suggestion for those loving to perfume the house with bouquets of roses: they must be picked up in the morning, to avoid water shocks, when they are open.

The florists’ ones, even if belonging to prestigious perfumed varieties for cut flowers, such as the Jacaranda, the Cocktail 80, and the Marella, lose in fact most of their fragrance because picked up when in bud for the transportation, at a stage where they have not yet had the time to develop their aroma.

Scented Roses : also between the new Tea Hybrids was last modified: May 24th, 2019 by Giuseppe Mazza