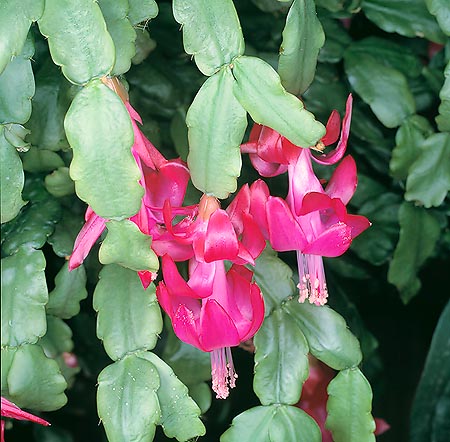 The Schlumbergera x buckleyi (T. Moore) Tjaden (1966) is a hybrid between Schlumbergera truncata and Schlumbergera russelliana, epiphytes native to the forests of Brazil, obtained for the first time around the 1840 by the London floriculturist Wilbraham Buckley.

The two plants are native to the same area, the Serra dos Orgaos in the state of Rio de Janeiro, but live at different altitudes, the truncata between 700 and 1000 m, the russelliana between 1300 and 2200 m, also their blossoming period is different, May-June for the truncata, July-September for the russelliana, therefore natural hybrids between the two plants do not exist.

The genus is honoured to the French collector of succulents, Frédéric Schlumberger (1823-1893).

Epiphytic cactus, very ramified, hanging down, which can reach, in the aged specimens, a diameter of 50-60 cm.

It has segments (phylloclades), 3-4 cm long, the lower ones are rounded, with brown epidermis, the upper ones, younger, obovate, rather flat, 1,5-2 cm broad and 3-8 mm thick, of green colour, crenate margin (that is, with rounded notches, not sharpen like in the Schlumbergera truncata, with which it is often mistaken), truncated apex and areolas, in the hollows of the margins, possibly provided of some short bristles. The flowers are terminal, hanging, bell-shaped, symmetric, 4-5 cm long and 3-4 cm broad; the tepals are turned backward and are all of the same colour, magenta or pink, but of different dimensions, the outer ones shorter, the inner ones longer and wider, placed in such a way to give the impression of a sequence of more flowers one inside the other. Usually, in the boreal hemisphere, it blossoms between the end of December and March, from which the common name with which it is generally known in Europe and North America, between May and August in the austral one. The hybrid is fertile, but self-incompatible, like the parents.

It easily reproduces via the single segments left to dry up for 1-2 days and placed to root in a very aerated substratum, formed mostly by siliceous sand or agri-perlite. Hybrid amply utilized in the programmes of hybridisation for getting new varieties, presently more than one hundred, generically indicated with the same name of with the common name of “holiday cactus” or “Christmas cactus”, seen that their abundant and showy blossoming takes place, usually, in the northern hemisphere during the period of Christmas festivities, which has originated an intense production and commercialization, which only in recent times has known a slight slowdown. 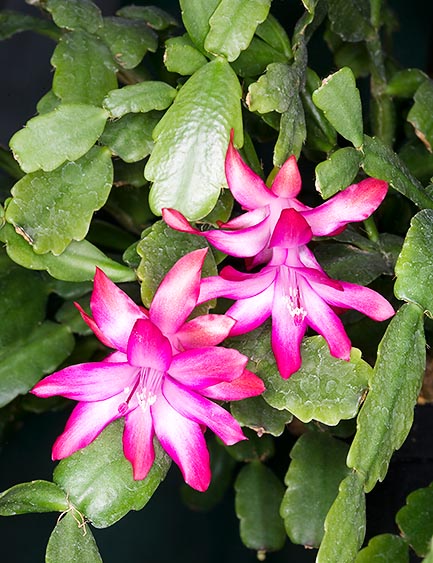 It does not have difficulties of cultivation and can blossom every year if some simple rules are respected, that is to keep in mind the habitat and the annual vegetating cycle of the parents, of which it has intermediate characteristics.

Both parents live in the misty forest, on trees or in the fissures of the rocks, on substrata coming from the decomposition of plant debris; they are short-day plants, that is the blossoming is stimulated when the darkness hours are more than the light ones, and have a period of rest, rather dry and cool, in autumn (austral) which stimulates the blossoming.

The hybrid and its varieties are therefore to be cultivated in luminous places, but far from the direct sun, or just for one-two hours in winter, in slightly acidic or neuter substrata, perfectly draining and very aerated, which can be formed by coarse peat lightened with agri-perlite or siliceous sand; watering must be regular, but allowing the superficial layer to dry up between each watering, keeping always in mind that the excess of water can easily cause rottenness.

In summer, it can be placed in open spaces in a shady, humid and cool location, as it does not like much an excessive summer heat, in autumn-winter, the ideal temperature is included between 10 and 20 °C, even if it can stand, for very short time, temperatures of a few grades under 0 °C, but temperatures lower than 10 °C do not allow the formation of the buds, and therefore they are to be avoided.

For getting the blossoming by Christmas time, if the plant is placed in a room without artificial light which may prolong the light hours, no intervention is needed, the natural difference in the period between day and night in the northern hemisphere is sufficient to stimulate the blossoming, otherwise, it is necessary to act in way that from the beginning of autumn the plant gets for 6-7 weeks no more than 9-10 hours of light per day, period which is sufficient to get formation of the buds, from this moment, then, this regimen will not be any more necessary. Alternatively, and independently from the duration of the hours of light, the blossoming can be stimulated keeping in the same time and for the same duration, the plant at a temperature included between 10 and 15 °C, also in this case, once the formation of buds has started, the plant can be placed in a warmer location, but without exceeding the 22-24 °C.

Possible manure are to be effected, once-twice per month, from the vegetative resumption (around March) till September, with a balanced water soluble fertilizer (10-10-10 type), by half of the suggested dosage, from September up to the blossoming with a manure rich of potassium, then to suspend from the end of the blossoming till the vegetative resumption, when the plant has a short period of rest.

One of the most frequently occurring problems is the fall of the buds during their growing stage, this can have different causes, too low or too high temperatures, out from the ideal interval cited before, too dry or too humid substratum and little aerated, but, mainly, sudden room variations. After the beginning of the formation of the buds, the plant is not to be moved any more from the location where it has been placed, or turned; the location must be far away from currents of air and sources of heat.

The plant is at times grafted on Pereskia aculeata for exalting its hanging look.