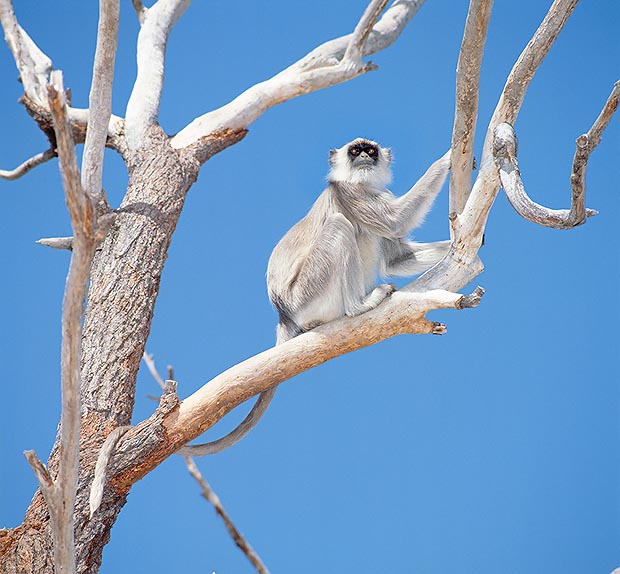 After some primatological biologists, the species Presbytis entellus, nowadays should be called, however, Semnopithecus entellus, thus having the family coinciding with the genus. The entellus are also called “langurs”.

As it has already been discussed in other texts on the primates, their taxonomy is in continuous development and remodelling, whereby also this species is subject to continuous changes of scientific denomination. The Presbytis entellus is called the Northern plains gray langur or also the “Indian sacred monkey”, because in the Hindu mythology it is believed to be the incarnation of the deity Hanuman, the king of the monkeys, from which comes also the current name of hanuman. 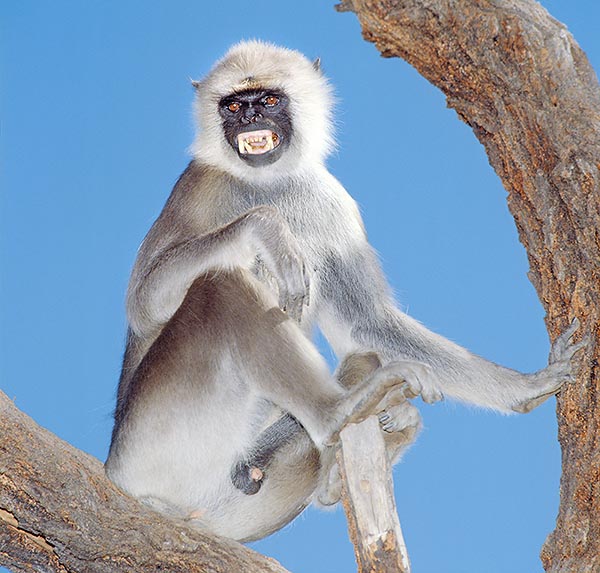 The entellus are distributed all over India, from Himalaya and Nepal, where they reach the 4.000 m of altitude, to the island of Sri Lanka, and are settled in the plains south of Ganges and north of the rivers Krishna and Godavari. They are present also in Pakistan.

They are monkeys with arboreal habits. They move with great agility between the branches, whilst, once on the ground, they walk awkwardly. In addition to the tropical and subtropical forests, they are also found in the bush and the thicket of the same geographical belts.

They have a vegetarian diet, as they nourish of fruits, berries, rhizomes, buds, but also of raids done in the cultivated fields and in the orchards, where they may cause serious damages, with impunity, thanks to their status of sacred animals.

In any case, the proximity of water is very important for the settlement of these primates.

The entellus, or langur, or hanuman, (Presbytis entellus or Semnopithecus entellus) has a medium size tapered body which reaches the 40-80 cm, with an even longer tail. Among the most interesting anatomical characteristics, we have to pinpoint the presence of an ample and lobulated stomach, which stands in close relation to the alimentation of vegetarian type. 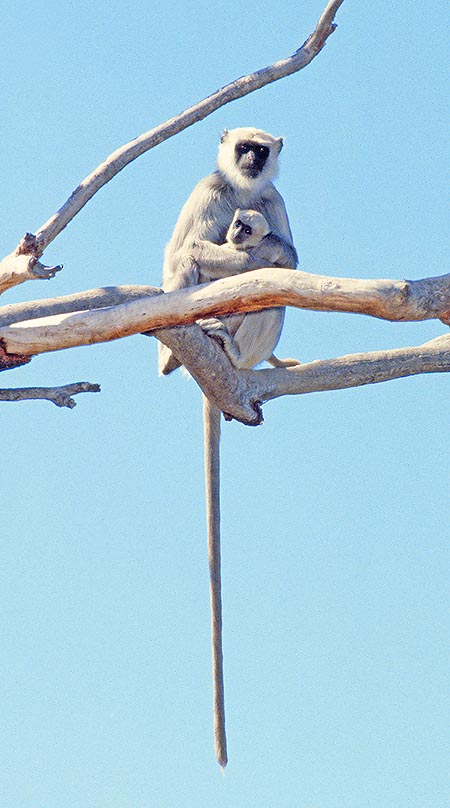 Tail is huge, and the mothers train the cubs for 15 months © Giuseppe Mazza

The skeleton is light, and allows this monkey to have agile and elegant movements. The ischiatic callosities are not much developed.

The head is rounded with a supra-orbital visor. The forelimbs, shorter than the hind ones, have a residual of thumb reduced to a tubercle without nail. Conversely, the thumb of the hind-limbs is normally developed, and has a prehensile function.

The colour of the fur varies depending on the geographic area to which they belong. Usually, the base colour of the trunk is greyish with silvery reflexes, whilst the head is white. The hands, feet and face are glabrous, covered by a violaceous-black and wrinkled skin. The hair is not much long, even if thick and soft; it becomes longer and forms a mane around the face.

They weigh about 10-15 kg, even if the biologists, during the fifties of the last century, have found in Nepal an individual reaching the record weight of 26,3 kg!

There is no dimorphism among male and female.

The langurs or entellus live in well organized social groups, formed by about ten elements, where the ecological habitat is favourable; but these groups may reach more than a hundred of units in the areas where the water is scarce.

These agglomerations of monkeys have a rigid structure. At its centre are the male leaders, with the females and the young under breeding, whilst the sub-adults live at the periphery.

But there are also groups formed by males only, or even isolated individuals, which, by night do aggregate in a group on a dormitory tree.

While looking for food and water, it may happen that two groups meet on the same tree or close to the same source. In this case, they mix peacefully without any phenomena of aggressiveness.

Often, inside their group, they welcome accept also solitary individuals of other species, in particular the macaques.

After some primatological biologists, their poor aggressiveness might have an explanation: they have electively an arboreal life, and therefore they do not need to get militarized.

Also in this species, during the resting time, we may observe the phenomenon of the “grooming”, as process of socialization. 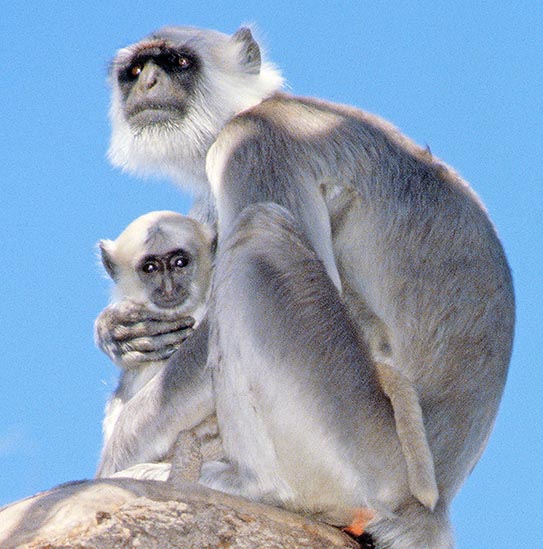 All females care the cubs. If one is left orphan, it's adopted at once © Giuseppe Mazza

Theoretically, the Semnopithecus entellus might mate along the whole year, but especially for the populations living in cold winters locations, there is a preferential period. In Himalaya, Nepal and Pakistan, for instance, the offspring come to life usually late in the spring. The gestation time is of about 196 days and one infant comes to life at a time. The mother’s breastfeeding lasts one year.

The presence of newborns in the group stimulates the maternal instinct in the other females, which show very solicitous in administering alloparental cares also to others’ offspring. This particular tenderness which allows also the adoption of orphans is induced by the colour and the calls of the children. As a matter of fact, when the small langur grows up and its colour becomes paler, the other females still help it, but do not carry it in their arms, as on the contrary continues to do its biological mother.

The relationship with the mother is extremely important for the psychological development and the education of the young langur, which will live close to the mother for about 15 months, thus learning, a little at a time, all the notions which are indispensable for the adult life.

Once reached the full autonomy, the young associates with peers of the same sex; if it’s a female, it will live in the centre of the group, if it’s a male, it will tend, on the contrary, to move towards the periphery, where it will have more room for its games.

The IUCN luckily deems this species as having a minimum risk of extinction.