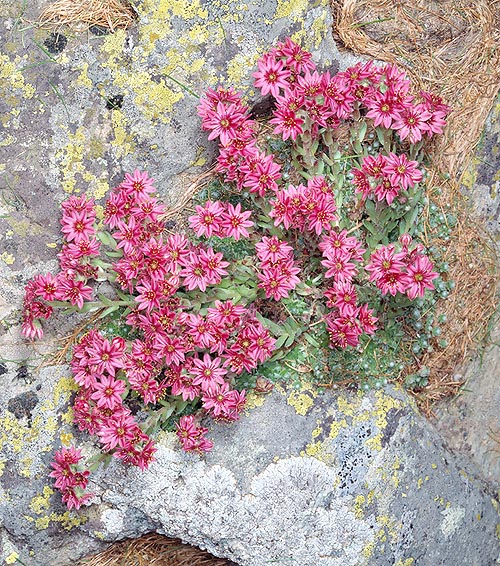 The Sempervivum arachnoideum lives even in little soil, up to 3000 m © Giuseppe Mazza

This plant is native to Europe (Austria, France, Germany, Italy, Spain and Switzerland), where is present on the Alps, the Apennines, the Cantabrian Mountains, the Pyrenees and the Corsica mountains, on rocks and stony soils, mainly siliceous and in particularly arid situations, usually between the 1.500 and the 3.000 m of altitude.

The name of the genus is the combination of the Latin words “semper” = always, and “vivum” = alive, with reference to its survival capabilities in climatically hostile habitats; the name of the species is the combination of the Greek word “arăchnē”= spider, and by the suffix “-oeidḗs”, from “êidos” = shape, look, with reference to the filaments covering the leaves.

The Sempervivum arachnoideum L. (1753) is a perennial succulent plant, forming compact tufts, monocarpic (it blooms only once, then dies), with 50-70 persistent succulent leaves, alternate, united in a thick basal rosette of 1,5-2 cm of diameter, and covered, especially in the central part, by an intricate net of white filaments. The leaves are sessile (without petiole), obovate, 1,2 cm long, of green colour frequently suffused with red towards the extremity, with ciliate margins and surface covered by glandular hairs; during the growth of the leaves, from the apical glands is emitted a filamentous net which forms the typical net covering it and which tends to disappear from the oldest leaves.

Summer inflorescences in terminal cymes on a 6 to 12 cm tall scape, with 3-8 flowers of 2 cm of diameter, each one with 8 to 12 petals of linear lanceolate shape, extended, pointed and with ciliate margins, about 1 cm long, of carmine pink colour with a darker central band.

The floral scape is provided with lanceolate, imbricate, pubescent, leaves, about 1,5 cm long, of green colour with brown red shades more intense on the extremities and with a short tuft of whitish hairs at the apex. The fruits are follicles containing ovoid, 0,8 mm long and of yellowish brown colour. After the fructification, as already briefly told, the rosette dies, replaced by the near ones. 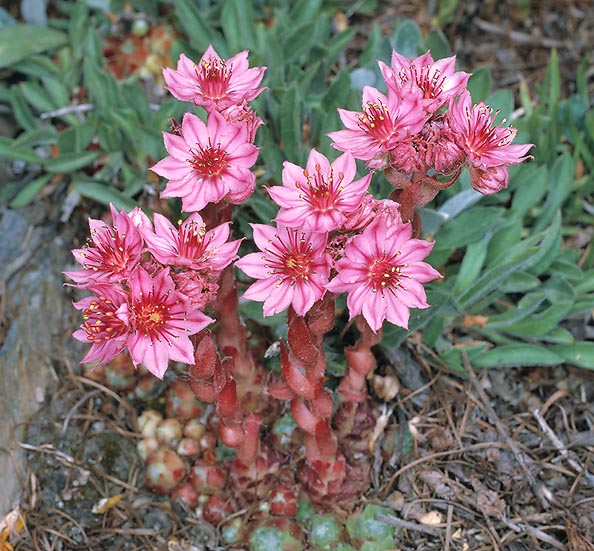 Locally protected, it has medicinal virtues and an undoubted ornamental value © Giuseppe Mazza

It reproduces by seed, placed in surface, which germinates in 2-4 weeks at a temperature of 20°C, and, very easily, by division.

It is a much appropriate name for a kind of plants capable to live taking advantage from the little substratum which may be accumulated in the rocks.

It bears strong winds, strong daily and seasonal changes of temperature, from -30 °C to +50 °C, high humidity in spring, by the melting time, and summer aridity caused by the intense insolation to which it is submitted.

It is a plant suitable for rock and alpine gardens, as mantling and between the cracks of the stones, and for edges, in full sun and on much draining substrata, possibly acid, but adapting well, if it’s the case, also to calcareous soils.

It is often cultivated in pot by the lovers of succulents at the most possible luminosity and with substrata with addition of sand or rubble, preferably siliceous, up to the 50%.

It needs more humidity by the vegetative renewal, in spring and till mid summer, then regular watering, but always allowing the substratum to dry for some days before irrigating again; later on, the watering are to be reduced and finally almost suspended in winter.

This plant has been variously utilized by the local populations in the traditional medicine and, furthermore, when growing on the roofs, it was reputed to protect the houses from the thunderbolts and the witchcrafts. Locally, it is inserted into the lists of the protected species.