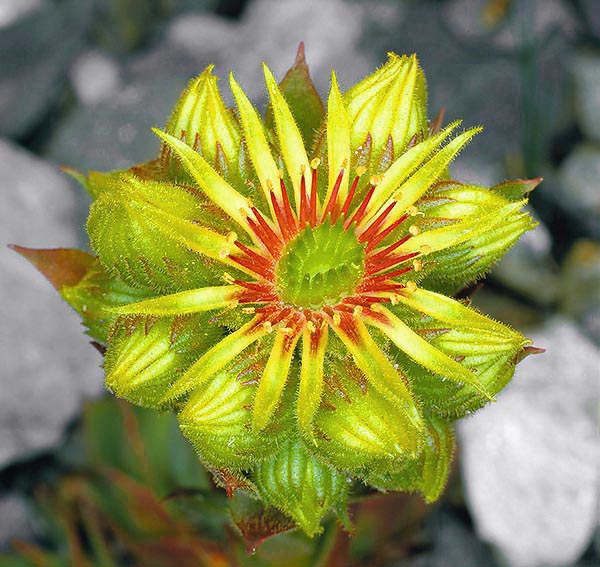 This plant is native to Austria, Bosnia, Croatia, Italy, Macedonia, Montenegro, Serbia, Slovenia and Switzerland, where it grows on the Eastern and Dinaric Alps, between the 1.500 and the 2.800 m of altitude, on rocks and on stony and siliceous soils, in situations particularly arid due to the intense insolation to which they are submitted in summer.

The name of the genus is the combination of the Latin words “semper” = always and “vivum” = alive, with reference to its survival capability in climatically hostile habitats; the species is honoured to the Austrian botanist Franz Xaver von Wulfen (1728-1805).

The Sempervivum wulfenii Hoppe ex Mert. & W.D.J.Koch (1831) is a succulent, perennial, stoloniferous, monocarpic (it blooms only once, then dies) plant, with persistent, alternate and succulent leaves, united in a basal rosette of 3-6 cm of diameter. The leaves are sessile (without petiole), 2-3 cm long, obovate with ciliate margins and pointed apex, of a glaucous green colour tinged with red at the base, and slightly at the apex.

The inflorescences do appear in summer in compact terminal cymes, on a 10-25 tall scape, and carry several flowers of 2-3 cm of diameter, with 12-18 linear and pointed petals, about 1 cm long, of lemon yellow colour, with a reddish dot at the base, externally covered by thick glandular hairs. The floral scape is provided with lanceolate, pale green, leaves, at times tinged with red, about 3,5 cm long.

The fruits are follicles containing several tiny seeds. After the fructification, as previously already briefly said, the rosette dies, replaced by the close ones. Usually it easily reproduces by division and by seed in spring, to be distributed in surface on a substratum formed by soil and coarse sand or crushed siliceous stones in equal parts, to be placed in full sun or at the maximum possible illumination.

Calcifugous plant, not much diffused, both in the wild and in cultivation, it is suitable for rock, alpine, gardens and for edges in full sun, on much draining substrata, but also for the pot cultivation, at the maximum possible illumination and with substrata with addition of sand or siliceous crushed stones up to the 50%.

It resists to the low temperatures up to -20 °C, and more, as well as to the high ones and to long drought periods. In cultivation, it needs more humidity by the time of the vegetative renewal, in spring, and till mid summer; then regular watering, but always allowing the substratum to dry up for some days before irrigating again; then watering are to be more spaced and finally almost suspended in winter.

It is locally inserted in the protected species.