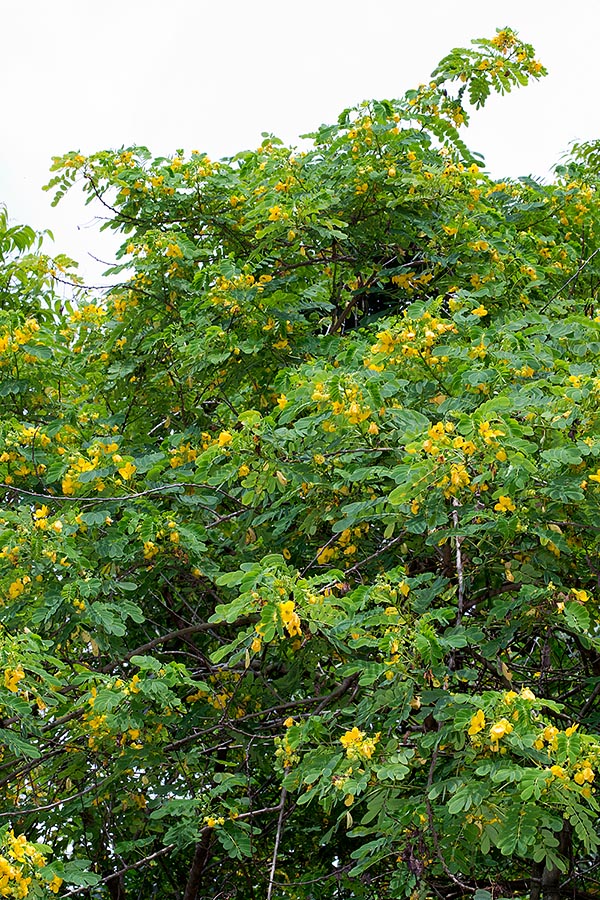 The exact place of origin is not known, they think it may be native to Australia (Queensland, Northern Territory and Western Australia), Bangladesh, Bismarck Archipelago, India, Indonesia, Irian Jaya, Malaysia, Myanmar, Papua New Guinea, Philippines, Thailand and Vitenam where is present in the forests at low altitudes.

The name of the genus comes from the Arabic “sanā” with which was called the Senna alexandrina Mill.; the name of the species is the Latin adjective “surattensis, e” = of Surat, city and district of the Indian state of the Gujarat, with reference to one of its places of origin.

The Senna surattensis (Burm.f.) H.S.Irwin & Barneby (1982) is a shrub or small erect evergreen tree, 5-8 m tall, with brown-greyish smooth bark, tending to fissure slightly with the age, and dense and rounded top. The leaves, on a 2-3 cm long petiole, are alternate, paripinnate, 10-15 cm long, with pubescent rachis, linear stipules, 0,5-1 cm long, and 7-9 couples of opposite leaflets, oblong-elliptic with rounded apex, 2,5-5 cm long and 1-1,6 cm broad, of intense green colour and glabrous above, glaucous and slightly pubescent below. A gland, about 1 mm long, is present at the base of the pedicel of the first 2-3 couples of leaflets.

It usually reproduces by seed, previously scarified in order to accelerate the germinative process, in draining loam maintained humid at the temperature of 24-26 °C, with germination times of 3-4 weeks and first blooming after 2-3 years. Fast growing species amply diffused for ornamental purpose due to the bright blooming, that continues for most of the year, in parks and gardens and as road tree in the tropical, subtropical and temperate-warm climate zones where it can behave as semideciduous and resist to temperatures up to -2 °C with damage to the foliage; in many places where it has naturalized it is considered as potentially infesting. 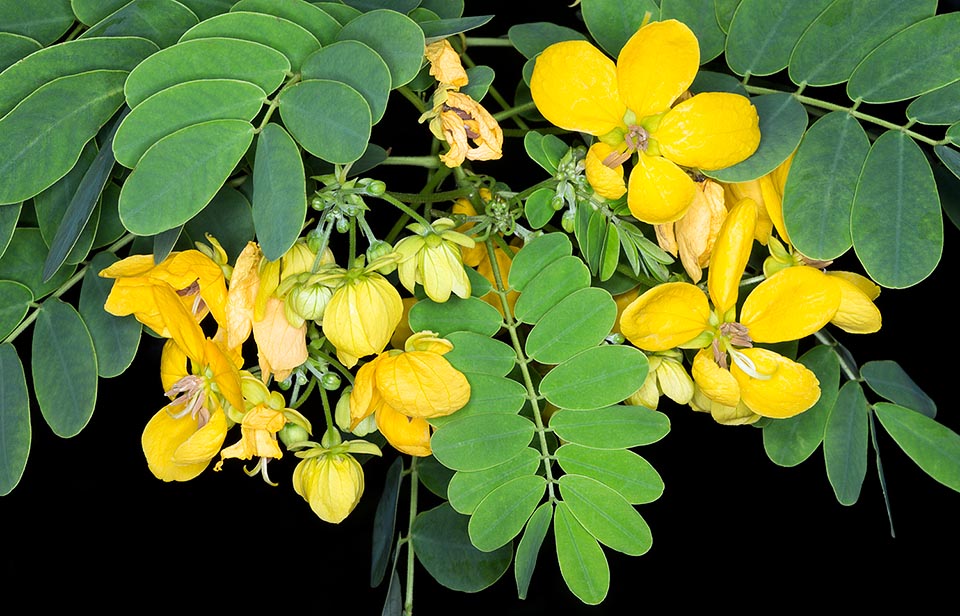 Easy cultivation and fast growth in and around the tropics, where lowest are never less than -2 °C. Ornamental with edible leaves and medicinal virtues © G. Mazza

It requires full sun, or at most a slight shade, and draining soils, even if poor, slightly acidic to alkaline, it has a high resistance to the urban pollution, moderate to the saltiness and, well rooted, to drought periods, but grows best in rich soils maintained constantly humid. Cultivable also in large containers for the decoration of greenhouses and winter gardens at the maximum possible luminosity and with lowest temperature values preferably over the 14 °C. The young leaves are locally consumed cooked as vegetables; various parts of the plant are utilized in the traditional medicine for various pathologies, flowers and legumes as purgatives.