The species is native in USA (Alabama, Florida, Georgia, Louisiana, Mississippi and South Carolina) where it lives in the conifer woods, prairies and coastal dunes, often forming thick colonioes, on usually sandy and arid soils.

The genus is honoured to the American botanist Sereno Watson (1826-92); the specific Latin name “repens” is the present participle of the verb “repo” = to creep, with reference to the usually prostrate posture. 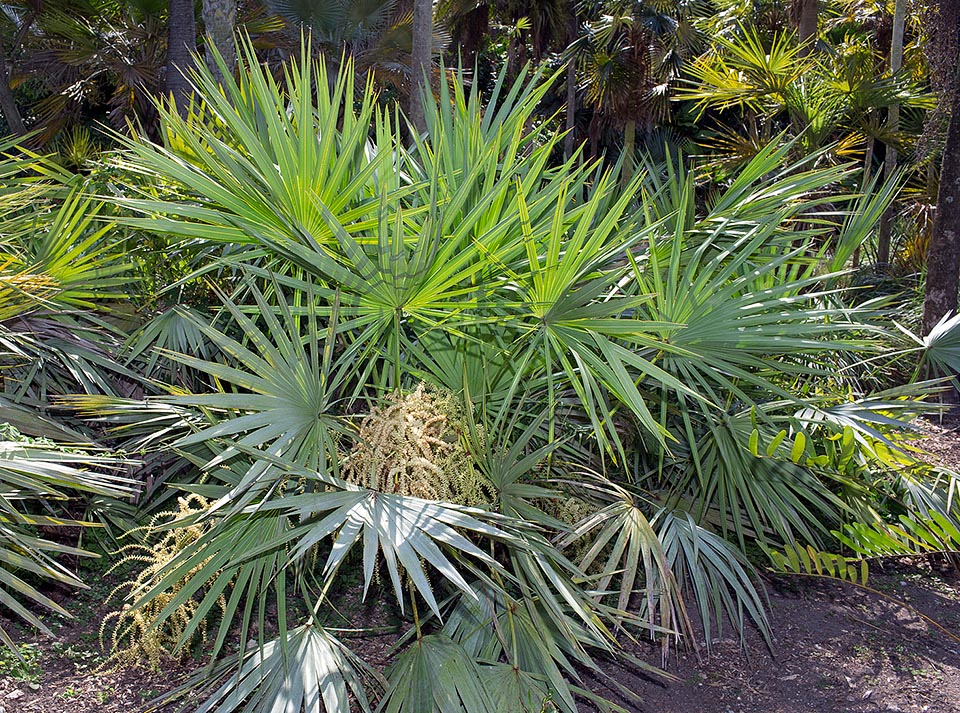 The Serenoa repens (W.Bartram) Small (1926) is a caespitose monoecious species with stems usually underground or creeping, rarely erect, up to 6 m long; the underground or creeping on the soil stems may root and produce new plants. The leaves are palmate, almost circular, of 40-90 cm of diameter, regularly divided up to more then half in rigid segments with just bifid apex, usually of green colour or yellowish green, less frequently green glaucous; the dry leaves persist long time on the plant and are frequent cause of fires. The petiole, 0,6-1 m long, is provided at the margins of small thorns and the hastula (appendix placed in the insertion point of the foliar lamina with the petiole) is present on both sides of the leaf. Ramified inflorescences between the leaves (interfoliar), that usually do not much exceed the length of the petiole, with a crowd of hermaphroditic flowers of white cream colour arranged spirally, of about 5 mm of diameter, with 6 stamina, that emit an intense fragrance reminding the anise. 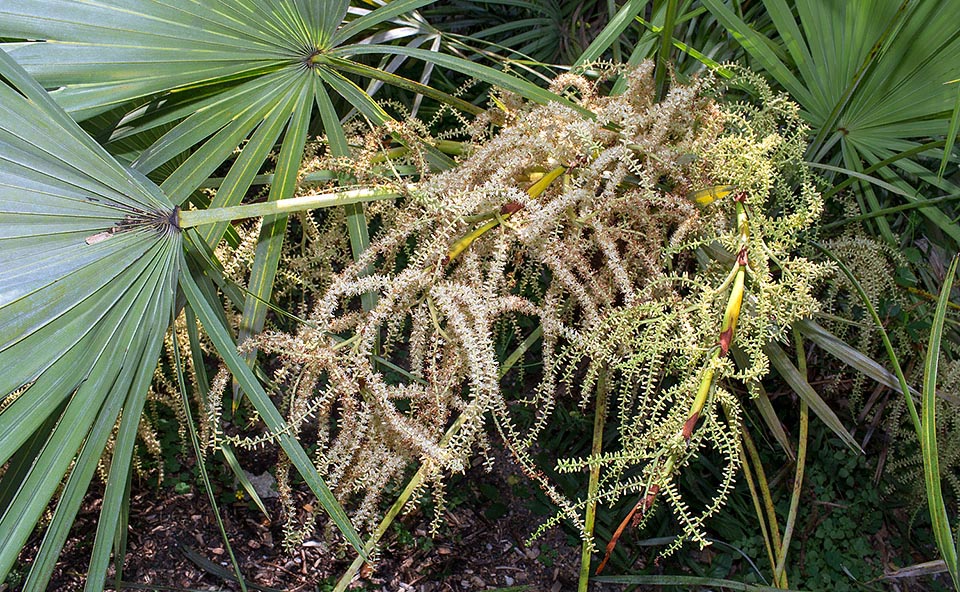 It usually reproduces by seed, previously cleaned of the pulp and kept in water per two days, in sandy loam maintained constantly hulid, at the temperature of 22-28 °C; the germination is erratic, starting from one month, if fresh, up to various months. The propagation by devision of the tufts has a fairly low success rate, due to the rooting apparatus that does not like to be disturbed, therefore this method is rarely used; for the same reason it does not stand the transplants. 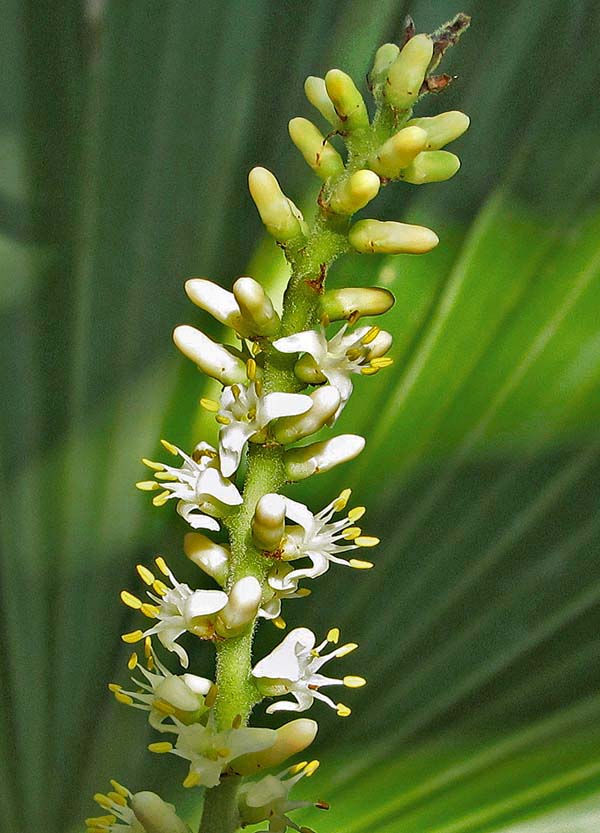 Corollas of about 5 mm of diameter. The six stamens emit an intense anise scent © Pietro Puccio

Vigourous species, but with a particularly slow growth, cultivable in the tropical, subtropical and temperate climate regions, where it can resist to temperatures up to -10 °C, even some degree less if protected and with damage to the foliage. It can grow in full sun as well as in partial shade and in an ample variety of soils, even poor, but prefers the sandy and draining ones, acidic to alkaline. It resists drought, but also to moderately humid soils, the saltness and very well the fire.

The most frequent ornamental use is that in mass as ground cover, possibly in association with other species, with preference for the specimens having green grey foliage.

In Florida, where it is extremely diffused, it has played an important role for the local populations as source of material for everyday objects, of food, the “heart of palm” (the vegetative apex) and of medicines, in particular the fruits, for various pathologies, in the first place for the ailments of the urinary tract, whose extracts in the modern times have had, and still have, a vast utilization in the official pharmacopoeia in the treatment of the benign prostatic hyperplasia and of the androgenetic alopecia. Paramount is the role the plant has for the survival of the fauna, to which grants food and shelter, it’s also the main source of nectar for the bees.

Historically, the Serenoa repens has been widely utilized by the Native Americans as food as well as for other uses. The Spanish conquerors in fact related that the “Indians” ate the fruits and, in spring, also the young plants. For the natives of Florida and of the nearby regions this plant was an important resource and quite versatile, furnishing food, medicine, oil and wax, textile fibres for fabrics or for making baskets and more, and as cover for the roofs of the dwellings. The archaelogists have found ancient artifacts of fibres of Serenoa repens even in northern zones of USA, such as New York state, thus demonstrating that already before the arrival of the Europeans a commercial exchange of this material was active.

From a nutritional point of view the fruits of the Serenoa repens were precious, as they furnished principles that were lacking in the diet of the natives, such as triglycerides and fatty acids. As medicinal, the American tribes did utilize this species as diuretic, sedative, anti-inflammatory, in the treatment of migraine, asthma, bronchitis, diarrhoea and for problems of diuresis, impotence and of male infertility. 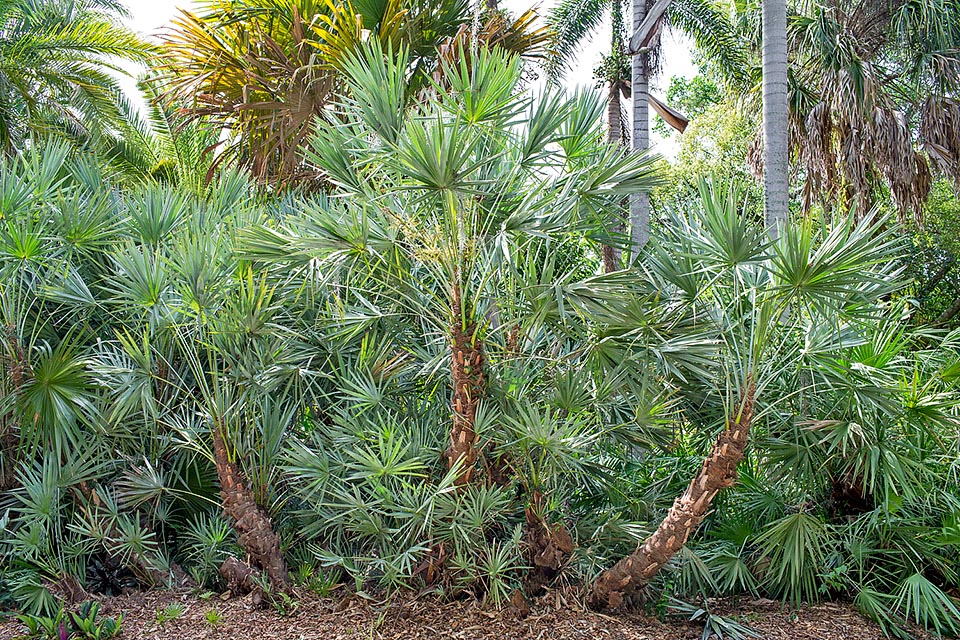 Historically the Serenoa repens has been amply utilized by the American natives as food, as textile fibre, for the oil, the wax and its numerous medicinal virtues © Giuseppe Mazza

In the modern western medical and herbalist practice the Serenoa repens has been introduced in the 1870s: H. W. Felter, for instance, American eclectic physician, in his “King”s American Dispensatory” in 1898, writes:

“… it’s sedative to the nerves, expectorant, tonic, beneficial for the digestive system …. its main action appears to be that on the reproductive organs”.

The prevailing uses, between late XIX century and early XX were staying in the treatment of the prostate hyperplasia, of the cystitis and of the gonorrhea. The interest in this plant had a further increase when positive effects were noted also on the livestock. The extracts of the fruit of the Serenoa repens, known also as Saw Palmetto, were included officially as food suplements in the USA Pharmacopoeia in the first decade of the XX century. During the years after the World War II the use of this plant has diffused also in Europe especially in the treatment of the benign prostatic hyperplasia, in the conviction that it presented a good relationship between therapeutic efficacy and unwanted side effects. 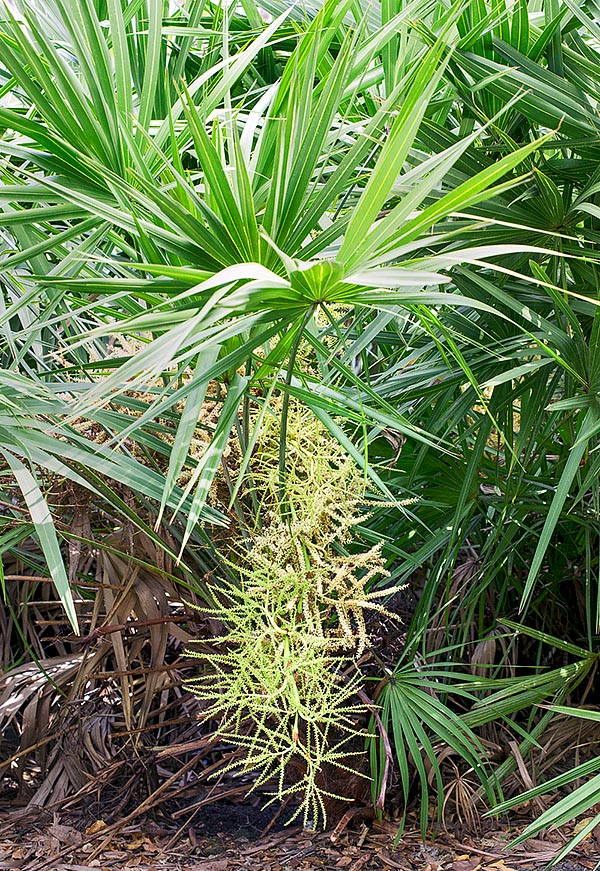 The vegetative apex and the 2-2,5 cm long fleshy fuits, are edible © Giuseppe Mazza

Nowadays, the extracts of the fruits of the Serenoa repens, used mainly against the benign prostatic hyperplasia and the baldness, represent in USA a market of more than 50 million of Dollars and their use is spreading more and more also in other regions.

In the recent years they have done numerous studies to verify the therapeutic efficacy of the extracts of Serenoa repens, in the various applications and the results are controversial. Whilst some studies on the benign prostatic hyperplasia describe moderate effects but however significant, with reduction of the urinary symptoms (such as, for instance, frequency of the urinations, complete emptying of the bladder and nycturia) and side effects scarce and lower than those of the reference medicines (finasteride), other analyses, even more recent and ampler, are not capable to prove any real effictiveness. It must be taken into account in the evaluation of these studies that the extract of this species is not a pure substance and consequently the various preparations might have a different effectiveness.

By some producers or herbalist it has been affirmed that the Serenoa repens should have a curative action on the prostate cancer but of this effect there is no feedback. Also the effects on baldness do not have any feedback from the clinical studies.

Considering however the promising effects evidenced by some researches on the prostatic hyperplasia we think that other studies are necessary, involving more patients and with tight controls, in order to be able to clarify definitively the real therapeutic value of these products. Currently anyway we cannot affirm with sufficient certainty that the extracts of this plant are effectice in the treatment of some pathology, the medical use of these products is not approved by the FDA (USA Food and Drug Administration) and it is recommended not to utilize them in lieu of more tested drugs. Furthermore, since the Serenoa repens is usually marketed under form of vetal extracts, prepared without standardized techniques, some products may have different effectiveness and above all different side effects due to the presence of contaminants.

Composition and mechanism of action

In the fruits of the Serenoa repens have been identified very many substances among which, besides numerous fat acids and lipids, is important to recall some phytosterols (vegetal molecules similar to the cholesterol) such as, for instance, the β-sitosterol. Fat acids and lipids are responsible especially of the nutritional and potentially antioxidant qualities attributed to the fruit of this palm, whilst the sitosterol develops a specific pharmacological role. This molecule is the main inhibitor of the enzyme 5-α-reductase, that has the function of transforming the testosterone hormone in a much more active derivative, the dihydrotestosterone. Seen that the prostate gland is physiologically stimulated by the dihydrotestosterone, the inhibition of the henzyme has the potential of reducing the enlargement (hyperplasia) of the gland. One of the most utilized drugs for the benign prostatic hyperplasia is the finasteride, synthetic molecule similar to the sitosterol of the Serenoa repens. Besides its effect on the enzyme 5-α-reductase the phytosterol after some authors might act interferring directly with the cellular receptor for the dihydrotestosterone. 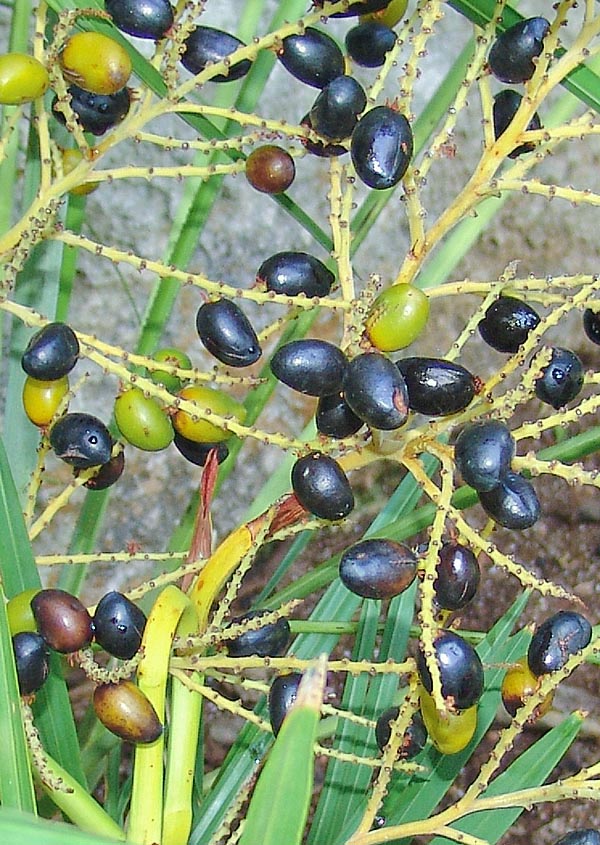 As the dihydrotestosterone has in our body numerous roles, the extract of Serenoa repens, inhibiting its production and perhaps interferring with its activity, could have numerous other effects, among which the most touted is that on the baldness or androgenetic alopecia. This common affection is rightly due to the fact that the enzyme 5-α-reductase, present in the piliferous bulb, produces abundant quantities of dihydrotestosterone, responsible of the fall of the hair. Serenoa repens, inhibiting the enzyme, might prevent the baldness, but the clinical studies have not confirmed this effect.

Despite the scarce proofs of their therapeutic effectiveness the extracts of the fruit of this palm are amply marketed, both for oral use and as lotions for the hairs. Also other among the quite numerous hypothetical beneficial effects attributed to the Serenoa repens, like those on the libido, on the erection or on the muscle development might find an explanation in the interference of the sistosterol with the functions of the testosterone. Besides the effects of the sitosterol it has been noted that the component in fat acids of the Serenoa repens is able to cause an inhibition of the contraction of the smooth muscle of the prostate and hence contributing to reduce the symptomatology of the prostatic hyperplasia.

The presence of high levels of sitosterol in the blood has been linked to an increase of the severity of heart pathologies in individuals that have already had heart attacks. Being the sitosterol an analogue of the sex steroid hormones it must not be taken by pregnant or breastfeeding women and its use may interfer with the effectiveness of the contraceptive pill.

Even if usually the extracts of Serenoa repens are well tolerated, unwanted side effects may arise among which we must recall, just as examples, the possibility of bleedings, nausea and vomiting or sexual problems and of allergic reactions. In any case, the consumption shoud be done only under medical control. Whilst in general the steroids of vegetal origin are not dangerous, persons affected by a rare genetic abnormality, the sitosterolemia, may be hypersensitive to these substances. Furthermore, as the sitosterol is a metabolic precursor of the steroid drug Boldenone that is utilized in zootechnics to stimulate the growth of the livestock but is also one of the most abused anabolizing steroid drugs in the sport doping, the consumption of Serenoa repens may render an athlete positive to tests for doping.

Theoretically, the assumption of extracts of Serenoa repens being inhibitors of the 5-α-reductase, could cause a decrease in blood levels of the PSA (prostate-specific antigen), diagnostic parametre for the prostate cancer and consequently might produce false negatives thus delaying the diagnosis of the cancer. After some studies, however, the Serenoa repens should be free from this effect.