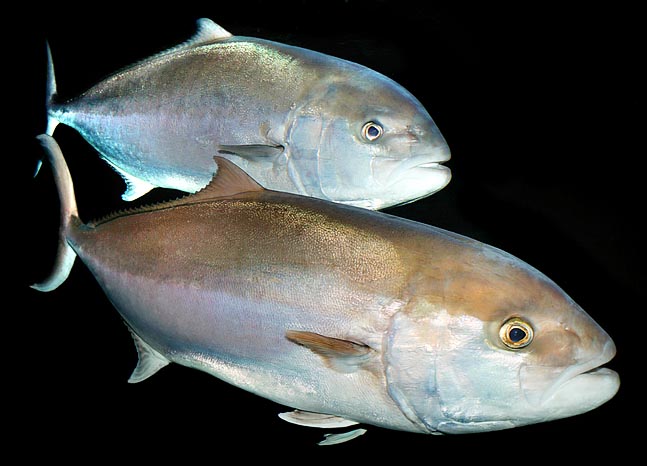 The Greater amberjack (Seriola dumerili Risso, 1810), belongs to the class of Actinopterygii, the ray-finned fishes, to the order of Perciformes and to the family of Carangidae.

The name of the genus comes from the Latin “seria” = barrel. Declining the name, a “seriola” should be a small barrel, and, actually, we are talking about the greatest carangid of the Mediterranean, which reaches the 2 m of length and even more than 50 kg of weight.

Present in the Mediterranean, but the Black Sea, it is a cosmopolitan fish. We find it, in fact, everywhere, in the temperate and tropical waters of the entire world.

Usually, it moves between the 20 and the 70 metres of depth, but it can swim also in surface and go down up to 360 m. When frequenting the reefs, like many fishes predating the herbivores, accumulates, a bit at a time, the phycotoxin coming from the Gambierdiscus toxicus, a dinoflagellate microalga living amongst the corals. The flesh of the biggest specimens can be, then, poisoned and therefore inedible, as it causes a serious intoxication known as ciguatera.

The body is elongated, fusiform but compressed on the sides; proportionally, the young specimens are taller. The skin is smooth, covered by tiny scales, and the mouth ample, as behoves to a predator. Numerous teeth, small and thin, are placed, in ample rows, on the jaws and inside the mouth, even on the tongue. 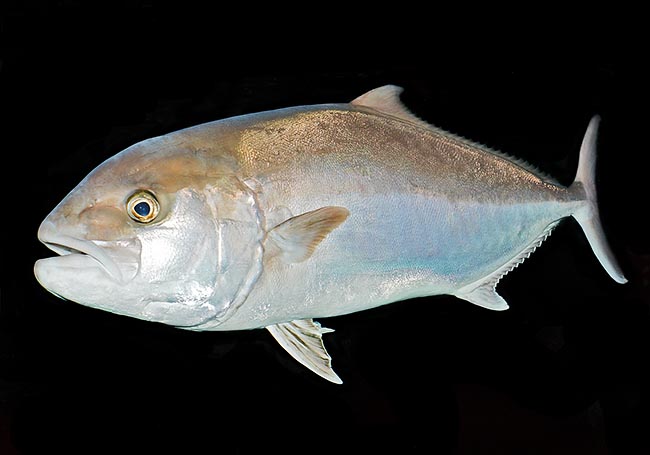 The pectoral fins are fairly short and spatulate, smaller than the ventral ones, which however do not slow down the proceeding of the fish, as they disappear, when folded, in a suitable cavity.

It seems that the amberjack may reach the 50 km/h and this obviously stimulates the sport fishermen who appreciate its strength and fighting spirit.

The back is grey with golden shades, the sides are paler and the belly is silvery-white.

The Seriola dumerili nourishes manly of fishes and squids it catches usually offshore, but which does not hesitate to follow up under the coastline.

The young live in crowded schools. The adults in small groups, but we can even see some stable pairs and some solitaries. In summer, in the Mediterranean, the mainly swim in surface, whilst in winter the seek shelter from the cold in depth. They get to the sexual maturity when around the 80-130 cm, when they weigh almost 10 kg. The reproduction, in the Mediterranean, occurs usually between May and July, in groups synchronized in the emission of the gametes and the ripening of the eggs. These ones, pelagic, are only 1,12 mm broad and develop in a couple of days. The newborns nourish immediately of plankton and have a very fast growth, typical also of the young.

In floating cages for the pisciculture, young 60-70 g amberjacks have reached, in five months, the 900 g! The first obstacle to the breeding stands in the fact that we have not yet been able to reproduce them in captivity: the newborns are to be looked for in the wild, and, furthermore, also the diet is not much simple, because a specific fodder doesn’t exist, and most of the food is formed by oily fishes and wastes from fishing. The vulnerability index of this species is of 54 over 100.