Serranus scriba is about 20-25 cm. Recognized prima-facie due to the lateral blue spots © Giuseppe Mazza

The Painted comber (Serranus scriba Linnaeus, 1758) belongs to the class of Actinopterygii, the ray-finned fishes, to the order of Perciformes and to the family of Serranidae.

The name of the genus comes from the Latin “serra” = saw, with reference to the saw-toothed dorsal fin, not to mention the various spines. The name of the species, “scriba”, means in Latin scribe, due to the bluish patterns on the head which seem ancient scriptures.

It is present in all the Mediterranean, Black Sea included, and on the eastern Atlantic coast, from the Gulf of Biscay to Mauritania, including the Azores, Madeira, Cape Verde and the Canary Islands.

It loves the solitary life along the rocky coasts, but frequents also the huge prairies of Posidonia (Posidonia oceanica). 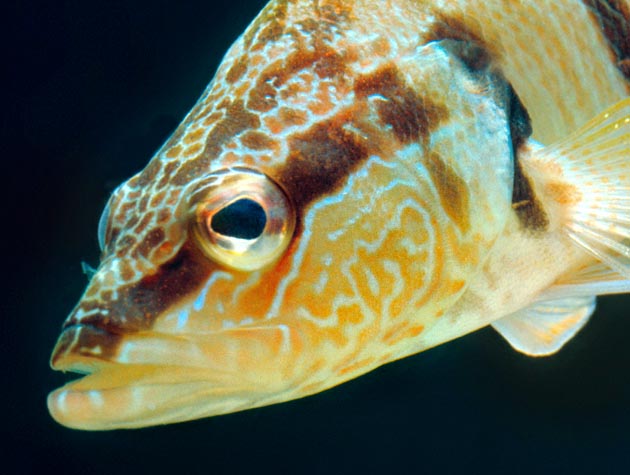 It is, usually, sedentary, in its small hunting territory placed between the 5 and the 30 m of depth, even if, while purchasing the preys, may descend further down.

It usually measures 20-25 cm, with a record of 36 cm, and is easily recognizable due to the showy, blue-violaceous, lateral and ventral spot, well visible in the adults, the six dark vertical bands, the yellow tail and the reddish head, pointed and decorated with the typical drawings.

The mouth, enormous, in respect to the size of the fish, is protractile, armed over and below with teeth of various length, bent back for better holding the preys.

The operculum has three spines, the preoperculum is jagged on the rear edge, and the only dorsal fin has 10 spiny rays, saw-toothed, and 14-16, unarmed.

The pectoral fins are spatulate and the tail, rounded in the juveniles, is just slightly convex in the adults. 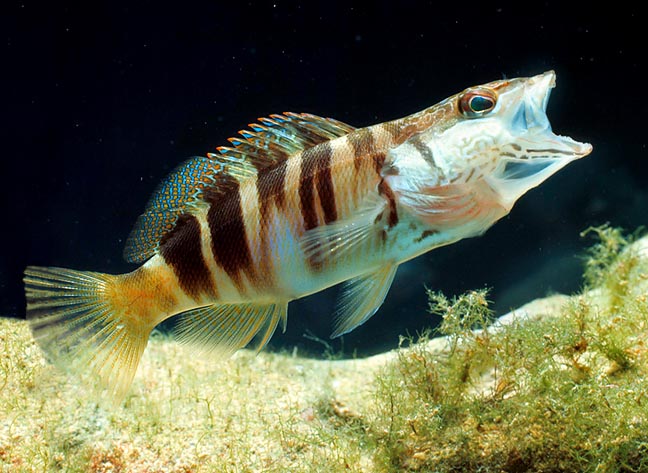 Hunts in ambush, sprinting on the preys with its huge and protractile mouth © Giuseppe Mazza

It keeps motionless, in a strategic point of its territory, which defends against its congeneric intruders, and attacks the passing ill-fated with unbelievable sprints.

They are mostly small fishes and young cephalopods, forming the main course of its diet, but it does not disdain crustaceans and small worms.

It is a hermaphroditic species. The eggs and the sperm ripe at the same time and the self-fecundation would be, theoretically, possible.

The reproductive period falls between late spring and early summer.

Every adult specimen may spawn up to 100.000 pelagic eggs and also the larvae are entrusted to the sea.

The Serranus scriba has a life expectancy of 16 years, and reproduces starting from the fourth year of life, when it reaches the 18 cm. The vulnerability index of this species is of 38 over 100.