Shells : mathematical formulas for the look and the drawings

Shells may take the most incredibile shapes, with an infinite range of colours. Their patterns follow mathematical formulas. 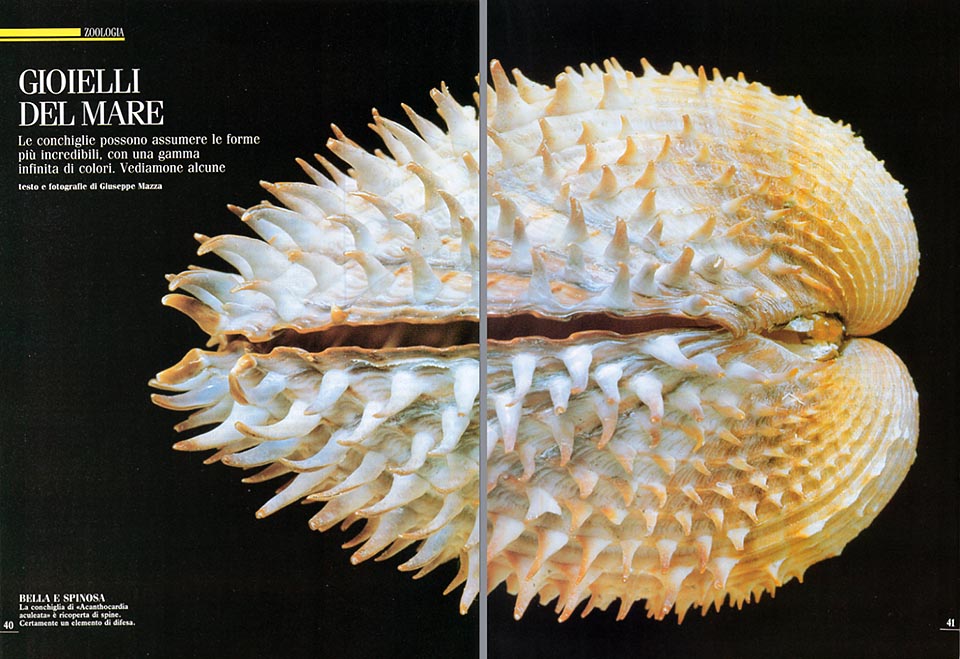 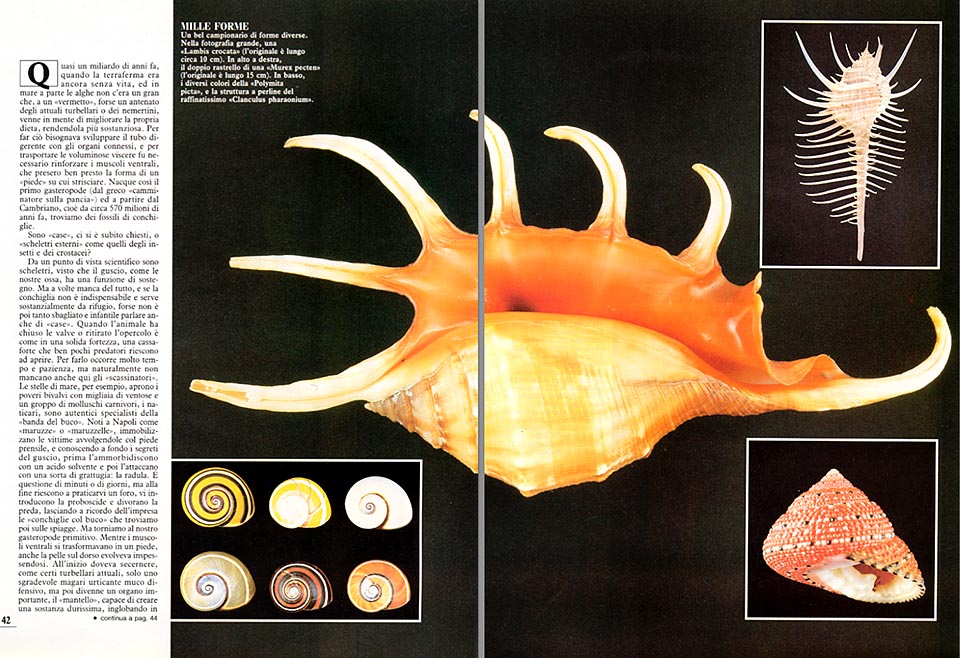 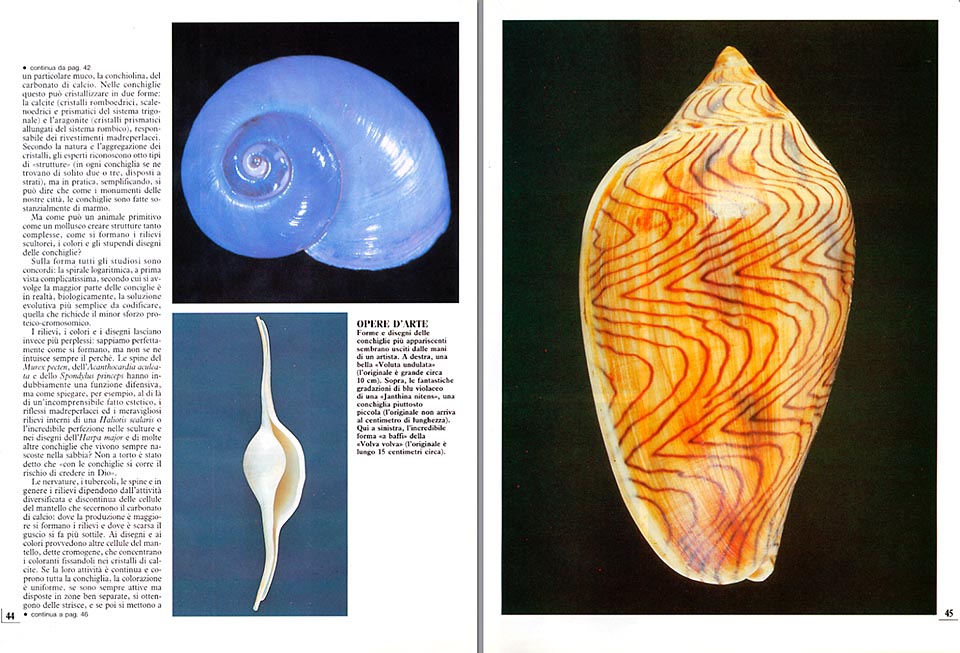 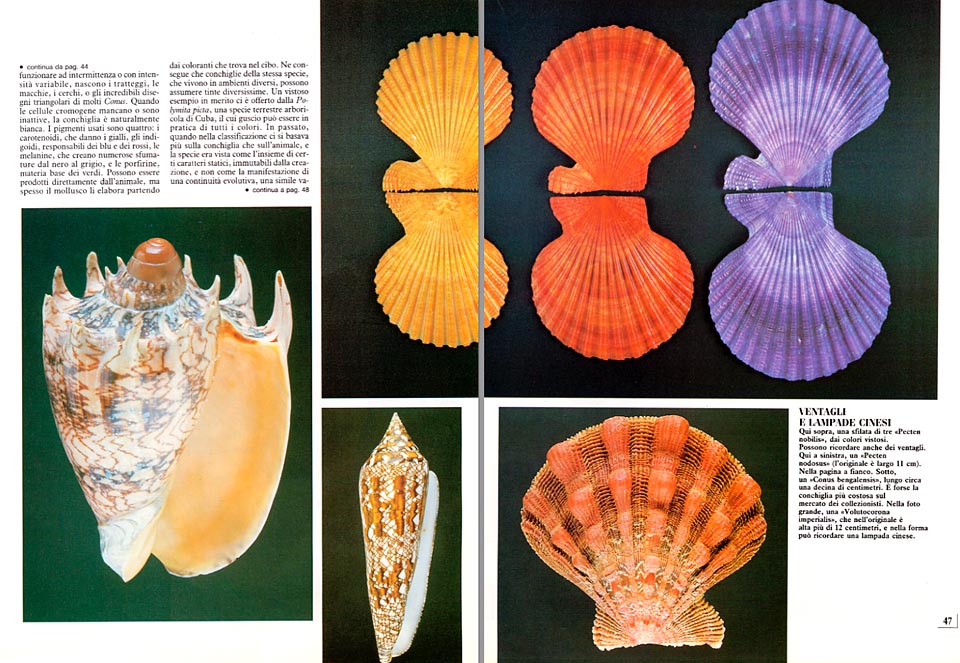 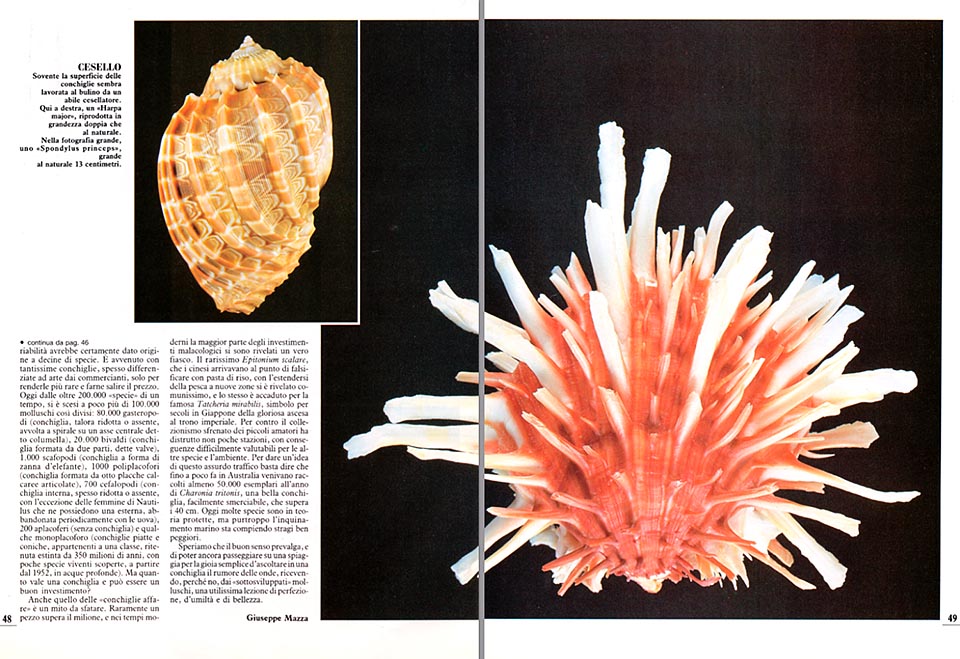 Almost a billion of years ago, when the dry land was still without life, and in the sea, but algae, there was not much, a “small worm”, perhaps an ancestor of present turbellarians, or of the nemertians, had the idea of improving its own diet, rendering the same more nourishing.

To do so, it was necessary to develop the digestive duct with connected organs, and for carrying the ponderous entrails, it became necessary to strengthen the ventral muscles, which soon assumed the shape of a “foot”, on which to crawl.

The first gasteropod (from Greek “walker on the belly”), was born in this way, and, since the Cambrian, that is from about 570 millions of years ago, we find fossils and shells. Are they “houses”, we asked to ourselves, or “outer skeletons”, like those of insects and crustaceans?

From a scientific point of view, they are skeletons, seen that the cover, like our bones, has a supporting function. But sometimes it’s completely missing, and if the shell is not indispensable and acts substantially as a shelter, then, perhaps, it is not so much wrong and childish, to talk also about “houses”.

When the animal has closed the valves, or drawn back the operculum, it is like a solid fortress, a safe which very few predators can open.

To do so, much time and patience are required, but also here, of course, the house-breakers do not miss. Star-fishes, for instance, open the poor bivalves with thousands of suckers, and a group of carnivorous molluscs, the naticaria, are genuine specialists of the “hole gang”.

Known in Naples as “maruzze”, or “maruzzelle”, they immobilize the victims, surrounding them with their prehensile foot, and being thoroughly acquainted with the secrets of the cover, at first, they soften the same with a dissolving acid, and then, they attack it with a kind of grater: the radula. It’s matter of minutes or days, but, after all, they succeed in making a hole in the cover, they introduce there the proboscis and eat the prey, leaving, as memory of the deed, the “holed shells”, which we then find in the beaches.

But, let us go back to our primitive gasteropod.

While ventral muscles were transforming in a foot, also the skin of the back was evolving, getting thicker. At the beginning, it was probably secreting, like some current turbellarians, only an unpleasant, maybe stinging, defensive mucus, but later, this became an important organ, the “mantle”, able to create a very hard substance, blending in a special mucus, the conchiolin, some calcium carbonate.

Depending on the nature and the aggregation of the crystals, the specialists identify eight types of “structures” (in every shell usually two or three of them are found, disposed in strata), but practically, simplifying, we can say that, like the monuments in our cities, shells are done substantially of marble.

But, how can a primitive animal like a mollusc create so much complex structures, how do they form the sculptural relief, the colours and the wonderful drawings of shells?

All scholars agree about the shape: the logarithmic spiral, very complicated at first sight, according to which the major part of shells wind up, is really, biologically, the evolutional solution most simple to be codified, the one which requires the minor protein chromosome effort.

Relief, colours and drawings are, on the contrary, more puzzling: we know exactly how they take shape, but we are unable to understand always the reason.

The thorns of the Murex pecten, the Acanthocardia aculeata, and the Spondylus crassisquama, have without any doubt a defensive function, but can we explain, for instance, beyond and incomprehensible aestethical fact, the nacreous reflects and the wonderful internal relief of a Haliotis scalaris, or the incredible perfection in the sculptures and drawings of the Harpa major and of many other shells which we always live hidden into the sand? Rightly, they say that “through the shells, you run the risk to believe in God”.

The ribbing, the tubercles, the thorns, and, in general, the relief, depend from the diversified and discontinuous activity of the cells of the mantle which secrete the calcium carbonate: where the production is bigger, the relief appear, where it’s poor, the shell is thinner. Other cells of the mantle, called chromogens, which concentrate the colouring fixing them in the calcite crystals, take care of the drawings and the colours.

If their activity is continuous,and they cover the whole shell, the colouring is even, if they are always active, but placed in well separated areas, we get some stripes, and, finally, if they operate with intermittency, or with inconstant intensity, then we get outlines, dots, circles, or the incredible triangular drawings of many Conus.

When chromogen cells are missing or are inactive, the shell is, of course, white. Pigments used are four: the carotenoids, which give the yellow, the indigoids, responsible for blue and red, the melanin, which create several shadings, from black to grey, and the porphyrins, basis for the green.

They can be produced directly by the animal, but often the mollusc develops them starting from the colourings found in the food. Consequently, same species of shells, but living in different habitats, can assume quite different colours.

A showy example of this, is given by the Polymita picta, a terrestrial arboreous Cuban species, the shell of which can be practically of all colours.

In the past, when the classification was based more on the shell than on the animal, and the species were seen as the total result of some static characters, unchangeable since the time of creation, and not as the manifestation of an evolution continuity, such a variability would have certainly given origin to tens of species.

It has happened that many shells, often expressly were differentiated by dealers, with the only aim to render them uncommon and rise the costs. Nowadays, from the more than 200.000 “species” of time ago, we have come down to a little more of 100.000 molluscs so distributed: 80.000 gasteropods (shell sometimes reduced or absent, wound as a spiral on a central axis, called columella), 20.000 bivalves (shell formed by two parts, called valves), 1.000 tusk shells (shell with the shape of an elephant tusk), 1.000 chitons (shell formed by eight articulated calcareous plates), 700 cephalopods (inner shell, often reduced or absent, but females of Nauptilus, which have an external one, periodically abandoned with the eggs), 200 Aplacophora (without shell), and some Monoplacophora (shells flat and conical, belonging to a class, deemed extinct sonce 350 millions of years, of which a few living species, were discovered, since 1952, in deep waters).

But, what is the price of a shell, and, can it be a good investment?

Also the idea that shells are good business, is a legend to be discredited.

Very seldom a specimen can be worthy more of 50.000 Euros, and in the modern times, the most of investments in malacology have shown to be a real fiasco.

The very rare Epitonium scalare, which Chinese were falsifying with rice paste, with the extension of fishery in new areas, has become very common, and the same thing has hapepned for the famous Tatcheria mirabilis, symbol for centuries of the glorious ascent to the imperial throne.

On the contrary, the unrestrained collecting of minor amateurs has destroyed several stations, with consequences difficult to be evaluated for the other species and the habitat.

In order to give an idea of this absurd trade, it is sufficient to say that till recent times, in Australia, were collected at least 50.000 specimen per year, of Charonia tritonis, a nice shell measuring more than 40 cm, easily marketable.

Nowadays, many species are theoretically protected, but the marine pollution is making much worse slaughters. We hope that the common sense will prevail, and we hope to be still able to walk along a beach, with the simple pleasure to hear the noise of the waves in a shell, receiving, why not, from the “undeveloped” molluscs, a lesson of perfection, humility and beauty.

Shells : mathematical formulas for the look and the drawings was last modified: June 10th, 2019 by Giuseppe Mazza