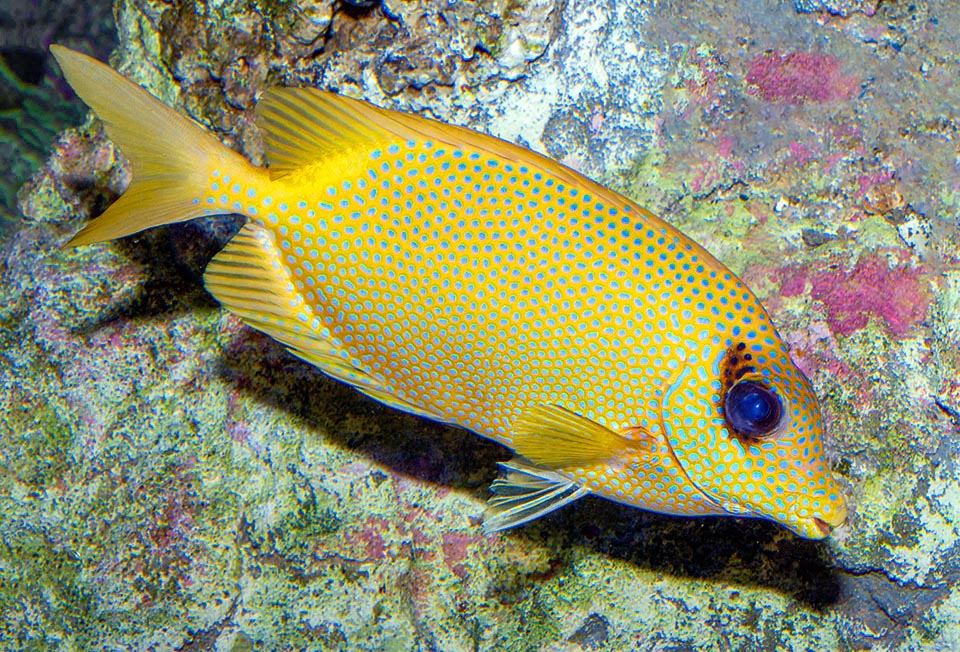 Siganus corallinus is a rabbitfish, so called for the head profile with prominent lips and the tiny interlocking teeth, built to sever algae and aquatic plants © Giuseppe Mazza

Siganus corallinus (Valenciennes, 1835) belongs to the class of the Actinopterygii, the ray-finned fishes, to the order of the Perciformes and to the family of Siganidae, having only one genus, Siganus, and about thirty species.

These are the so-called rabbitfishes, due to the profile of their head with protruding lips and small interlocking teeth, made to sever the algae and the aquatic plants in the seagrass meadows. These are marine fishes are mainly herbivorous that at times venture for short distances in the brackish waters of the river’s mouths.

The etymology of the genus Siganus gets its origin from the Arabic term “sidjan”, assigned by Forsskål in 1775 to the Siganus rivulatus.

The specific name of the genus corallinus, of the corals in Latin, refers to the madreporic environment where it lives. 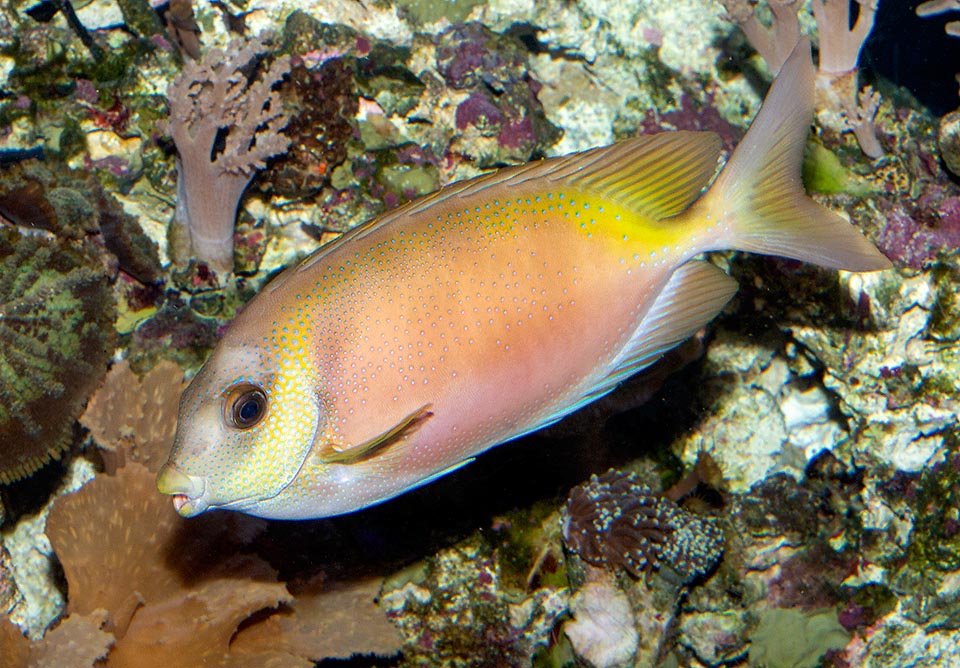 The various populations have often, geographically, very different liveries, so much that some talk of new species or subspecies © Giuseppe Mazza

The Siganus corallinus has a very vast diffusion in the Indian Ocean and in western Pacific. Indicatively, starting from the Seychelles, we find it in the Maldives, along the Indian coasts and then, eastwards, in the Andaman and Nicobar Islands, Thailand, Malaysia, Indonesia, Australia, Papua New Guinea, Micronesia, Solomon Islands, Vanuatu and New Caledonia that marks the southern limit of the species. Northwards, after the Philippines, it reaches the southern Japanese coast.

It is a diurnal fish mainly present in shallow waters, from 3 to 25 m of depth, in lagoons full of corals, often sheltered by madreporic formations of the genus Acropora that grant secure hideouts among their tables and their prickly ramifications. Sites where to disappear quickly at the sight of the predators and where to spend peaceful nights. 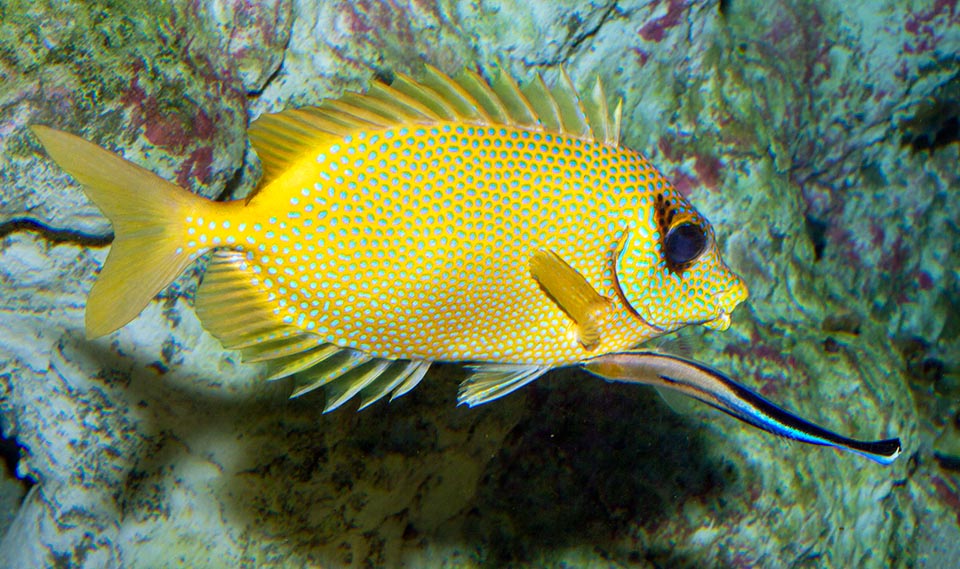 In this stretched fins specimen, cleaned by a Labroides dimidiatus, are well visible the spiny rays linked to the venomous glands © Giuseppe Mazza

The juveniles prefer the prairies of phanerogams where they move in small schools, often mixed with those of the Scaridae, the so-called parrotfishes, whilst the adults tend to isolate themselves in pairs among the madrepores and to graze on benthic algae.

The livery, characteristic to the species, is yellow with blue ocelli. More intense spots on the head where they merge in small traits and become almost black around the eye whilst the yellow colour darkens creating a dark zone, more or less triangular, that masks its outline. 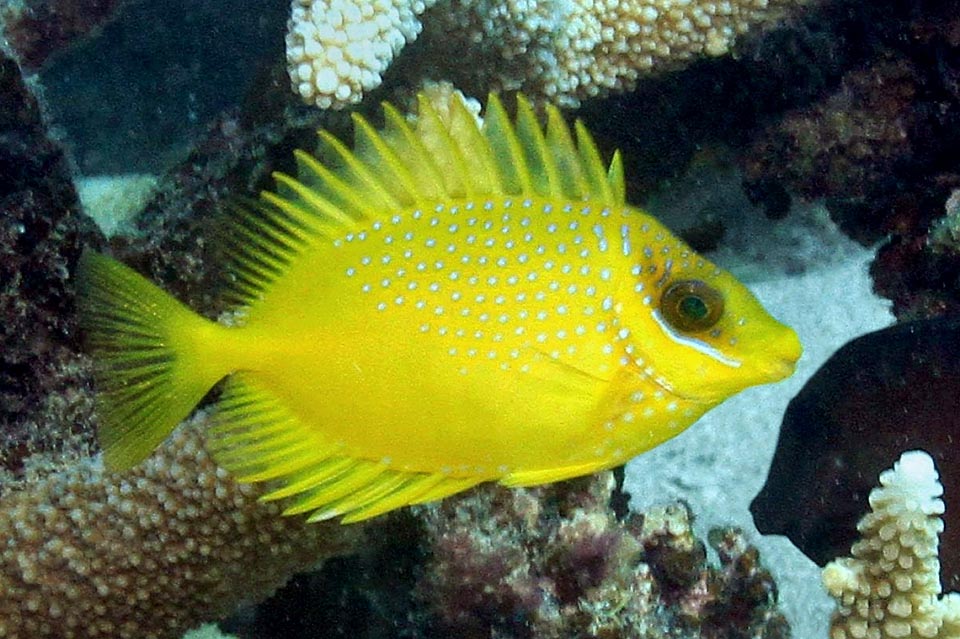 Juveniles may show vertical blue stripes on the sides that will form, breaking, the typical dotting of the species © Graham Edgar, Reef Life Survey

Remarkable variants of colour do exist depending on the zones, so much to induce some ichthyologists to talk, on geographical basis, of 2 or 3 possible species or subspecies, presently considered as synonyms. In any case, during the night, the colours fade replaced by a brown camouflaging pyjamas which is less conspicuous.

The Siganus corallinus, nourishes for the 60% of vegetables, phytoplankton, algae and aquatic plants, and for the rest, of zooplankton and of some benthic invertebrates.

The reproduction, seemingly related to the water temperature and to the lunar cycles, occurs by the sunset. The larvae are planktonic as well as the post-larval stage lasting long enough with transparent pelagic forms without scales. They nourish of the plankton in relatively deep waters, to settle then, growing, on the coastal bottoms and assuming, while colouring, the juvenile form. 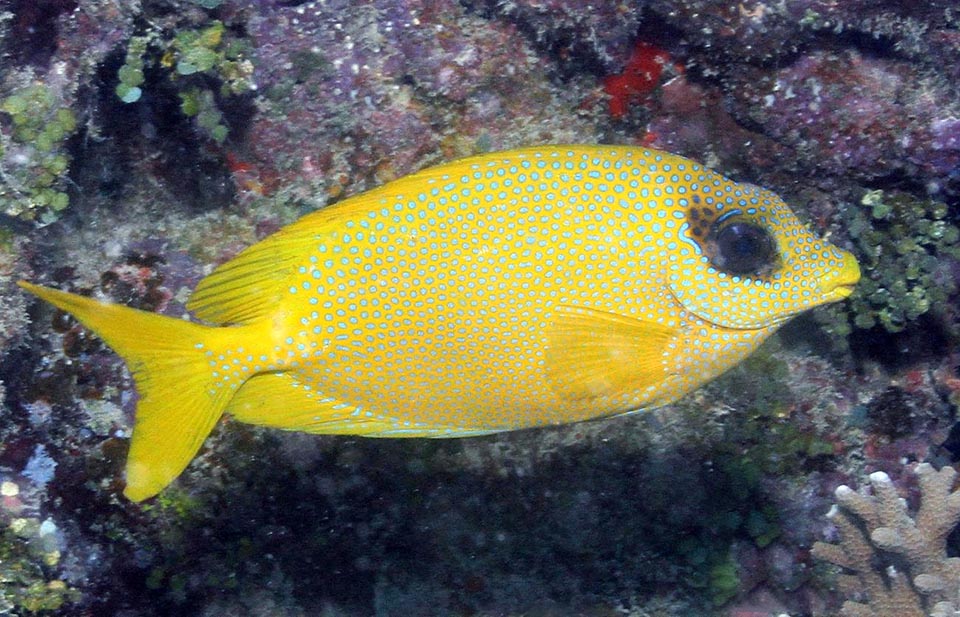 Siganus corallinus can be 35 cm long and at times appears in local fish markets, but the flesh may aver poisonous or hallucinogenic © Graham Edgar, Reef Life Survey

When they reach the 5 cm, they are yellow small fishes with eventual vertical blue stripes on both sides that will form, when breaking, the dotting typical of the species.

The Siganus corallinus is locally fished for feeding purposes, but its flesh may be poisonous or hallucinogenic.

The resilience of the species is good, with a possible doubling of the populations decimated by the events in less than 15 months. The vulnerability index, moderate, is nowadays marking, in 2020, only 27 on a scale of 100.

Siganus corallinus was last modified: May 3rd, 2022 by Peppino