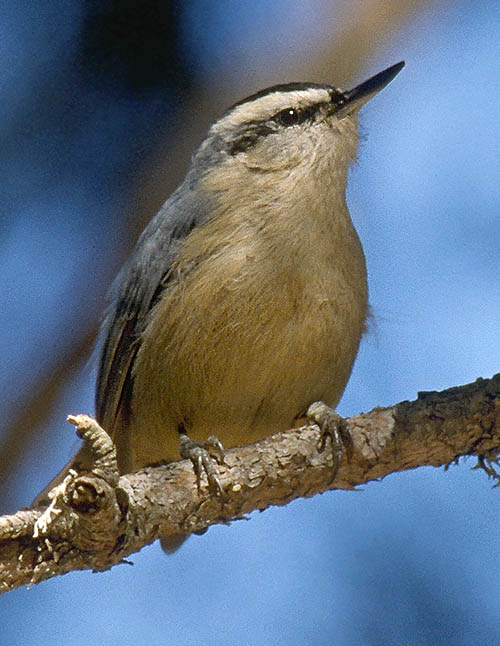 The Corsican Nuthatch (Sitta whiteheadi Sharpe, 1884) is a bird belonging to the subclass of the (Neornithes), order of the Passerines (Passeriformes), and family of the Sittids (Sittidae).

This bird, discovered in Corsica in 1883-84 by John Whitehead, belongs to the group of the nuthatches of pan-Mediterranean origin, formed, besides the Corsican Nuthatch, by the Krüper’s Nuthatch (Sitta krueperi), distributed in south-eastern Europe and in south-western Asia and by the Algerian Nuthatch (Sitta ledanti), species endemic to mountains of northern Algeria, discovered surprisingly in 1975 only on the Djebel Babor. The members of this family have modest size, squat and massive body structure, short tail, soft plumage, rather big and a little flattened head, powerful and straight bill. The robust legs and the curved nails allow these climbers any kind of displacement along trunks and branches and, for some species, on the rocky and wall surfaces. They come down to earth infrequently, and when there, they move hopping. The flight is undulating and usually developed on short distances.

It is a species endemic to Corsica, where it lives exclusively on the main mountain ranges, with a distribution similar to that of the Laricio pine (Pinus nigra laricio), arboreal species diffused from the Tartagine Forest northwards to the one of the Hospital in the extreme south, besides on the Cagna mountains. This sittid is strictly sedentary and, even if manifesting a marked territoriality also outside the reproductive period, it can perform vertical displacements in winter towards the valley floors, at times reaching the costal zones of the island. The most mobile individuals are the juveniles and the non-paired specimens. The global population of the Corsican Nuthatch has been assessed in about 2000 pairs, whose survival is linked to that of a forest management not foreseeing the fragmentation of the habitat and the felling of the dead and rotting trees, however already threatened by the fires and by the natural action of the avalanches. The overall forest surface of the Laricio pine might reduce in relation to the climate warming.

For what concerns the reproduction, the Corsican Nuthatch is strictly related to the mountain forests of Laricio pine (Pinus nigra laricio), especially to the open sectors rich of ripe trees and of still standing dead or rotting trunks. The greatest densities of pairs are remarked between the 1000 and the 1600 m (with maximum peaks between the 1100 and 1500 m), whilst lower densities are found below, in woods mixed of Laricio pine, Silver fir and Beech or in tall trees forests of Maritime pine at altitudes of 750-1000 m. 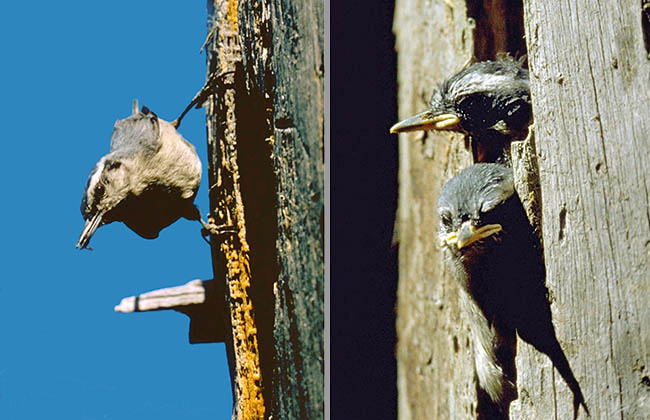 Male with beakful at the nest entry and waiting chicks right. A young male on top © Pierandrea Brichetti

In the forests in their natural state with remarkable presence of dead trunks, between the 1100-1500 m of altitude, the Corsican Nuthatch reaches an average density of 1,13 pairs per 10 hectares (with peaks of 1,5 pairs in the optimal sectors), whilst at lower altitudes, where the Laricio pine associates with the Beech or the Maritime pine, the average density decreases significantly to 0,24 pairs per 10 hectares.

Small, it reaches the 12 cm of length, with a wingspan of 21-22 cm and a weight of 12-14 g. The sexual liveries are little differentiated; the seasonal ones are substantially similar. The male is recognizable by the showy white supercilium contrasting with the black of the crown, this last one being dark grey in the female. The lower parts are white-fawn, the upper ones greyish-bluish; the tail has black rectrices with white apex.

The most characteristic and distinctive vocalizations may be identified with a strong and prolonged trill, formed by a rapid sequence of about 15 notes per second, whilst in the moments of excitement, it emits harsher and more nasal calls. The feeding is vegetal in winter (Laricio pine seeds) and animal in the good season (insects and spiders). The food is sought in the manner of the tits (Paridae) between the bark of the trunks and the tufts of pine needles, especially the Laricio pine ones.

It builds up a nest between mid-April and the first decade of May in the cavity of a tree, often utilizing an old hole of Great spotted woodpecker which, paradoxically, is also one of the most fearsome predators of eggs and of nestlings.

Comparison male/female. In this last, on the right, the colour of the crown is almost similar to the back’s one © Pierandrea Brichetti

Normally, the nests are placed in dried or rotting trunks of Laricio pine, at an average height of 10 m from the soil, with extremes of 1,6 and 26 m. The base of the nest is formed by pine needles and wood shavings, whilst the inside of the nest is covered by feathers and hairs. Usually, 5-6 white eggs finely spotted of brown-rust are spawned, and the female cares their incubation. The juveniles become capable to fly when 22-24 days old. Unlike the Eurasian Nuthatch (Sitta europaea) it does not restrict the entry hole of the nest with the mud. Territorial all over the year, in winter, for the search of food, it often associates with other species, such as the Coal tit (Parus ater). The nesting territory usually extends for 7-10 hectares, even if most of the food searching activity happens in a central area of 4-6 hectares. The average distance found between active nests is of 290 m, with extremes of 210 and 390 m.

Dead and rotting Laricio pine trunks typologies used for building the nest (shown by an arrow). The most utilized types are the first three from left. In the right photo, on top, we note the entry hole of a nest and the hole done by the Great Spotted Woodpecker for predating the nestlings © Pierandrea Brichetti