Solanaceae : the family of potatoes and tomatoes

Tomatoes, potatoes & Company. Besides these well known edible species, the family of Solanaceae includes many plants of great medicinal and ornamental value. 3000 species spread all over the world. 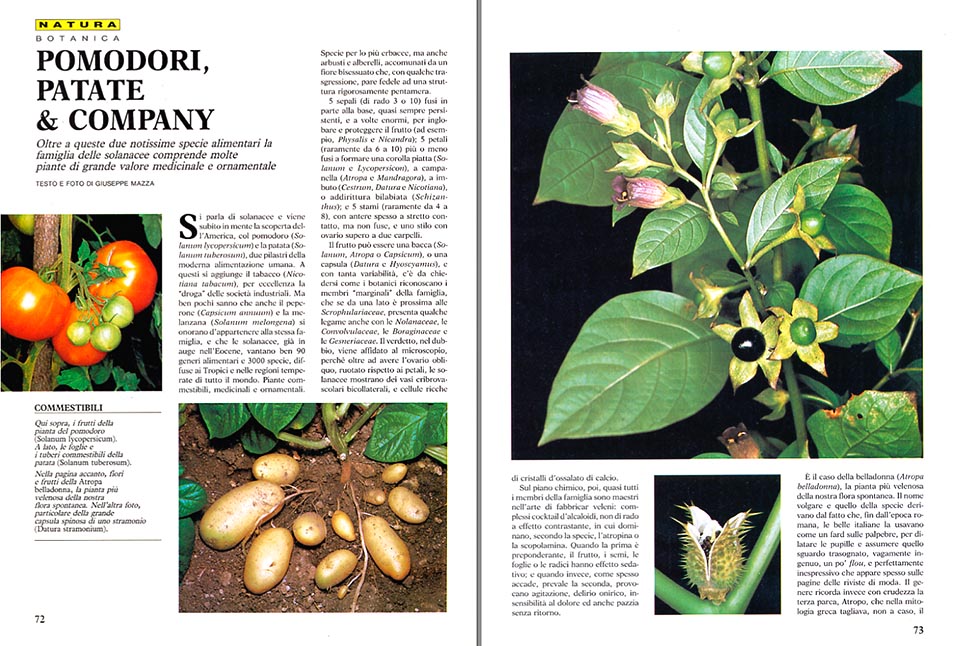 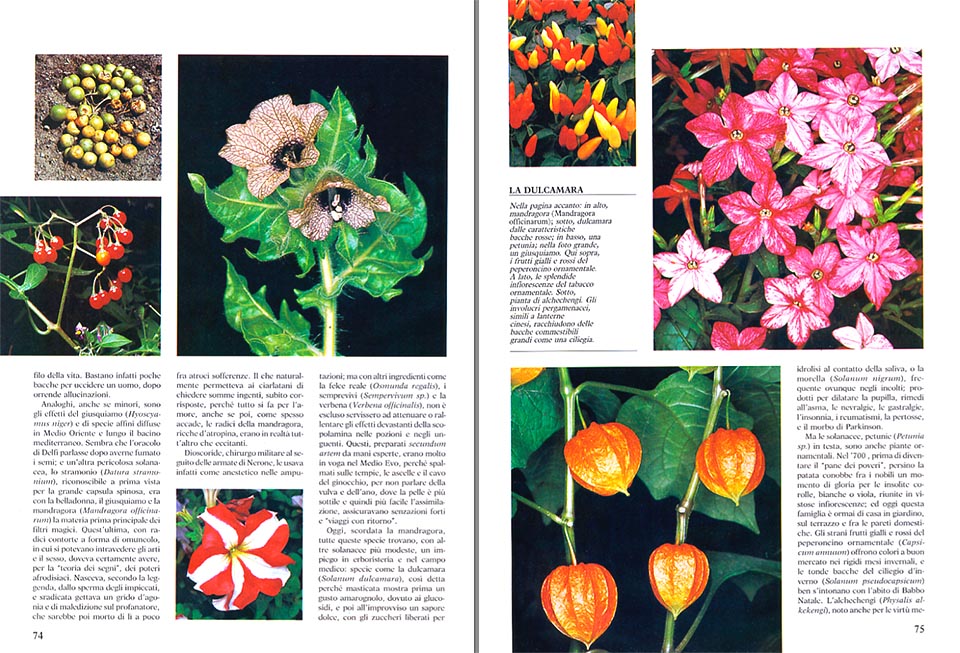 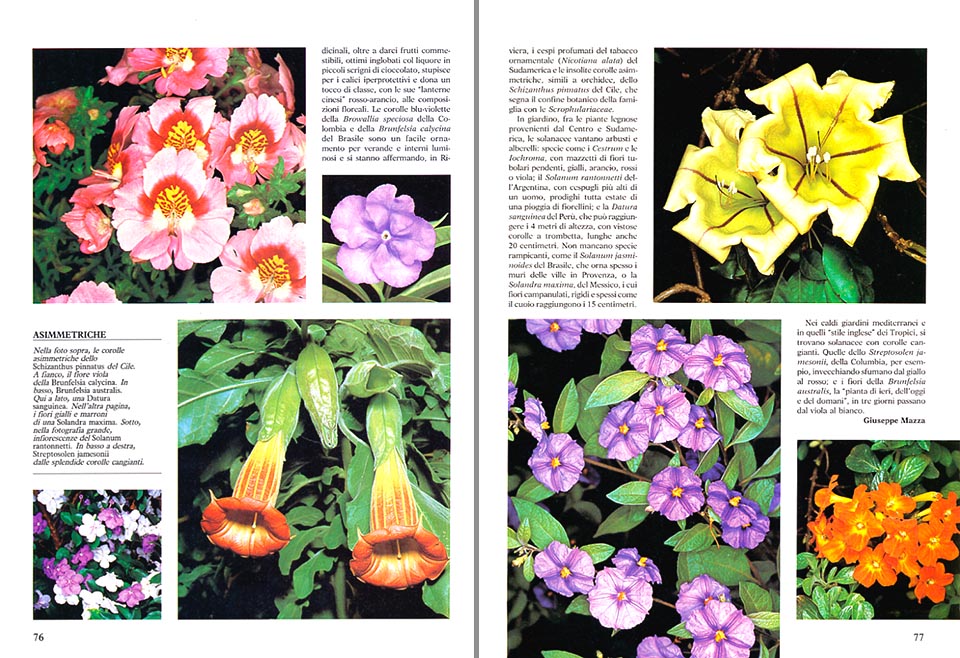 We talk of Solanaceae, and we think at once to the discovery of America, with the Tomato (Lycopersicon lycopersicum), and the Potato (Solanum tuberosum), two pillars of the modern human alimentation.

To these, we have to add the Tobacco (Nicotiana tabaccum), the “drug” par excellence of the industrial societies: 4 millions of Tons of leaves per year, equivalent to 3.000 billions of cigarettes (an average of 800 per inhabitant!), and 25 billions of cigars.

A trade shamefully tolerated by the authorities, seen the cancerous effects, and the damages of the nicotine, which accelerates the cardiac rhythm contracting dangerously, at the same time, the blood vessels.

But very few know that also the Guinea pepper (Capsicum annuum), and the Eggplant (Solanum melongena), are proud to belong to the same family, and that the Solanaceae, already enjoying of great favour in the Eocene, boast rightly 90 genera and 3.000 species spread in the Tropics ans the temperate regions of all the world.

Edible, medicinal and ornamental plants. Species herbaceous, mostly, but also shrubs and saplings, united by a bi-sexual flower, which, with few infringements, seems faithful to a strictly pentamerous structure.

Five sepals (seldom 3 or 10), united partly at the base, almost always persistent, and sometimes enormous, for conglobating and protecting the fruit (e.g. Physalis and Nicandra); 5 petals (seldom from 6 to 10), more or less united to form a flat corolla (e.g. Solanum and Lycopersicon), bell-like (e.g. Atropa and Mandragora), funnel-like (e.g. Cestrum, Datura and Nicotiana), or even-bilabiate (e.g. Schizanthus); and five stamens (seldom, from 4 to 8), with anthers often in close contact, but not united, and one style with a two carpels ovary in excess.

The fruit can be a berry (e.g. Solanum, Atropa, or Capsicum), or a capsule (e.g. Datura and Hyoscyamus), and, with such a variability, we can well ask ourselves, how botanists can manage to recognize the “marginal” members of the family, which, if from one side, is close to the Scrophulariaceae, it presents also some ties with the Nolanaceae, the Convolvulaceae, the Boraginaceae, and the Gesneriaceae.

The verdict, in the doubt, is entrusted to the microscope, because, besides having the ovary oblique, rotated in comparison to the petals, the Solanaceae show always bicollateral vascular bundles, and cells rich of crystals of calcium oxalate.

On the chemical side, furthermore, almost all the members of the family are masters in the art of fabricating poisons: complex cocktails of alkaloids, frequently with contrasting effect, where prevail, depending on the species, the atropine or the scopolamine.

When the first is predominating, the fruit, the seeds and the leaves have a sedative action; and when, on the contrary, as it happens often, the second prevails, they cause agitation, oneiric delirium, insensitivity to the pain, and even irreversible madness.

This is the case of the Deadly nightshade (Atropa belladonna), the most poisonous plant of our spontaneous flora.

The vulgar name and of the species, come from the fact that since the Roman era, the beautiful Italian ladies used it as a “fard”, on the eyelids, to dilate the pupils and assume that dreamy look, vaguely ingenuous, rather blurred, and perfectly expressionless, which often appears on the glossy pages of the fashion magazines.

The genus, recalls, with harshness, on the contrary, the Parcae Atropos, who, in the Greek mythology, was cutting, not by chance, the breath of life. In fact, few berries are sufficient to kill a man, after horrible hallucinations.

Similar, even if lesser, are the effects of the Stinking nightshade (Hyoscyamus niger), and of like species spread in Middle East and along the Mediterranean basin. It seems that the Delphic horacle, was talking, after having smoked its seeds; a,d another dangerous solanacea, the Jimson weed (Datura stramonium), recognizable at first sight for its great thorny capsule, was, along with the Deadly nightshade, the Stinking nightshade and the Mandrake (Mandragora officinarum), the main raw material of the magic philtres.

The last one, with roots twisted with the form of homunculus, in which they could see, indistinctly, the limbs and the sex, had by sure, after the “theory of the signs”, aphrodisiac properties.

It was coming to life, after the legend, from the semen of the hanged men, and, when uprooted, emitted a shout of agony and of curse on the violator, who would later on die, quickly, with terrible sufferings. And this, of course, was allowing the quacks to ask for the same, huge amounts of money, immediately paid, as everything can be done for love, even if, at last, the roots of the Mandrake, rich of atropine, were, as a matter of fact, not at all exciting.

Pedanius Dioscorides, military surgeon in Nero’s army, was using them, in fact, as anaesthetic in the amputations; but with other ingredients, suwh as the Rotal fern (Osmunda regalis), the Liveforever (Sempervivum spp.), and the Common vervain (Verbena officinalis), we can well think they might be used for mitigating or slowing down the ravaging effects of the scopolamine in the potions and the ointments.

These ones, prepared “secundum artem”, by skilled hands, very much in fashion during the Middle Age, as, smeared on the temples, the armpits, the cavity of the knee, not to talk of the vulva and the anus, where the skin is thinner, and therefore the assimilation is easier, were assuring strong sensations and “voyages with return”.

Nowadays, forgotten the Mandrake, all these species find, with other more modest Solanaceae, use in herbalism and in the medical field.

Species such as the Bittersweet (Solanum dulcamara), so called because, when chewed, releases, at the beginning, a bitterish taste, due to the glucosides, and later, suddenly, a sweet taste, with the sugars freed by hydrolysis when in contact with the saliva, or the Black nightshade (Solanum nigrum), common everywhere, in the not tilled grounds.

Products for dilating the pupil, remedies against asthma, the neuralgias, the gastralgia, the insomnia, the rheumatisms, whooping-cough, and the Parkinson disease.

But the Solanaceae, Petunias (Petunia spp.), first, are also ornamental plants. In the eighteenth century, before becoming the “bread of the poor”, even the Potato knew, between the nobles, a moment of glory, for the unusual corollas, white or violet, united in showy inflorescences; and now this family is at this point familiar in the garden, on the balcony, and between the domestic walls.

The odd yellow and red fruits of the Ornamental pepper (Capsicum annuum), offer low-cost colours during the severe winter months, and the round berries of the Jerusalem cherry (Solanum pseudocapsicum), well match with the suit of Santa Claus.

The Bladder cherry (Physalis alkekengi), known also for the medicinal virtues, besides giving us edible fruits, very good when put with the liqueur in small chocolate containers, astonishes for its over-protective calyces, and offers a touch of class, with its red-orange “Chinese lanterns”, to the floral compositions.

The blue-violet corollas of the Browallia speciosa of Colombia and of the Brunfelsia calycina of Brazil, are an easy ornament for verandas and luminous interiors, and are getting popular, in the Riviera, the great perfumed tufts of the Winged tobacco (Nicotiana alata), of South America, and the unusual asymmetrical corollas, similar to orchids, of the Schizanthus pinnatus, of Chili, which marks the botanical boundary of the family with the Scrophulariaceae<\/strong>.

In the garden, between the woody plants coming from Central and South America, the Solanaceae boast shrubs and saplings.

Species like the Cestrum and the Iochroma, with small bunches of tubular, pendulous flowers, yellow orange, red, or violet; the Solanum rantonnetti, of Argentina, with bushes taller than a man, prodigal of a rain of small flowers during the whole summer; and the Datura sanguinea, of Peru, which can reach the four metres, with showy trumpet-like corollas, long even 20 cm.

The climbing species are not missing, like the Solanum jasminoides, of Brazil, which often embellishes the walls of the Provence villas, or the Solandra maxima, of Mexico, with campanulate flowers, rigid and as thick as the leather, reaching the 15 cm.

In the warm Mediterranean gardens, and especially in the tropical “English style” ones, we can find even Solanaceae with changing corollas.

Those of the Streptosolen jamesonii, of Columbia, gradate, while ageing, for instance, from the yellow to the red; and the flowers of the Brunfelsia australis, the “Plant of yesterday, today and tomorrow”, pass, very easily, in three days, from the violet to the white.

Solanaceae : the family of potatoes and tomatoes was last modified: January 24th, 2021 by Giuseppe Mazza