The penguins that live in a warm climate. Who says they only like the ice ? To refute the cliché, these penguins live in South Africa. 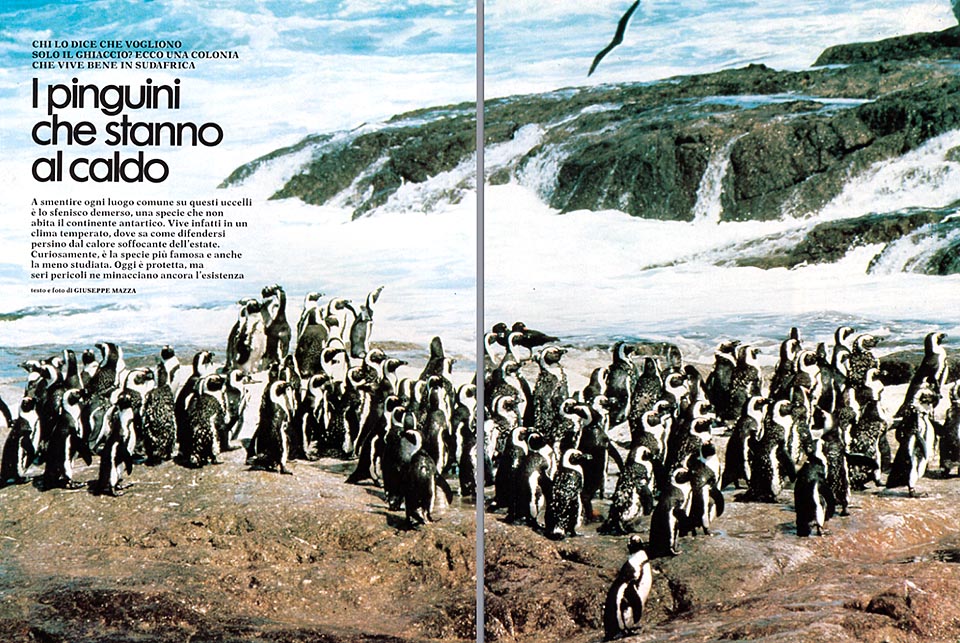 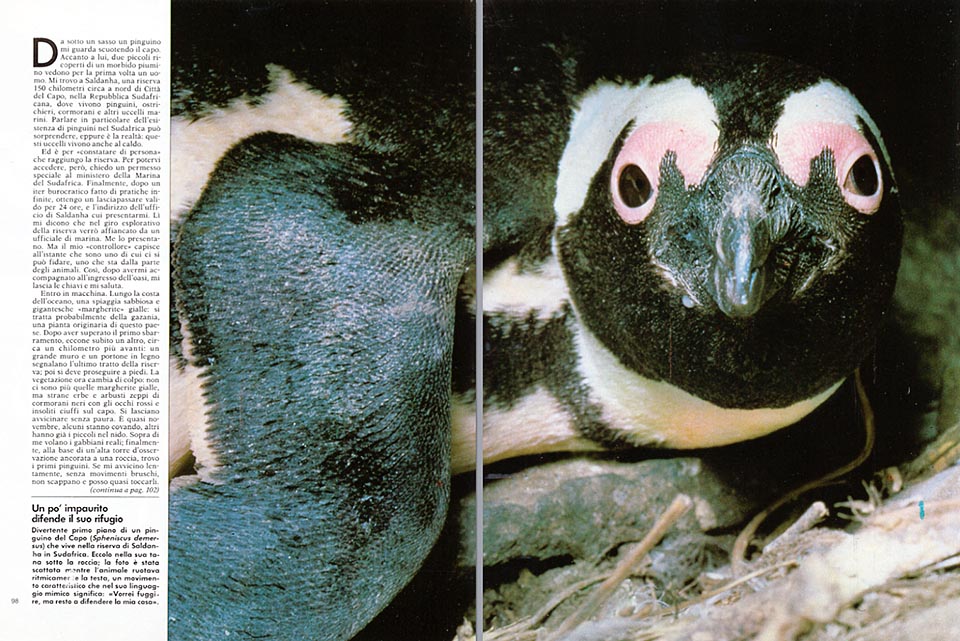 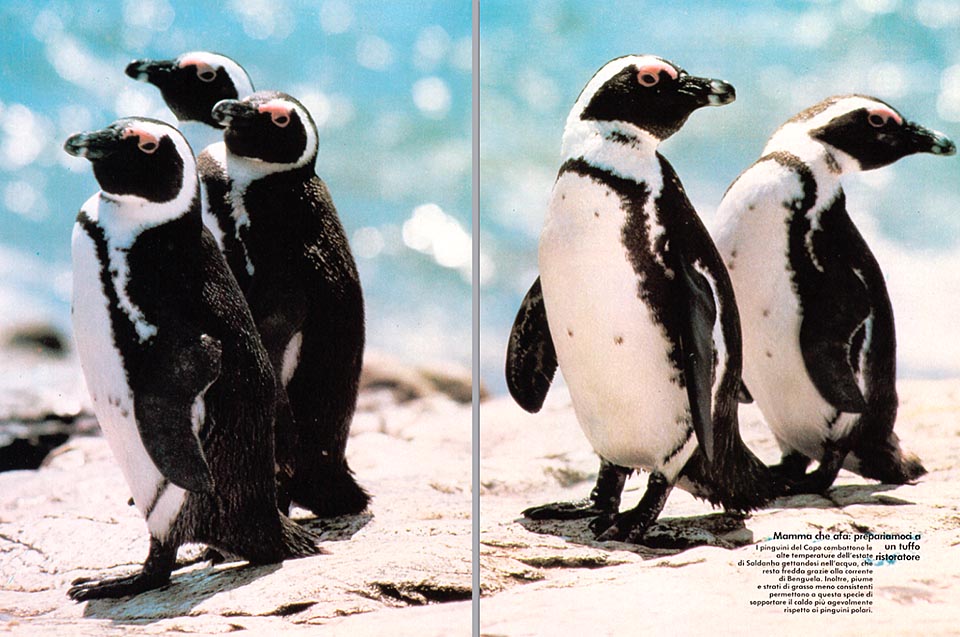 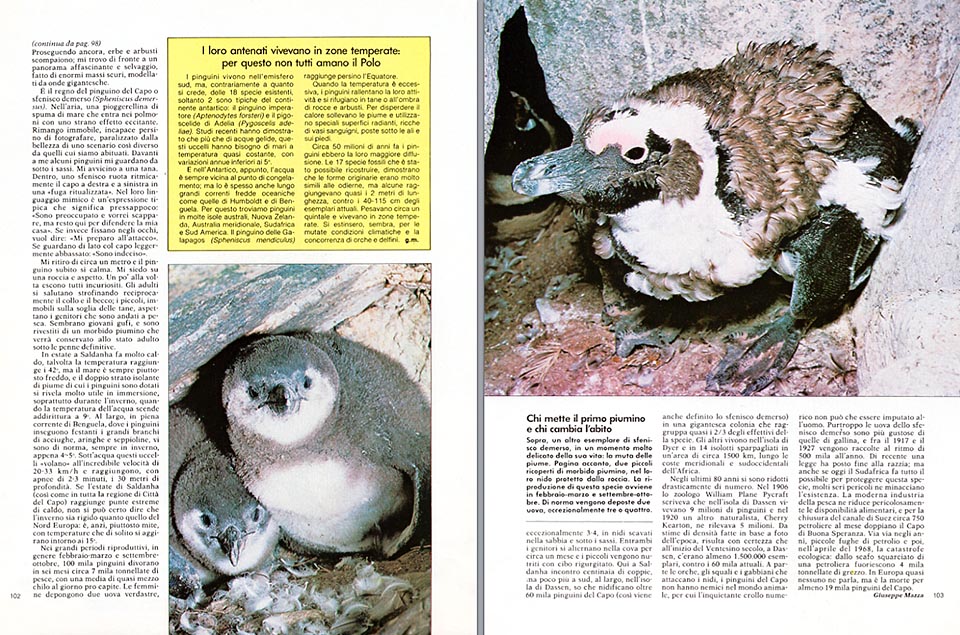 From under a stone, a penguin looks at me, shaking the head. Close to, two young, covered of a soft plumage, see a man for the first time.

I am in Saldanha, a reserve about 150 km north of Cape of Good Hope, in South Africa, where live penguins, oyster catchers, cormorants and other sea birds. It can be astonishing to talk in particular about the existence of penguins in South Africa, but it’s true. These birds live also in the warmth. And it’s rightly to verify this “personally”, that I have reached the reserve.

I had to ask for a permission from the South African Ministry of the Navy, and finally, I hold a pass valid 24 hours, and the address of the office in Saldanha, where I have to report. Once there, they tell me that during the exploration tour in the reserve, I will be accompanied by an officer of the Navy. They introduce him to me, but my controller understands at once that I respect the nature, he can rely upon me, and after having taken me to the entrance of the oasis, gives me the keys, which are to be returned, later on, to the office, and says goodbye.

I enter with my car. Along the coast of the ocean, a sandy beach and huge yellow daisies: they are Gazania, a native species, which has become, in our areas, a garden plant.

Passed the first barrier, I find another one, about one km ahead: a huge wall and a front-door, then I have to proceed by walking.

The vegetation changes suddenly. The yellow daisies disappear. Strange herbs and shrubs crowded of black cormorants with red eyes and unusual tufts on the head. They don’t get scared if approached. It’s almost November, some are brooding, others have already the young in the nest.

Seagulls are flying over. At last, at the basis of an observation tower fixed on a rock, I find the first penguins. If I get closer slowly, without any sudden movement, they don’t run away, and I can almost touch them.

Going ahead, herbs and shrubs disappear, I am facing a fascinating and wild view, with huge dark rocks, shaped by enormous waves. It’s the kingdom of the African Penguin (Spheniscus demersus).

In the air, there is a drizzle of sea foam, which enters the lungs with a strange exciting effect. I stand motionless, unable, even, to take photos, paralysed by the beauty of such a different scenery. In front of me, some penguins look at me from under the stones.

I get closer to a den. Inside, an African Penguin rotates rhythmically the head to the right and then to the left in a “ritualistic flight”.

In their mimic language, it’s a typical expression, which means, approximately, “I am afraid, and I would like to run away, but I remain here to protect my house.” If, on the contrary, they look at you in the eyes, that means: “I am preparing myself for attacking.” If they look on the sides, with the head lightly bent, “I am hesitant”.

I withdraw of about one metre, and the penguin quiets down at once.I sit on a rock, and wait. Slowly, all of them, curious, come out. The adults salute rubbing the neck and the beak, young, motionless, on the threshold of the house, wait for the parents which have gone fishing. They look like young owls, dressed of a soft plumage, which will be maintained, when adults, under the final fins.

In summertime, in Saldanhs, they can reach the 42 °C, but wintertime is mild, with temperatures of around 15 °C. The sea is always rather cold, and the double isolating layer of plumes reveals very useful when diving, especially during wintertime, when the temperature of the water goes down, even to 9 °C, and in the open sea, in the full stream of Benguela, it can reach 4-5 °C.

Recent studies have proved that penguins need, more than gelid waters, seas with constant temperature, with annual variations inferior to 5 °C. Condition satisfied in Antarctica, where the water is always close to the freezing point, and in the large stream of Benguela, where the penguins, joyful, pursue the huge herds of anchovies, herrings and small cuttlefishes. Under the water, they “fly” at the incredible speed of 20-33 km per hour, and reach, with apneas lasting 2-3 minutes, depths of 30 metres.

During the great periods of reproduction, usually February-March and September-October, 100.000 African Penguins eat in six months about 7.000 tons of fish, with an average of almost half a kilo, daily, for each one.

Females lay two greenish eggs, exceptionally, 3 or 4, in nests dug in the sand and under the stones. Both parents alternate in the sitting for about one month, and young are nourished with regurgitated food.

In Saldanha, I meet hundreds of couples, but, more to the south, off Dassen Island, nest about 60.000 penguins in a gigantic colony, which assembles almost the 2/3 of the members of the species.

The others live in Dyer Island and in 14 islets, scattered in an area of about 1.500 km, along southern and south western coasts of Africa.

In the last 80 years, they have drastically reduced their number. In 1906, the zoologist William Plane Pycraft was writing that in Dassen Island lived 9.000.000 penguins and in 1929, another naturalist, Cherry Kearton, was counting only 5.000.000 of them. From estimations of density done on the basis of photos done at the time, it transpires that at the beginning of the twentieth century, in Dassen, there were at least 1.500.000 specimen, against the actual 60.000.

Apart grampuses, sharks and the seagulls which attack the nests, the African Penguins do not have enemies in the animal world, and the alarming numerical fall is due only to the man. The eggs are tastier than those of hens, and between 1917 and 1927, they were were collected with the rhythm of 500.000 per year.

Recently, a new law has finally stopped the foray; but, even if, nowadays, in South Africa all possible is done to protect the species, many serious dangers threaten its existence.

Modern fishing industry reduces drastically their alimentary reserves, after the closing of Suez Canal, about 750 tankers per month transit by the Cape of Good Hope. Along the years, small leakages of oil, and then, in April 1968, the ecological disaster: from the torn hull of a tanker, came out 4.000 tons of crude oil.

In Europe, almost nobody talks about this, but it’s the death of at least 19.000 African Penguins.

Spheniscus demersus : the penguins living in warm climate was last modified: May 23rd, 2019 by Giuseppe Mazza