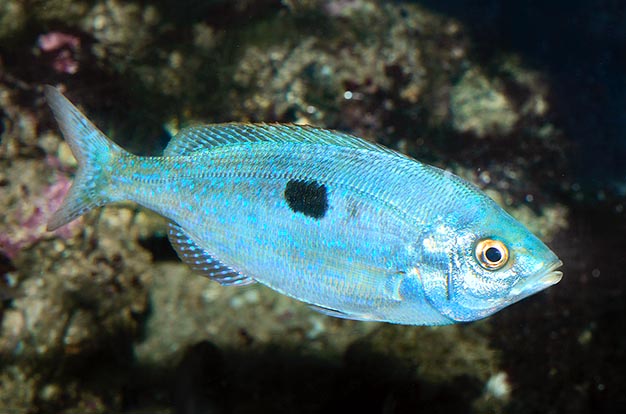 The Blotched picarel (Spicara maena) has much variable livery after sex, age and season © Giuseppe Mazza

The Blotched picarel (Spicara maena Linnaeus, 1758) belongs to the class of Actinopterygii, the ray-finned fishes, to the order of Perciformes and to the family of Sparidae.

The name of the genus come from the Latin “spicare” = having the form of a spike.

The name of the species is the Latin name of the fish, which was considered as shoddy, good for poor people.

It is common all over the Mediterranean, with small presence in the Black Sea. After Gibraltar Strait, it has colonized, on one side, the Spanish, Portuguese, and French up to Brittany coasts, on the other side, the African coasts up to the Canary Islands.

Even if it can go down up to 130-150 m of depth, the blotched picarel live usually as gregarious, at less than 30 m, in the Posiidonia (Posidonia oceanica) prairies and on the muddy or sandy seabed.

It reaches the 15-20 cm in the females, and the 20-25 cm in the male. It is a polymorphous species in the colour and in the form having a variable geometry, according to the age and the sex. The young are more slender, and the males, besides the normal livery, extol the nuptial one, not to forget the fact that it is a protogynous hermaphroditic species; that is, the females change of look while growing up and become males.

This has created a host of synonyms and, even more, of colloquial names in the various zones where it lives. The only sure point is the black quadrangular dot on the sides, united with the fact that the length of the head is less than the height of the body. 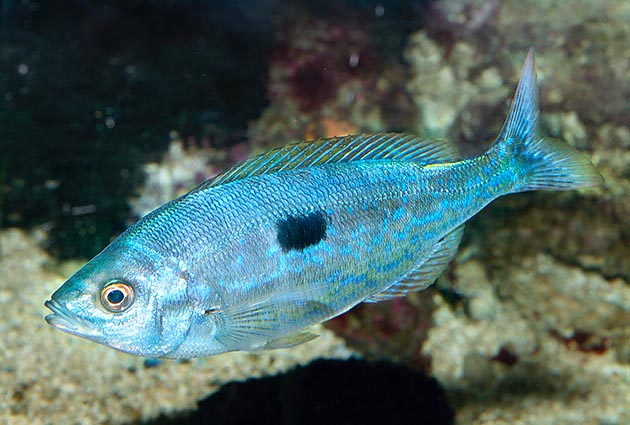 A fast identifying item is the showy black dot on the sides. Shoddy flesh © Giuseppe Mazza

The general colouration, which changes after the age, the sex and the season, tends to the blue with bright dots, more or less intense, and yellow decorations on the males during the reproductive period. Finally, during the night all liveries turn, marbled, to the greenish grey for camouflaging with the seabed, and fades, to almost disappear, even the dark dot of the sides.

The diameter of the eye is large, but less than the interorbital and preorbital space. The mouth is small and protractile, with tiny teeth on the jaws and on the vomer. On the front of the upper jaw, we note 6-7 bigger and sharper teeth, turned inward, for seizing the preys. The operculum is wide and ends in a blunt tip. It has a dorsal fin, high and uniform with spiny rays, long about the half of the fish, and a shorter symmetrical one with two or three spiny rays. Forked caudal, pointed pectorals and short ventral fins with axillar scales.

The blotched picarel nourishes mainly of planktonic crustaceans, but also of small organisms it finds on the seabed. Once reached the sexual maturity, between 9 and 10 cm, it reproduces between August and October in the posidonia prairies, which the males tear off till when they form a circular nest. The females, packed with eggs, stick them anywhere and the same are immediately fecundated.

The blotched picarels are abundantly fished with the trawl nets, but seen their flesh, flabby and tasteless, they are not, by sure, a prized species. Usually, they are consumed marinated or fried. The vulnerability index of this species is of 45 over 100.