Cultivated since remote times, its exact place of origin is not known, it is thought to be tropical Asia or Oceania.

The name of the genus is the Greek one, “σπονδιάς” (spondias), of the plum, due to the resemblance of the fruits to those of the Prunus domestica; the specific name is the Latin adjective “dulcis, e” = sweet, pleasant, with obvious reference to the fruits. 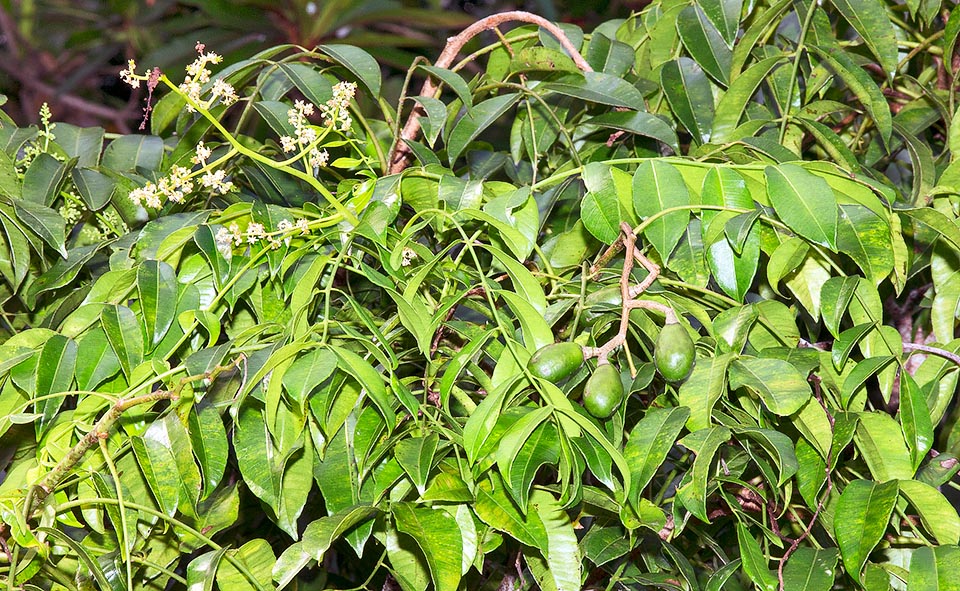 The Spondias dulcis is a deciduous tree, for short time, very ramified, 10-30 m tall, that seems to be native to tropical Asia or Oceania © Giuseppe Mazza

The Spondias dulcis Parkinson (1773) is a deciduous tree, for a short time, very ramified, 10-30 m tall, with erect trunk, cylindrical, of 20-50 cm of diameter, with smooth or slightly fissured greyish or pale brown bark and from whose wounds exudes a very viscous resin; often are present at the base tabular roots (flattened roots similar to buttresses that contribute to the support of the large trees). 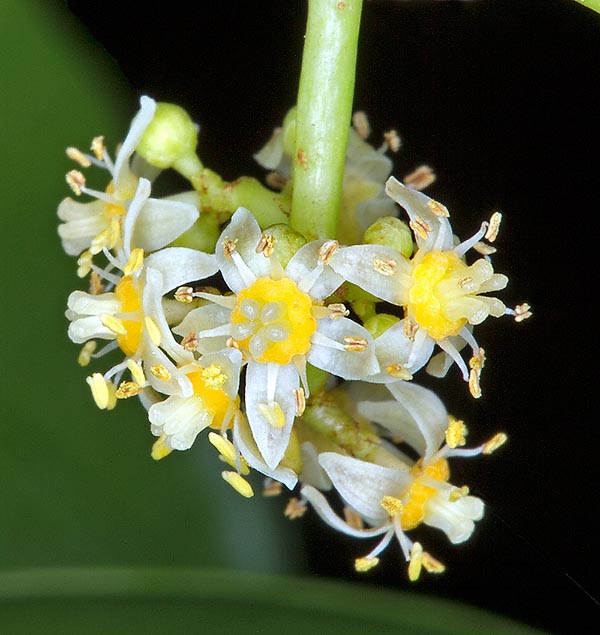 The tiny flowers can be unisexual of hermaphroditic with 5 white ovate petals, 2-3 mm long © G. Mazza

The leaves, grouped at the extremity of the branches on a 6-15 cm long petiole, are alternate, imparipinnate, 20-60 cm long, formed by 9-25 oblong-ovate leaflets with pointed apex and entire or slightly toothed margin, 6-11 cm long and 2,5-4,5 cm broad, of intense green colour.

The inflorescences, that appear before the leaves at the apices of the branches, are hanging panicles, up to 50 cm long, bearing several tiny flowers unisexual as well as hermaphroditic, with 5 white ovate petals, 2-3 mm long, retroflexed, 10 stamina and ovary with 5 styles.

The fruits are globose, ovoid or oblong drupes, 4-10 cm long and of 3-8 cm of diameter, of initially green colour, then orange yellow when ripe, with yellow fibrous pulp, with sourish to sweet taste, presenting a high contents of vitamin C; the endocarp, woody, of 1,5-2,5 cm of diameter, has several fibres or straight or curved spines and contains up to 5 oblong flattened seeds, of 1,5-2 cm of length, of pale yellow colour. Some dwarf varieties have been selected.

It reproduces by seed, that doesn’t have a long-lasting germinability, in draining loam rich of organic substance maintained humid at the temperature of 25-28 °C, with quite variable germination times, starting from one month, and first blooming from the third-fourth year of age; it propagates also by woody as well as apical cutting, air layering and grafting. Species of fast growth suitable to the tropical and humid subtropical climates, as not resisting to long periods with lowest temperatures under the 10 °C, with rainfall distributed throughout the year in order to grow at the best; in the climates with long dry periods it is to be reularly irrigated, at least during the first years of planting. It requires an exposition in full sun, for an abundant fructification, excepting during the first 2-3 years of age when it needs a partial shade, and is not too particular about the soil, neutral or alkaline, provided well draining; due to the fragility of the branches it is to be located in a place sheltered from the strong winds. In adverse climates it can be cultivated in capacious containers, where even young plants can produce fruits, to be sheltered during the coldest months in a protected location, at the maximum possible luminosity and with lowest values of temperature preferably over the 15 °C. It is to be utilized a draining loam rich of organic substance regularly watered, but without stagnations, and fertilized, during the vegetative period, with a product balanced with microelements. 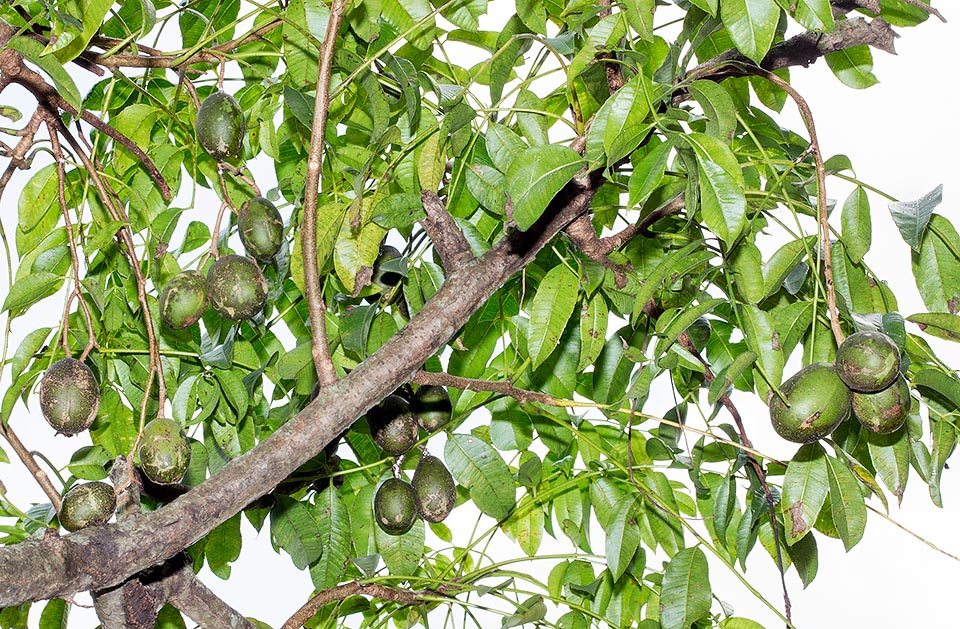 As the scientific name says, the edible fruits, rich of vitamin C, seems plums. With leaves and bark they are employed in the traditional medicine © Giuseppe Mazza

The unripe fruits, particularly bitter and with crisp pulp, are utilized in salads, for preserves and for flavouring various dishes, the ripe ones, soft and sweet tasting or slightly sour, are consumed raw or utilizied for preparing jams, ice-creams and drinks, even alcoholic; in some places the young leaves are consumed raw or cooked as vegetables. Fruits, leaves and bark are utilized in the traditional medicine for various pathologies.